On an Angel's Wings

f all the legendary creatures presented when Magic: The Gathering Commander was released a few weeks ago, it was an Angel that stole my heart. Basandra, Battle Seraph brought together a mix of colors and ideas in ways that delighted me, and we spent an entire article showing off some of her potential. 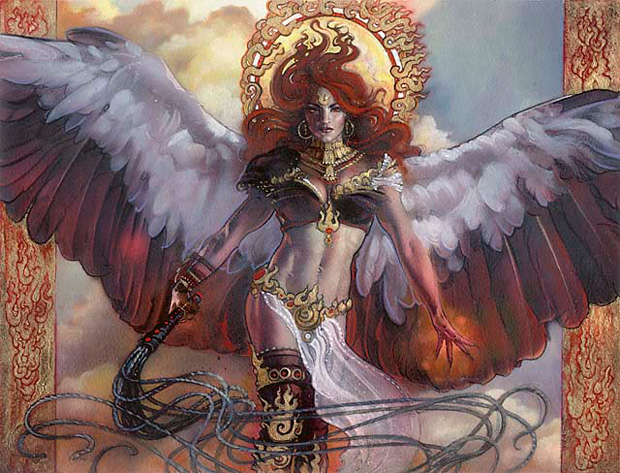 Today, I'd like to revisit where we left off, complete a deck list, share some experiences from playing it, and open the floor to making final improvements. It sounds simple, but nothing's easy when dealing with 100-card singleton and a world of "anything can happen" gaming.

I hope you're up for a wild ride.

By putting together all of the modules discussed last time, we end up with a skeleton deck that looks something like this:

Obviously, just 28 cards are a few too few for a Commander-format deck. The first module we should visit is building out a sweet Equipment suite.

The entire family of Sword of Noun and Noun is probably an overused group, but if we're going to play defense I'd like to have the most protection available. Similarly, Umezawa's Jitte and Batterskull provide some heavy lifting, gaining life and otherwise keeping you going a little longer.

Manriki-Gusari is the first really interesting Equipment here. I've found that there is already something lying around to be broken, and sometimes you really want to just bust up a Sword. Since I didn't want to face one myself I thought it appropriate to add one here.

Finally, Sunforger is a fun little number straight off the plane of Ravnica. It's a long-time favorite card of mine, and I knew that adding it in would let me add a small set of effects to toy around with. While it doesn't circumvent the usual spell-stoppage of Basandra, finding a spell we want to cast before or after combat (on anyone's turn!) is still on the order of epic.

Welcome to beautiful Shenanigan City! During your stay, let Sunforger find all sorts of in-the-moment amenities. Grab the Reins lets you taste a sample of what everyone in the game has to offer, while Master Warcraft lets you play the role of an executive chef, cooking up exactly what you want most. Order // Chaos even lets you season that to taste.

Security is a high priority here, and Shenanigan City is proud to offer some of the best. Into the Core and Return to Dust put artifacts or enchantments into exile–no repeat offenders here! Reiterate and Reverberate ensure that no one player has all the fun to themselves. And our guest sheriff, Hollywood actor and celebrity Wild Ricochet, is a high-level black belt in martial spell arts.

And that's not all! You can find all sorts of unique landmarks are you tour the city:

Everywhere you go it's a pleasant surprise! Of course, visiting the city should put you in touch with a few more of our fulltime residents:

Brion Stoutarm and Jor Kadeen serve wonderful purposes, the most important of which is that they can double as a substitute commander is the need arises. Jareth and the Mana-Charged Dragon (a great name for a children's book, I must say) are heavy hitters that can do double duty on both offense and defense. White Sun's Zenith and Decree of Justice fill the spaces between, and Junk Diver and Myr Retriever will ensure that anyone actively disarming our police force will have to work hard to make that happen.

With the final modules filled out, this is the deck list I finally came to:

1 Crescendo of War 1 Vow of Duty


Since this was my first draft, and full of awesome but untested ideas, I thought it would be good to run it through several games to see how things would play out. Instead of a focus on the upside of things, the follow modules look at handling something when it doesn't go quite to plan.

Since our goal is to get these giant colossi of combat pointed at other players, I'm not sure that we would want to try something like Hallowed Burial or Final Judgment. After all, we like our own creatures and need them to stick around too!

A common card type that I didn't find exciting for our deck are those descended from Swords to Plowshares. Path to Exile, Iona's Judgment, and Exile are all ways to keep something ginormous in check without breaking up our defensive plan. If you find that there are just too many big creatures around, these cards can help you push back.

In general, our deck came out of the gates pretty slow. Sometimes this worked to our advantage as other players ignored us while we set out our front line. Quite frequently, thought, it felt like we aren't able to drop haymakers when the others started. We could still do most of what we wanted, but feeling like you're one mana short, and a day late, can be frustrating.

White has a few effects that can let us come tearing out of the gate faster, or at least keep us from falling too far behind everyone. Land Tax and Weathered Wayfarer both provide some heavy lifting in the land department, and cards like Tithe let us keep our land-get agenda hidden. Boros Signet and Everflowing Chalice can help us have mana even if all the lands fall away.

If you feel like your mana needs a little more oomph, those are the kinds of cards to consider.

Compared to some other decks I've played, ours was able to break up combos reasonably well thanks to Return to Dust and Into the Core. The act of exiling something made it very difficult to bring back again, though one tricky green-blue deck had Riftsweeper for just such a circumstance.

One of the new cards featured in Magic: The Gathering Commander is Stranglehold, an enchantment built specifically to stop this type of activity. It can be the right type of card if you find too few of the turns taken are yours. Additionally, Red Elemental Blast and Pyroblast can put an immediate halt to something blue that's creating the extra turns. I think we're okay in our case.

As much as it's disappointing to have the world flip ends, I've seen some pretty gnarly results from Living Death, and it usually means the game is ending sooner. I guess I have a soft spot for games that go quick.

Many players like to use catch-all anti-graveyard cards, like Relic of Progenitus and Bojuka Bog, since a well-stocked graveyard can be a much richer source of strength than a library full of stuff. We didn't include any of these types of cards, but if the graveyard seems to be a place of treasure and terror more than where things go to die then switching in a graveyard reset or two can make sense.

So where does that leave us? Well we have a deck that can be adapted to suit how you see things, and it's a charmer of theme: combat chaos. What do you see? How would you change things up? I've given you all of my thoughts and insight, now it's time for me to see more of yours! Share your "module updates" in the forums or by email and I'll be sure to show off the best of alternatives out there!

This week's poll is related to the two you voted on last week.

Sealed is how most of you break out the latest set, but Draft and plain ol' pack busting is running a neck-and-neck tie for second. I've been playing a lot of Winchester Draft for Magic 2012, and I find it's a good compromise between wanting to open as many packs as fast as possible (the classic way I used to satiate my set excitement), wanting to engage in a little Limited battling, and only having a friend or two handy at any given moment. I recommend trying it!

I was also pleasantly surprised to see how well received the "share Magic" decks were. I definitely heard from those of you who weren't interested or didn't need that type of information, but rest assured that aside from the promised complete set of lists, this overview won't be a regular feature.

The poll this week is a hybrid of the two ideas:

Did you or your friends learn Magic through Sealed? What was that experience? After you sound off about adapting the Basandra deck, share your thoughts on Sealed as a tool of introduction as well!

Join us next week when others get a little thirsty!