am a lucky guy.

The guys in my playgroup love a good game of Magic. While multiplayer games dominate our Thursday nights, we generally try to dedicate one night a month to Draft or some other Limited format. Many Thursdays revolve around drafting Josh's Cube that I described a couple of weeks ago. Many other Thursdays see us "Prerelease" the latest set. We generally run a small Sealed tournament using the most recently released set the Thursday after the release. Our once-a-month Thursday Limited events are pretty packed.

Then Modern Masters came along. 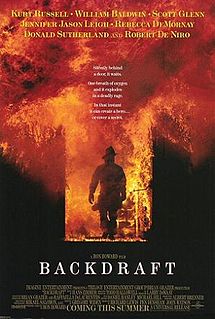 For the uninitiated, Backdraft is more than just a 1991 Kurt Russell movie.2 Backdraft is a bizarre form of drafting, where you draft a pool of cards for someone else. It is pretty much identical to doing a regular draft, except someone else is going to use the cards you drafted to build their decks. The key is that you are trying to leave that person with the worst pool of cards possible, since you may be playing against them at some point in the tournament.

This is a fun format, but it isn't often seen, since for most drafts, everyone pays for the three packs they are going to open in the draft. It feels horrible to open great cards and pass them on to someone else, keeping only the worst card in the pack. Who wants to keep a bunch of cards that someone else thinks would create a terrible deck? The thought of backdrafting a box of Modern Masters would be abhorrent for most drafters.

Lucky for me, this was George's box. No one had to buy in, and George would be keeping all the cards at the end of the night. Whether I open a Sword of Fire and Ice or Tribal Flames doesn't matter; I'm not keeping the cards.

The basic strategy is to leave someone with a lousy pile of cards to play. While this doesn't sound too difficult, many players simply assume that they should just choose the worst card in the pack and move on. There is a little more to it than that. You need to remember that at some point, you are going to be forced to draft some good cards. Simply picking the worst cards available isn't enough.

Spread the love. You want to draft cards from every color in relatively even amounts. This will either force someone to run a subpar two-color deck or try to play several colors and just good stuff. Also consider cards that have double mana symbols. Splashing Eternal Witness is much tougher than splashing Greater Mossdog.

Bombs are even bombier. That overpriced bomb isn't so overpriced in this format. With card pools that have limited synergy, games will take a little longer, and individually powerful cards that are a bit overpriced start to look good. That bomb that costs seven or eight is probably a little better than you think when you realize that synergistic decks are going to be difficult to find. This leads directly to the next topic...

Avoid synergy. If cards work well together, do not pick them. Someone in the group3 picked two Empty the Warrens, forgetting he had already picked a Grinning Ignus. This combination produced multiple wins for the deck that went 3–0. This can be difficult in Modern Masters packs, but staying aware is the key.

Mana-fixing can spell your doom. All of your efforts to make the cards in your pool difficult to cast can be lost if you take good mana-fixing. The ability to ramp up or get a land in that fourth color can make a poor pool into something that wins games.

Counting the cards remaining in the packs can be a great benefit. If a pack that you are looking at has eight cards in it after you picked your card, you are probably going to get the best card of those eight cards. Knowing the color of the card you are likely getting allows you to use that as a consideration when picking the next cards. If you know you are getting an amazing white card, you'll be even more determined to avoid the moderately good cards.

Thankfully, with my playgroup, Backdraft in and of itself just isn't crazy enough. In our eight-man, we opted to add a couple of layers to the craziness. After drafting, before the pools were passed to their hapless victims, we chose teammates. While we were going to choose randomly, we chose the person sitting opposite to us as our teammate. After moving to sit next to our teammates, we passed our sealed pools to the person sitting next to us who wasn't our teammate. The teammates could then look at each other's pools and opt to trade pools at this point. We figured this would allow the players to choose pools that matched their play styles.

The next level of crazy was the scoring. Wins were 3 points and draws were worth 1, just as they are in any tournament. However, every time the player who built the deck with your drafted pool lost, you earned 2 more points, and if he or she drew, you earned 1 point. This sounds complicated, but I think a quick example makes it easy to understand.

I was partnered with Harry. In the first round, Harry lost his match, and Jesse, who built the deck using Harry's draft pool, also lost. Harry earned no points from his game, but earned 2 points for Jesse's loss. I won my first game, but Tyler, the guy who was using the pool I drafted, also won. I earned 3 points for my win, but nothing for Tyler's win. Our team earned 5 points in the first round.

In the end, you wanted to win all your games, and you wanted the player who was using your card pool to lose all of his or her games. It made for some interesting cheering!

With four teams, we opted for a round robin, with the highest-point player on either team playing each other. Any ties were solved with a die roll.

Let the Insanity Begin... in Just a Second!

The last time I wrote about a draft, many of you wanted to see the pool, to get a chance to compare your build to mine. I took notes of the pool I was given so I could list them for you. Based on those notes, I've listed forty-four of the forty-five that were drafted. I have no idea which card I missed.

Ah, the dreck! I broke the cards down into color to determine what I had that was worth playing. Once I saw Maelstrom Pulse and Worm Harvest, I was pretty sure that I was going to play black and green. While the green wasn't spectacular, it did include the Greater Mossdog, which I hoped would get me to my Worm Harvest quickly. I do like a Mulldrifter as well, so blue as a splash seemed like an option.

The real joy was the number of artifacts. While the Arcbound Wanderers would not be exciting in a two- or even three-color deck, the rest of the artifacts seemed just fine. The result was this:

1 Walker of the Grove
19 Cards

1 Walker of the Grove 1 Horobi's Whisper


The two Arcbound creatures, the Chalice, and the Worm Harvest, would have been better off on the sidelines. I never had the opportunity to play the Worm Harvest, since I didn't have enough ways to fill my graveyard with land. The few times I did manage to get a few lands into the graveyard involved the Greater Mossdog or Syphon Life, but the Worm Harvest never appeared.

Without those cards, I expect I could have gone in a totally different direction. My land count is high, specifically because of the Worm Harvest. White and red both offer a handful of interesting options, but I was drawn in by the allure of repeated Worm Harvests. Ooooh, shiny!

In spite of the limitations, the deck did perform admirably. I won the first match against Jesse, 2–1. He blew me out quickly in the first game, had mana difficulties in the next game, then I was able to cast the Earwig Squad with the prowl. I took his three strongest fliers, which eventually allowed me to win a long battle for air superiority.

The second match, against John, saw me win 2–1 again. Once again, my opponent won the first game by playing better cards and using his cards more effectively than I did. I won the second game because he was missing Islands. I won the decider with a Latchkey Faerie carrying a Bonesplitter. I needed both the Maelstrom Pulse and Horobi's Whisper to clear away potential blockers, but an unblocked 4/2 creature gets the job done quickly enough to bring me to the last round.

The third match pitted me against Tyler. We were not surprised to be facing each other at this point. Whenever our group does a standard draft format, we are usually battling it out for last place. When we do something silly, like a Crap Cube draft or Backdrafting Modern Masters, we meet in the finals. This time, we had swapped card pools and both managed to go 2–0. This match would count for 5 points since the winner would get 3 points for winning and 2 points because his card pool would lose. Tyler's deck was clearly better than mine. He cast Empty the Warrens in each game. The first game, he cast it with a storm count of four, as the Grinning Ignus laughed at me as he cast it again and again. The second game involved a turn with several regular spells and the Goblins once again hitting me in numbers too big to stop. 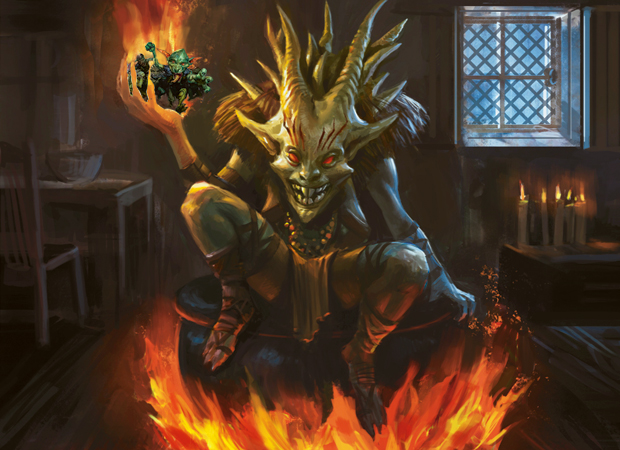 Harry and I managed to go 4–2, while our decklists earned us another 6 points. Those 18 points were enough to end in a tie for 1st! Harry was the all-star for us, earning the win in the last round that we needed to get the tie.

Between playing the games, cheering for the players who were playing against the pools we drafted, one player's braggadocio over his ability to choose lousy cards, and determining what had to happen in the final round for various teams to win, everyone had a good time. Mix Magic, a fun draft, and a bunch of crazy friends and good times are bound to happen!

1: I do not recommend this. You just don't get enough of the cards to build a decent version of any of the possible archetypes. With the decks being thirty-card decks, I managed to win out with a "double Dampen Thought and other splice card" mill deck. (return)
2: De Niro and Donald Sutherland do excellent work and the FX with the fire was cutting edge… for 1991.(return)
3: Names were omitted to protect me from looking like an idiot. (return)