or those of you who haven't yet met me, I'm a big guy. While I'm not as tall as the indomitable DailyMTG.com Content Manager Trick Jarrett, and easily a head span shorter than Rules Manager Matt Tabak, I am sufficiently sized to administer a specific type of embrace to close friends: a bear hug. Wrapping my arms about friends, picking them off the ground, and happily shaking them in the air is the surest sign of deep, personal appreciation I have for someone. 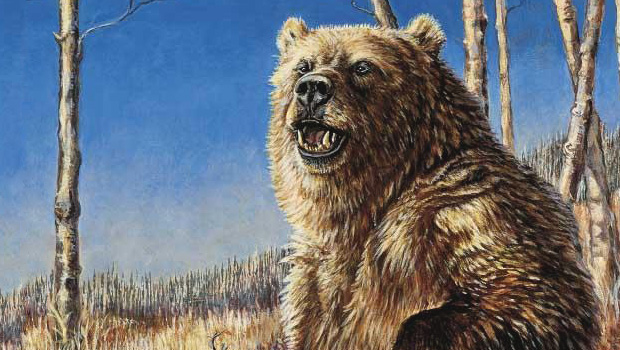 It's unfortunate this isn't a more popular greeting. I think these types of hugs are awesome.

What makes a bear hug different isn't the embrace itself, but the application and execution. You aren't expecting, or even desiring, a crushing squeeze of friendliness, but there it is all same. And odds are that, even if you didn't want it initially, there's something endearing about being catapulted skyward in a friend's arms that changes your perspective on the experience.

So what's this malarkey on hugging have to do with Magic?

Let's talk Commander for a moment. While I don't spend a lot of effort on classifying "deck archetypes" for the format—I'd much rather just grab things I like and jam some games—there are certainly writers out there who do. One popular archetype is called "Group Hug."

Group Hug is generally defined by the following principles:

Commanders like Phelddagrif, with cards like Spectral Searchlight and Nullmage Advocate, are hallmarks of this type of deck. Some of you really enjoy this, either playing as or with it. Here's a sample, but outdated, Group Hug list judge Dale Lovelace shared:

1 Arbiter of Knollridge 1 Ghosts of the Innocent
61 Cards


This is the most archetypical list I found, and it's plan is to strictly be a helpful Group Hug player. There are no substantial win conditions (theoretical Phelddagrif beatdowns aside), and virtually all of the potential interactions are favorable and helpful for everyone else. Games where this deck is in use will feel warm and comfortable. Nobody's in serious pain, at least without something seriously powerful kicking in.

Now throw this out the window. Kick it to the curb. Let it all fall away. I want to talk about a twist on this idea that came up in discussing Commander with Andrew Magrini, the same @a_magrini mentioned in last week's Ghave finale. 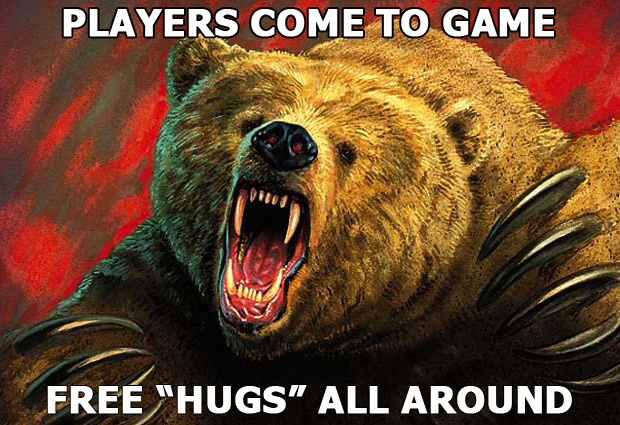 Bear Hug is related to Group Hug, but there's a lot less asking involved. Group Hug is similar to real group hugs. "Do you want in? Okay, get over here! Here you go!" It's endearing and sweet and thoughtful.

Bear Hug is similarly comparable to its real-world named hug too: you're getting this awesome thing whether you asked for it or not. No passive waiting. No careful political considerations. No guessing who's really on the top or bottom of the current game state. Just big, powerful embraces delivered to everyone, repeatedly. And sometimes they hurt, too.

You know how Phelddagrif works: ask around for things people need, then grant them what Phelddagrif can do. It's the most ordinary and exemplary Group Hug commander pick. Braids, Conjurer Adept is a choice-based Gate to the Æther for everyone's hand. While you can choose to skip playing something, most players I know will gladly dump anything out for free. This is close to, but not quite, Bear Hug.

Karona, False God is a must. It doesn't give an option to be shared, it simply says, "Here. Take this. Enjoy it." It provides an imperative to do something, and puts the tool right into your hands. This is what Bear Hug is about. It's not sharing for caring, it's sharing because I want you have this.

Howling Mine, Font of Mythos, Temple Bell, Kami of the Crescent Moon

These are examples of the strong overlap between Group Hug and Bear Hug: all four of these cards require everyone to draw extra cards. There isn't a choice or option, and no one asks for permission to do so. While it usually feels good, Bear Hug is focused on that "require" angle. It's a positive, but it's also forced onto everyone. In fact, there are many more cards that require players to draw:

Seizan, Perverter of Truth isn't something you'd find in Group Hug decks, but it is guaranteed card draw for everyone. I had some strange looks cast my way when I traded for a premium version of this Kami. I'm looking forward to receiving more when I cast it.

While you do see Mana Flare—and it's Modern cousin Heartbeat of Spring—in Group Hug, it's really Spectral Searchlight that defines a Phelddagrif for Commander. Mana Flare just turns on the faucets, making everyone tap for additional mana. Before Magic 2010, if you couldn't use all the mana you tapped for you felt "mana burn" and suffered damage equal to the leftover mana. While you can't get burned anymore, you can still give everyone too much mana (if there is such a thing).

Vision Skeins vs. Liliana of the Veil, Fleshbag Marauder, Barter in Blood

While only positive effects are the focus of Group Hug, Bear Hug comes with great pressure too. Liliana of the Veil isn't as disheartening when everyone is drawing extra cards, but the others certainly aren't anything like a Group Hug affair. While you're pushing everyone to do things, it's also fine to keep some checks in place as long as everyone gets the same chance to be selective.

Horn of Plenty vs. Aku Djinn

Having cards that are equally helpful to you is good, but Bear Hug goes further. Aku Djinn won't win any awards for being awesome today, but making everyone's creatures larger is definitely an awesome thing to play with. Those +1/+1 counters can be particularly meaningful if you happen to have an Experiment Kraj floating around in your deck.

If you think you're starting to catch the drift, here's an initial, rough pass at a Bear Hug deck using Zedruu the Greathearted as its commander:


It's very messy but that's fine: this was for illustrative purposes. Unlike Group Hug, Bear Hug comes with both teeth and claws. You'll be pushing cards, mana, and free permanents for everyone, but you're going to help maul others along the way, too. Instead of sitting back and constantly checking the game for changes, you're the one creating and pushing changes through and joining in on that fun yourself.

It's not exactly everything I want in a Commander deck, but it is much more enjoyable for me to consider playing than Dale's win-devoid Group Hug. I'm definitely excited to see where this goes!

I didn't expect anything different then these results, but you know what they say about people who assume! 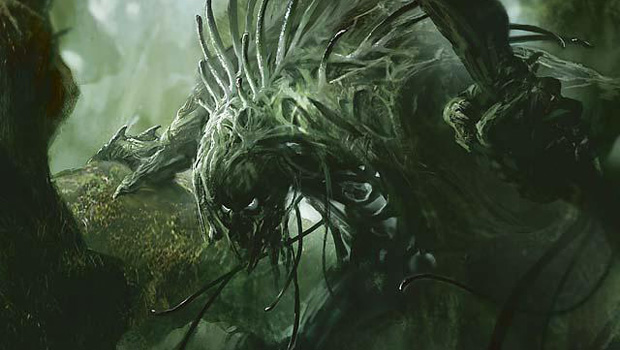 With the demand for another Serious Fun build firmly in place, now seems like a better time than ever before to start! Our Ghave, Guru of Spores experiment turned out to be a smashing success, both in terms of how we ended up there as well as how much fun the deck is to play. Naturally, I'd like to find an even better result this time!

Let's start at the same place we did before: choices of commanders. I'd really like to have a fully fleshed Bear Hug deck to break out, one that includes ideas from you (Bear Hug wouldn't be without Mr. Magrini!) and isn't just an existing type of deck rehashed. Our available commanders will obviously have been done before, so let's get the boring part out of the way now:

Turning these commanders into Bear Hug leaders is an original exercise we'll tackle together. Each of them can share something with others, or enjoy sharing things others have. I also feel that multiple colors is critical, which is why some obvious legendary creatures weren't mentioned: Braids, Conjurer Adept; Seizan, Perverter of Truth; and Kami of the Crescent Moon. These will get picked up by whatever commander is chosen if the color is appropriate!

Join us next week when we get into the holiday spirit with ten (or more) lords a-leaping! See you then!