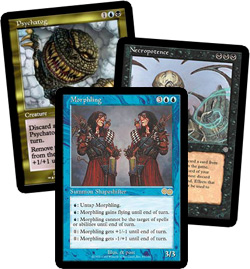 Not that great, really. danger of discussing what the “good” cards are from the most recent set release is that you inevitably look like a chump. Magic history is lined with riotously wrong predictions from experienced players who missed the format-shattering power of Psychatog, complained that both Donate and Necropotence were junk rares, and called Morphling “a bit expensive for what it does.”

If you’re a newer player who doesn’t know what those cards do… Count yourself lucky. The rest of you can stop shuddering now.

But still, even though they’re frequently utterly wrong, Magic players love set reviews.* They’re rabid to hear your take on what cards will be the finest in the format!

Well, heck with that. Instead, I wanna hear what you think is the finest Time Spiral card in multiplayer. And in order to hear your opinion, I’m willing to give cards for it, so I’m holding the first of what is sure to be many reader challenges for this column.

What is the Best Multiplayer Card in Time Spiral?

Here are the rules: 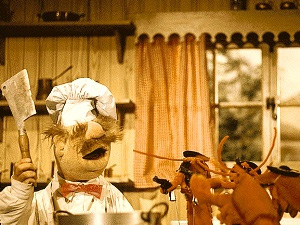 But wait – you want to know what my pick for the best card in multiplayer is? Well, I don’t know that it’s the best, but the most interesting multiplayer card that I saw was the Urborg Syphon-Mage – a card that’s just fun to say. I imagine the Swedish Chef swinging that card around his kitchen, sing-songing “Ur-borg-borg-borg!”

But I don’t play cards just because I think Muppets would enjoy them. No, I had a good reason for taking Urborg Syphon-Mage for a walk around the block; unlike many other cards in Time Spiral, the Mage scales. See, the best multiplayer cards tend to fall into four categories:

Thus, Urborg Syphon-Mage. It’s reusable, and each activation will get you more life with each opponent in the game. I had dreams of a ten-player game where I activated it and just kept going up eighteen points at the end of every turn….

So I built a deck to take it out for a spin. I could have recycled the Bayous and Pernicious Deeds I used in last week’s green/black deck – but this time, I tried to stick to newer cards to ensure that, well, y’all could afford them.

Here’s what I took for a spin in four casual chaos multiplayer games the other night:

3 Call to the Netherworld

If the deck looks erratic, well… It is. I didn’t have quite enough Time Spiral cards to play four-ofs, and I was experimenting to see whether I could combine the goodness of the Syphon-Mage with the black Madness mechanic that seems to be pushed in this set, so again – not so much with the tuned. But if it had worked, I would have seen that and refined the strategy.

As it was, it was a learning experience. And the most important thing that I learned from this deck is that “Urborg Syphon-Mage” might as well have the creature type “Flagbearer.”

Here is a list of things that people ignored in order to kill a single Urborg Syphon-Mage before it went active:

In one particularly amusing game, I cast Urborg Syphon-Mage seven times, recycling him endlessly with Call to the Netherworld and Regrowth, only to watch him get popped for the seventh time. That is when I began to call my Urborg Syphon-Mage “Kenny.”

It didn’t matter what else people had active; the moment a Mage hit, everyone decided it had to be dealt with. Remember how in my first article two weeks ago, I talked about the perceived danger of threats, and how opponents would go nuts in order to destroy a card that they thought was dangerous?

Well, Urborg Syphon-Mage is the icky spider on the wall. Maybe it won’t actually kill anyone, but people will drop everything to stomp it flat.

Now, there are things I could do here to improve the deck. My friend Vrax suggested adding Dense Foliage or Steely Resolve to help protect the fragile Spellshaper. (I still say it doesn’t help much against Pyroclasm.) I might go the route of turning this into a Reanimator deck with benefits, using the Syphon-Mage to drop guys into the yard to bring back on the cheap. I could probably also stand to drop a land or two, since I consistently got land-flooded.

It’s also possible that I’m in the wrong colors here. Perhaps I should go with blue instead of green to go the route of casting Circular Logic to protect my investments and using bounce to keep other guys off my back. (If you have any suggestions, feel free to lend a hand in the forums. I tried to go infinite, I really did…)

But in the end, the Syphon-Mage not only draws a lot of attention, but it’s not that powerful. It’s still going to take ten activations to kill everyone (assuming, foolishly, that there’s no life gain). It destroys possible alliances with weaker players, since you’ll accidentally be killing them in the process of trying to neuter the top dog. And worst of all, it gets less effective as the game boils down to the survivors; by the time it’s a one-on-one duel, you’re gaining a measly two life.

But you know what did work?

Oh my Lordy, Sudden Death put the fear of God into my table. 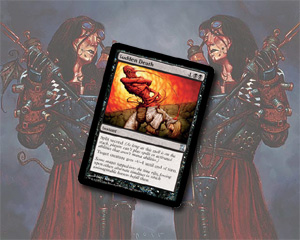 “Ferrett, I have a Morphling. I think I’ll attack… You.”

I glare at Dmitri with steely eyes. “Don’t do it.”

“Why not? I have a Morphling. I’ll just protect it.”

Dmitri, cowed by the crazed look of confidence burning across the back of my retinae, backs off. He doesn’t know what I have, but I have something, so Morphling goes skittering across the countertop to smash someone else in the air for five. Vrax, however, is not impressed.

“I’ll send with my Pristine Angel. Oh, and don’t forget that I have Whispers of the Muse with buyback, so it’s invulnerable.”

“Doesn’t matter,” I shrug. And I drop the bomb.

The split-second mechanic swatted Morphlings effortlessly from the sky, annihilated Wild Mongrels before they could drop Wonder to save themselves, and circumvented my little Blue-happy group’s Counterspells to destroy whatever I said I wanted destroyed, dang it. Suddenly, everything that everyone knew was totally wrong – creatures they thought were safe could be gnawed away in an instant!

They did not like this. But the idea that I might have a Sudden Death in my hand changed a lot. It didn’t protect me from everything, but when things were down to one or two creatures on the board, they had to deal with the fact that I might be able to destroy the unkillable creature, leaving them defenseless.

To steal a concept from Anthony Alongi, Sudden Death is one of the biggest rattlesnake cards around. “You come for me with anything having four toughness,” it says, “And it will be dead. Maybe you wanna take that creature somewhere else.” It’s not on the table, of course, making it less of a rattlesnaker than the happy Pernicious Deed, but the idea of it is intimidating enough to ward off casual attacks.

I only played two, because I only had two. But it’s gonna be a four-of in future decks, because man! It’s that good.

(We shall not talk about the game in which Vrax delivered a game-ending blow with two stolen Pristine Angels, an Eternal Dragon, a Dakkon Blackblade, and a Serra Angel, and suddenly had it turn into a rout when his flying army Sudden Spoiling that ran into a groundbound defensive army before he could do a darned thing about it. The reason we do not talk about that is that despite the pummeling, he still won that game.)

However – and this is important – there was also this conversation:

“In response to the first ping, I’ll cast Sudden Death, killing it before it can ping again.”

“Who said I gave up priority between the two pings?”

“So remove that little puppy from the game, would you? Along with your dignity?”

And that is an issue: Split-second is not quite a panacea. If a player has multiple effects he can cast back-to-back, once he’s started he can simply retain priority to cast a stream of those effects all at once, thus short-circuiting your Sudden Death.

See, Sudden Death is a great spell, but one of those piddly little timing issues that gives judges fits is that you can only cast a spell when you have a mysterious power called priority. Priority is part of why you can’t Shock a dude in response to someone sacrificing it; you don’t have priority during the sacrifice. (A better explanation can be found here.)

This means that there are rare, but very critical, moments when you cannot cast Sudden Death. 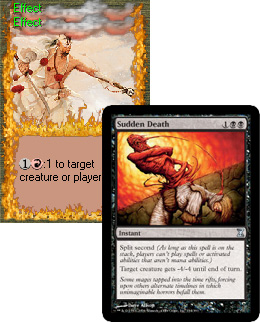 If your opponent hasn’t started, he’s helpless; if he has started and gives you priority at any point, he’s helpless. Which means that to avoid an untimely Death, your opponent has to put all of the effects on the stack at once – he can’t do two pings and wait to see if you Sudden Death before pinging for a third time. But by cleverly not giving up priority between Kumano activations, Vrax completely neutered what would have otherwise been a very clever Sudden Death.

Now. I have my own ideas as to what could be good in the casual scene. (In particular, I have a feeling that the Totems, which neatly help you out after a Wrath of God effect or an Armageddon effect, will become staple cards. And if your group’s been harried by an abundance of Pernicious Deeds, Krosan Grip should be winging its way to your decks like it was Superman to the rescue.) But I don’t want to taint your vision of what the real Coolest Card In All Of Time Spiral may be, so I’ll save those for another column.

In the meantime, best of luck! It’s a single card as a prize, I know… But think of the prestige! (And isn’t that what people always say when they’re being chintzy?)

* Note how cleverly I made it purposely vague what I was referring to here. This is what you can do when you mangle grammar for a living.