t's sitting on my kitchen table."

Sometimes you realize things when there's time to fix them. You lost track of a favorite shirt only to have it dawn on you right before doing laundry. You couldn't remember the name of that place where you ordered that thing that one time, until it all rushed back as you see it coming up ahead on the road. 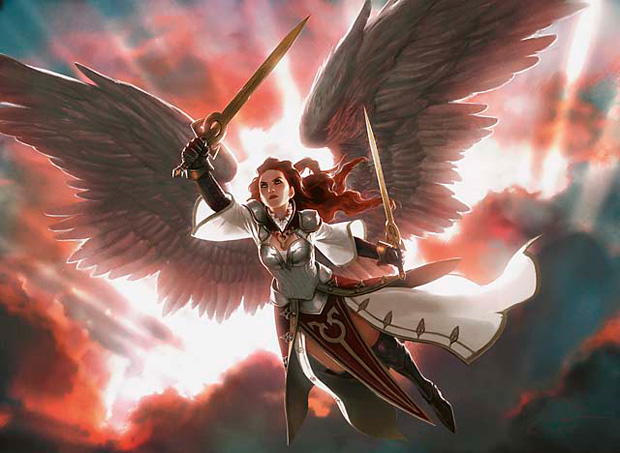 Other times it's halfway through a cross-country flight when it strikes you that a 200-count box labeled "Gisela" is still sitting on your desk.

That's the situation I found myself in two weeks ago when traveling to Grand Prix Anaheim. Despite my best intentions, and the boatload of awesome fun I still has beside it all, I failed to bring the one deck I assured everyone would be there. While setting up some Cube drafting was something everyone seemed to enjoy, testing out Gisela, Blade of Goldnight was something I had actually been looking forward to.

With a recent update here on DailyMTG.com, every decklist now has a handy download button to get the deck text in a format ready to be read by Magic Online. So when I post a vote-winning Commander deck...

Gisela to the Rescue


...you can hit the handy Magic Online logo to get a copy quickly. And that's exactly what I did last week after getting settled back into things at home.

But simply forgetting to bring the deck to Anaheim wasn't the only issue I ran into with it.

A Tale of Two Decks (in a Four-Player Game)

I played a few games using the deck because, as a righteous mathematician, I would never suggest that one game is a sufficient measure for performance. However, sharing just one game is more than sufficient for telling a story. 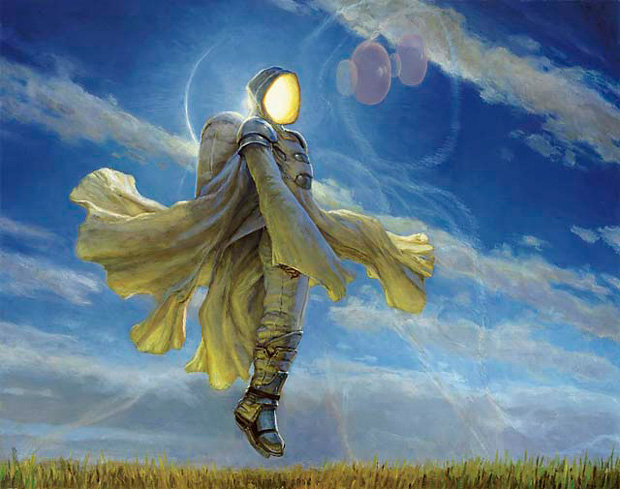 The game I chose is one that captured many different issues with the deck and how it interacts. While it's convenient for us, it also means I had to suffer through both the weaknesses of my deck and the overwhelming force of others it couldn't fight.

It was a confluence of conundrums, so to say.

I played with three others online: ChristChan, Gamepro_man2004, and Helldendragon. We'll call them C, G, and H going forward. The commanders looked like this:

Some games start slow but this one had an amazing dash to begin. Thanks to a turn-one Sol Ring, I had a turn-two Transcendent Master level up to a 6/6 with lifelink and attack C on turn three. I attacked C because of the Rhystic Study then in play, but a Venser, Shaper Savant reset my aggression on the following turn.

Both G and H were ramping up their mana sources, with H pulling the trigger first:

G didn't take this lightly and fired back with a Sun Titan, equipping Lightning Greaves. With the haymakers dropping I decided to play my own by adding Gisela, Blade of Goldnight to the mix. I was hoping for some multiplayer madness to happen, with damage to get thrown around elsewhere, but H cast Thraximundar to attack me, stealing Sword of Feast and Famine.

When C's turn rolled up, Illusions of Grandeur appeared before being passed to my control. At this point I had the least potential mana and fewest cards in hand. To say I was confused about getting kicked while I was down would be an understatement.

Instead of delaying the inevitable, I let Illusions drop me to 13 life and cast Sunblast Angel to take out Thraximundar, Thada, and Zedruu (which had attacked me for good measure too). H wasted no time with Bloodgift Demon followed by Plague Wind. The poor guy had barely made any new friends before they all left.

G's plan for the game was revealed when casting Recollect for Sun Titan, which brought back Eternal Witness, which brought back the Recollect, after all of which there was enough mana left over for Gideon Jura. Since H had to attack Gideon, C made a Luminarch Ascension. My turn let me load up with lands thanks to Tithe before replaying the Transcendent Master.

H replayed Thraximundar before trashing Gideon. When G attacked C with the Sun Titan, Eternal Witness came back, which returned Gideon to hand. H had a timely Dissipate to cut short that line of shenanigans. C merely mustered Zedruu the second time before passing the turn, where I made Razia, Boros Archangel to attack and keep Ascension off four counters.

But H made a much bigger play by casting Into the Core for C's Library of Leng (which had kept C's grip overflowing) and G's Lightning Greaves. This isn't interesting itself, but what it allowed was for H to follow through with a kicked Rite of Replication for the now vulnerable Sun Titan. An array of lands popped into play, and the game shifted...

...and was immediately reset by G casting Planar Cleansing. While Ascension and Study were finally gone, so were my Sol Ring and Boros Signet, which severely cramped my mana. The obvious follow-up sequence of Recollect for Sun Titan for Eternal Witness for Recollect occurred. C played Journey to Nowhere to exile the Sun Titan and I tried an Akroma, Angel of Fury face down.

But through H casting Cruel Ultimatum on G, the Recollect still remained, so the world was hit by Planar Cleansing again before G re-set the Sun Titan board. This time there was enough mana left over to Primal Command up Fierce Empath for a Terastodon. C made Zedruu again before I had nothing to do. H stole the Sun Titan with Volition Reins.

G still had more resets in hand, this time a Martial Coup for five and the ever-present Recollect for the Sun Titan still again. C valiantly played Zedruu once more before a Taurean Mauler was my only play. H kept applying pressure on G by making an Izzet Chronarch so Cruel Ultimatum could happen yet again. G was very unhappy about this, and the discussion became very heated. Iterative Ultimatums and board sweeping left everyone feeling upset, but there was little agreement on which iterative measures were worse, justified, or acceptable.

H had a suspended Aeon Chronicler for one before G's turn, which consisted of ripping Akroma's Memorial off the top of the deck, making Sigarda, Host of Herons, and attacking H. Despite seeing more than a dozen extra cards from Rhystic Study earlier in the game, C decided enough was enough. Casting Transcendence while at 23 life is usually a bad idea but it was a flashy way to concede.

Thanks to everyone else casting things, my Mauler was a healthy 8/8. This let me use Flowstone Slide to wipe out G's blockers and crack home with a 13/3, dropping G to 9. H didn't miss the opportunity, and when Chronicler came off suspend, Thraximundar reappeared and attacked for a tandem take-down.

The Chainer's Edict H had for my Mauler was unfortunate, but the real problem was mana. I didn't have enough to muster a defense, so despite pulling a Planar Cleansing of my own off the top I could only cast one creature. H's Thraximundar, cast one last time, was enough to finish me off.

Thanks again for the game, everyone!

Better Than Bad, It's Good!

So what happened? Based on the other games I played, and some helpful deck dueling to confirm how several different hands would play out, both my deck and the players I ran into created some bad mojo: 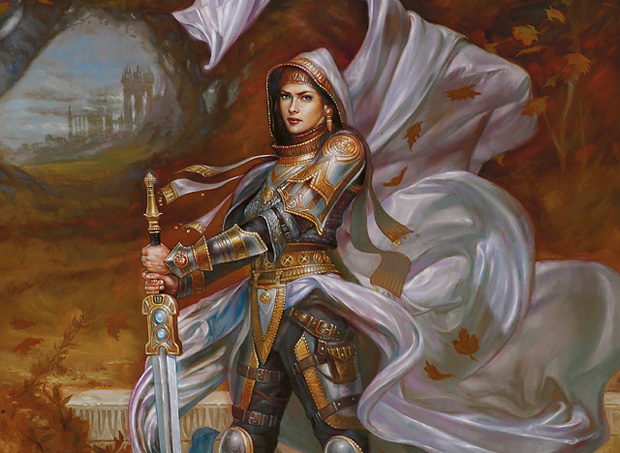 The first two points can be adjusted easily.

Streamlining the mana and adding some ways to break into opponents' actions will give Gisela a little more battle prowess at tables similar to what I saw online. The main thrust is unerringly true: go big and make Angels. After seeing so many situations where your deck's power is pulled apart makes the temptation to completely upend everything in order to fight future opponents is strong. But holding firm to how you want to enjoy your deck keeps things much more fun.

I know I've never found joy in feeling forced to do something simply because someone else insists on it. The line between cool and cruel can be very blurry depending upon how you look at Magic. I try to stay firmly on the cool side for everyone.

Which leads me to the final trick: giving Gisela another try. This time I'll take her to my local game store. I'll suit her up with some Planechase. I'll find some familiar faces who will have decks similarly situated. Gisela will fly again.

She still might not win, but playing with friends will certainly help gloss over any loss.

I really do wish I had the chance to tap some Plains and Mountains while I was in Anaheim. I did unsuccessfully tap some Swamps and Mountains in an Avacyn Restored draft, but that's neither here nor there.

What I left us with last week was a two-part poll:

Whether you've tried before, plan to someday, or are avoiding the whole thing, it's only at events like a Grand Prix you'll find some of the most interesting things in Magic. Anaheim was host to some very special things:

It isn't that everything at a Grand Prix is for everyone, but that there's something for everyone at a Grand Prix. You can be sure the next time I'm trotting off to one that you'll know, and that I hope to meet a few more of you there too.

This week I have another easy question:

Join us next week when we start getting lucky. See you then!