here's an adage of encouragement that goes something like this: "Whatever doesn't kill you makes you stronger." Ostensibly, this reflects the knowledge and personal development achieved through facing down challenges. As you conquer adversity, your capability should grow.

Realistically, incremental doses of something (like, say, poison) will kill you. Dead. Passed on. No More. Ceased to be.

But the land of tropes is plentiful and rich. Last week's vision of shared hope in the face of certain doom was a positive spin in Dark Ascension. Rally. Battle. The faithful will prevail. There's an opposing trope that, literally, eats that stuff up. The more you throw at it, the stronger it becomes. Conventional weapons are useless. Those who move to waylay the onslaught fall prey to it senselessly. Self-sacrifice, while noble, is ultimately fruitless.

It's a monster of unbelievable power and usually one that hunts without intelligence: When you devour everything you come across, "hunting" is more akin to casual buffet grazing. As such monsters might be wont to say, "Humans (and everything else) are quite delicious."

Here's something only a doctor (assuredly mad) could love: 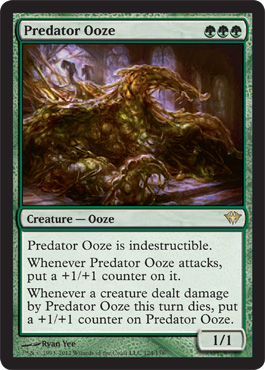 This is a vile bile you really can't touch!

And it's actually a clever little bugger. Let's look at its first ability.

You can't kill it, at least normally. Even jumping is useless. (I guess flying would help a little.) While Innistrad packs a few ways to stop the predation—through Fiend Hunter, Claustrophobia, and other friends—the vacuum of Magic is far wider. Venerable mainstays like Doom Blade and Day of Judgment just tickle our gelatinous gorger. The wider you go, the odds of indestructible becoming more terrifying get way better.

The biggest backstops can only buy time. Normal combat damage won't strike it down, but when the Ooze slinks over it picks up girth along the way. Every time it slides along, it absorbs from the surroundings. Thanks to being indestructible, you can count on it making those attacks at every opportunity.

Tokens, small fries, and those weak of toughness should avoid all contact with Predator Ooze. While the ability seems to align with a combat-based approach, it's worded in a way that makes our Ooze a little more insidious: regardless of how you got nicked, your untimely death only makes it stronger.

The first way to play with our eager Ooze is a very traditional approach.


Yep. It's attacking. Since our Ooze loves to trigger its way into combat, I paired it with a few fellows who roll the same way:

The last group in particular is a troublesome set for opponents to contain if it's given a chance to attack multiple times in the same turn. So the selection of spells that net us an extra attack step do just that. Going (almost) all-in on creatures helps tie together everything into an aggressive little package, particularly the suite of mana-ramping helpers: when you're casting Dragons and Comet Storm, some extra mana goes a long way.

But we can be a little more clever than that.

1 Overrun 1 Howl of the Night Pack

Green and mean have never looked so ugly.

I Will Never Die

Predator Ooze does all sorts of nasty damage and combat-related things. It's great for being on the hunt. But when I read cards like Predator Ooze, my thoughts are sometimes more eccentric than I'd prefer to share.

Predator Ooze glided down the street. Its bulbous, amorphous head was cast downward, leaving the distinct impression of sorrow.

Opposite, heading down the street towards the Ooze was Novablast Wurm. It, too, looked sullen, gloomy, and completely ignorant of its direction. 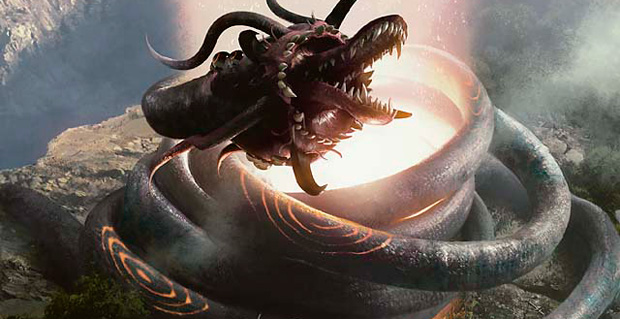 In a matter of moments, the two bumped directly into each other in a head-on collision.

"Ow! Watch where you're going!" the Ooze snapped in a warbled drip.

"You watch where you're going!" the Wurm roared.

The Ooze shimmered right into the eyes of the Wurm. "Hey. Back off, Bub. You don't want to mess with this."

Coolly, the Wurm responded. "Oh yeah? You don't know what you're messing with. It would blow you away."

Undaunted, the Ooze continued. "I've eaten Dragons for breakfast. What have you got?"

Fueled with rage, the Wurm's retort faded as the magical illumination grew. "Your total destruction..."

The flash of light burst across the street, filling the entire area in an unnatural glow. Death was all that awaited those whose day was brightened. And, just as fast as it started, it was over. Wisps of smoke from the vaporized remains of everything around the Wurm created a thick haze.

When a gentle breeze picked up, the haze parted, and the Wurm was shocked. "You... you're alive?"

"Of course I'm alive," the Ooze returned, "Why would you think I would be dead?"

"When I move around or get angry, everything always dies. It's miserable. I sidle up to some good-looking Wurm and the next thing I know—Poof!—everybody's gone."

"I hear you. When I hang around people I can try to be nice and friendly. But a few quick touches later and, well, instead of them growing on me I've grown through them."

"Well I'm Novablast Wurm, and I think we started off on the wrong foot."

This story is preposterous. The realist in me balks at two forces of nature interacting like two random Joes in a city. (And, for some reason, I wanted to shove a "bro" into the dialogue.) But it's through silliness like this that my ideas grow into something more concrete.


Scorched Earth is not a particularly diplomatic policy to strive for. Of all the choices available at any given time, "destroy everything" usually ranks fairly low on the list. However, there are times when it's entirely appropriate to kill a fly with a sledgehammer. Welcome to the world of wiping the battlefield. 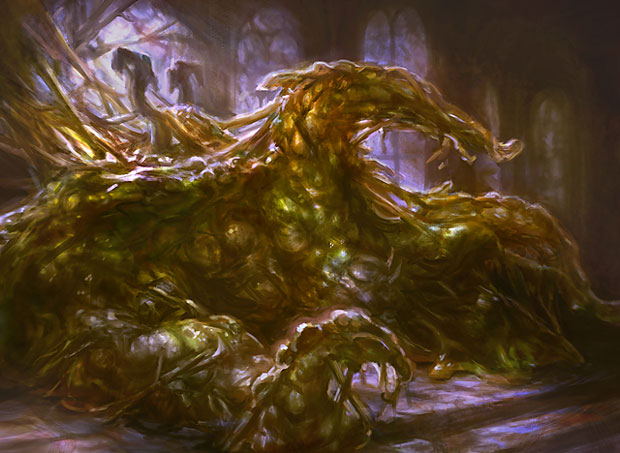 There's definitely room to switch up a few things. For example, there isn't equipment to help Darksteel Myr be anything other than a small blocker for you. The idea, however, has merit. When you have an unkillable monster, it's only natural to pair it with a friend that absolutely kills everything.

While some of you had more unique ideas about making it on Innistrad, including a few suggestions of submitting to the influence of Demons, everyone had a plan in mind for the story they wanted to tell. My story would be one of becoming a Werewolf. While I normally work to keep my rage in check, I'm also the kind of person to willingly rage when there's a purpose at hand.

The silver-and-blessed confinement of the collar of Avacyn, when imposed by others forcefully, is something I could see resisting. Adding fearsome power and paws seems like the kind of bonus that would work in my favor.

This week's poll, however, is grounded firmly in reality:

You know my answer, but it's you who I hope to see tearing into packs and happily devouring the turn of darkness! Join us next week when we stack things up 99 cards high!