gotta be honest with you: I played today's preview card in my usual Tuesday multiplayer mayhem, and it destroyed my friends. They never had a chance. Completely wiped ‘em out.

But that's mostly because they didn't sign the NDA.

“NDA,” for those of you not in the know, stands for “Non-Disclosure Agreement,” which is Wizards' nice way of saying, “If we show you this card in advance, you promise not to tell anyone else about it.” And if you don't sign the agreement, Wizards does not show you the card.

And neither do I.

“But what does that card do, Ferrett?” they asked plaintively, looking at the card I kept covered up underneath a pure white sheet. “Can you at least give us a hint?”

“I can't tell you,” I replied. “But trust me. It's totally kicking your ass.” And so I continued to play my game from behind a thick curtain, all so I wouldn't disrupt the integrity of Wizards' phenomenal preview system. And as long as they had no idea what I was playing, I remained undefeated.

It was like my whole deck was morph. If you can ever play with cards you can't reveal, I highly recommend it. They have to believe you.

But you? Well, it's time. I can share with you the total awesomeness of Wizards' latest preview card.

But . It's totally kicking your ass.

Now. This may not look like much. And yet it's one of those cards that grows so well in multiplayer.

Before I go any further, I should note that my special preview card came with a little friendly Post-It note attached to it: “Note for the casual crowd: This works with Phage!” So obviously, the delightful folks at Wizards want you to know that one of the most auto-win cards in Magic, if you can play it – Phage the Untouchable, which flat-out kills any player it does combat damage to – combines well with Body Double.

And why is that? Because you'll be playing Body Double from your hand. Why wouldn't you? Body Double is two mana cheaper (and, more importantly, an astounding three colored mana cheaper) than Phage! So when you cast it and make a copy of her from the graveyard, you've technically satisfied the whole “Must play from hand” condition that otherwise makes Phage so awfully deadly in most copy effects.

So Body Double is a cheaper Phage. That's cool. How could we abuse that? Perhaps with a little discard and, you know, haste. Just to keep people off-guard.

Hmm. That's three colors, and one of ‘em requires a Mountain to be in play… So we're just gonna forget about casting Phage entirely, and figure on copying her with the amazing hastiness of the deck. For that, we'll need a Phage, so we can dump her into the graveyard and then excavate her with the Body Double… And as long as we're concerned with getting cards into the graveyard, why not get Anger in there as well, which gives all of your creatures haste as long as you control a Mountain?

After all, if they see Phage coming they're gonna gear up for her. She needs a surprise value.

But what happens if you get your hand choked with a Phage you can't cast? That would be awful! Thus, we provide a couple of discard outlets: Careful Study and Compulsive Research are cheap ways to draw cards and get the all-important Phage/Anger combo out of your hand and into the graveyard.

But then we're facing the problem that is the bane of all semi-combo decks, like this one, which relies on a single three-card combo to work: lack of defense. If we're spending all of our time drawing cards and setting up, other people will smash our face. Hence, we put in Drift of Phantasms, which is not only an annoyingly tough wall to break through, but in a pinch it can tutor for a Compulsive Research. And we also put in Aquamoeba, which not only has a nice fat butt but can discard a Phage or an Anger upon command.

And since we're discarding cards, why not play with madness and bring in Aquamoeba's old buddy from the old days – Circular Logic? It's not a hard counter by any means, but after you've dumped enough cards into the ol' graveyard, who cares? If you want unqualified counterspells, you can put ‘em in yourself. (Besides, I like a counterspell that I can tutor for with Drift.)

But that's a little narrow for me. I mean, Body Double is nice, but we've barely touched upon its greatest quality – it scales. The wonderful thing about Body Double is that it doesn't have to copy just Phage (and what a lonely, lonely existence that would be): It can copy anything that's dead.

Let me repeat that in larger letters:

IT CAN COPY ANYTHING THAT'S DEAD.

In multiplayer, that's known as “scalability.” Because let us discuss, for a moment, The Ferrett's Rule of Multiplayer Devastation:

The more players at the table, the greater chance you will see a Wrath of God in any given turn.

It may not be a Wrath of God exactly – it might be the spanking-fresh, newly-printed Damnation (and isn't that neat, folks?), or a Plague Wind, or an Inferno activation from Jaya Ballard, or any number of other board-clearers.

But with every player who joins up, at least one of them is likely not to like the current state of the union and will move to eliminate the competition. In eight-man games, that means you're gonna be lucky if your critter lasts two turns.

But their loss is your gain! Because once that Akroma, Angel of Wrath or Pristine Angel or other annoyingly-hard-to-kill creature hits the bin, she's fair game for your Body Double! 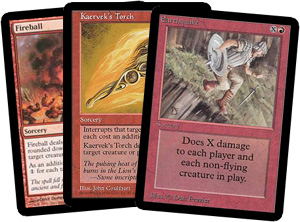 Others worked hard to kill that danged creature. And now it's back, working for you. Isn't that nice?

So with this deck, we need a little bit of kill – and since we're already packing red, we should use some red spells to clear the way for our Phage and to pick up potentially good targets for our Body Double. (If we had actual black as opposed to simply a black card, we could use Terminate, but that's not an option here.) So we put in four Seal of Fires and a pair of the X-damage-dealing red spell of your choice – I like the old-school touch of Kaervek's Torch, but you can use Fireball or Blaze or Earthquake or Ghitu Fire or Starstorm or even Rolling Thunder (but not Demonfire or Disintegrate, which could remove the creature from the game, far beyond the reach of Body Double). You might even try Invoke the Firemind, but the mana cost on that frightens me a little in a deck like this (especially when you want an X spell to deal with the creature you can't handle).

Kill something big one turn. Take it the next. That's not a bad deal. In fact, if you wanted to, you could go all-out for the big kill with a U/B deck designed to destroy everything and then take the best of it back with the Double in a Standard-legal deck of doom:

…but you know, that's a deck for another day. We're talking about a bit of hasty pseudo-combo – the kind of deck you can only play once before your friends gang up on you again!

Okay, so the deck we have above (the Body Double/Phage deck) has some issues. It's got haste, but no evasion – which means that Phage might wind up chumped by some creature for a turn, giving your opponent time to draw an effect that could kill or bounce it. Sadly, there's no room left in the deck to squeeze in an effect that grants the poor Body Double evasion!

But if this concerns you, you might try removing the conditional counterspell capacity of Circular Logic and try putting in a Wonder for a flying Phage, baby! Or perhaps you might even want to toy with the ever-popular Peel From Reality to bounce your opponent's blocker and return some other Body Double to your hand to reset it (even as this deck's a little creature-light for me to feel good about using it consistently). Failing that, there's always the popular Aether Burst – another Odyssey Block golden hit that works well in multiples.

There are a lot of creative ways to abuse Body Double. She looks like your worst nightmare a turn ago, and now it's time to bring the pain to someone else.

“If you kill it, Body Double will come.”
—Kevin Costner, in the little-known film Field of Dead Bodies