he finish line for the Gatecrash preview season is in sight, and the hits keep coming. While the list of cards I "need" grows daily, that's a tale for another time. This is the time for our own preview, right?

Previews are an interesting experience from the other side of your screen. While I get this piece of awesome to share with the world, I don't get to see the forest where the tree lives. It's like trying to understand what a beach is like but only having a handful of sand.

So we work out solutions. Two weeks ago, we experienced an encounter with the leader of the Dimir, complete with missing information and tricky misdirection that took a technical turn for the too literal (despite the awesome flavor of the Dimir successfully stopping us from learning the truth). Last week's peek at a greedy, powerful Dragon led to either conflicting or cooperative ways to win with other players in the mix.

Not all previews are so deceptive in their depth.

I enjoy multiplayer games, particularly Commander. A common sight in these games is returning something from the graveyard to the battlefield—i.e., recursion. The premise is simple: The more you can recycle the best resources available, the easier it is to fight a war on multiple fronts. When you have two or more faces looking at your side of the battlefield, getting more out of less is the delight of any strategist.

And when you get back the "most awesome thing ever" it's, well, awesome.

If you're using Swamps, two cards that can do that are Geth, Lord of the Vault and Ashen Powder. While Phyrexian Delver and Zombify do the job from our graveyard, I like to shop around for goodies in other players' bins. It makes the aftermath of a late-game Supreme Verdict the same as having a birthday party: Everyone else brought presents for you to choose from.

What does this have to do with previews? It's exactly what our mouthful of a Gatecrash card is today: Sepulchral Primordial. 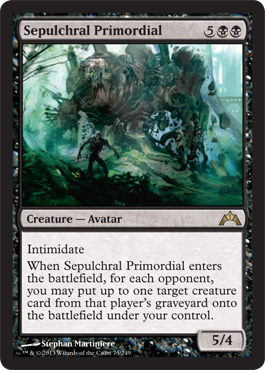 It's time to open all the gifts at once.

We'll look at more of the card later, but I won't beat around the bush, because there's only one reason we'll be playing it:

Thanks to the awesome work by members of Magic R&D, I can continue to borrow my favorite Kelly Digges quote: "That, ladies and gents, is a hell of a trigger." It seems pretty familiar too.

That's a previously previewed card that comes with a potent trigger, and it even costs the same amount of mana. While each works in a different way, I will make a bold statement: Sepulchral Primordial is better because you get the goods right now. Enchantments like Grave Betrayal can do work if they're left alone long enough, but sharp players will avoid giving up too much to it—or just kill it outright on sight.

Sepulchral Primordial doesn't delay the action. It's a one-time deal, but with three other players odds are good that's good enough, particularly when you work to set it up that way.

If you're into milling—putting cards from a library into the graveyard—the Dimir can help you out.

Consuming Aberration and Whispering Madness are also in Gatecrash, but there are plenty of other options nearby. All of these cards cut down libraries in ways Grave Betrayal doesn't care about. But the same things that work with Grave Betrayal work for Sepulchral Primordial as well.

If it kills, it thrills. While Damnation, Supreme Verdict, and every flavor of Day of Judgment exemplify a blunt-force-trauma approach to having choices, I like these choosier ways. Graveyards stay stacked longer when opponents aren't immediately terrified of what you might be up to. If you share the burden of choosing what goes to the graveyard, Sepulchral Primordial can stay a surprising secret.

If you do a search on Gatherer you'll find plenty of cards that return things from your graveyard to your hand or the battlefield, but only a narrow handful that will do it from an opponent's. While Mimic Vat and Deadeye Navigator are well-established multiplayer powerhouses, the havoc they can wreak goes off the charts if something like Sepulchral Primordial is in the mix.

I'm already planning to slam it into my current Grixis battle mix.

While I'm waiting with the rest of you to see Gatecrash in all its glory, the aforementioned trio of Whispering Madness, Consuming Aberration, and Sepulchral Primordial are excellent additions to my arsenal of milling and recursion. In fact, I cut Grave Betrayal to make room. Funny, that.

While I'm partial to Garza Zol and her combination of haste and card drawing, Sepulchral Primordial reaches across to many other commanders in the world.

If you play Thraximundar or Nefarox, Overlord of Grixis, the creatures you make opponents sacrifice will become your own.

If you play Vish Kal, Blood Arbiter or Ghave, Guru of Spores, Sepulchral Primordial provides a flurry of food for your leader.

If you play The Mimeoplasm or Teneb, the Harvester, the bounty of cards that put creatures into opponents' graveyards is a feast for even more.

If you play Karador, Ghost Chieftain or Glissa, the Traitor, your opponents will be keeping a careful eye on your graveyard, even as you create supermarkets in theirs.

If you play Myojin of Night's Reach or Anowon, the Ruin Sage, opponents' graveyards will end up filled with targets for you. Throw in Persecute for full effect. (Do so at your own risk.)

And that's all I have to say about Sepulchral Primordial in Commander. Let's move on to the rest of the card.

I've lavished praise and potential on the triggered ability for entering the battlefield, but what about afterwards?

The first two points are mundane. Once you've resolved its unique ability you're left with an evasive fatty. I'm sure you can imagine setting up some twisted combat thanks to Alchemist's Refuge or Leyline of Anticipation. There are lots of creatures that lend themselves to this.

The fact it costs seven mana isn't an accident, however. While I can only speculate about the potential of this costing six or five mana, it's a blessing in disguise we can't cast it too early. Seven mana means we need to be doing other things until we get there, like casting our own spells and creatures to kill those of our opponents. If we look at Sepulchral Primordial as the top of what we'd want to do we can see it forces us to work with it.

This is a crude and straightforward deck, but it demonstrates what Sepulchral Primordial asks for:

It's easy to get wrapped up on just the trigger you'll get when Sepulchral Primordial comes into play, but the logistics behind getting to that point shouldn't be ignored. There are many fatties in black—bigger and cheaper—so casting this as "just" a 5/4 would be sad. There are many creatures in Magic—more powerful and interesting—so not finding a way to put some into graveyards first is shortsighted.

And that's what made this preview tough for me: Once I made it past swooning over the trigger I found the rest of Sepulchral Primordial to be ordinary, or even unexciting. That letdown between what it can do upon getting into play, and what it does after it's there, led me to see importance in the price.

At seven mana, we only have ourselves to blame if Sepulchral Primordial doesn't make the entire table of players stop and look at what's happening. 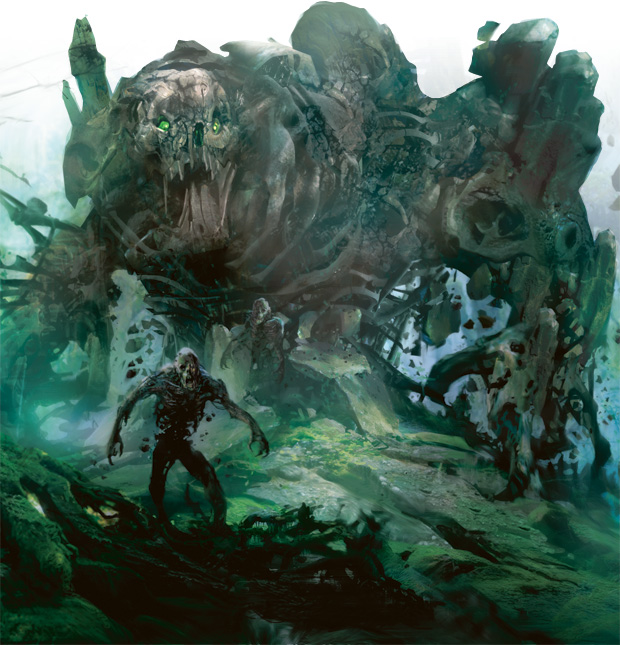 Returning to the Source

I'll be checking in for the latest previews all this week as the rest of Gatecrash is revealed. Of course, the Prerelease is just the weekend thereafter so I doubt I'll be alone. But what does that mean for us?

As I shared over the holiday break, The Compendium of Casual Magic is my project to pull together every way to play shared through Serious Fun. There's one format I encountered that I wanted to refresh in a new way, and Gatecrash is just the way to do it.

While I don't have anything more than brownie points, I'll tell you if your guess is correct if you mention me on Twitter. Until then, enjoy the final previews!