This preview card is perhaps the most awesome—

... No, no, that won't do. There's some threshold of awesomeness beyond which "the most awesome" isn't remotely a sensible thing to say. Here, try this quiz: 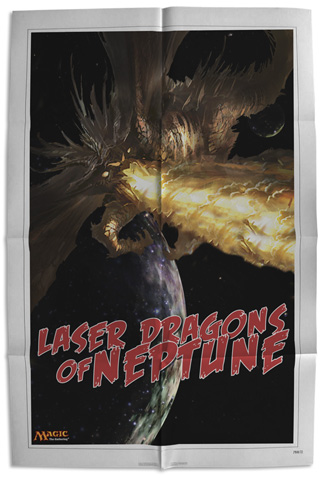 Q: Which is more awesome, dragons or space battles?

A: WHO CARES?! Nobody, that's who.* The point is, they're both awesome, and you probably don't get to have both (since I'm still waiting for the green light on the script for my big summer blockbuster, Laser Dragons of Neptune). Sometimes you'll have one, and sometimes you'll have the other, and all of those times will be awesome. Other times you will have neither, and those times are not at all guaranteed to be awesome.

*Disclaimer: In fact, I guarantee that at least two people care, and that they've argued about it on the Internet, and that at least one of them will read this and post about it in the forums.

The upshot of all this is that saying any card is "the most awesome" anything is like saying that the sun is "the most hot." It may or may not be true, but in practical terms it really doesn't matter. There's lots of room at the top.

Have you ever wished you could attack during your opponent's turn? Today's preview card doesn't let you do that—I asked Rules Manager Mark Gottlieb about it, and he hasn't spoken to me since—but it comes awfully close ....

... No, that doesn't seem right either. Why talk about what the card doesn't do? Especially when what it doesn't do is something like I just made up? That's like trying to sell a car by admitting that it can't actually fly—it just feels like it.

Actually, I'm sure some car company has run that exact ad campaign. 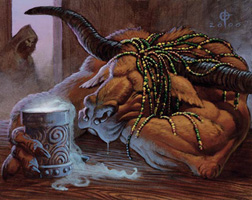 In historical terms, today's preview card is well above the curve. I'd argue that it sets a new standard for damage output among cards of its converted mana cost, as you can see on this chart I've prepared—

Today's preview card speaks for itself, so ... 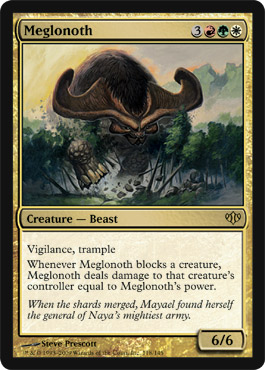 Some time ago, I overheard Magic developer Erik Lauer talking about a hypothetical ability he called "blample" (not to be confused with "flample," which is just flying + trample). Blample is exactly like trample, but it works when the creature blocks instead of when it attacks. So if you attack with a 4/4 and I block with a 6/6 with blample, you take 2.

I don't know whether blample directly inspired Meglonoth. I do know that getting anything that's not trample to act like trample is extremely difficult. Meglonoth avoids that difficulty by the simple expedient of dealing its entire power to the attacker's controller—a very green solution, if you ask me.

As usual, I've spent a lot of time thinking about how to maximize today's preview card. After carefully reading Meglonoth, scanning Gatherer, and looking deep within myself, here's the plan I've come up with:

No, really! Meglonoth is—how do I put this?—insane. It's a 6/6 trampler on offense that can still sit back on defense holding an enormous stop sign. That's it—no Johnny tricks, no assembly required. Plug and play.

... But, be that as it may, let's say you're not happy with your 6/6 with vigilance and trample that domes your opponent for daring to attack you. Let's say you want to get crazy. We can accommodate.

The first three things that jump to my mind when we're talking about ways to make Meglonoth (even) better are the three matching "God Auras" from Shadowmoor block: Runes of the Deus, Shield of the Oversoul, and Scourge of the Nobilis.

Of these three, Runes of the Deus—of which I'm generally a big fan—seems the least exciting here. Meglonoth already has trample, and double strike doesn't help it hit your opponent harder when blocking. Scourge of the Nobilis, though .... Now we're talking. Lifelink lets you gain life when Meglonoth attacks, when it blocks, and when it actually deals damage to the creature it's blocking, and the "Firebreathing" lets you pump up the damage (and the life gain) to absurd levels.

But the best of all, to my mind, is Shield of the Oversoul. Now you've got an indestructible 8/8 creature with vigilance, trample, and flying. It's less likely to be blocked, and more likely to be able to block, and very, very unlikely to die in combat.

By ranking them, I certainly don't mean to imply that you have to choose between the God Auras. As an old boss of mine used to say, "Why not both?"—or, in this case, all three? There is nothing at all wrong with an indestructible 12/12 with flying, trample, double strike, vigilance, lifelink, and Firebreathing—provided that you control it, that is. 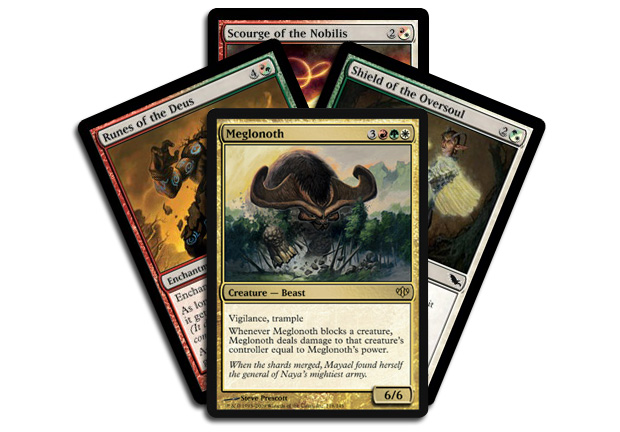 And as long as we're on the subject of "things that are obviously awesome with Meglonoth," I might as well bring up Loxodon Warhammer and Umezawa's Jitte (which also come up when you search for "things that are obviously awesome with creatures"). Loxodon Warhammer, like Scourge of the Nobilis, gives Meglonoth lifelink and a power boost. Umezawa's Jitte, of course, is just silly generally, and doubly so on a creature with vigilance that cares about power boosts. Careful, though—the damage Meglonoth deals to opponents as a result of blocking is not combat damage, and won't put counters on the Umezawa's Jitte.

There are other effects, however, that don't care whether damage is dealt in combat or not. Curiosity—and its descendants Ophidian Eye and Keen Sense, the latter of which is conveniently green—turn Meglonoth into a card-drawing machine. Sigil of Sleep lets you bounce a permanent whenever Meglonoth blocks, and usually when it attacks as well.

This is all well and good, and some of it's really quite exciting. But I think we can do better. (This is not to say, however, that I will not be enchanting Meglonoth with Shield of the Oversoul!)

Take a look at this little gem from the Conflux FAQ:

If Meglonoth somehow blocks more than one creature, its ability will trigger once for each creature it blocks.

They gave us the opening; all we have to do is figure out that "somehow." Fortunately, there are plenty of options. High Ground lets each of your creatures block one extra attacker, which isn't a bad trick anyway. Valor Made Real can come out of nowhere to let your Meglonoth block a whole attacking force—a nasty surprise—while Entangler puts Meglonoth on guard duty permanently. Mirage nonclassic Yare is hilariously well suited for Meglonoth, setting up two extra blocks and a power boost as well. Three blocks times 9 power is 27 damage, which is, according to my calculations, more than 20.

As an alternate route to multiple blocks, there's always Balduvian Warlord. The Coldsnap uncommon lets a creature block and then re-block, causing Meglonoth to trigger twice. (This will also cause opponents to lapse into comas as they attempt to read it, making it sort of like a cross between General Jarkeld and Stone-Cold Basilisk, or between False Orders and cranial trauma.)

The examples above all assume, perhaps naively, that your opponents are going to blithely attack you with creatures Meglonoth can block. Let's examine that assumption from two angles.

More often than you actually trigger Meglonoth, you're going to find that people won't attack you—can't attack you, if they're low on life—with creatures that are in danger of being blocked by Meglonoth. Sometimes, naturally, this will cause them to kill Meglonoth; these things happen, and there's nothing wrong with playing a must-answer creature. Other times, you'll find players attacking anyone but you, or leaving their ground-pounders at home, at the threat of 6 (or more!) to the dome.

One can certainly make the argument that that's not a bad thing. Meglonoth can serve as what Anthony Alongi used to call a "rattlesnake" card—something that sits there looking menacing to convince opponents to look for easier prey. That's an important job. And since it has vigilance, it can still do this while attacking for 6. Not bad, not bad.

Personally, though, I'm a fan less of deterrence and more of smashing. Let's say I'm trying to make sure that Meglonoth does trigger. Beyond the above shenanigans with multiple blocks, what can I do?

Let's start with a card that I fall more in love with literally every time a green creature is printed: Dramatic Entrance. Your opponent surveys the battlefield—coast is clear. Some mana untapped, but there's nothing she can do about that. She gives the word, and her minions surge forward, their jaws/swords/other pointy bits nearly within striking distance of you—

—when you drop a Meglonoth on them out of nowhere to stomp one of them flat and "trample" on over to gore your opponent. Dramatic! Elvish Piper and Quicksilver Amulet can do the same thing, albeit with a little less surprise factor.

That only works once, though. What about subsequent turns?

Easy! Just force your opponents' creatures to attack. You can do this piecemeal with cards like Boiling Blood or Bullwhip, or you can go all-out with cards like Grand Melee and Fumiko the Lowblood. Grand Melee goes well with Meglonoth's vigilance (and you could stuff your deck with other vigilance creatures too). And in a multiplayer game, any of these combine wonderfully with Meglonoth; either your opponents are attacking you and getting trounced by Meglonoth, or they're attacking other people and ... not attacking you. It's win/win! Except for the people getting attacked or trounced by Meglonoth. They might lose.

Oh, and one more thing to note: Meglonoth's triggered ability deals noncombat damage to an opponent, and that means you can choose to redirect it to a planeswalker that player controls.

I'm pretty excited about the card, so I took all these ideas for making Meglonoth hum and crammed them into a deck. Let me stress that I haven't tested this deck, or even built it with actual cards; it's purely a conceptual exercise. It doesn't have enough creatures, it has too many cards that need me to have a creature, and I'm not convinced the mana base makes any sense at all. But hey, it's a start! Once I get it built, I'll play it to figure out what works and what doesn't, and go from there.

That's it for this week, folks. Join me next week for another Conflux preview featuring one of my favorite new Magic phrases ever. Until then, keep stomping!