t's Multikicker Week this week, which means there will be multiple kicker discussions. And before I continue to punt my puns, I'll let you in on something not-so-secret: kicker is better than you think.

No, better than that.

Yeah, like that. Perhaps. I actually have no idea what you're thinking about. But I've made my point abundantly clear: Kicker is phenomenal.

I'm not going to pretend to be the ultimate expert on kicker and its various interactions with evaluation and efficiency. In fact, kicker is sort of scary to try to value and figure out "how good" it is on a given card. But what I do know is that kicker is not only a blast to play with, but comes in a flavor for every player.

Having lots of kicker cards is like going over to a friend's house. You can try something in a small dose but, if you decide you wanted more, you can get a fuller portion. Worldwake brought us multikicker, which is, essentially, an all-you-can-pay-for buffet of whatever your hungry heart desires.

So permit me, if you will, to become your personal sommelier of kicker. I've got great recommendations to pair with any taste and, perhaps, a few vintage choices you'll want to procure for yourself. 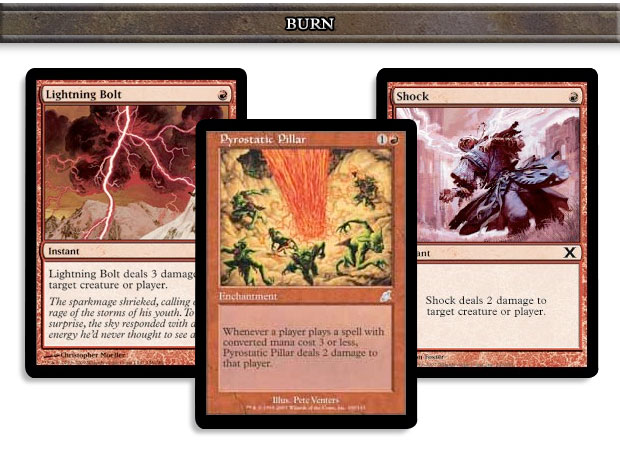 Burn is both a classic staple, as seen in the recently returned Lightning Bolt, and a multiplayer attention grabber, as in the equally classic Earthquake. Burn with kicker, like Burst Lightning, gives it a little boost right where it needs it: size. While I love a Shock that can scale up, it's the older stuff that appeals to my senses. Breath of Darigaaz, the Igniter and Canopy Surge serve as miniature versions of Earthquake and Hurricane, which is handy when you need some variety. 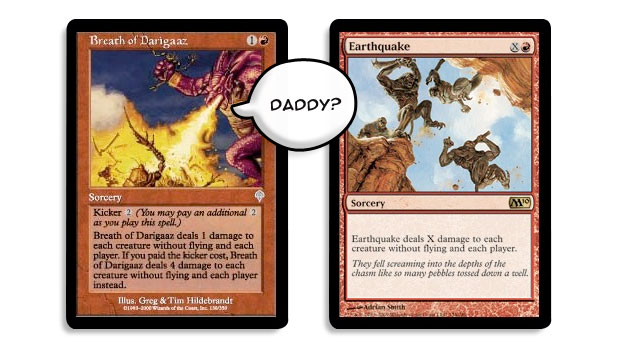 Of course there's no subtlety to blasting everything—as any red mage can attest, sometimes you end up taking your face for the ride. However, Worldwake brought us a refined version of a brutish red mage's blast: Comet Storm. With just a touch of extra mana you fortuitously curl around nuking your own creatures (and face), bringing space rocks of doom exactly where you need them most.

Ultimately kicker always gives you more of what you want, and if it's burn that makes you happy, the ultimate burn spell has to be Urza's Rage: blue mages can't take care of it through normal means (like Counterspell), and once you kick it to full power it becomes a half-your-starting-life slam to your opposing planeswalker (or creature if you prefer) that can't be prevented. Ouch.

While burning everything down is the obvious game plan, kicker gives you many more options than may be apparent at first glance. Molten Disaster and Urza's Rage both overpower anti-spell resistance overtop of the bevy of scaling burn. The real "tech" here is some life gain to counteract the dangerous aspect of burning yourself—Kor Firewalker and Dragon's Claw both trigger off your own splashy burn, while Auriok Champion gives you the bump when a creature drops in—and none of them being hurt by your splashy onslaught. And, of course, Keeper of Kookus is one of the few Goblins that can really play with fire, like they so love to do. 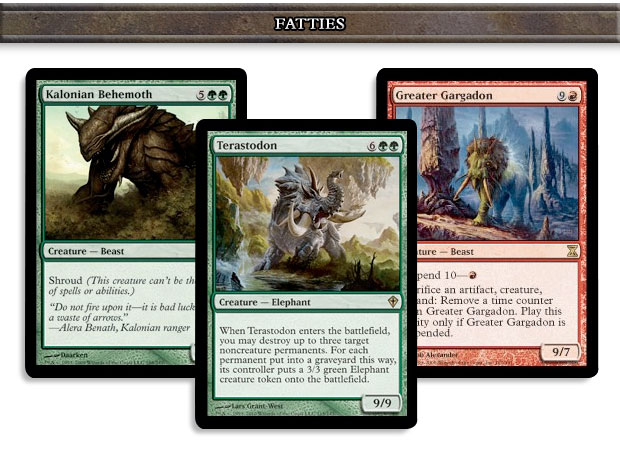 Big creatures make the game go 'round, or at least they do for me, and for a bunch of you out there. If the heavy-hitting nature of a Frankenstein's monster of mana floats your boat, the 'Volver cycle from Apocalypse is where to start: Anavolver, Cetavolver, Degavolver, Necravolver, and Rakavolver are what Mark Rosewater has called "Lego creatures" in that you could spend "all the mana you could [to] create a monstrosity." For a comparison, consider the Invasion and Planar Chaos legendary Dragons: six mana for a 6/6 flying dragon with a conditional triggered ability. Anavolver, played out fully kicked, is a 6/6 flying with no mana cost regeneration. Building a creature was never so much fun since with just a Doubling Season (one of the few "combos with way too much stuff" cards I actually like) around the Volvers suddenly seems so much more.

Of course Volvers are pretty old by many standards. Worldwake was kind enough to give us the same sort of lego effect without the hassle of multiple colors of mana. I've mentioned Apex Hawks, Enclave Elite, Gnarlid Pack, Quag Vampires, and Skitter of Lizards just the other week (alongside Doubling Season, of course). If you draw one of these at any point you get to do something, but with extra mana you get quite a big bang for your buck.

The scaling effect isn't just about having something to do on any given turn; it's also about every game giving you something different. Creatures are never the same twice with a deck packed full of Lego critters. Spreading Seas and Tainted Well turn on your island- and swampwalk creatures, respectively, while giving you a draw, and as the game continues your army becomes ever more menacing as Everflowing Chalice and Doubling Season power out massive monstrosities. Wolfbriar Elemental can help you quickly recover if a Day of Judgment is passed over your creations. Just make sure you bring enough counters. 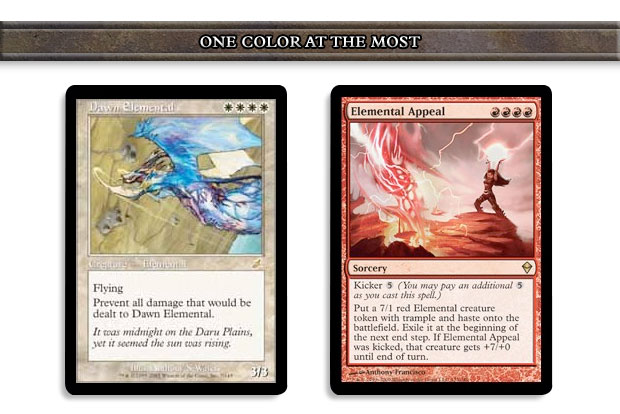 I used to think that I had a favorite color. It took some time but I slowly realized that I actually have a color I dislike the most (and I'm curious to see what your guesses are). While I can't really share in the experience as much, having a favorite, go-to color is an awesome thing. Ripping through the newest cards to find the next best thing to throw into your one-color deck certainly helps simplify sorting fresh booster packs. 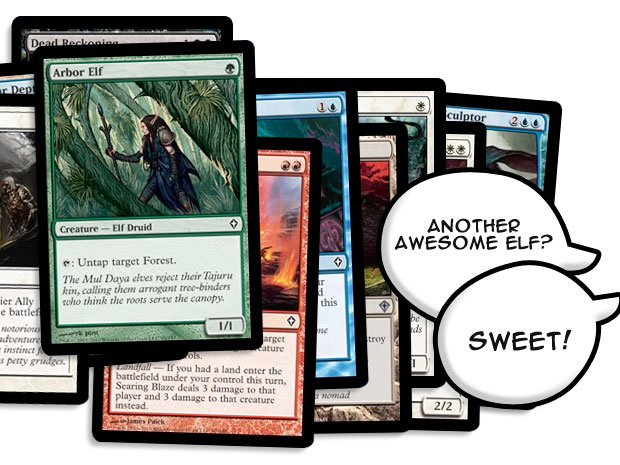 While the Invasion Block was the first block to handle all things gold, imprinting its multicolor theme into many of the cards with kicker, Zendikar and Worldwake have a distinctly different focus highlighting color-intensive effects. Elemental Appeal (a kicker card itself), Terra Stomper, the entire Vampire and Kor tribes, and others all appeal to mages of a narrow color palette. This isn't to say it's good or bad (in fact, grabbing the coolest of any individual color is always a neat thing) but makes for some interesting decks.

4 Marshal's Anthem 4 Honor of the Pure

4 Kazandu Blademaster 4 Honor of the Pure

While at first glance it's a White Weenie deck, it quickly becomes apparent it's so much more. While the Allies flood the board, you can bet your opponent won't be content to just let it happen—dudes are going to die and most certainly come of them will be yours. Marshal's Anthem powers up for the late game and makes this deck tick: not only are you getting back lots of creatures, they will likely all help pump each other up, and the Anthem makes them even stronger. Here, kicker (or, rather, multikicker) is the fine accoutrement that ties together the flavors of white.

Kicker can also amplify what a color does to an entirely new level.

What’s Yours Is Mine

Sometimes the best approach is to do what your opponent is doing and blue is the best color to that. Early blockers like Calcite Snapper and Wall of Deceit stem the flow of damage from your opponent's creatures while you ramp up into more tricky things. With Roil Elemental turning any lands you play into "I think I'll take that," you'll quickly amass quite a collection of your opponent's creatures, doubly so alongside a Vapor Snare—and replaying Halimar Depths every turn while we're at it doesn't seem so bad. Arctic Merfolk isn't just for show: with Roil Elemental and Ray of Command taking and borrowing creatures, you'll get full power for the Merfolk without the hassle of recasting your own creature. Sneaky!

Of course, blue can simply copy what it needs with cards like Clone. Rite of Replication is very similar to Clone—until you have the kicker element supercharging your copy effect. I don't think I need to get any deeper than asking how good it is getting five of the best creature your opponent has in play. Instead of a subtle hint of something synergistic, the Rite's kicker is the purest and strongest of the classic blue flavors.

There are well over a hundred distinct cards with kicker or multikicker, playing both within and beyond their colors. Whatever your taste or style, however you enjoy the game, kicker can be the powerful binder or soft hint that completes your deck.

What's your favorite thing about kicker? What do you look for when you think of kicker? There's something out there to kick up any deck.