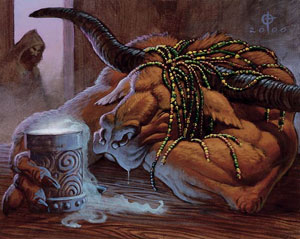 Sorry. I just can't seem to wake myself up these days. Because I keep hearing about your local play groups... And man, are they sleepy little burgs.

It's sad, and I hope you're not one of the people trapped in these awful, awful tar pits of players.... But it may be that you have a reactive group. Nobody wants to take the first shot, because everyone else will gang up on them. So everyone stays waaaaaaay back, playing slow defensive decks, parceling out their cards one agonizingly slow drop at a time, tapping out on turn eight to cast something huge and hiding behind walls and....

Oh! My apologies. I fell asleep again. Because honestly, who wants to play a game of "Let's stare until someone blinks?" No, you want excitement! You want big spells rocketing across the table, huge swings in life totals, stacks a-blazin', and some rootin'-tootin' excitement going on!

Wake the heck up!

Ah, but that's the problem, isn't it? Like Regis Philbin, you're only one man! How can you, a single player among a group of folks, get everyone a-hoppin' and a-fightin' and a-feudin' and a-fussin' and a'playin'?

It's tough. Because aggro is inherently weakened in multiplayer; you need to do a lot of damage to a lot of players, usually with a handful of creatures, and one stray Rough or Wrath of God can send your army tumbling into the graveyard.

So how do you give your fellow statues – I mean players – a good, solid kick in the butt and to speed up your local folks? Well, there's no one-shot solution that works for everybody, but you might try aiming these two decks at the cholesterol-clogged heart of your metagame.

Have Some Life, Pal!

This is what I refer to as "a combo beatdown deck" – which is to say that several elements have to come together to make it work. It's a common flaw among enthusiastic players:

And if you're playing the sort of attacking deck where everything has to go just so, why not just skip the combat phase and be done with it? Having to carry your death to someone on the back of a creature – the most vulnerable card type in the game – is just suicide.

But one of the things that had been bugging me was the prevalence of Mono-Black Control decks at the table. Despite the fragility of aggro, I like winning via the attack phase, and the MBC decks a-plenty were killing me with their Innocent Bloods and their Barter in Bloods and their Diabolic Edicts and their Chainer's Edicts and their Mutilates and oh, Corrupt you for thirty GG thanks.

With the exception of Diabolic Edict, though, all of those were at Sorcery speed. I wanted to have a deck where if Mister Mono-Black decided to pass his turn with no creatures out, he would pay dearly for it. And thanks to reader Joshua R, who suggested this crazy deck back in The Howling Mine Effect, I decided to try to put it all together.

And as it turned out, it worked beautifully.

Adam was playing a blue/white control deck, and Ian was playing the Beast deck that I mentioned last week. I don't know what Jack was playing – something with Plains – but by God, it didn't matter.

See, I had a third-turn Forgotten Ancient (thanks to some Sakura-Tribe Eldering), and it had accumulated a healthy dosage of seven counters over the next two turns while I played Kavu Predator and waited for it to survive long enough to lose its summoning sickness.

They looked at me blankly, until they doped out exactly what this all meant. And that was the best moment of the entire evening. See, if you're a sadist like me, you know there's nothing better than watching three players exchange panicked glances, realizing that something horrible is about to happen to all of them, and doesn't somebody have an answer?

"That's fine," I said, lobbing a Healing Leaves at Jack. "Here, Jack, have three life!" But you know, he didn't seem grateful at all.

Then I swung with my 23/23 Predator at poor Adam (who had committed the cardinal sin of tapping out on turn five), leaving him at 3 life, while I sent my gigantic Ancient at Jack. Whew, they said, thinking that my turn was over. But no!

"Seize the Day?" I asked, and they read the card and blanched. I smashed Adam out of the game.

There was some discussion about what to do the next turn, but Ian was playing green-red and had nothing to handle a 23/23 monstrosity, and Jack didn't draw an answer. On my next upkeep, I transferred 10 +1/+1 counters from my Forgotten Ancient to my Predator and attacked.

"Spore Cloud," Ian said with some satisfaction. "His creatures won't untap during their next untap step. Let's kill him in the next two turns." And lo, he tried.... But he forgot to read what Seize the Day does, and tapped out to summon a Krosan Colossus. To instruct him in the ways of flashback, I paid the three, untapped my Predator, and smashed past his defenses, leaving poor Jack precisely one turn in which to draw a Wrath of God. He didn't.

Three players dead on turn seven – and that's with me giving them 5 life apiece. Not bad for a creature deck!

Now. As I said, that's the combo – and the danger of playing a combo-style deck is that you don't always get to go off. I then played two more games with it that evening, and neither time did I draw the Kavu Predator combo (or I had no Anger and a deep need for haste when I had it), and as such I played a slow game and died.

I can tell you when this deck is good. If you're playing in a reasonably small crowd (3-4 players), and your group has been slanting towards control decks, this deck can do one hell of a job on them.... Once. After that, they'll know precisely what to expect and hold stuff back. But that one time may be enough to shake up your group. You can punish a control player who taps out very severely, which leaves him open for other control and aggro players.

That said, here's a few hints on playing this deck:

That's not enough for you? Well, take a look at Jack's deck. Jack's new to us and relatively new to Magic, but there's one thing that he likes: quick games. Jack likes the attack phase, he likes big splashy plays, and as such this deck is perfectly suited to his style. Here's his deck, as he's built it, with the cards he has available:

A little untuned, but then again that happens a lot in casual. You play with the cards you have, and Jack's still building his collection. There's an argument to be made for focusing it like this (and besides, what kind of Magic writer would I be if I didn't decide to "improve" someone's decks? Hey, Wizards is practically paying me to meddle!):

But you know, even with the untuned deck, Jack's transformed the nature of our local metagame. Before, you know you had a lot of turns to get set up. Everything was a slow build into an overwhelming advantage, and the majority of the strategy came from the cat-and-mouse nature of trying to take down your opponent while not exhausting your own resources.

Jack came along, and suddenly there was some real ugly. Either you killed Heartless before it went active, or the game got a lot shorter.

Mind you, this is not the deck to play if you always want to win. Like the Kavu Predator deck, this is often an all-or-nothing gamble: you make the big power play or you wind up praying for your opportunity to punch through. You'll almost always have a crazy big effect upon the game, and you can often play kingmaker, but you don't always get to be the king. And sometimes, especially when everyone's at 3 life or so, you force a lot of draws with an Earthquake.

But still. Our group was slowing down a bit, and I heard about Jack's deck long before I saw it: "Man," they said, shaking their heads in admiration, "That cut our game time in half!" He didn't win every game, but he sure put everyone on a nice quick clock.

And that's what it's about, baby. Clocks. Speed 'em up. Get those doggies rollin'.