A Celebration of Magic
in Pictures

here are few things more rewarding than watching young players play Magic and knowing that you had a big part in making that happen. When the signup window for the Magic Celebration came, I jumped at it. There is no single Magic event more kid-friendly than the Magic Celebration! Everyone gets a pack of Magic 2014 and a sample half-deck of the color of his or her choosing. Each player makes a thirty-card deck and plays against anyone else there. It is a great way for new players to start into organized play. There are no rounds, so you are always playing.

Based on my previous tournaments, Wizards of the Coast sent me a box of M14. I talked to our store owner and explained that I already had more than twenty players signed up and we needed to find a way to make this work. We split the cost of another box, used twenty of the sample decks left over from another promotion, and we were all set to go! We ended up having just enough for the thirty-two players who attended! 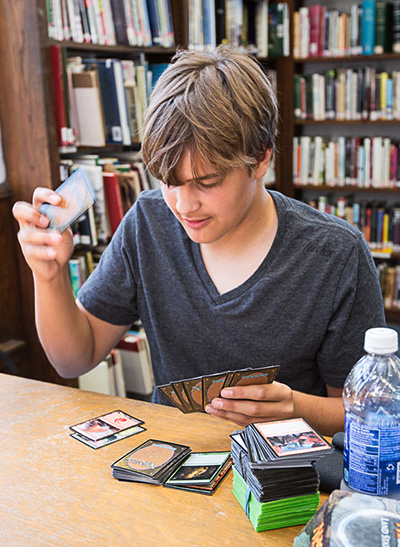 Spencer prepares to make his first play of the game in the Avacyn RestoredMini-Masters tournament.

As a way to spice things up and encourage players to sign up early for the Magic Celebration, I offer the first sixteen players to sign entrance into a single-elimination Avacyn Restored Mini-Masters tournament. Every round, the deck size would get a little bigger and the remaining players would rebuild their decks. With sixteen players, this required thirty packs of cards, and I happened to have an open box left over, so we did it. This is what happens when the TO has a spare open box of Avacyn Restored and is looking to make the Magic Celebration a little more special. The kids pulled some great cards, and Spencer went all the way to the finals! 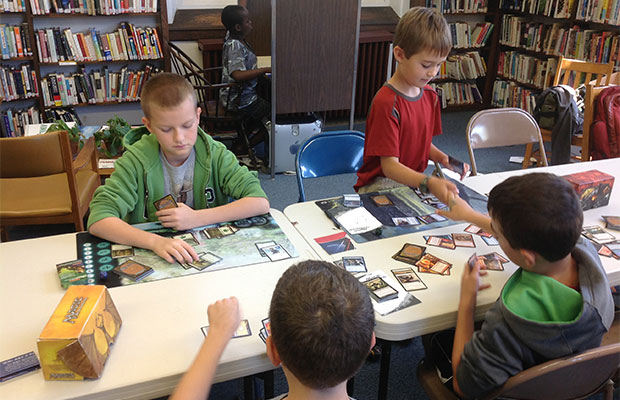 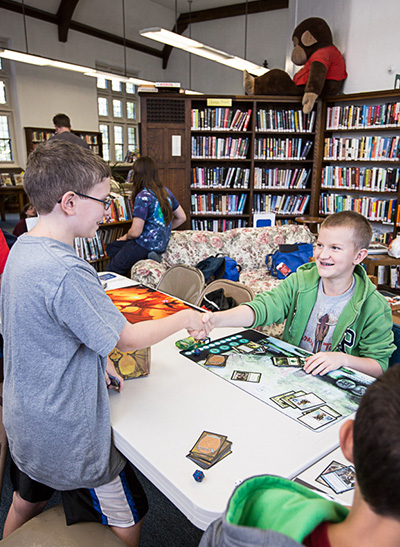 Simon and Sam follow suit at the end of their game with a handshake as well. They had quite the battle and both players always demonstrate great sportsmanship. The game ended with a flurry, and the handshake seemed very appropriate. I think this is something I will be more actively encouraging at future tournaments. And in case you're wondering, this was not a case of sick rub-ins. Both players offered the hand at the same time. 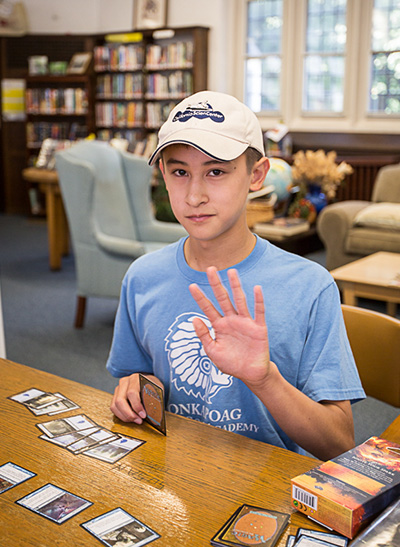 Tim is one of our quiet players. He and his brother are regulars at the tournaments and it seems like one or the other is always doing well. Don't be fooled by his friendly demeanor, the boy plays some mean Magic! 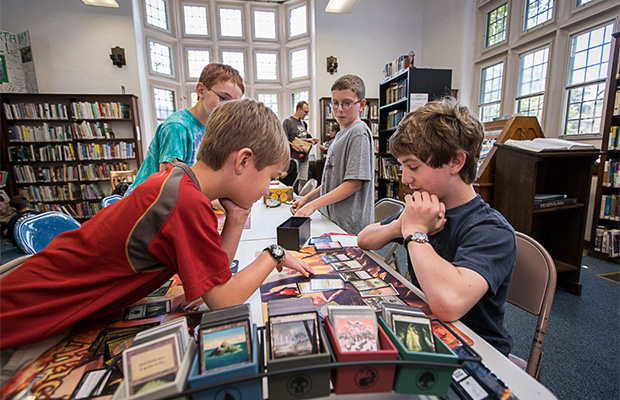 Here Sean and Willie battled it out. Sean has made some significant leaps in play skill over the last few events. Here he was working out the on-board tricks while Willie watched. In the past, Willie would have just explained everything to Sean, but he has learned the value in letting the players younger than him work it out for themselves.

One of the joys of being a tournament organizer for these players is watching the leaps in analytical improvement as they get older. Sean would lose games to on-board tricks that he just couldn't see before. Now he is starting to understand how synergy between cards can make all of them so much better. 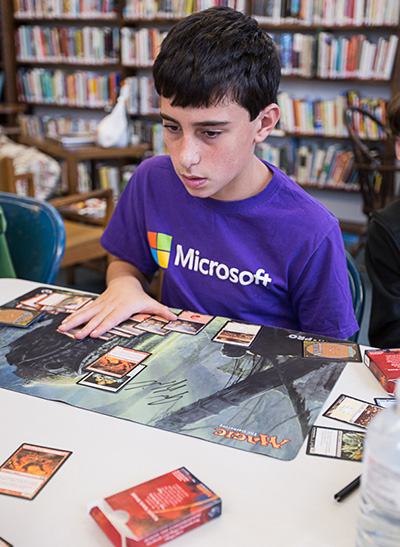 Jack is probably one of the top three players in the group. He seems able to play aggro or control equally well. I have only played against Jack a couple of times, but I don't think I've ever beaten him. Of the players in the group, no one gives that blank "I'm giving away nothing about the contents of my hand" stare like Jack. If Jack continues to play and improve his game the way he has to this point, you'll be hearing about Jack in the future. 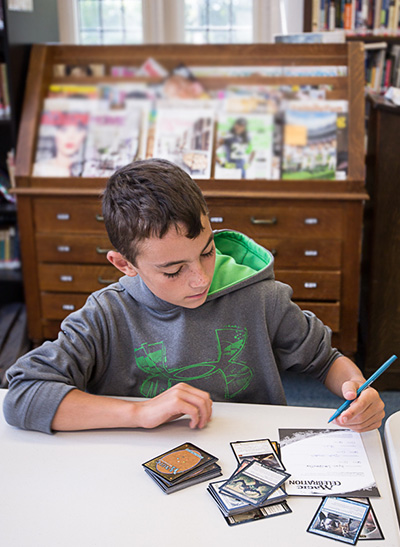 This is Jack's brother Matt. Matt will talk to you during the match and enjoys all aspects of Magic. Matt has a relaxed attitude in game and is just always enjoying himself. Don't be fooled though. One minute you're talking about his last soccer game, and the next you're down a game and shuffling up for Game 2. Matt may not be quite as good as his brother, but when Matt beats you, it somehow doesn't feel so bad. 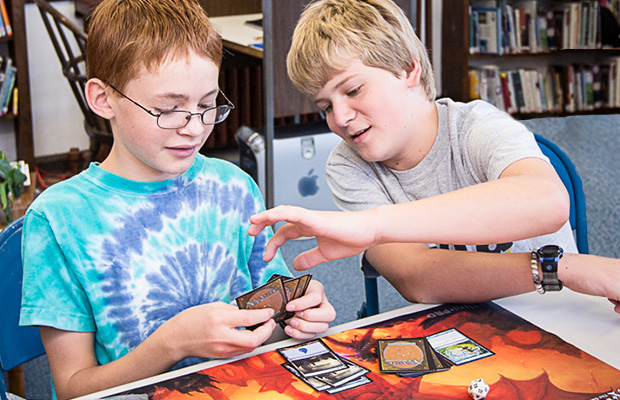 Jacob prepares to make the next play, while Andy makes some suggestions. This is not something you want to see at a tournament, but with young players at an event with no REL, this just seems like a good idea. I want them to learn, and hearing what other players think are possible plays can open up ideas that you may not have considered.

Jacob is a talented young player who sees card interactions in a way that belies his age. This talent is beginning to show itself in our tournaments. I expect Jacob to be sitting at the top tables more regularly in the coming year. 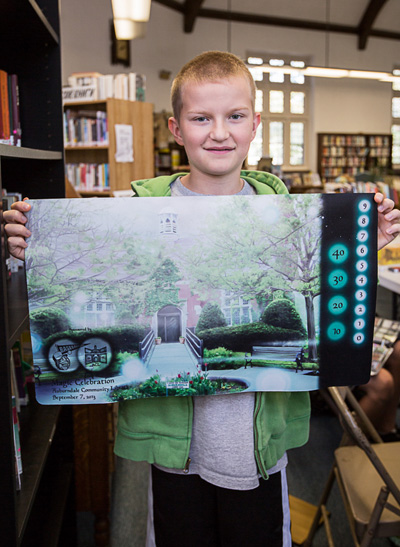 Simon was one of three players to win this playmat as a door prize! That is an image of the library where all of our tournaments are held. When I started to set up, I laid out one of the mats in the middle of the play area so everyone could see them. Everyone quickly recognized the library and knew this was something unique to just our group. When I showed them the ghost in the doorway as well as the treefolk and characters in the trees, they thought it was amazing!

I want to thank the library for providing the picture, Emily Alexander for the Photoshop wizardry, and inkedplaymats.com for getting them done up. The kids loved them and these will be door prizes for future events. 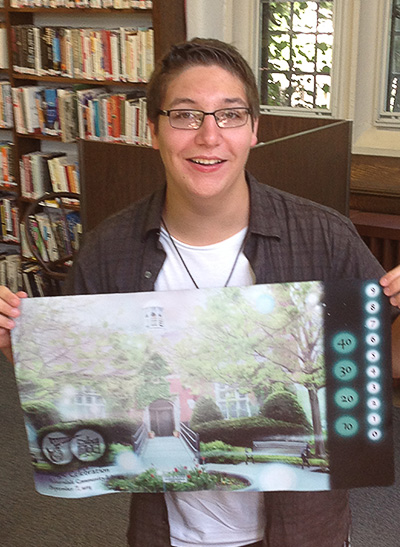 This is Griffin, the Mini-Masters tournament champion. The prize was the playmat, so everyone was gunning to be the champion. After a hard-fought first round, Griffin cruised through the next two rounds, where he defeated Spencer in a well-fought 2–1 match to take the prize.

Griffin started the group that began playing Magic at the library years ago and has been the one constant from the start. He is the best player in the group and regularly plays, and does well at, SCG and TCGPlayer events, PTQs, and GPs, when they are in the area. He is a step or two away from Top 8ing, but I'm sure it won't be too much longer. 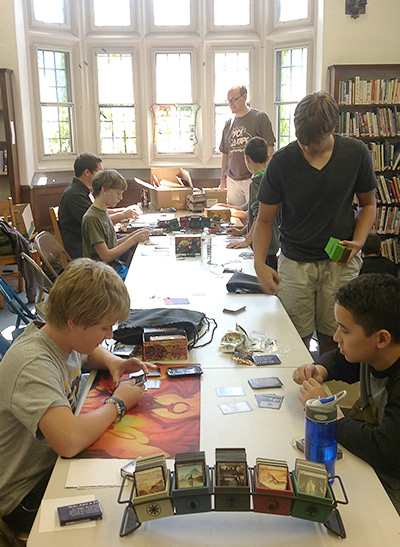 In spite of the Avacyn Restored Mini-Masters ending, the Magic Celebration continued. Andy and Jon continue the battling while Spencer collects his things.

The bay windows are just a part of what makes our community library such a great place to play. Our library is very small, and our tournaments pretty much take over the entire library for a Saturday. The volunteers who run the library have been great. The regular tournaments and weekly casual games have become part of the vibrant library community, thanks to all the volunteers involved.

My thanks to Aaron Shi, one of the regulars in my Thursday-night multiplayer games, for many of the photographs in this article. He has a true talent for photography and lends his skills whenever I need them. He gets credit for all the great pictures in this article, and I should get blamed for any of the crappy ones. These articles wouldn't be possible without him.