f you came looking for a theme, I apologize. It's Mana Week here at DailyMTG.com, and while I truly enjoy generating oodles of mana and doing the things oodles of mana allow you to do, I wanted to strike something else while the iron was still hot. (And there is a little mana-related goodness below, just not what I'd call on theme for the week.) 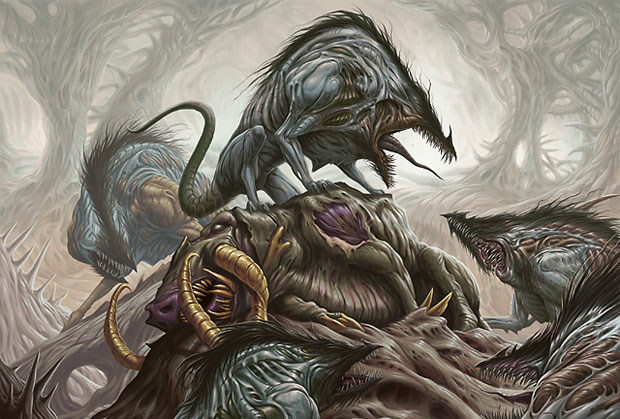 New Phyrexia is hot out of the boxes, and last week's lap around ways to use booster packs got me hungry to do some drafting. While many players immediately think of Limited in terms of eight players and duels, my addiction comes in the form of four players and a hilarious multiplayer game: Group Game Draft.

While I've shared some game play around multiplayer Limited before, and there's definitely some fun action included today, I realized that there are tons of discussions about drafting for duels and virtually nothing detailing drafting for multiplayer (and the fun that can be).

Time to get cracking.

A Story of Four Packs

Drafting a Group Game Draft is an interesting experience. Thanks to the Rumble Rule—if you're unfamiliar, remember to check out the full Group Game Draft format coverage—and flexibility to pick more interesting things as the draft goes on, picking through four packs is a fascinating exercise. 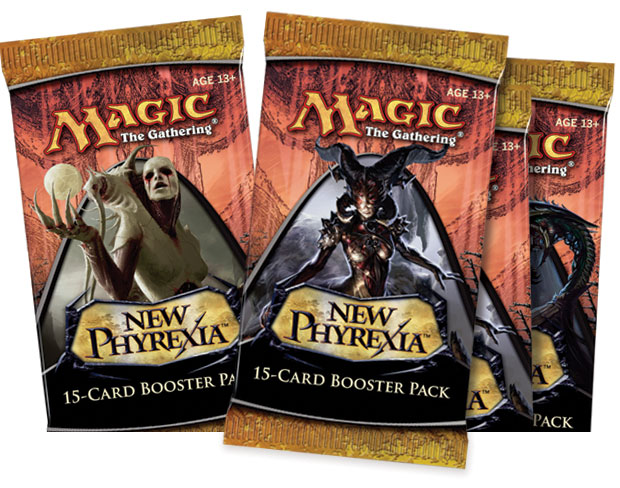 And a set like New Phyrexia is precisely the kind of set that's fun for multiplayer:

My "plan" was pretty straightforward: grab ground-pounding beef (like Thundering Tanadon and friends) backed up by any Regrowth-like spells (the usual graveyard good-stuff type multiplayer deck). While I would gladly grab any of the Splicer creatures—I can't really describe how much I love tokens—I was betting that others would be after them too. 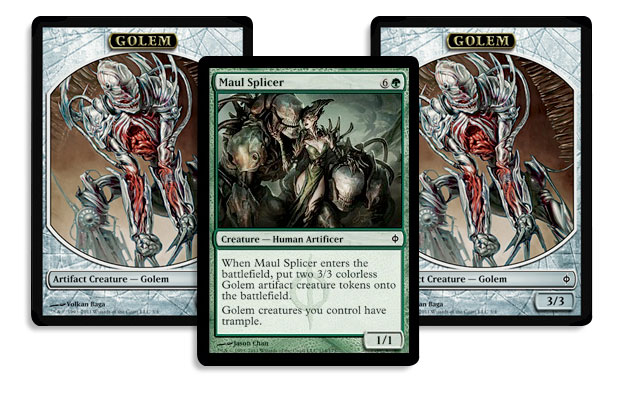 Without much fanfare, here is the breakdown of things I picked, and when I picked them, through all the New Phyrexia boosters. (It also doubles as a complete listing of the card pool for my deck, so there!)

I've noted with an asterisk (*) cards that I grabbed specifically as a rumble card.

I was lucky to snag one of the most unexpected cards to rumble in: Soul Conduit. Since rumble cards are cast without paying their mana cost, I knew I'd easily be able to cast it and immediately push six mana through it for an activation. While it's not as sexy as some massive Dragon or Angel, a sneaky life-total swap could be far more devastating given the right timing. 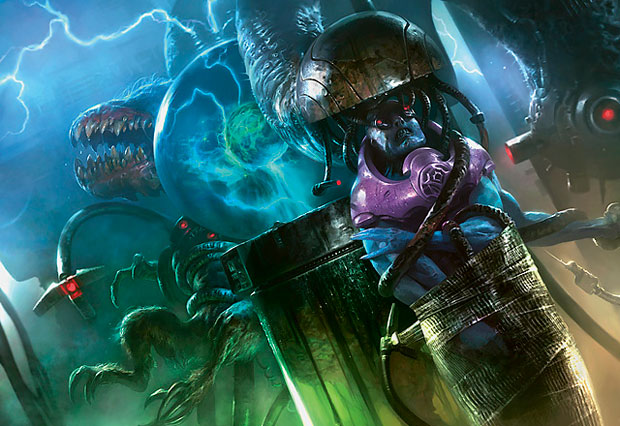 Assuming, of course, that's something I'd want to do. (Foreshadowing: It didn't work out that way.)

Aside from plotting rumble shenanigans, I also managed to grab one of the "bonkers" cards of drafting multiple packs of New Phyrexia: Rage Extractor. With all of the Phyrexian mana being thrown around, a card that turns half—or more!—of your normal spells into ones with a Lightning Bolt-esque rider attached is as awesome as it sounds.

JD, one of the ringleaders of the Group Game Draft who first showed me the format, tipped us off last week by drafting two Extractors and getting both onto the battlefield early. He added a liberal dose of Pristine Talismans and rocked the table with double triggers. It's wasn't quite Breath of Malfegor level interaction with earning rumble points, but the Demon Dragon's breath couldn't also kill creatures.

With my more traditional approach of beefy guys, this is the deck I cooked up from all that:


While just enough small fries to have something to do early on, and a Rage Extractor for the end of the game, I knew I'd have enough stuff to do every step of the way.

The only question that remained was "How would it do?"

Staring down the familiar faces of Brendan, Mo, and Min—all grizzled veterans like me—I knew I would be in for a wild ride. 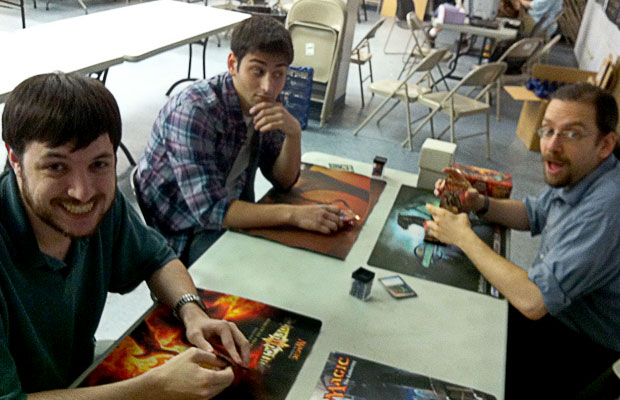 The game was fairly quick, too, being driven by the consistency of drafting four of the same smaller set. Normally, these games start pretty slow, with everyone just playing lands and, perhaps, a small fry or two that do a little work for the player (think things like Viridian Emissary and Prodigal Pyromancer).

This time, however, was different. 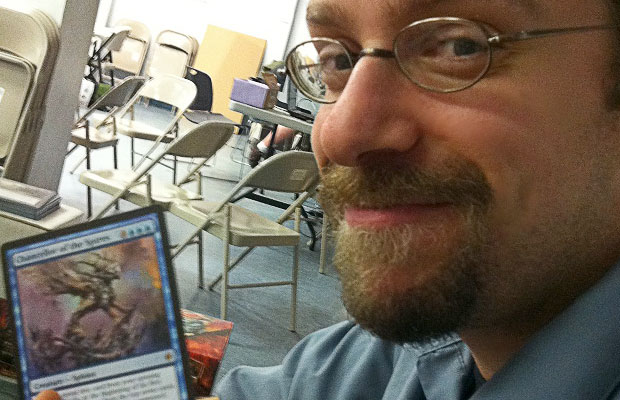 Uh, before everyone starts, you should see this.

While I was playing first, Min had one of those newfangled Chancellors, specifically Chancellor of the Spires, and we all had to put the top seven cards from our library into our graveyard. 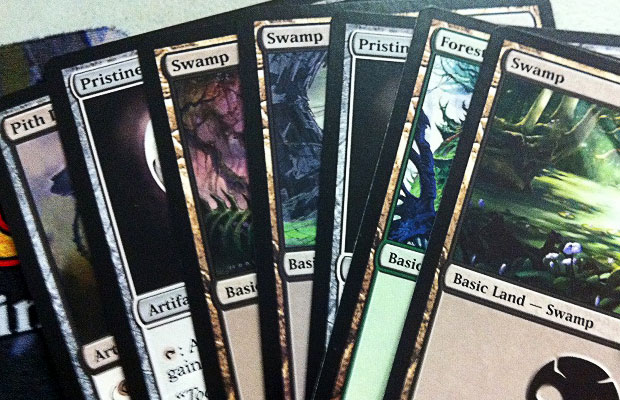 The double Entomber Exarch and Noxious Revival that were in my opening hand didn't mind this.

While Mo and Brendan didn't particularly enjoy the occurrence—"My Islands!" Mo exclaimed—I actually liked it as I proceeded to play Noxious Revival at the end of Min's second turn to go to my third turn with Pristine Talisman on top of my library, and follow up the turn thereafter with Entomber Exarch to pull up the Pith Driller. Sweet!

Coming out of the gate on the first turn with Vault Skirge and third-turn mana ramping through the Talisman put me out there as the center of attention. While my usual plan of attack in a Group Game Draft is to hang back and slide by as unnoticed as possible, I decided instead to play as the villain of the table and deploy as many Phyrexians as possible over the following turns, specifically:

My forces rallied behind me thanks to some nice draw step help, it didn't take long to rack up almost 20 rumble points and the entire table's undivided attention.

It was like some weird form of Archenemy where I didn't have schemes. All I could do was continue to do what I was doing. My sights were set squarely on getting to rumble something.

Brendan eventually found a frightening Phyrexian Swarmlord, and Mo immediately answered with Melira, Sylvok Outcast. It seemed like the game would be either a lockdown or a slow beatdown in my favor as things wheeled to me and my freshly drawn Rage Extractor.

After deploying the devastating artifact, I was able to cast my Apostle's Blessing (which knocked Min out from his last 2 life) and immediately rumbled into a Slash Panther, with the Extractor's trigger pointed at Brendan's Swarmlord. I was going for the throat and jockeying to begin closing the game out. 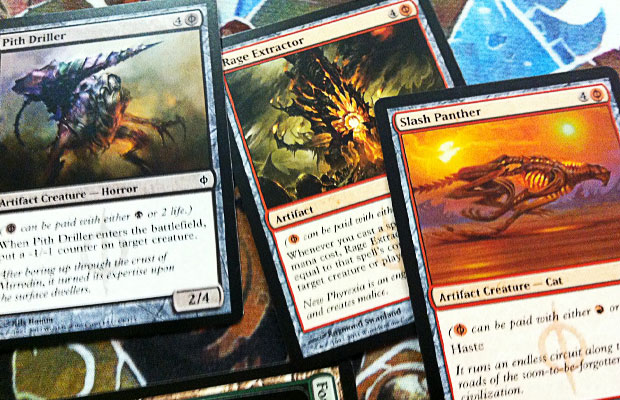 But mostly it just raged (against other player's creatures).

Boop! Was the little sound that erupted from Brendan as he cast an Apostle's Blessing of his own to protect his Swarmlord from red. While knocking Min out had removed the Numbing Doses on my Skirges, it didn't untap them, and with Brendan having a way-to-big-for-my-guys-guy I was left to only attack with a solitary Skirge against Mo. Not exactly what I wanted, but I thought I could hold out and try again next turn.

Thundering Tanadon from me, another attempt to zap the Swarmlord, and another protective Apostle's Blessing from Brendan.

I attacked Mo with several dudes equally sized to his, only to watch Mo put Leeching Bites to brutal effect. I then cast a Pith Driller, again going for blasting the Swarmlord with the Rage Extractor trigger, and again seeing Brendan gain the upper hand with a third Apostle's Blessing. I guess we know where they all went!

With all the ways to save the Swarmlord played out, Brendan ripped the top card he needed and finally delivered the coup de grace: a Parasitic Implant on Mo's Melira, Sylvok Outcast. 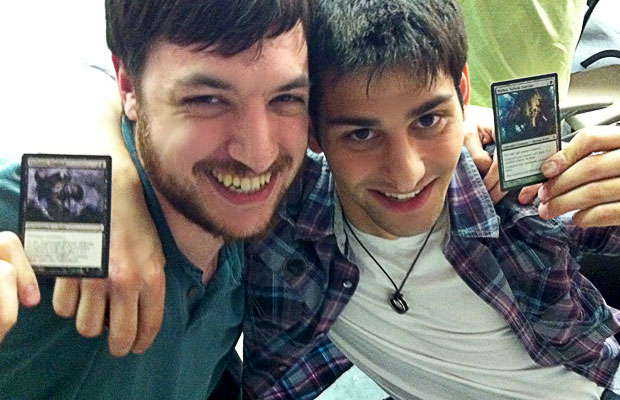 A gift from me to you, buddy.

With Melira out of the way Brendan finagled some infect damage to me. Despite the 30-odd life or so I was coasting with at this point, and the powerful interaction of Rage Extractor and plenty of cards with Phyrexian mana costs, Brendan quickly amassed a horde of 1/1 green infect Insect tokens.

And then attacked me with them. 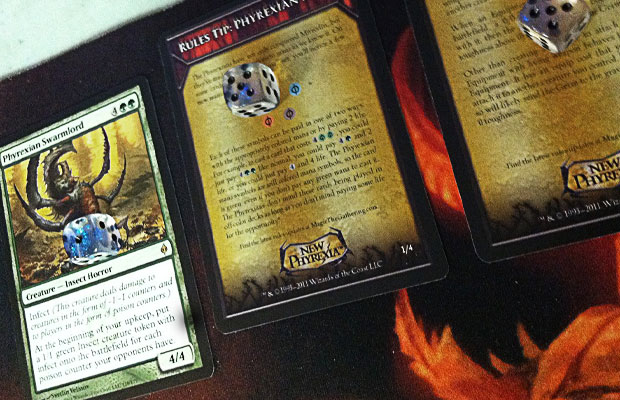 Go forth, my minions, and strike into the very heart of the enemy!

After I blocked as best I could, I thought I was going to go to eight poison counters and get one more turn to do something. But, alas, it was not to be. 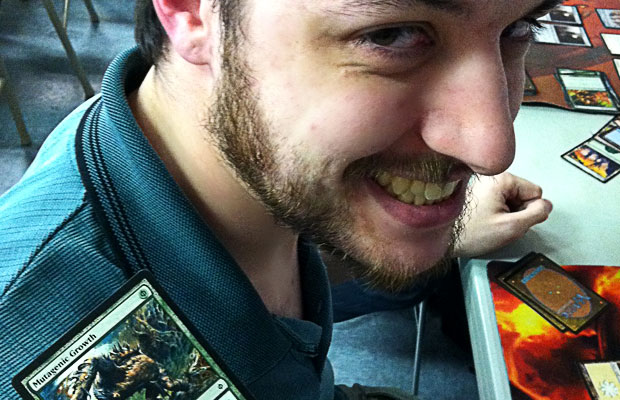 I've got your 'Boosh!' right here!

Mutagenic Growth for exactly ten infect damage was the second sweet moment for Brendan on the day. Being in the driver's seat doesn't mean you can't crash into a wall, and I didn't even see it coming!

With only a few blockers and no way to wipe up the board full of infectious friends Brendan had built up, it was only a short pair of turns for Mo to go from zero poison counters to too many. With Brendan's victory, all the skies outside the store opened up outside to deliver a double rainbow in appreciation. 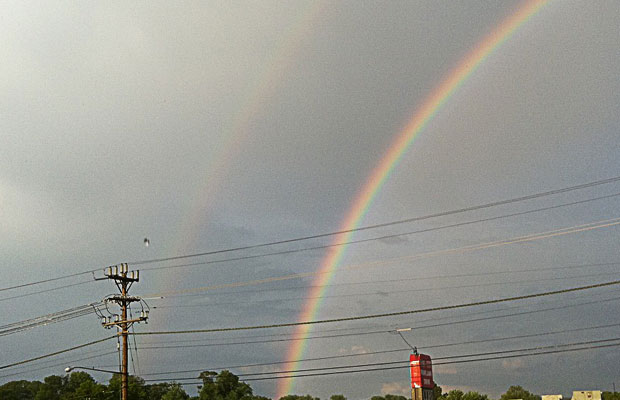 Who said Phyrexians don't appreciate natural beauty when they see it?

Last week I had asked everyone what they thought of the collected, but not truly compleat, breakdown of Limited formats. Here's what you have to say:

Most of you liked the concise cluster of format information, and it's definitely something I wanted to do again in the future. (No worries—this won't happen quite so soon.) I do have another question for you this week, and if you're curious about one of the upcoming products and want to provide feedback to me, this is your dovetailed opportunity of the week!

Thanks for stopping by! Join us next week when revisit the past for some present action. See you then!