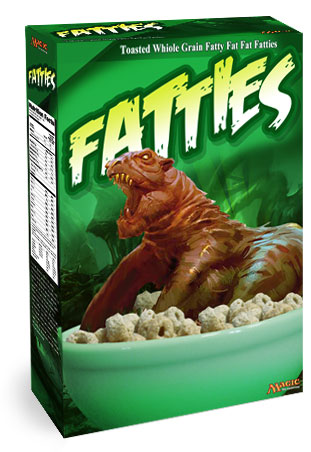 here's a lot to be said about subtlety. The slight suggestive poise of the cards in your hand, reaching for where you keep track of your life, arranging lands in particular configurations, even just looking through the cards in an opponent's graveyard can play into weaving a web of intrigue and deception. "Playing the players" is an age-old strategy that predicates on understanding virtually everything about the game. Magic, too, has proponents of this approach, and you can find discussions all over the internet pointing to this as "the" way to play.

Without too much fanfare, I firmly believe that the only true way to play is the way you want to play. Magic means many things to many people, but it's only pursuing what it means to you that can lead to excitement. One of the things that Magic means to me is hitting my opponents with big creatures: the fatties. Fatties are more than just brutes to dominate the battlefield, but an essential part of my everyday Magic.

Of course not everybody likes the fatties, especially when one is heading their way during combat. Everything from Saprolings and Goblins to Giants and Angels will step in front of an oncoming assault to protect their masters. To compensate for this, many of the biggest, baddest fatties have the keyword ability trample, which, as the name would suggest, lets them trample weaker opposition to still hit their targeted player.

But sometimes trample just doesn't cut it. Whether it's a Wall of Frost that stops the attack cold (literally freezing the fatty in place for a turn) or a Vampire Nighthawk that will soak at least 5 damage (3 from required lethal damage assigned to it plus the 2 life the lifelink will gain simultaneously) while taking the trampler down with them (thanks, deathtouch), swinging with big dudes isn't easy. Even taking a dip into the dark side to bring removal, like Doom Blade or Path to Exile, will fail against classic defenders like Wall of Bone and new stoppers like Wall of Denial (which has flying to boot!). 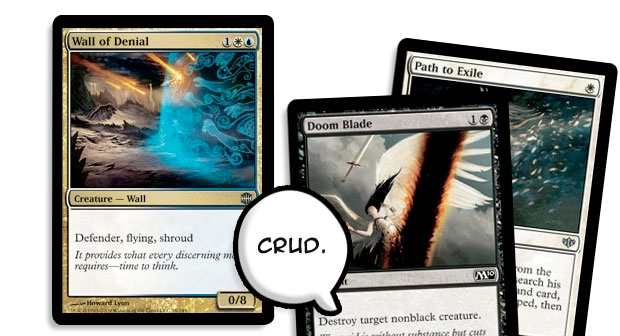 It's almost as if there needs to be a creature so strong and powerful it doesn't just trample over or try to get by some other way, but absolutely blasts the opposition outright; a creature whose mere existence could give pause to those whose faith in their defenders and deterrents to consider other courses of action.

A creature of such sheer power now exists and, if you dare, take a :

Of Crushing the Opposition (and Everything Else)

Novablast Wurm isn't like much else out there. There are creatures that can destroy other creatures, sure, but nothing like an attacker that simply decimates everything else, friend or foe, first—before defenses can even be readied. Here are the rules facts you should know: 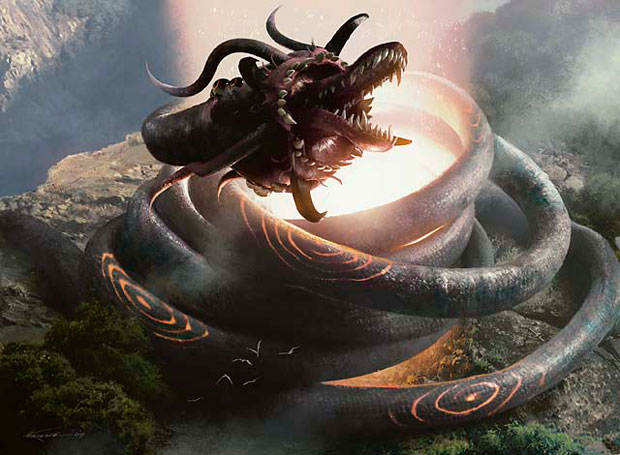 It's also important to note that Novablast Wurm isn't playing off of any special features or themes in Worldwake. It's simply an epic beatstick that will refuse to walk softly. This is the new poster child for "It's gonna' get'cha!" type fatties: the Wurm that brings its own Day of Judgment for everything it sees. While we use repellent to keep the small crawlies away from us, this guy brings a can of "Blocker-be-Gone" to every battlefield get-together.

Aside from the obvious advantage of toasting nearly any critter an opponent could produce, there is much more to the Novablast Wurm than just blowing up blockers. There are creatures that you would want to die—creatures like Academy Rector, Rukh Egg, and Protean Hulk—in order to make the most of them. 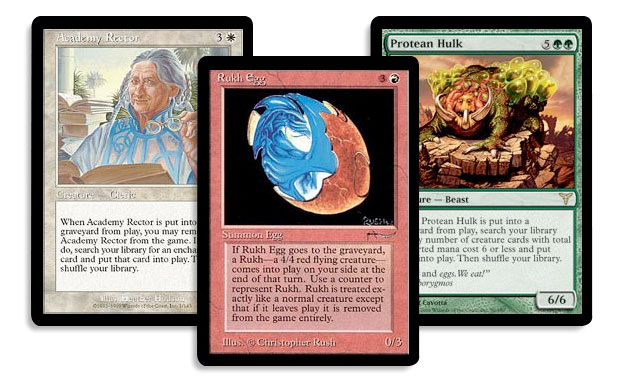 Creatures with abilities that are active in the graveyard can also benefit from the free trip the Wurm would provide. Genesis and Anger together can allow you to make the most of anything that has been binned by getting it back to your hand and giving it haste when it comes back onto the battlefield.

Perhaps the most logical creatures to try with the Wurm are creatures with persist: they bounce right back the first time they die, and many come with neat abilities. Throw in an Oran-Rief, the Vastwood for the green creatures with persist, and your combat step becomes a triggered ability stack-fest. Filling it out with creatures who are more for their "enters the battlefield" effects than what they do when they're sticking around seems perfectly fine.

With Harmonize and Fecundity keeping your hand full it should be straightforward to bash the game away. Woodfall Primus and Kitchen Finks will work their magic every turn as long as an untapped Oran-Rief, the Vastwood and Forest are waiting for their persistence to pay off. Sakura-Tribe Elder, Rampant Growth, and Harrow all you ramp ahead while Worldly Tutor grabs your new friend whenever you're ready. 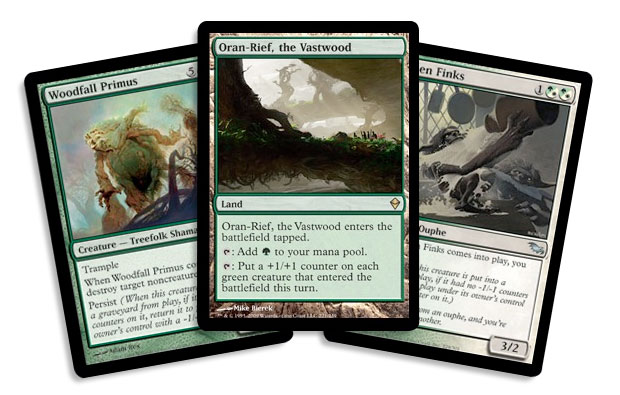 While Novablast Wurm doesn't seem to play nice with his teammates, it doesn't have to be that way. If you actually prefer to keep your other creatures there are a few ways to do that (aside from not attacking with the Wurm). Shield of the Oversoul can protect one of your fleshy green minions, and Shield of Kaldra is as Novablast-proof as Equipment comes. Fellow mighty luminaries Darksteel Colossus, Myojin of Life's Web, and Sapling of Colfenor all come with the insulating protection of being indestructible as well. However, it's from Zendikar that the broadest protection comes: Eldrazi Monument. I guess whoever or whatever the Eldrazi were had to deal with these Wurms before. 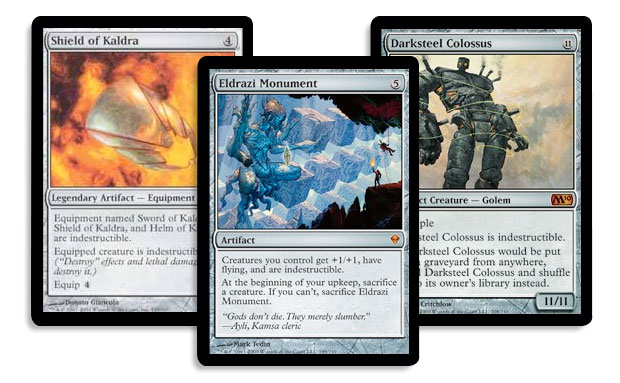 Decks that produce token creatures are a natural fit for Eldrazi Monument. There's nothing like building up an army to storm the castle of other player's life total and tokens becomes very non-trivial when they simply cannot die. Both green and white have an array of token-producing capability, and a deck built for tokens could look something like this:

Token to the Limit

3 Captain of the Watch

Between suspending a Benalish Commander, casting a Captain of the Watch, or making a Conqueror's Pledge against your opponent, Soldiers should be in sure supply as the games goes on. Match up your Solder tokens, all of which will start out as greenhorn 1/1s, with Soldier leaders like Field Marshal, Daru Warchief, or Captain of the Watch, and your army grows ever stronger.

While this looks like just another Soldier deck at first glance, the simplistic nature of "drop dudes, swing in" should lull your opponent into a false sense of security. A little green for Dauntless Escort doesn't seem out of place given it's a Soldier itself, then ... WHAMMY! Novablast Wurm drops into the game. 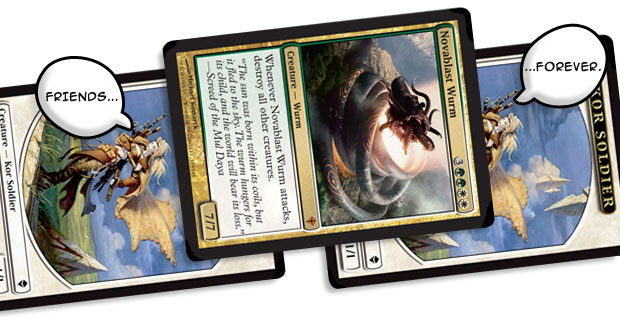 Whether it's the aforementioned monument making your Soldiers resolute or the noble sacrifice of a Dauntless Escort, you should be able to drop your Wurm, untap next turn, and swing with the team—everyone unblocked. Who said big guys and small fries couldn't be friends?

It's certainly fun to think about all the ways to build straightforward decks around Novablast Wurm. But there are some other places this newfangled fatty can go. EDH, the immensely popular casual format I just can't stop talking about, is a great place to bring out your Wurm. Saffi Eriksdotter works well to recycle creatures (like one of those the Wurm will blast away), Rhys the Redeemed is the green and white token deck general (and one that I happen to be looking forward to adding the Novablast Wurm to!), and Chorus of the Conclave will let you dump a ton of mana into the Wurm when you cast it ... making it even beefier as the soon-to-be-lonesome titan! 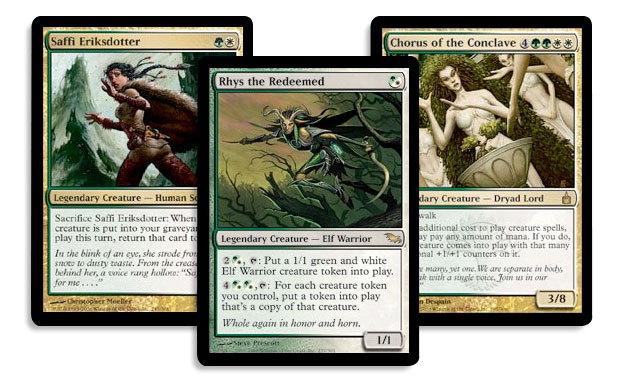 The Stack (click here for a quick refresher if you need it) is something I really enjoy and that many of you seem to have tried in one form or another. If there is a better fatty to land on a chaotic, shifting board than this board-clearing-removal-meets-beat-stick, I can't think of it. Aside from the modestly unpleasant nature of a creature knocking away every other creature on each attack, Novablast Wurm doesn't have any inherent protection itself. Wacky cards like Backlash, Lignify, and Coma Veil are all fine ways to answer the Wurm without just running every black kill spell known to man. 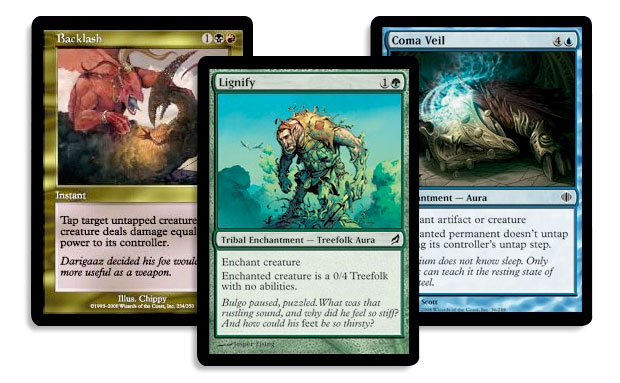 Type 4 (the refresher is here) is one place where Novablast Wurm can shine completely. When every spell available is just as over-the-top amazing (like Decree of Pain, Biorhythm, Inkwell Leviathan, and Iona, Shield of Emeria) the high expectation for each card anyone draws leads to an unexpected sense of balance. Virtually every card provides something just as powerful—or potentially even greater—and there isn't any way to predict who will play what next. In as random of a format as this, you'll earn major style points for finding a Darksteel Colossus to buddy up.

The possibilities for Novablast Wurm may not be as broad as other creatures, but with a Wurm like this, do you really want any others? Where will you put the wurm? Sound off in the forums and I'll see you next week!