The Crux of the Matter

And let me tell you, I've seen some big things in my day. A Hamletback Goliath we stopped adding counters to because it was already going to be instantly lethal to any creature or player on the board.... A War Elemental in a six-player game that got so large we had to stop using ten- and twenty-five-cent coins as single counters and start using them at face value.... An Our Market Research Shows That Players Like Really Long Card Names So We Made this Card to Have the Absolute Longest Card Name Ever Elemental that got enchanted with Wordmail in one particularly memorable Unhinged draft....

Yeah, I know a thing or two about "big."

Whoa... I told you it was big! We're going to have to do this a little bit at a time. Looks like we're starting with the name.

...Okay, maybe not. But still... "Primalcrux." Yeah, we can work with that. It's obviously made up of two real-world words: "primal," meaning "totally," and "crux," meaning "awesome."

And it's green, too—my favorite color! 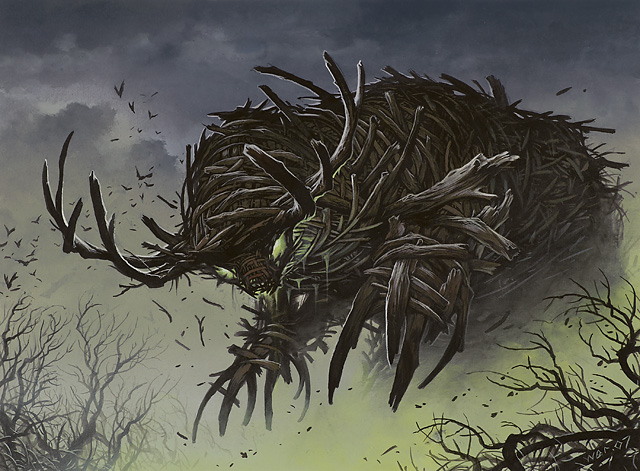 A name made up of two real-world words and a body made out of a usually inanimate material, you say? That sounds like...

Bingo, an Elemental! One of these days I'll have to finally build that Horde of Notions deck... but not right now.

So it's huge, it's green, it's an Elemental, and it's a "primeval, central feature." I can't stand it any longer—how big is this thing? Let's zoom straight down to the power / toughness box! 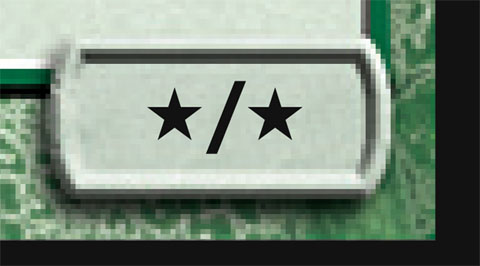 It might not seem like it, but that is one exciting power/toughness. There are some great green creatures with stars down in the lower right; Multani, Maro Sorcerer was my favorite back in the day, and Eventide's Overbeing of Myth debuts near the top of the list.

Granted, */* in and of itself doesn't tell us much, but to me, those pretty little stars have always meant one thing: a power and toughness so big they wouldn't even fit in the lower-right corner.

Chroma... Right, that's the new ability word I heard about in today's Planeswalker's Primer video. Simple enough, just count up the green mana symbols on all the permanents you control, and that's how big Primalcrux is.

Is... Is that big? How big is it likely to be? How big could it be? I mean, it's limited by how many green mana symbols I can cram on my permanents. I usually play out a lot of permanents, no problem, and I've never shied away from green mana. But what if I don't have any other permanents? What if I play Primalcrux on an empty board after some villain plays Wrath of God?

How much does this thing cost?

My friends, I give you the new greenest creature in Magic: 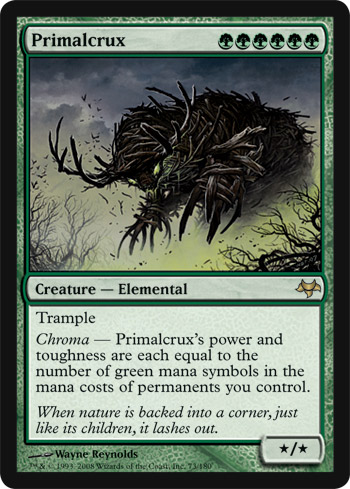 Awesome Things to Do With

There's something hypnotic about seeing so many of one mana symbol all together like that. Anybody else remember Rushwood Elemental?

I always loved Rushwood Elemental, I think as much for that ridiculous mana cost as for what it actually did.

So what does a cost like that mean? It means, first and most obviously, that if you're going to play Primalcrux—as opposed to sneaking it into play with Zombify (yawn) or Incandescent Soulstoke (hmmm) or Dramatic Entrance (teehee!)—you're going to need some serious commitment to green mana.

Second, of course, in this particular case, it means that once you've made that commitment, you're getting, bare minimum, a 6/6 trampler for six. But that's just the tip of the cruxberg. You can do some awesome things with a Primalcrux.

1. Play It on Turn Three

is a lot, but there's no color better at building up its mana than green. Picture it:

Turn one: Forest, Llanowar Elves. Or Heritage Druid, or maybe Magus of the Vineyard (or Fyndhorn Elves, if you're a Old Fogey like I am).

Turn three: Forest, then BAM! Primalcrux! And if you've been accelerating your mana with permanents, it's at least, what, 8/8? 9/9?

Turn four: Play more permanents (why not?) and swing!

Maybe you don't want to rush your Primalcrux; maybe you just want it to be as big as possible when it does hit. The best way to do that, of course, is to play lots of permanents with lots of green mana symbols in their costs... and that's where the hybrid cards in Shadowmoor and Eventide can come to the rescue.

See, you're in good shape to play something that costs

on turn one and something that costs

on turn two, but once you're looking at

, the options get thin in a hurry. Unyaro Bees, maybe? Chlorophant's cool if you're playing with older cards, and there's, um... Niall Silvain, I guess (oof!).

This is where Shadowmoor and Eventide come in. Hybrid symbols count! Boggart Ram-Gang's

. Wilt-Leaf Liege may not boast four green mana symbols, but it costs four and gives Primalcrux +4/+4, and that's good enough for me. And the four green demigods—Deus of Calamity, Oversoul of Dusk, Overbeing of Myth, and Deity of Scars—can all do a mean Rushwood Elemental impression when it comes time to count up the mana symbols.

So if I use up my mana each turn playing, say, Treefolk Harbinger (getting a Forest, of course), Elvish Warrior, Wilt-Leaf Cavaliers, Wilt-Leaf Liege, Overbeing of Myth, and finally Primalcrux on turn six, and nothing dies, my Primalcrux hits the table at a very lucky 21/21.

Sure, sure, those are huge ifs, and I'm totally setting myself up for a very nasty Wrath of God. Guess what? Don't care! If it works, it'll be hilarious; if not, there's always next time.

Once you've got the biggest creature on the board, there's plenty of fun to be had (beyond the obvious face-smashing, I mean). Arena gives ol' Cruxy permission to step on one creature of your opponent's choice every turn, Greater Good can let you draw an absurd amount of cards if you're into that sort of thing, and Cream of the Crop lets you choose from a very large harvest and stack everything you put on the bottom the way you want it. And if you can sneak some red mana in there somewhere, I hear Pandemonium is pretty good....

It can be positively heartbreaking when you slam down your biggest creature and some smarmy control player taps a couple of lands and says "Remove Soul" (before it resolves) or "Terror" (after it resolves) or any one of a number of other irritating things. Like any investment, the

you've sunk into this fine fatty is worth protecting.

Vexing Shusher or Leyline of Lifeforce can help you stick Primalcrux in the face of counter-happy foes. Once you've got it in play, Shield of the Oversoul makes Primalcrux indestructible and grants a cool +2/+2 on the side (+1/+1 because Primalcrux is green, and another +1/+1 for the green mana symbol in the Shield's cost). Timber Protector + Runed Stalactite on the Primalcrux does the same. Lightning Greaves grants shroud and haste, both great on a good solid fatty. If you're willing to pay a little blue mana, Protective Bubble is always a hilarious way to ruin someone's day, especially someone who makes fun of you for playing Protective Bubble.

What's better than one Primalcrux counting itself? Two Primalcruxes counting each other, of course! You can just play two of them the old-fashioned way, of course—nothing wrong with that—but there's plenty of fun to be had if we venture even a short distance into Johnny country.

The simplest tricks here are ways to search Primalcrux #2 out of your library. Primalcrux, meet Primal Command. I think you'll get along famously! Summoner's Pact does a fine job, too. Wild Pair is even better, because the ability that tells your just-played Primalcrux how big it is also tells the one in your library that it's the exact same size. And that's not even getting into crazy older cards like Pattern of Rebirth, Tooth and Nail, and Defense of the Heart....

But let's say you only have one Primalcrux in your collection. No problem! There are plenty of ways to get copies of it into play. You could play copy cards from other colors, like Clone or Heat Shimmer or Shapesharer. You could imprint it onto Soul Foundry, which also gets around the color-intensiveness of the mana cost. You could dig way back and play Dual Nature, which doubles up every creature you play.

There's an even better option, though. The mana is a little rough, so this trick might be best applied in a Two-Headed Giant game.

I haven't pulled it off yet, but I can imagine it: I've played a Primalcrux and made a bunch of Elf tokens, and my teammate Laura has used Spectral Procession and Cloudgoat Ranger to make an impressive army as well. We attack with our whole team, and after our opponents have made their blocks, Laura taps four lands and plays our trump:

Her Primalcruxes and mine count separately, of course, but as long as we each have plenty of creatures, ours will be bigger than the opposition. And if they're bigger, they're a lot bigger, as every extra Primalcrux gives all the other Primalcruxes a cool +6/+6.

I have, let's say, eight tokens attacking alongside my Primalcrux, and she's got seven creatures total. Once she turns them all into Primalcruxes.... Hold on, let me grab a calculator.

How does... 780 points of trample damage sound?

Finally, of course, I should point out that the wonderful thing about a card like Primalcrux is that you really don't need to do anything fancy to have fun with it. Just calmly tapping six lands and slamming down 6 or 9 or 12 power attached to a jaw-dropping, almost unreadable mana cost is going to turn some heads.

Stomp on in there. Turn this thing sideways. Make people sit up and take notice.

That's what being big is all about!

The Eventide street release and Launch Parties kick off on July 25, but you don't have to wait. Get your first chance to play with Eventide cards at the Prerelease on July 12 and 13!