Dance of the Decks

re you thirsty for more gaming? I'm not talking bloodthirst—our theme of choice elsewhere this week—but a gnawing hunger to gather some allies and get your Magic on. You can certainly find your local Wizards Play Network location, jump into Friday Night Magic, or plot a course to the next Grand Prix. There are many, many ways to play Magic without putting in the effort to find brand new players: just head where those in the know already know to go.

But for your average Tuesday night or Thursday lunch, heading to a store or event may not be an option. In fact, you often won't find gatherings every time it's convenient for you. Playing more Magic requires something beyond just showing up where the cards are: sharing the game with new players makes all the difference.

Two weeks ago I broke down some of the principles of sharing with new players. Having something to actually share is where we ended. Since you voted to see them, today I'll show you four more "Shared Magic" decks then dive into some game play.

I came to game, and I'm planning on recruiting.

One small caveat before I start listing cards: these are suggestions for you to consider. There are few hard and fast rules when it comes to sharing Magic, and how you should share the game really depends on who you're sharing with. Let's check the results of last week's poll:

Most of you at least consider Sealed Deck as an option for sharing Magic, but the results are clearly very mixed. I believe that the binary good-bad choices are wrong, and that how you share Magic should always depend upon the individual you're sharing with.

As several of you pointed out on the forums, the process of building a deck can be intimidating, particularly for Draft. Sealed seemed to be the consensus on where to start, but only when a player is ready to build for themselves. When is a player ready? That's strictly a judgment call, and nothing less than exposing someone to the trials, errors, and successes of deck construction can answer that.

This is why I'm showing you the decks I'm using to share Magic. Most players need to see a deck in action, and feel how it works first-hand, before jumping to sifting piles of cards themselves. New players coming with Magic familiarity from Duels of the Planeswalkers 2012 may be much more comfortable building their own deck, as will those who are relearning Magic all over again after being away. Again, it's always up to the individual player.

With that out of the way, let's get started! 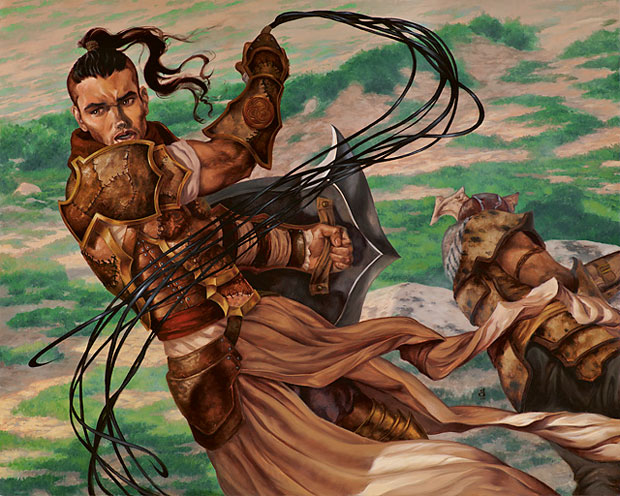 
The white deck does what white does best: get in across the battlefield with an array of helpful creatures. While most of these creatures seem obvious (so attack, yes?) it's the little additions that help show there's more to white than just bashing.

Stonehorn Dignitary has quickly come to the second spot on my "Magic 2012 Favorites" list, as putting an opponent off of a combat step can be just the reprieve that's needed to recover. Auramancer serves the same duty by not-to-subtly suggesting we use some Auras as well as letting us gain life repeatedly from Divine Favor.

The concept of "protection from" is often challenging, but the limited doses here let us being showing it off early while giving room for players to discover its full implications. And what's a weenie deck without Equipment like Greatsword? Really! 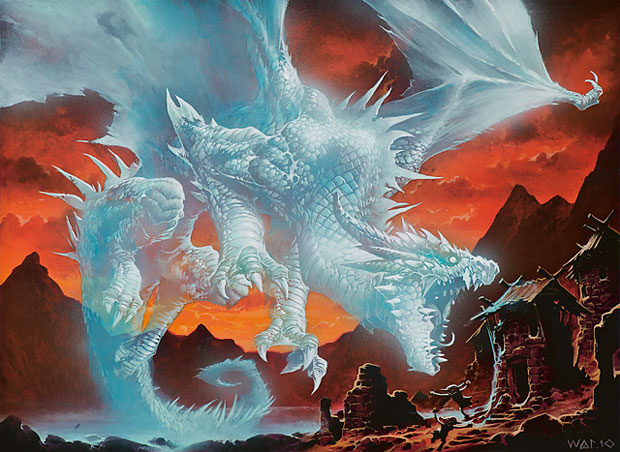 
Thanks to the fine folks who crafted Magic 2012 for Limited, blue once again has access to a variety of cheaper, aggressive creatures. By combining the ability to attack (or block) earlier with a standard suite of countermagic, blue gets to flex its muscles as a controlling deck with teeth. And there's Skywinder Drake too, obviously.

Getting to attack an opponent's actions while swinging over in the air for damage is a surprisingly effective plan, but drawing cards or simply making wishes come true can be very thrilling things too. Sky-Eel School plays the part of a one-shot Merfolk Looter, letting players drop dead weight on entry and get a much bigger body as well.

While the total creature count is lower than you may want, and many of the creatures within more fragile than normally desirable, it's just how blue works. Once players start to see how to apply Frost Breath and Mana Leak, those who enjoy those pointed plays will stay hooked on that feeling. 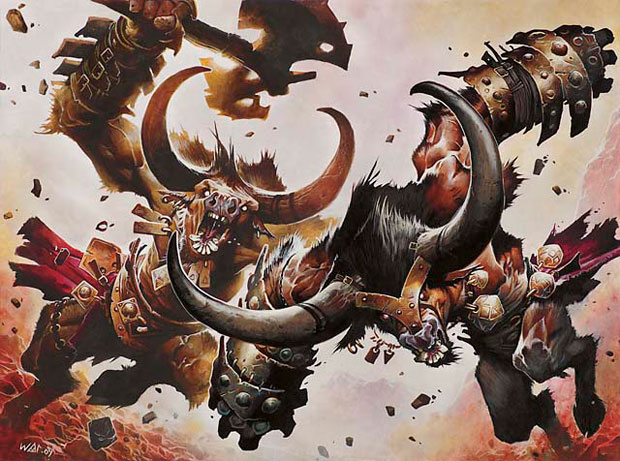 Kill It With Fire


Like blue, red was a challenging deck to pull together. While red has access to a bevy of burn, that isn't all red is good at! Here, we mixed together the requisite burn with a healthy dose of tricks (like Goblin Grenade, Act of Treason, and Fling) and a Goblin tribal theme.

Creatures like Blood Ogre and Gorehorn Minotaurs aren't terrible when played without bloodthirst, but become obviously more terrifying when they are. The full suite of Goblin Arsonist really helps these bigger, badder versions come out to play more often. You can even Fling an Arsonist to take out two creatures with 1 toughness, a clever trick some players will be very excited to discover. 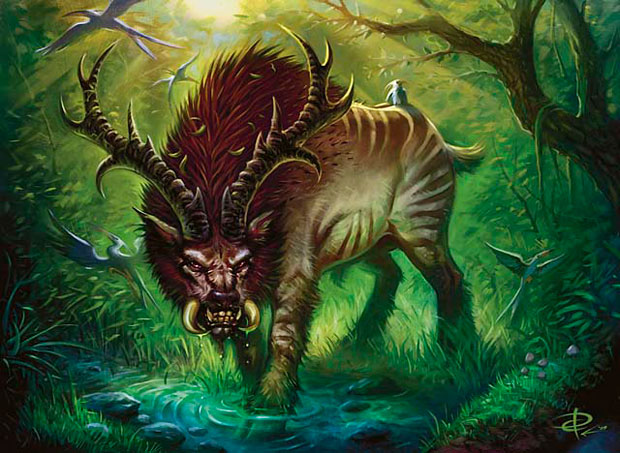 
Green is focused on creatures, so naturally our deck tilts towards bodies. The usual suspects of green appear here: Garruk's Companion, Stampeding Rhino, Greater Basilisk, Llanowar Elves, and Giant Spider. These are all very similar (or the exact same in the case of Giant Spider and Llanowar Elves) to creatures I played when I first started with Magic, and the ease at which "Big guys attack!" comes to players makes them all-stars in my book.

Magic 2012, however, is where the magic happens. Arachnus Web is, finally, a way for green to shut down annoying little guys, like Gideon's Lawkeeper and Goblin Fireslinger. It also lets green avoid a big guy for one attack step, which may be all the time it needs. In a not-so-subtle salute to our new green Web, Arachnus Spinner is the hero of the day. It can block all sorts of things as it webs a board up completely.

Or, in other words, watch out for Spiders!

Having these decks doesn't mean much if I don't actually have anyone to share Magic with. Fortunately, I ran into a very new player at the local game store who was both eager to play and at the right experience level to enjoy these decks. 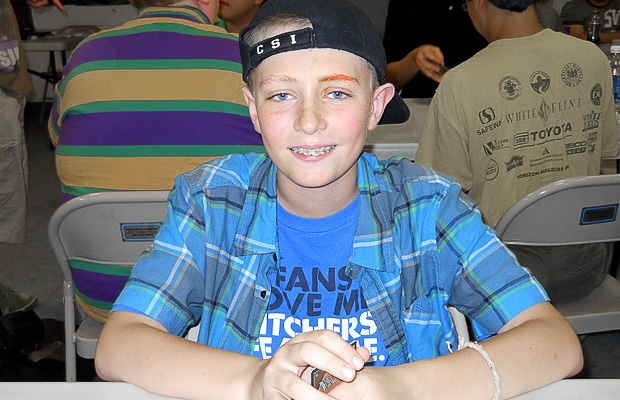 James had recently started played Magic, and a glance at the decks he brought showed that what I had was spot on for him. He had a black deck ready to go, and I jumped on my white deck. Our first game was fairly exciting. While he plinked away at me with a Blood Seeker, I tried to assemble my own personal hero through Benalish Veteran and Spirit Mantle. 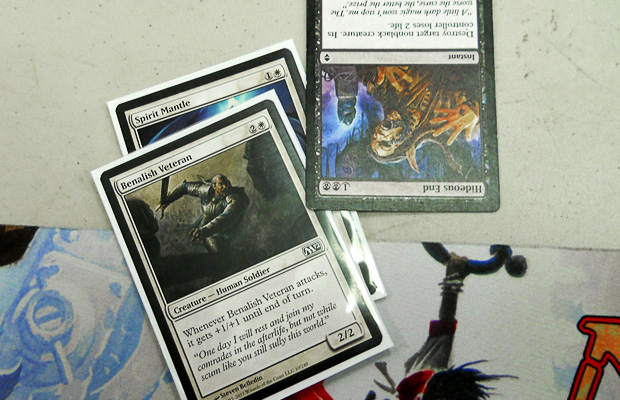 Plop! He splashed right into a Hideous End as James brought Child of Night online to join in the fun. I had drawn lots of spicy spells but didn't have another creature until Auramancer showed up a turn later. With the Spirit Mantle back in hand I decided to suit up the Auramancer as another hero. 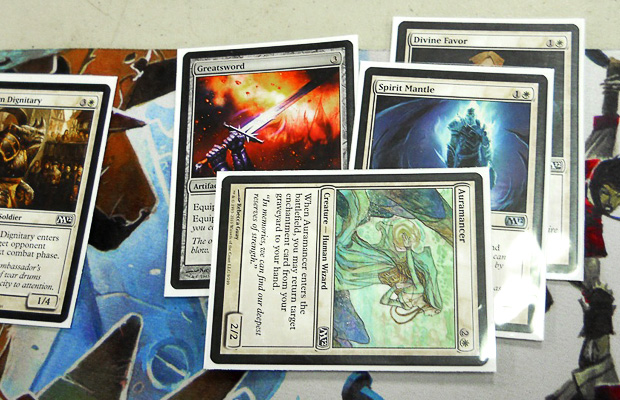 James admitted to having Doom Blade and other spells like it in his deck, but didn't see any as I proceeded to build my own 7/7 with protection from creatures. Ouch.

It's important to note that we discussed "protection from creatures" a little bit. While James understood that it prevented damage from happening (his Giant Scorpion couldn't kill my creature as the damage never happened), but it was a little trickier to explain why his creatures couldn't block mine in combat. "If you can block with it when I attack, why can't I block it when you attack? I know it still won't deal damage, but why can't I block anyway?"

They were fair question that I didn't have the best answer for at the time. I'd definitely be interested in hearing your thoughts on how to explain the ins and outs of protection!

Moving to Game 2, James switched things up for his green deck. We had a different start. He led off with Llanowar Elves for an early Blightwidow (Yikes!). I had a Stormfront Pegasus and Pacifism for his Spider. 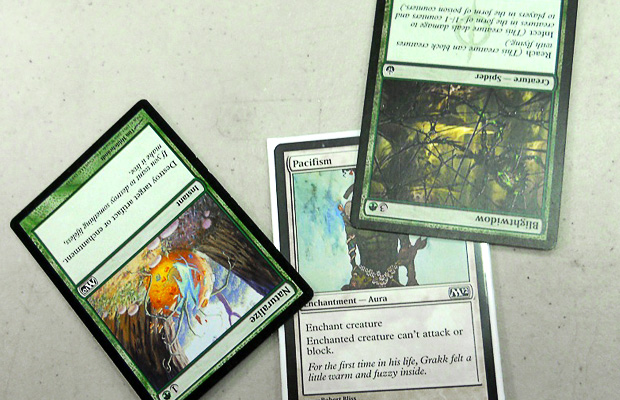 James was right there again, using Naturalize to free up his poisonous arachnid. I could only muster a Benalish Veteran as time was called: James, unfortunately, had to leave. I called it a draw and promised that the store full of friendly faces would be here every Thursday. He seemed to like that.

While I played many games before James had a chance to join, there is one that I played worth considering. Matt, a regular around the shop, agreed to battle with my decks. He happened to choose green against my blue. What followed was a quick lesson in humility.

My original pass at the blue deck was without Mana Leak, instead having some Cancel and Unsummon in its place. With a fist full of Frost Breath, Ice Cage, Unsummon, and an Æther Adept, how could things go wrong?

Everything I could do required targeting, none of which can affect our holy dog. That was a swift beating. Our follow-up game didn't have a Wolf immediately, but did have a multiple-Llanowar Elves lead-up to an Overrun (after Sacred Wolf showed up, of course). Sometimes you just don't get it right the first time. Thanks to Matt's help, I reconsidered my Mana Leak position and we switched things up. Having that early, fast counterspell was exactly what the deck needed. While it's still light on creatures, it can put the brakes on any other deck. Thanks again, Matt!

It's this idea of "testing decks" that leads up to this week's poll:

I'm curious how you handle new decks. Do you have a routine you run it through? Are you excited to just see what will happen as soon as possible? Please share how you handle your latest libraries in the forums or through email!

Next week will be a little special, and I'll give you three hints as to how:

1. It's the follow up to a previous article.
2. The previous article is this one.
3. You should recalibrate by choosing any legendary creature, not just those mentioned.

Alright, so those hints weren't very oblique. But I hope it's enough to see you next week! Ready your decks and we'll catch you then!