t's a purely nostalgic affection, but I love "old" cards. Old cards are cards from when I started playing: cards from Ice Age, Mirage, and Tempest era sets. I vividly recall Giant Mantis, snow-covered lands, and Rolling Thunder. I recall Kjeldoran Dead, Abyssal Gatekeeper, and Muscle Sliver. I could go on enumerating dozens of cards off the top of my head but it wouldn't serve my purpose here (or be extraordinarily interesting). There was one card I recall that did something awesome: it killed dudes when my dudes died. It didn't matter how big or small my creature was, this card made sure every other creature was just as frail and weak. It was, oddly enough, a very black card: Grave Pact.

You see, Grave Pact isn't like some of the other black cards I remembered seeing. It didn't want "half my life, rounded down" to use it. It didn't keep me from drawing cards except for the ones I paid life for. In fact it was just about the only awesome black card without a downside. Grave Pact make my creatures little bombs of death that spilled across the battlefield (or "what was in play" back in those days) and let me fearlessly send my dudes into harm's way. They were going to get the job done one way or another.

Of course, there is one thing about Grave Pact that I always felt was a drawback: it couldn't actually kill your opponent. Killing lots of creatures was generally a good thing, especially in the choatic multiplayer games I would join, but if I didn't have a creature myself it didn't really do much for me.

If you're an astute reader you can probably guess at part of what's . 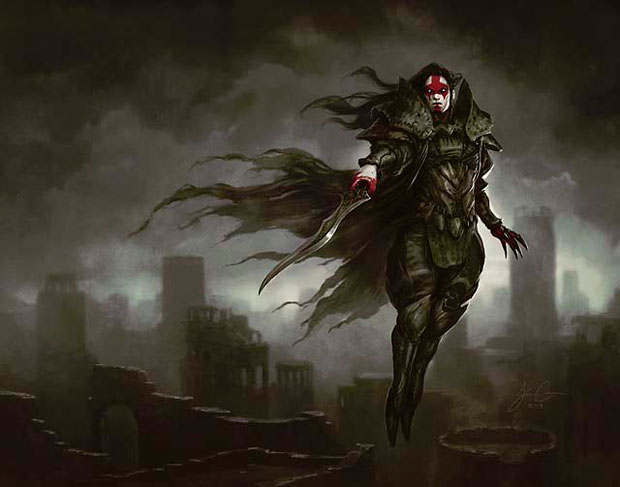 But this bad boy isn't just a riff off the "slap an enchantment into creature form" style of Magus of the Moon and friends: this here is pure, 100% Vampire, with all the rights, privileges, and powers thereof. It would be easy to see it as just a walking enchantment, but his sizable flying body can do what Grave Pact never could: cut your opponent down.

Things that have worked well with Grave Pact will remain good friends with the Butcher. Altar of Dementia and Fallen Angel were classic companions to provide quick and repeatable outlets to dump creatures to the bin. Verdant Force and Breeding Pit (the latter recently reprinted in Duel Decks: Divine vs. Demonic) also make fine companions to provide a steady stream of dud dudes to dump.

There's something to be said for doing it old school. Mongrel Pack replaces itself with four 1/1s if it blocks for you or, if you're sneaky, just get through declaring attackers (if any) and sacrifice the pack to some effect. Lab Rats provides a 1/1 Rat every turn if needed, and Sengir Autocrat comes with three friends upfront. Green ramp effects (Rampant Growth and Harrow were both around even back then) and Elves of Deep Shadow let Verdant Force and our namesake Butcher of Malakir come out to play sooner rather than later. And the classic Jinxed Idol brings new meaning to the misfortune of having lots of creatures sacrificed. Yeah.

While I like spending time in the past, it's the imminent future that brings us here today, and mirrored pairs appeal to my sense of style. While many of the cards of yesteryear seem to be long relegated to the past (When was the last time you opened Bayou in a booster pack?) there's surprising similarity in some of the cards available today.

The Very Model of a Modern Butcher

4 Birds of Paradise 1 Rhys the Redeemed

I think new school is very cool, too. With almost the same type of mana ramping driving things, both Ant Queen and Bitterblossom will provide a steady stream of little guys. Fellow Worldwake luminary Bestial Menace (from the Visual Spoiler) is three friends in one to join in the fun that Vampire Aristocrat and Nantuko Husk bring. Carnage Altar is a mirror-inverse of sorts of Altar of Dementia that draws you cards instead of milling your opponents. And Rhys the Redeemed gets stapled on just for the hilarious possibility of doubling tokens—you'll have more than a few. 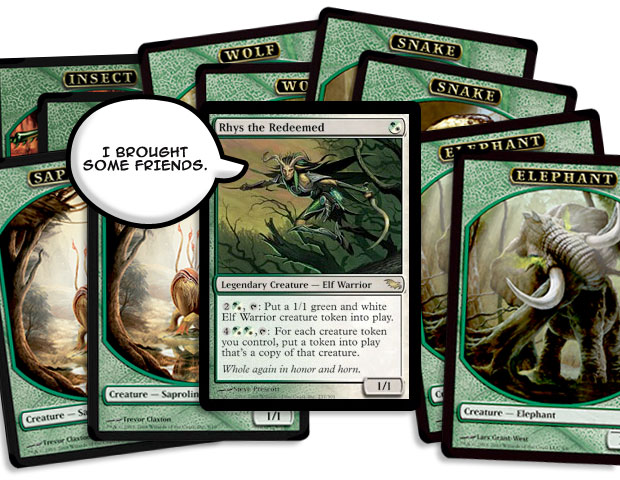 It wouldn't be fair, though, if I skipped over a whole section of cards that play nice with Butcher of Malakir: creature cards that sacrifice themselves for their effect. Mogg Fanatic is perhaps the most recognizable of this type of creature, but it's far from alone. Zendikar brought us the humble Reckless Scholar. Shards of Alara brought us Bloodpyre Elemental. From Alara Reborn comes the very cool Qasali Pridemage. There are many, many more too. How many can you find? 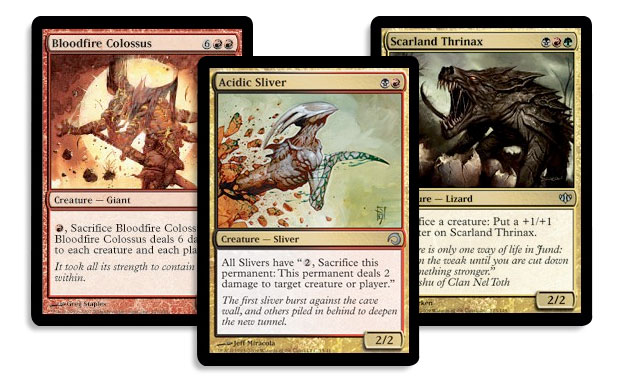 Looking more closely at the most recent sets in Magic there are several other things that benefit from the Butcher. Xathrid Demon, a mythic fellow from Magic 2010, requires a creature sacrifice every turn which becomes every players making a sacrifice. The Archdemon of Unx is another Demon requiring sacrifice—this time of a non-Zombie creature—but fortunately, it supplies us with another expendable creatures at the same time. Fleshbag Marauder has its "each player" sacrifice doubled for your opponents. Actually, all these black cards give me an idea.

Okay, so I lied (a little): Smallpox, Abyssal Gatekeeper, and Cabal Coffers aren't so recent. However, these cards are phenomenal tools in a mono-black control deck. Instead of splitting the focus between discard and board disruption, I go straight after the board. With the many small dudes, like the aforementioned Abyssal Gatekeeper, that will punish most creature-based strategies, you should be able to hold steady until one of your Demons shows up to get the party started. Cauldron Haze, Restless Apparition, and Murderous Redcap all provide ways to get double duty for your sacrifices. By the time our bad Butcher stops by, the party will already be out of control. Expedition Map serves as a way to fetch a crucial Cabal Cabal Coffers and makes a fine turn-one play if you happen to have it in your opening seven, with the lonely Crypt of Agadeem being useful later in the game when your graveyard should be well stocked. 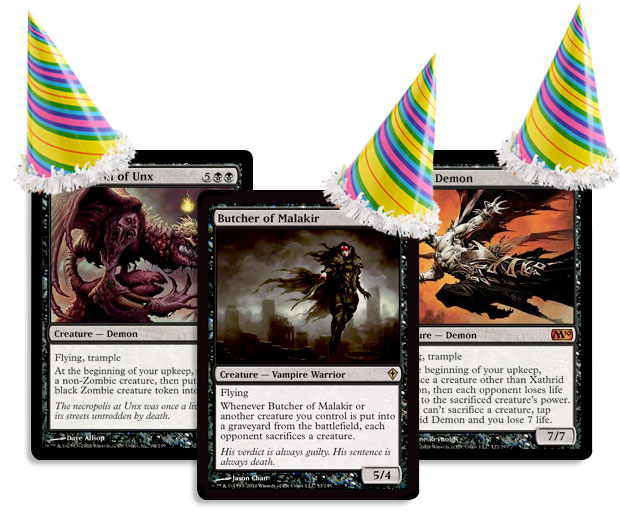 This is one party invitation you do not want to miss.

And speaking of parties you don't want to miss, Worldwake is turning out to be more exciting that I thought possible (and my bar for expectation was already set pretty high). If you're anything like me, which is likely considering you're reading about Magic like I do, then you're just as pumped for the Prerelease events this weekend. If you're not sure where one is happening near you, never fear: this handy location finder will show you where events are occuring close to you (including Friday Night Magic, Pro Tour Qualifiers, and other events if you're hungry for more).

Prerelease events can vary slightly from location to location, but whatever is on the table should be loaded with exciting new cards. Both Draft and Sealed events are fairly ubiquitous, but there may be alternative available. I like to try my hand at Open Dueling, which involves getting an intro pack for the new set and playing it against anyone else at the event; record the DCI number of five players you play against, then cash in the card for a reward.

At the start of the new year I talked about Group Game Draft, and if you have a chance to engage in that particular flavor of multiplayer-draft hybrid insanity, you may get to tap into even more packs of Worldwake and experience an epic boatload of chaos multiplayer shenanigans. 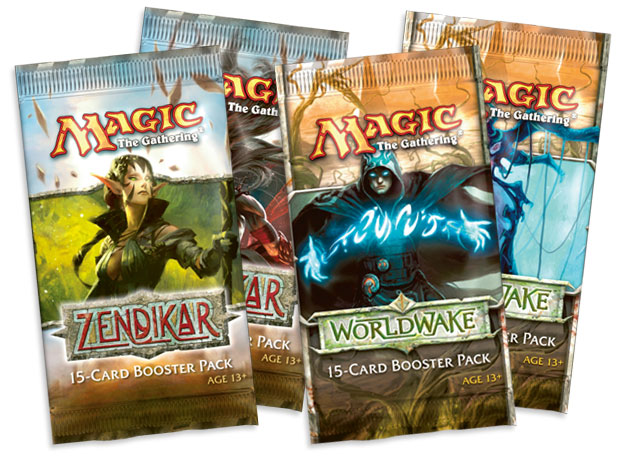 1. You get a cool foil for participating.

While the usual caveats "While supplies last" and "For those who qualify" apply here, generally speaking you'll walk away with something neat to commemorate the event by showing up to join in the fun: 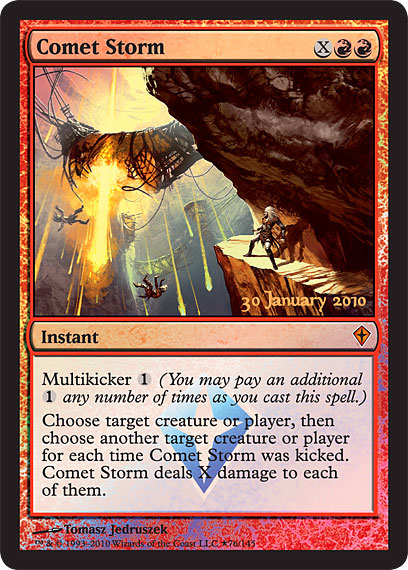 I'll let you figure out how awesome that card is on your own. (Hint: Fewer targets with more mana. Wink, wink.) The other great thing about the Prerelease is more subtle:

2, You can use the cards right away.

I don't mean in some sort of tournament or challenge, but in casual play among friends you can often use your new cards right away. EDH explicitly speaks to this in the rules with "Cards are legal as of their set's Prerelease," which is really just another way of saying, "Once you can get the card legit, don't wait—go start having fun!"

And that's exactly what I'm planning to do this weekend. My local shop in Rockville, MD is hosting big Prerelease events both Saturday and Sunday and, for those interested, I'll be packing two new EDH decks dedicated to two of the legendary creatures in Worldwake. 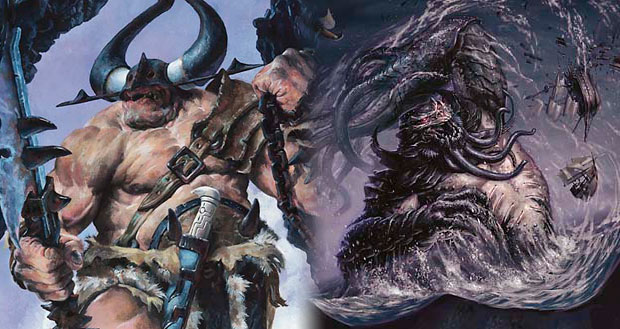 If you want to see and play against them, or just experience EDH, personally come find me. We'll be waiting.