The Death of Wrath

That's right; as a control player at heart, Josh has never met a board-clearer he didn't like. Pernicious Deed? Sign him up. Akroma's Vengeance? Loving it. Inferno? Oh, he's all over that. If it's a way of emptying the table of every creature, Josh will put it into his good decks.

Josh wants to destroy all of your guys, and then mop up afterwards. And when I told Josh about today's card, he had this to say:

"I guess I won't be playing here once Shadowmoor comes out."

That's right; this next card hates board-sweepers. It hates them so hard that it pushes Wrath of God right out of the game in some environments... which means that the control-happy guys like Josh are going to be weeping in their beer come the release of Shadowmoor. Global removal becomes significantly less powerful.

If you've been hating the way all of your guys just die whenever someone uncorks that painful Mutilate, Twilight Shepherd will clear that problem up like it's a mild case of poison ivy. And it'll make the control players feel the pain that you used to.

But what is this wonder card, you ask?

That's right. For only one more mana than the classic Serra Angel, you get an additional point of power and toughness. That's good. And like Serra Angel, it has vigilance, which means you can attack in the air and not have to worry about having no defense.

And when it comes into play, all of the cards put into your graveyard that turn are put back into your hand! Note that this isn't just "creatures," my friend; if someone happens to have offed all of your artifacts with a Shatterstorm, you get them back. If they've cacked your enchantments, you get them back. If they've oh-so cruelly killed your Liliana Vess or your Garruk Wildspeaker, they bop straight back to your hand!

(It won't get back discarded cards, since they have to be "from play," not "from your hand," but it's not like you have to worry about multiplayer discard all that often. Similarly, instants and sorceries, along with other spells you play that are countered, go directly from your hand to the stack to the graveyard and never touch play. It'd be nice to recycle them, but the Shepherd can't do everything. Besides, it's a Shepherd, not a Spell-herd.)

But alas! Twilight Shepherd does not have flash, so it means that you're highly unlikely to get the bonus from it. (Most global removal spells are sorceries, and people generally don't play sorcery-speed removal spells on their opponent's turns.) But that second ability is hanging around like a bad smell for control players, saying, "Come on. I dare you to Wrath of God me."

Persist is a new keyword introduced in Shadowmoor, and one that I suspect will be wildly popular in multiplayer circles. Here are the official rules:

What this means from your perspective is that creatures with persist need to be killed not once, but twice. I've long said that the key to a successful multiplayer deck is wringing the most benefit you can out of every card, and a creature with persist is almost like getting two creatures for one. (I mean, you can't have them both on the board at the same time, but it's still some serious double-duty.)

That persist trigger on Twilight Shepherd means that you fear no global destruction. They can kill everything you own, and you'll just get the Shepherd back into play and everything else back to your hand, ready to play on the next turn. Oh, you may have to discard a few extra cards in hand at the end of your turn if you wind up with more than seven, but is that really a problem?

Doubtlessly you'll lose some tempo. It'll take a couple of turns to re-play that huge army of yours. But chances will be good that you'll have a fully stocked hand of the best seven cards you can assemble, whereas your opponents will be desperately trying to rebuild their armies from scratch. You're way ahead of the game.

Or, even better yet, it means that your opponents will have to kill the Twilight Shepherd first with targeted removal spell, thus bringing it back into play with a -1/-1 counter so it won't return, and then lowering the boom with their global removal. Which is awful for them! Just awful! They've had to use up two cards in their hand to get the maximum effect, meaning that they're burning extra power to deal with your cards!

Unless you play with something like Momentary Blink. Or Otherwordly Journey. Or Liberate. Or some other effect that will reset the Shepherd in response to the targeted removal, and completely destroy your opponent's plans. And say, did I mention all of those cards are white, the Shepherd's color? 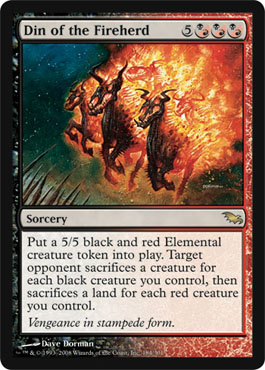 Armageddon effects like Boom also become a little less scary when you have the Twilight Shepherd around and a way to sacrifice it—the Shepherd goes to the graveyard, and woot! You have a mitt full of lands, ready to reload. And there are plenty of spells that allow you to sacrifice cards for useful other effects in Magic—use your imagination! (I prefer Diamond Valley-style effects like Worthy Cause, myself, but it's really up to you.)

This is a very important card for multiplayer. In fact, it's so important that I feel I should start preemptively telling you about the best ways to neuter it. Blue's bounce is probably your best bet (just wing the Shepherd back to his hand before the removal spell resolves—if it doesn't come into play that turn, all of his dudes stay in the graveyard), but "destroy one opponent" spells also help. The tempo loss of having to re-play all your best dudes isn't a terrible inconvenience when everyone's been reset to zero, but a spell like Din of the Fireherd or Plague Wind can be awful for the Twilight Shepherd player. After all, if they're still struggling to catch up while everyone else still has a full board of creatures, that can spell their doom. (But even in the worst-case scenario, they probably still have a 4/4 vigilant flyer, which is nothing to sneeze at!)

Twilight Shepherd is a way to make sure that the Wrath of God becomes more like the Temper Tantrum of God. And it will be the kryptonite for many control-happy players who've been counting a little too heavily on their Wrath of God effects to do their work for them.

About time, say I.