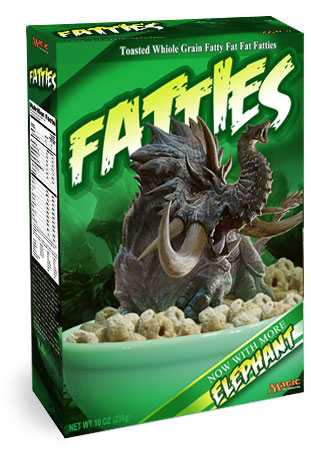 elcome to the post-Worldwake world! While the handy Gatherer was updated right before the Prerelease events it won't be until this weekend that you can buy fresh, crisp booster packs to fill your heart's desire for new cards. Of course boosters are just one way to get into the latest (and greatest?) set; single cards are one of the biggest drivers of deliciously new creations. You know how I love delicious, nutritious fatties so it's no surprise that there's a lot for me to love in Worldwake.

Your mileage may vary, of course, as every card has its fans but I'm fairly limited in space here. I've already covered Novablast Wurm and Butcher of Malakir and I don't presume to have come up with anything brilliantly new for either of those awesome cards, but there was one more fatty that made me utterly and completely thrilled to see: Terastodon. I'm an EDH fanatic and I'm just going to get my need to talk about it out of the way first.

Terastodon doesn't lend itself to many subtle or insidious acts unlike the other fatties I mentioned. It does its thing upfront and all at once. Consider a similarly priced and productive fatty Woodfall Primus. I like the Primus because he gets the job done twice: knocking out something obnoxious on the way in and when he bounces back from the dead. Even after a board sweep and remains at a more-than-respectable size despite the trip to the bin. However there are times I just need more of that sort of power and duty before my opponents have a chance to sort out and account for my anti-unnatural plans. Terastodon trades away the trample and "bounce back from the dead" abilities for straight-up green smashing power. I get to nail three unnatural aberrations with the same price point. Of course there has to be a catch—the controllers of the noncreature permanents you just destroyed get to put a 3/3 green Elephant token into play for each thing you destroyed.

What I really like about this is that there are two things that can happen. The first is that you destroy something much scarier than a 3/3 dork (like, say, Crucible of Worlds, Umezawa's Jitte, Sword of Fire and Ice, Mind's Eye, Vedalken Orrery, and many, many more). 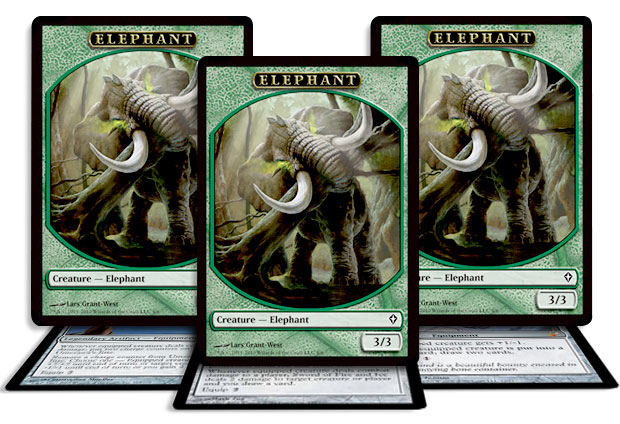 Here is where Terastodon gets a little tricky: the second thing that can happen is that you "cash out" some of your own noncreature permanents for Elephant tokens. Extra lands, superfluous enchantments, extraneous mana fixing—any of it—can be converted into little beats. If you wanted to get even more slick you can try to destroy your own indestructible permanents, like Darksteel Ingot or something slapped with Indestructibility, get the best of both worlds.

As you may guess I have a monogreen EDH deck and, of course, this guy fits right into it.

Terastodon isn't the only newly minted Worldwake alumni making the cut here. While it's much less impressive, Khalni Garden is both a nonbasic source of purely green mana (a great option to foil Naked Singularity and Sundering Titan effects) and an extra dude. What does extra dude do? Aside from block and attack (hopefully jacked up with multiple Overrun effects), extra dude can be used for Natural Order, help defend against Barter in Blood sacrifice effects, and come out as early as turn one. Of course, our 0/1 Plant token wouldn't do without the shiny new Plant-friendly mythic rare overlord of Avenger of Zendikar. Ramping into extra lands was never so good. 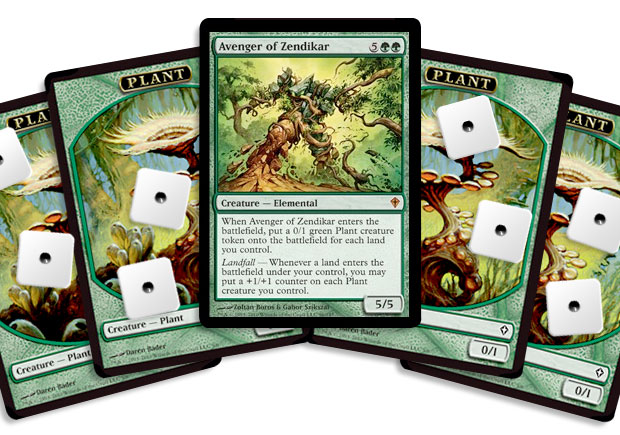 While I've mentioned nothing but powerful fatties (and a little land too) so far I would bet you couldn't guess what my favorite card is in Worldwake. Care to take a guess? Go ahead: look over all the cards and take your pick. Here's the :

I have a small soft spot for blue creatures that can 'get there' as a feature in more aggressive decks. While I have some vested interest in pursuing aggressive blue creatures (a story for another day), it's more my amazement at how far these little blue dudes have come. Spindrift Drake, an oldie-but-goodie from Stronghold, was the first "one blue for a two-power" evasive creature. Drifter il-Dal from Time Spiral pays homage directly to the idea of an evasive but mana-hungry one-mana blue dude. Now imagine this: play Kabira Crossroads (or Khalni Garden) on turn one, then on turn two play an Island to cast Wind Zendikon on your first-turn land ... and swing for two. Alright, I hear your yawns from here but not every dude has to be a fatty to be exciting—at least for me.

Whether you gain two life, put a Plant token creature onto the battlefield, or net some other enters the battlefield land-based trigger, the lowly Wind Zendikon give you an evasive dude early that also provides you a second chance to play the land later. Like the little guys of the past, you need to "spend" a blue mana every turn to swing with it but you can put that mana to better use elsewhere if an opportunity were to present itself, like Celestial Colonnade (There's a respectable fatty!).

A Land in Hand

It's a little rough (and by that I mean it needs some polish and playing) but I like where it's going. Oracle of Mul Daya and Explore turn the extra and various lands you're going to see into additional plays. Wind Zendikon and Celestial Colonnade are both flying strikers and the fabulously previewed Amulet of Vigor turns everything on much faster. Day of Judgment can help reset things if it gets too heavy too quick and with all the life gain you should have enough time to get started. Of course, Terra Eternal makes blocking and attacking that much of an easier proposition for your animated lands. The not-so-little secret to this deck is Treasure Hunt—hopefully the several lands you pick up are the treasures you want!

Of course, spell-lands and man-lands weren't the only Zendikar themes to get the follow-up. In what feels like ages ago my very first article was during Ally week and I talked about Allies, obviously. Worldwake brings a whole new crew of fellow adventuring champions to the party. Here's an updated version of my Superhero Ally deck:

Like the much acclaimed (and derided) continuity reboots in comic books, The NEW Superheroes is a distinct twist on the original. Narrowing down to two colors eliminates the need for superfluous green ramp effects which, in turn, lends itself to removing green entirely. Kabira Evangel and Kazandu Blademaster still front-line the team, but Hada Freeblade and Talus Paladin pack a lot of early and late punch. The former villain Umara Raptor and Sea Gate Loremaster make a fine turnabout to add flying and card drawing alongside the newcomer Jwari Shapeshifter, who jumps out to mimic a teammate already on the battlefield. Join the Ranks provides much-needed sidekicks that the whole team can rally around, but perhaps the greatest new trick here is Marshal's Anthem which can both pump the entire team as well as provide the plot device to perform the most common of comic book miracles: bring a hero (or several!) back to life.

Naturally if there is a new team of heroes running around there must be villains to face. New, different, and improved villains.

Here, too, is a comic book twist: good guys who turned bad. Oran-Rief Survivalist and Turntimber Ranger are a fearsome pair who are now matched up to the potent offense of Bojuka Brigand and Nimana Sell-Sword. The lackeys in the mix (Chameleon Colossus and Changeling Titan) help provide unique tools to overcome the heroes. The land-ramping power has migrated to the mana-hungry dark side (When isn't evil power-hungry?) and helps reinforce both Maelstrom Pulse to knock out anything the good guys throw down as well as lay the Nemesis Trap to ensnare the very best. The trap does double duty by both taking care of a hero and putting a copy, which will be an Ally as well, into play for the villains. 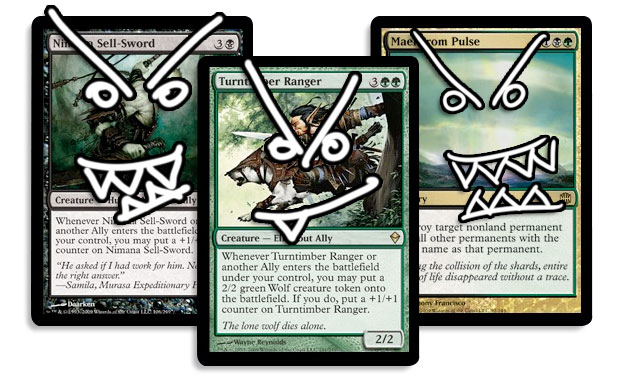 Deliciously villainous if I do say so.

Worldwake is far more than just more Allies and funky land-creatures: Multikicker and other tantalizingly awesome cards are waiting for a chance to join your existing decks.

Apex Hawks, Enclave Elite, Quag Vampires, Skitter of Lizards, and Gnarlid Pack, please meet Doubling Season; I'm sure you'll get well acquainted. While it's easy to pair "things that make counters or tokens" with Doubling Season I bring it up here because it turns many of the multikicker effects (kicker without limits) into double multikicker (something right out of George Orwell's 1984). All of these guys scale nicely to use whenever you need them but doubling their scaling makes them far more than doubly useful. Bonus points for throwing Strength of the Tajuru, Wolfbriar Elemental, and Everflowing Chalice into the mix. 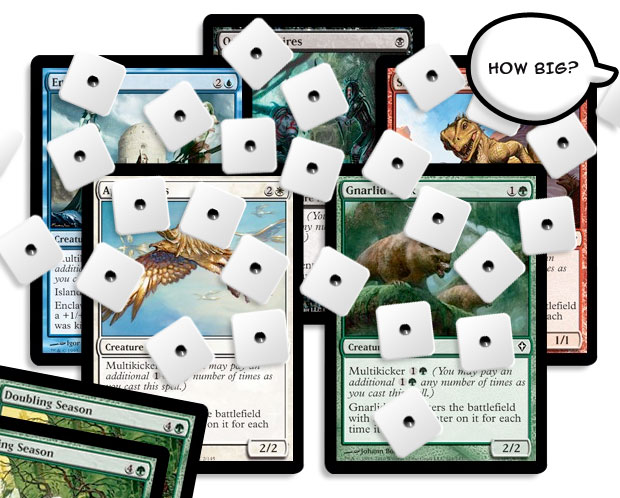 Another card I like is Death's Shadow since it seems to be a fair bargain: the closer to dying you are, the stronger your dark companion gets. Of course, there are ways other than almost dying to manipulate things in your favor. Lich will straight up make your life total zero but perhaps a slightly safer route to victory would be with Platinum Angel and just letting your opponent beat you down first. Abyssal Persecutor can then join in which should help you quickly bring your opponent's life total down to match. Add in a splash of Bone Splinters or some other sacrifice source and you have an easy way to get rid of the demon. It's never been safer to mess around with very fabric of winning and losing!

In another match made in heaven, let's pair Kazuul, Tyrant of the Cliffs with Fumiko the Lowblood (which sounds suspiciously like an EDH deck in the making). If you ever wanted lots of creatures attacking, hopefully you, these two will do it well for you! Tack on something simple like Eternal Warrior to Fumiko the Lowblood and she becomes a major roadblock and offensive linebacker.

There are dozens more ideas I could throw out there but what have you seen? What are the cards that make Worldwake jump out for you?

Join me next week when I get to show you what I saw at the Prerelease I attended—it was a sight to behold!