as it fun? What it everything you have ever hoped for? When did it hit you that the moment was over, and there was little left to claim?

No, I'm not talking about the New Phyrexia Prerelease Events and Launch Parties—I know those were an absolute hoot based on the two entire weekends of fun I saw—but simply opening a booster pack. Pop! Snap! Tear! Your fresh, new cards are already in hand. Done. Fin.

And there are so many ways to do the job. 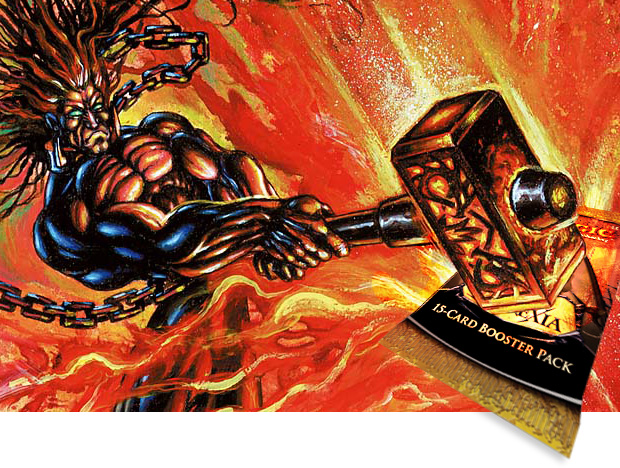 With New Phyrexia having just released it's going to be a flurry of pack-busting for the latest and greatest, at least for a few more weeks. Everyone who's in will see their share of the newest face on the Magic block, and I plan to do my part to fill trash bin with foil wrappers.

But if you plan to just open packs, one at a time, I hate to break this to you, but: you're doing it wrong.

That transitory flicker of fleeting fun is certainly appealing, but there's so much more to be done with a friend or three (or more) and some packs in the slow roll. Magic is a game, after all, and there are games to be played with packs.

I have a humbling admission to make: I like just opening packs. Really. I'm not sure if it's the combination of anticipation crossed with the reassuring and methodical sorting I'll need to do thereafter, but busting a booster pack is probably right next to Chinese delivery on my list of "Things I want to have infinite of." 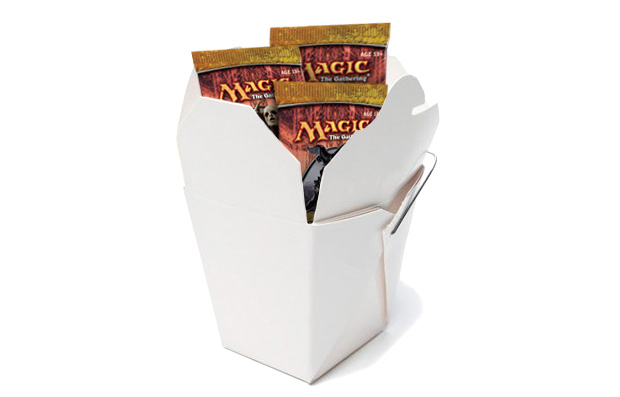 But since I can't really acquire infinite of either I've settled for a more mundane approach: keeping a stock (of booster packs, not prepared food). It was a tricky hurdle for me to overcome, sitting on sealed product until the right time came along. And it's that "right time" that I'm talking about today.

Whether it's you and just one friend, or a fleet of Magic friendlies, looking to get some gaming action it doesn't matter; there is a lot that can be done with just booster packs (and a few basic lands).

This is the definitive guide to busting booster packs. Get ready.

If you've never tried Pack Wars, sometimes also referred to as Mini-Master or similar, then you're missing out on the easiest way to open booster packs with a friend. 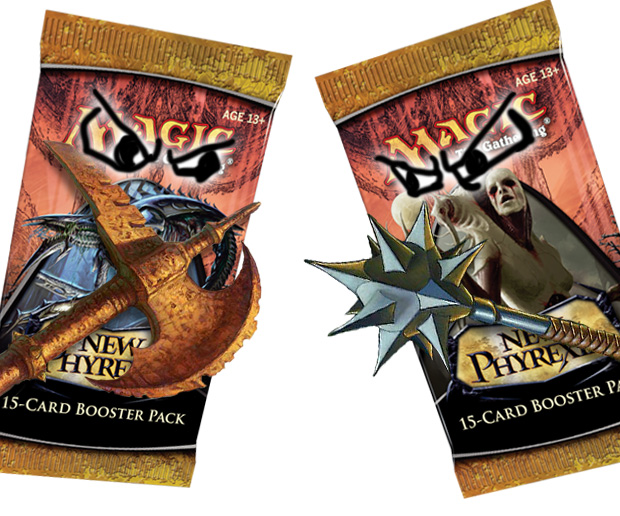 Players Needed: At least two (you and a friend) but scales easily.

Packs Needed: One per player.

Why It's Fun: Pack Wars is fast a furious Limited with a big splash a randomness! Whether you and a friend just have a single prize pack each or decided to go all-in on a box of boosters, opening packs and playing a quick game of Magic is a lot more entertaining than just a bust-and-move-on. With just a little practice games take just five minutes or so!

What to Watch Out For: Packs are truly random, and sometimes the cards that aren't helpful seem to be all you see. Pack Wars isn't a decisive way to test your mental meddle, just a quick shuffle of cards for fun.

Type 5 is something that was shown to me fairly recently, and that I shared with you at the end of an article a few weeks back. It's different from Pack Wars but just as fast and furious. 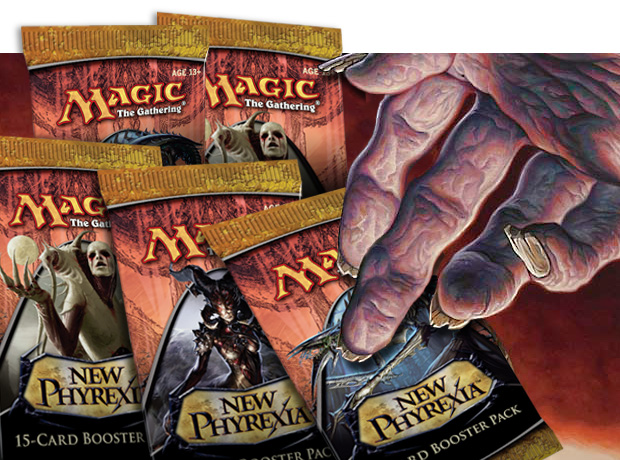 Packs Needed: At least two per player, though more is certainly an option.

Why It's Fun: Pack Wars is a self-contained booster playing unit. Type 5 is a method of playing that lends itself to using boosters. The explosive starts available, along with the ability to rebuy games by just setting aside all the seen cards and starting again with the existing libraries, makes Type 5 feel very different from other Limited formats.

And for those of you who like to apply some rigor to your gaming decisions, the choices around which cards to use as lands or spells makes this a wonderful format to mix players of all types. Getting to cast your most powerful spells early also ratchets up the fun level.

What to Watch Out For: Just as in Pack Wars, booster randomness can make for some awkward games. Mixing very different sets together to play with can also be difficult due to mana concerns; Scars of Mirrodin and Zendikar are polar opposites when it comes your average colored mana cost.

There are a lot of variations on drafting. Each one has different requirements, advantages, and disadvantages.

Each of the answers have been simplified somewhat, and additional details can be found in their respective descriptions. I'll recap some of the overarching themes.

Why It's Fun: Drafting is the classical mix of opening packs, making decisions on the fly, and mixing the joy of pulling something awesome with the reward of crafting a smooth-functioning deck. The flavors above are unique in terms of their advantages:

Far better than any individual feature, though, is the deeper diversity of drafting formats available. While those listed above are the most common that I run into there are many, many more. Team variants, layering on variants like Two-Headed Giant, and other specialized rules and processes for draft are available. You can even sculpt your own!

What to Watch Out For: Different draft methods lend themselves to different players in different ways. What I mean by that incredibly broad, vague statement is that there are varying degrees of rigor and strategy that can be applied to drafting—each one interesting interesting in its own right—that may turn some players off.

Bridging the gaps between experienced and new players, whether it's in a specific format or Magic more generally, can get very tricky as more and more decisions and rules are added. Not every format is something pleasant or enjoyable for every player; choose wisely.

Sealed is the format of choice for Prerelease Events and Launch Parties for at least one reason: you're opening the latest set, specifically to use it. Like Pack Wars, you don't have many choices about the cards you get, but like Draft, you have a lot of say in which cards you'll use in your deck. 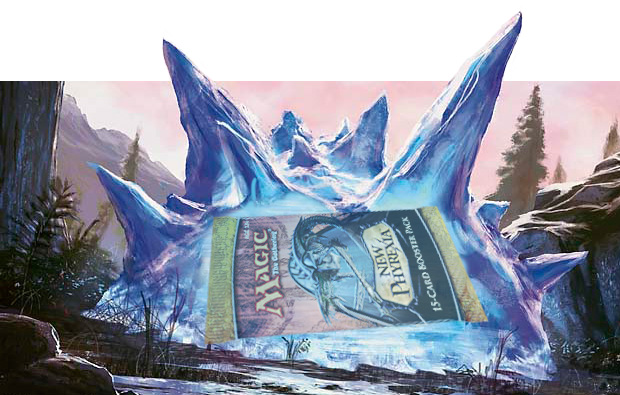 Players Needed: At least two, but scales easily up to handling multiplayer and Store League options.

Packs Needed: At least six per player, and I've heard good things about starting with more.

Why It's Fun: Sealed supports the greatest variety of Magic using just booster packs. If you want anything from duels to the massive Grand Melee, Sealed can support you. Thanks to the League option, Sealed can stretch over several weeks, allowing both consistent veterans and the freshest faces to jump into unhindered.

An often underappreciated aspect of Sealed is the fact that each group of players can choose their own packs to mash. Do you love New Phyrexia? Six packs, straight up. Prefer the original visit to Mirrodin? Take any six from Mirrodin, Darksteel, and Fifth Dawn. Zendikar / Worldwake / Rise of the Eldrazi is as fine to pick as Onslaught / Legions / Scourge. And for the truly player-go-lucky, just pick six different sets at random.

What to Watch Out For: Sealed takes the most packs per player for any Limited format. It's probably not something you'll be able to assemble from a few random packs you and friends may have lying around. And thanks to this overhead, rebooting a new pool (to create a whole new deck) can also be prohibitive. Not everyone is interested in opened six more packs to just be comfortable with what they're working with.

Whatever the way, and with whoever you choose, playing Magic with booster packs is an incredible way to open yourself up to the very heart of the game.

Tell me what you think:

However you feel, I'd like to hear back from you! There are many other ways to play out there and if grouping them together into a compendium breakdown is something you want to see, I'd be glad to deliver again!

Join us next week when we hit the buffet and pile it up. See you then!