if you started each game with a hundred life, and everyone else started at twenty?

No, that's not what today's preview card does—don't get greedy, folks! (Even though Morningtide is packed with some riotously powerful effects, that would be a little too broken.) But today's card deals with life gain, so before you continue I'd like you to think about how life affects your strategy. So take a moment to think about how your games would flow if you and you alone started with a hundred life.

It'd be pretty easy, wouldn't it?

You wouldn't have to worry about blocking for a long time. So what if someone hits you with their 5/5 flier? Heck, that's just 5% of your life. You'd have to endure eighteen more turns of that before you had to start worrying! With a big fat cushion of a hundred life, you could let guys through all day.

Since you wouldn't care if people hit you with their 2/2 guys, or even their 10/10 guys, you would have a lot of room to maneuver. You could go on the offensive without fear, sending your folks bravely into the breach.

Now let's flip that around: what if you started with three life? (And don't worry, that's not the preview card's effect, either.) That'd be a real hand-wringer of a game, because one solid hit would knock you straight out. You'd have to play cautiously, holding everything back on defense, because a single failed block or unexpected combat trick would leave you with no life at all.

The lesson is, of course, that like cards in hand, life gives you greater options. The more life you have, the more aggressive you can afford to be, and the greater chances you can take. Which is why life gain is good in multiplayer, a refrain I've been chanting here since Day One. You're under more pressure in multiplayer—in a duel, you'll be trading attack phases with your opponent, but in a free-for-all you'll have to weather three, four, or even eight Red Zone incursions before you get to untap again.

That life's a nice bulwark. If you can take the hit from a couple of opponents and still survive, you can afford to send your guys out to whittle them down. And the lower you can get them on life, the more conservatively they have to play, creating a wonderfully positive feedback loop... well, for you, anyway.

So life gain in multiplayer is good... but not just life gain. If that was the case, a card like Stream of Life would be the pinnacle of multiplayer tech. But the other tension in multiplayer is that while you have to endure multiple attack phases, the cards in your hand have to be stre-e-e-etched as thin as possible.

In a five-player game, your opponents will be collectively drawing four cards for every card that you draw. A card like Stream of Life does nothing but raise your life total; if a creature's attacking you, it won't kill the creature. It won't reduce your opponent's life total. It won't get rid of that enchantment that's hosing your entire strategy. In short, it won't affect the board at all, meaning that in most cases that Stream of Life will merely purchase you an extra turn, allowing you to die to the exact same thing that was going to kill you last turn.

(The sole exception? Congregate, which for four mana at instant speed has gained me upwards of 60 life on several occasions—now that's efficiency. You could also make a case for Beacon of Immortality, but I've seen people spend five mana to double their life total from 4 to 8 all too often.)

This is why the rule for multiplayer is, and has always been, "If you can squeeze in an effect with life gain on top of an effect that you'd already want to use, do it."

If you're going to burn someone and your mana base can support it, try throwing in a Lightning Helix and pick up 3 life when you burn away some minor irritation. If you're hoping to kill someone with a finisher spell, Corrupt will serve double-duty. If you're looking for a flier, toss in an Exalted Angel and get 4 life whenever combat arises, and if you want a ground-pounder then Loxodon Hierarch will help boost you. (And if you're in Slivers and you're not playing Essence Sliver, then you've never had the joy of crushing someone with an army of gigantic men after an Overrun and gaining 70 life in the process. The same goes, to a lesser extent, with Merfolk and Judge of Currents.) And why not hop on the Loxodon Warhammer train and gain a zillion life from every creature you can toss it on?

But today's preview card is interesting. It is—or can be—pure life gain to pull you out of a slump, gifting you with 10 points at will. Yet it can also be a victory condition, catapulting you out of last place and into the pole position. .

Now that's a real interesting twist. On the surface, it's pure life gain, but it's the way the card is worded that makes it multiplayer-worthy: If you can gain 10 life and then have more life than any opponent, you'll get a free Giant token thrown in. Unless everyone at your kitchen table is piloting Test of Endurance decks (or you've been unfortunately chosen for a group beating), you're almost certain to get both the life-jump and the token.

For a Giant spell, this is a strangely subtle card. Considering that six mana is also the going rate for sorceries like Austere Command, Tromp the Domains, Mind's Desire, and Burning of Xinye, a card like Feudkiller's Verdict doesn't smash your opponents across the bow... But it's not designed to. It's something that will haul your fat out of the fire after your opponents have done all the Tromping and Commanding and Burning.

You almost certainly don't want to cast this on turn six; ideally, you'll bank the Verdict in hand for turn sixteen. This card's meant for environments where Wrath of Gods and Damnations run rampant, clearing the board and exhausting everyone's hand. People have played as conservatively as they could, but you have to put down some men to smash face, and that third Hour of Reckoning was just one too many.

Everyone's on the ropes, clinging under 10 life and scrambling to find their win conditions. Then, in one turn, you gain a boatload of life and get a fresh attacker out of it. And that 10 life will give you the room to send that 5/5 Giant Warrior out on the assault and not worry overmuch about the retribution.

That's what Feudkiller's Verdict is for.

I could easily see this going in one of the classic white-red burn'em decks—something packed with Molten Disasters and Flamebreaks and tons of red blaze spells designed to take down everyone's life. Those work well, but the problem with decks like that is that you're often left at 5 life or less along with everyone else, and someone decides to come after you before you can play another Fault Line. With the Verdict, you can launch yourself out of harm's way while slapping down a token to shove someone in harm's way.

It'd also be good in a white-blue control deck as a one-of Mystical Tutor target—white-blue decks often take some early beatings the moment people see Islands. Feudkiller's Verdict will put you both in the game and on the board in one go. 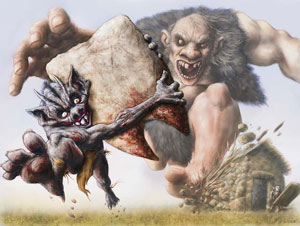 But more importantly, this is a Giant card, easily tutorable with Giant Harbinger and costing two mana less with Stinkdrinker Daredevil on the table.... and it fixes a hole in the Giants' defense. I've said before that the problem with Giants is that they take a while to get going—even with the power of Stinkdrinker Daredevil (which, yes, you should always play with), Giants need lots of land and mana to start their rumble. That land and mana takes time to assemble, which in the past has led to some Giant decks being laid low by quicker opponents. By the time they ramped to eight mana, they were at 6 life, and had to keep their boys back on timid defense. What kind of life is that for a Giant?

Now? If someone decides to play David to your Goliath and tries to swarm you under with an early wave before your largeness can get online, Feudkiller's Verdict can help you recover with a hearty "Ho, ho, ho!"

Feudkiller's Verdict is a fascinating twist on the usual life gain strategies, rewarding you for your newly lifted life with a man. You have to time it right, of course, or it could backfire... but that's what makes it oh-so-interesting.

Or should I say "Ho! So interesting!" Like a giant. You know.

All right, you might not laugh at my jokes. But you won't laugh at Feudkiller's Verdict, either. Try it out.