elcome to Innistrad. Today's weather is cloudy, with a chance of death. I mean, have you seen some of the locals? 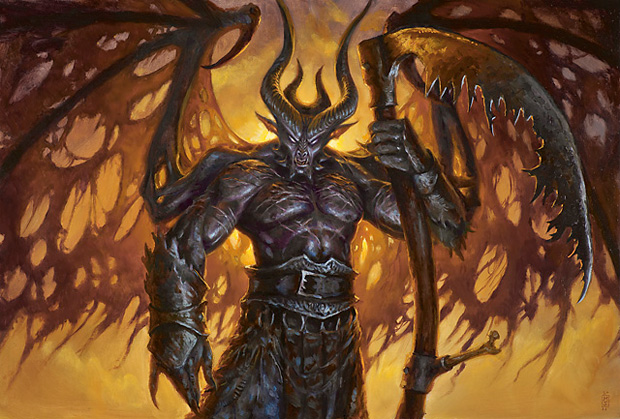 Yeah. That guy there is who we're meeting today. As Doug Beyer explained in last week's Savor the Flavor, the archangel Avacyn seems to be MIA, leaving Demons (and other agents of darkness) to step up into the spotlight. And this guy isn't going to be subtle about asking you to change allegiance.

He's big. He's bold. He's got a morbid fascination with mortality. Are you ready to ?

Demons cut creatures wide open, and this not-to-subtle throwback to The Abyss does a very good job at just that. So what does he do, exactly?

Morbid is an ability word that gives a name to a common event: a creature has died. It's not a trigger when the creature dies, it just lets you know that this is an ability that cares that a creature died already sometime during the turn. In this case, it cares enough to give us an "at the beginning of the end step" trigger: something else gets to die.

Demons love death, no bones about that.

A Cautionary Tale of Demons

Demons are almost always a double-edged sword. Many require sacrificing creatures, paying life every upkeep, and generally taking everything they can take from you. When faced with a Demon like this, just remember the three D's:

The keys to maximizing our demonic indulgence are right there. Look a little closer at this conditional trigger:

Making creatures die is a pretty straightforward affair. There are many things that get the job done.

Having one of our own creatures die anytime is pretty easy too.

And since handling Demons is dangerous for our own non-Demon creatures, we could use some that can withstand the pressure.

So what do we get when we put it all together? I think it would look something like this.

Deck from the Abyss

4 Reaper from the Abyss
33 Cards

This is what horror awaits those who tread with the Demons of Innistrad. It's actually a not a horror for you, though. As part of this contracted "Deal of Devotion" (see the similarly contractual "COVENANT"), our Reaper from the Abyss really doesn't hurt us.

Volrath's Stronghold, Reassembling Skeleton, Bloodghast, and Nether Traitor all offer ways around the situation where something non-Demon has to die but your opponent has no creatures. They also fuel our outlets for sacrificing creatures, like Phyrexian Altar, Kjeldoran Dead, and Viscera Seer. Attrition and Grave Pact are particularly rough for an opponent to keep creatures through, and adding Reaper from the Abyss to that duo is a brutal three-creature loss each time.

Nim Deathmantle and Lashwrithe provide some power boosts to our smaller fries, with the Deathmantle letting us buy back a creature on its way out and Lashwrithe giving us a sacrificial lamb through living weapon. Diabolic Intent is a tutor with a steep cost, but it fits our theme and function better than its Demonic Tutor cousin. A handful of fellow Demons (Woebringer Demon, Grinning Demon, and Ob Nixilis, the Fallen) round out the Swamp side of the deck.

Splashing blue here helps us cover our shortage of cards with "draw a card" on them. Neurok Commando dodges any errant triggers from our Reaper thanks to shroud while making the most of an empty board to attack into. Vivisection lets us cash one creature in for three cards, a pretty good deal with it was a Bloodghast or Nether Traitor that we sent packing.

And in case we had forgotten, Reaper from the Abyss is a 6/6 with flying, too. So far, this whole dealing with Demons deal is pretty swank. What collusion and soul-selling do you have planned for Reaper from the Abyss? I, for one, look forward to getting my hands on this YAACTICWTCIC (Yet Another Awesome Card That I Can't Wait To Cast In Commander)!

Demons Are in the Details

Last week I ran down some of the most fun cards in Magic. While the math that makes millions of Golems appear through Precursor Golem and a kicked Rite of Replication caused some of our heads to melt, I wanted to answer the other questions I had posed around Doubling Season—each one assuming you had that enchantment parked in play. 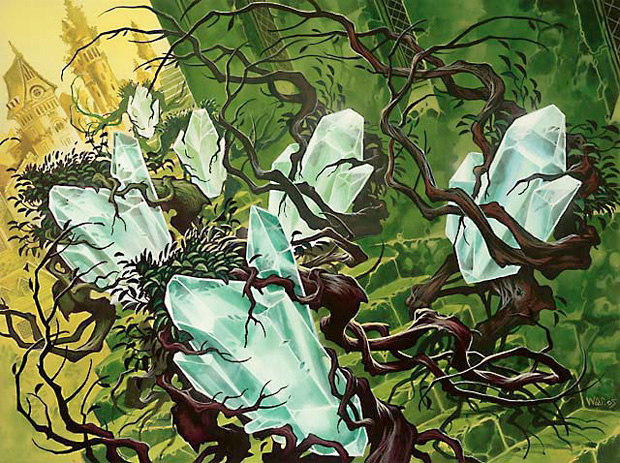 How can you spend three mana to get a 10/10 that eventually results in 10 more total power and toughness?

If you cast Cenn's Enlistment, then double your tokens through Rhys the Redeemed, how many tokens will you have after drawing land for five turns straight?

The answer to this can be solved via a cleverly created equation. Since not everyone is familiar with the math I'd need to describe it, I'll instead walk us through a "brute force" calculation, turn by turn.

That's part of why I took Doubling Season out of my Rhys the Redeemed Commander deck – I just didn't need to make that many tokens that fast! If I need to speed the process up, Rings of Brighthearth works fairly well too!

What's the minimum value X to push through a Primordial Hydra to have a 10/10 on your next turn?

The minimum X value is 2; you need to pay

You have a Mirror-Sigil Sergeant and you enchant it with Followed Footsteps. How many tokens will you have three turns later?

Similar to the Cenn's Enlistment question above, you can solve this through mathematical judo. We'll just brute-force it again for simplicity's sake.

The answer is fifty-two token copies of Mirror-Sigil Sergeant. I can think of a few things to do with fifty-two copies of a creature!

It's stories like those that make me smile, and not just because of the numbers game involved in figuring out what's going on. Thanks for the tales and trials; I look forward to more!

With all the hubbub about Innistrad in full swing, I'll let our weekly poll be a fun one.

Thanks to the awesome events at PAX this past weekend there is a treasure trove of Innistrad cards now parked in the Card Image Gallery. If you missed the excitement while it happened, check out the gallery now to catch up on the juicy new details!

And don't forget: there is the rest of this week as well as two more full weeks of Innistrad goodies to look forward to! We'll see you then!