The 2010 core set is unique in Magic's history. Unlike most previous core sets, it contains new cards as well as reprints, and that means that every card is hand-picked—not just to fill some role in Standard or Limited, but to take a top-down fantasy concept and execute on it.

Actually, inasmuch as it resembles any previous core set, M10 kind of sounds like ... Alpha. Magic's first set was, by definition, all new cards, and if you look back at those cards, you'll find that most of them pull straight from an archetype that any fantasy fan would recognize.

Take Lord of the Pit: 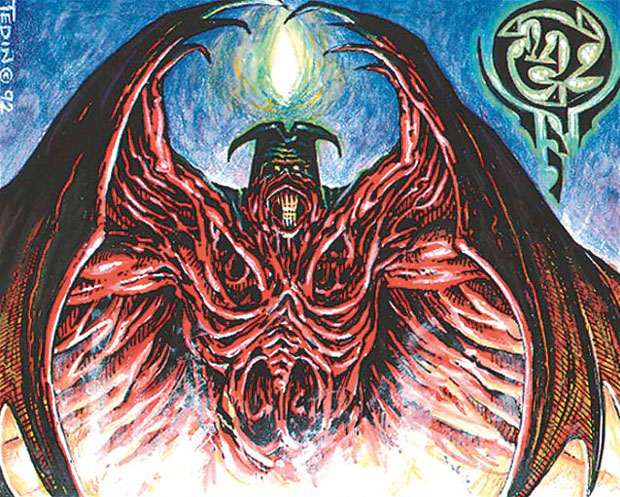 Lord of the Pit is pretty much just "a demon," easily recognizable as such. And what does a demon offer? Great power, but at a terrible price: living sacrifice. Yep, that's a demon all right.

But it's also key, I think, that Lord of the Pit isn't just called "Demon." It's got "Summon Demon" on the type line to tell you what it is, but it's called "Lord of the Pit." Lord of the Pit. There's some menace there, as well as some mystery.

The same goes for Serra Angel or Shivan Dragon. Who or what is Serra Angel? What makes a dragon Shivan? The answers were provided, much later, as we learned that Serra Angel was a white-aligned planeswalker and Shiv was a mountainous region of Dominaria, but at the time, that didn't matter. What mattered was twofold: first, the idea that the world inside this game might be just a little bit bigger than you thought, and second, holy crap, a dragon!

Lord of the Pit doesn't have an unfamiliar word in its name, but it still has a mystery: what Pit, exactly, is he Lord of? I later "discovered" the combo of Lord of the Pit and Breeding Pit, and concluded that they had obviously planned this from the beginning. I don't remotely believe that's actually the case, and really "the Pit" was never paid off. Maybe it's the place where demons come from in Magic? We never did find out what "the Pit" really was, but that doesn't really matter, either.

What mattered was that I loved Lord of the Pit. Loved it.

As my collection grew, I reconciled myself with the fact that Magic cards were destructible objects, some of which really weren't of any use to me (you know, like Islands, which I initially traded away to get more Forests—true story!). At this point, I don't think I'd ever even heard of card sleeves, and events like the infamous Great Milk Spill of '97 (as we actually referred to it at the time) could render entire decks permanently unplayable. It was with that in mind that I set aside certain cards and kept them in those big, clunky "top-loader" card protectors, because they were just too damn cool to risk—cards like Vesuvan Doppelganger, my beloved Shivan Dragon, later Sliver Queen and Mox Diamond, and of course, Lord of the Pit. (I still have the same copies of all of those cards, a fact of which I'm quite proud.) 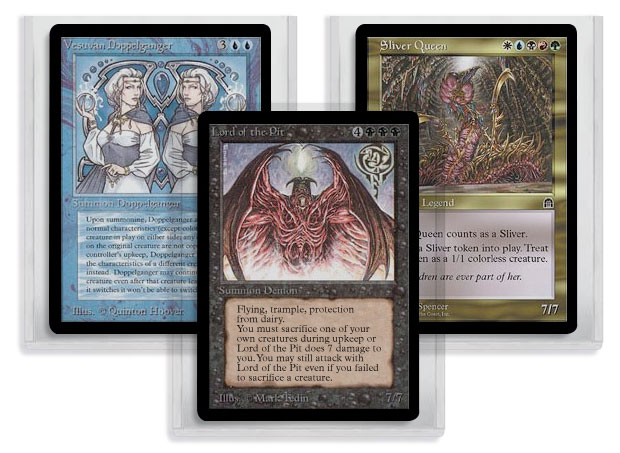 Lord of the Pit went in pretty much every black deck I made, and yeah, sometimes it killed me because I couldn't feed it. It was exciting, standing on that knife edge, wondering if an opposing Pestilence or Disenchant was going to wipe out my fodder or my Breeding Pit and leave me taking 7 to the face, or whether I would get to swing in for the win 7 points at a time. Lord of the Pit also had a starring role in my long-standing black-red-green, proto-Jundian Token Deck.

So ... why I am I telling this crazy story from the distant past during a preview week? As you've probably guessed, it has more than a little to do with the card I'm previewing today. Let's take a look. 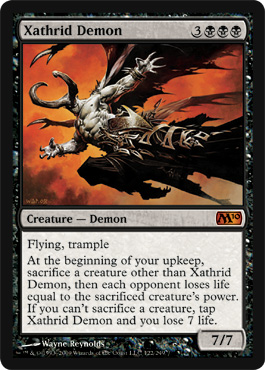 As a 7/7 with flying and trample that taps and deals 7 damage to you on your upkeep unless you sacrifice a creature, Xathrid Demon does literally everything Lord of the Pit does (well, except cost seven). Sounds great!

... And then, on top of that, your opponents lose life equal to the sacrificed creature's power. All your opponents. Yeah, we can work with that. 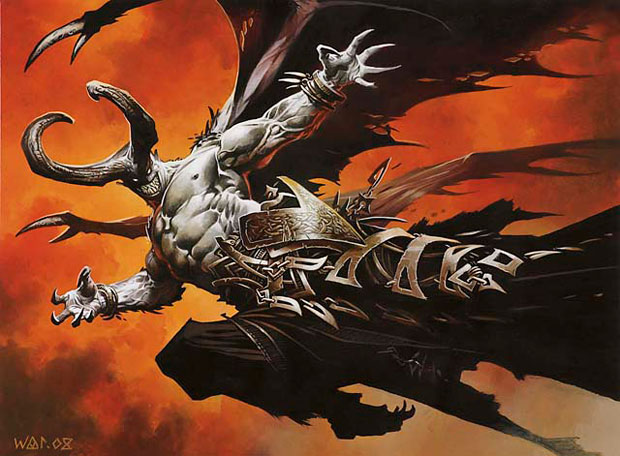 Personally, I'm looking forward to casting this thing just to see the looks on people's faces. They've got to be scanning the board, looking through their hands for removal, and doing a little math. Which creature will you sacrifice? Can they take that much? What about that much ... plus 7?

Now, bare minimum, you can use Xathrid Demon pretty much as if it were Lord of the Pit, and you won't be disappointed. Sacrifice whatever creature you have lying around, or pair it up with Breeding Pit, Puppet Conjurer, Kher Keep, Nuisance Engine, or any other reliable token maker, and you have a threat to be reckoned with. Some of these—Goblin Assault, Sprout Swarm, Lich Lord of Unx, etc.—will even let you get a ping in. My favorite of this group, though, would have to be Creakwood Liege. You can play it with just black mana, it makes a 3/3 token every turn for sacrifice, and it even makes Xathrid Demon an 8/8 while it's at it. 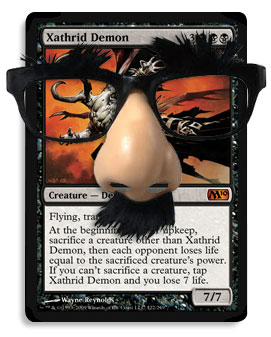 That said, when I play Xathrid Demon, I won't be thinking of it as a 7/7 flying trampler with a drawback. That "drawback," provided you can meet its requirements, is actually an enormous asset in disguise. I immediately began searching for ways to really abuse the clause that makes this card so frightening at the multiplayer table.

Xathrid Demon, unlike Lord of the Pit, presents a tough choice between sacrificing small, cheap creatures (as I would for Lord of the Pit) and sacrificing heavy hitters (to maximize the life loss). One compromise I came up with is to sacrifice large, cheap creatures that have some drawback—one that we don't care about, because we're sacrificing them. Red is king of this sort of thing, with cards like Cosmic Larva, Scoria Wurm, and Shah of Naar Isle offering high power for low cost. Skizzik Surger is a red creature you can even get in a hit with before sacrificing. Skizzik Surger, an Elemental, gets along well with the 10-power Nova Chaser and 6-power Spitebellows (who can also double as removal when sacrificed). And as long as you're playing red, you could fix your mana with another high-power Elemental, Igneous Pouncer.

On top of just finding reasonably priced creatures with high power, you can look for other ways to benefit from sacrificing your creatures. Grave Pact is a great option, controlling the board a bit even as you deplete your opponents' life totals with Xathrid Demon. Haunt creatures such as Blind Hunter and Exhumer Thrull give you an effect when you sacrifice them, and then again when another creature dies—perhaps the next creature you're planning to sacrifice? Cemetery Puca can become a copy of whatever you tossed, letting you have your cake and eat it too. Or how about Deathrender to slap the next big creature from your hand onto the battlefield? And of course, I'd be remiss if I didn't mention perennial multiplayer bad guy Kokusho, the Evening Star. (At last, a way to make Kokusho, the Evening Star good in multiplayer!) Kokusho, the Evening Star's pals Keiga, the Tide Star and Ryusei, the Falling Star are good here too; Yosei, the Morning Star and Jugan, the Rising Star might be asking a bit much of your mana.

No matter how good your sacrifices are, you're in trouble if you run out. You can do this with repeatable Raise Dead effects, from older fare like Volrath's Stronghold and Disturbed Burial to more recent additions like Gleancrawler, Grim Harvest and Wort, Boggart Auntie. You might prefer to put the creatures straight back onto the battlefield with cards like Corpse Dance, Coffin Queen, or Adarkar Valkyrie. You can get multiple sacrifices out of any of the persist creatures from Shadowmoor block, with special mention for the pumpable, mono-black-compliant Restless Apparition. Tatsumasa, the Dragon's Fang is an interesting one; for a hefty mana investment, you can sacrifice a 5/5 every turn. And speaking of Equipment, Demonspine Whip turns every creature you sacrifice into a Fireball.

If you just want to maximize damage, as I think I've said, my favorite power and toughness is */*. Beast of Burden, Mortivore, Nightmare—these are all well and good, but the king in this case would have to be Lord of Extinction, whose *s are just plain bigger most of the time. Why attack one player with a 35/35 when you can kill everybody by sacrificing it?

As a Demon, Xathrid Demon can actually come out to play with some tribal effects, as showcased in my Demon / Ogre deck, Ogredrive. Blood Speaker could be fun there, tutoring up the Demon and then potentially being sacrificed repeatedly. And it does play reasonably well with its fellow demons. I wouldn't want to try satisfying Xathrid Demon, Lord of the Pit, and/or Liege of the Pit all at once, but Grinning Demon fits into the aforementioned cheap fatty with drawback category, and Havoc Demon wrecks the board when sacrificed (although making Xathrid Demon a 2/2, even for a turn, seems wrong somehow). I recommend against Yukora, the Prisoner, however.

Although I wouldn't want to support Xathrid Demon alongside its spiritual ancestors, there's something to be said for piling two Xathrid Demons onto the table. If you can keep the food coming, the life loss will compound swiftly. And when you're ready for the killing blow, you can actually sacrifice two Xathrid Demons to each other. (If you want to get really silly with that trick, you could use Paradox Haze + Mirrorweave to turn all your creatures into Xathrid Demon during your first upkeep, then sacrifice all of them to each other during your second upkeep, slamming each opponent for 7 life times the number of creatures you control. Like I said, silly.)

As long as you're making opponents lose all this life, you might as well take advantage of it. Sygg, River Cutthroat lets you draw cards, Wound Reflection doubles up, and Tainted Sigil could gain you a lot of life. And to take care of that pesky life-gain player, there are cards like Everlasting Torment, Rain of Gore, and Magister Sphinx.

I'm confident Xathrid Demon will find a place in Ogredrive, sacrificing those devoted Ogres until it's time to turn on the other Demons. I can't wait to see how it works out. And while I still don't know what a Xathrid is, apparently that word appears at least once more in Magic 2010. That's one more thing to look forward to.

Call me impatient, but ... is it the Prerelease yet?