The latest in precision destruction for Magic

“Cats and dogs…living together! Total chaos!”

Bill Murray had it right in Ghostbusters – there are certain signs of the apocalypse. This may be one of them. 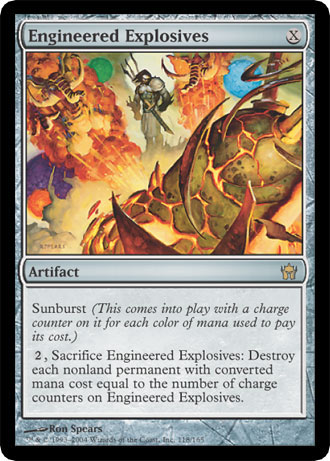 As we sometimes do with more complex card previews, let's handle some rules interpretation issues first (and see Mark's column yesterday for additional discussion of “sunburst”):

With sunburst, Fifth Dawn is inviting us to crack open our dusty box of Invasion block tricks and let them shine again. Much like the “domain” cards of that block, sunburst rewards you for playing more than one or two colors.

But there's something new happening here as well. In Invasion block, players had to play certain colors in certain proportions to get simple things done. For example, a five-color deck would usually have to start with a bunch of green mana fixers, lead through a variety of red and white creatures, and splash in stuff like Probe with kicker to take advantage of the best capabilities of all five colors. You didn't get to play that Probe until you had both blue and black mana.

But here in Fifth Dawn, you can generally play the sunburst artifacts whenever you want – even if your sunburst isn't as high as you'd like in certain situations, these cards will never be stuck in your hand. And even better, if you're willing to play low sunburst value, it doesn't matter which two or three colors you have.

So getting back to Engineered Explosives: if you have a five-color deck, and wish you could get rid of that pesky Dueling Grounds, it doesn't matter if you haven't seen a single forest or plains. You can pay

, get the Explosives into play, and then pay 2 at your earliest convenience to blow up the offending enchantment (and anything else with a converted cost of 3).

Not Pernicious, Yet Still Delicious

Engineered Explosives has a wonderful bloodline, a high pedigree. Listed among its ancestry are such sackable board-wreckers as Nevinyrral's Disk, Powder Keg, Oblivion Stone…and the mighty Pernicious Deed.

Regular readers know that I'm a big fan of Pernicious Deed – I rank it second to no card for multiplayer value. I've been waiting these past few years to see if any new card might supersede the Deed. Nothing yet.

Upon scanning the Fifth Dawn spoiler, however, the Explosives caught my eye. I asked myself: might there be a card even dirtier than the Deed?

Each card has slight advantages over the other in different situations – it's not correct to say that either card is “strictly” worse or better. For example, there will be times when Pernicious Deed will go off with X=5 and destroy low-cost items you wish would stay on the board – maybe something of your own, or something a teammate had, or maybe even an opponent's Howling Mine. There, you wish you could have played Engineered Explosives, which for a lower total converted cost (

+ 5 = 8) would have only destroyed the Serra Angel, Rushwood Elemental, and Shivan Wurm – you know, the stuff that probably made you set the Deed at 5 in the first place.

But I feel the Deed will likely remain the overall champion, by a fairly comfortable margin. It fits into more decks (including any deck that can give a full sunburst to the Explosives), requires a lower initial investment, and is an enchantment instead of an artifact. (That last point may not sound like much; but at last count, there are only two colors – white and green – with multiple, flexible Type I tools to remove enchantments once they hit the board. There are three colors – white, green, and red – that can do so for artifacts.)

Here's a comparative rundown of the two cards:

Setting Pernicious Deed aside, how would we build a deck with the Engineered Explosives? The question's a bit of a trick in my mind, since destructive utility tends to go in any deck that wants it. In that sense, you could put Engineered Explosives into any deck that might use Powder Keg, and you'd do okay. But there are ways to take slight advantage of the sunburst and/or other elements.

Here's one way you could go: since an ideal Engineered Explosives will go off for four or five, we could set up our deck to avoid major losses at that point. That doesn't mean we necessarily sacrifice power:


The Collective Restraint is the only card truly at risk from an Explosives. The only other permanent at four mana is the Rukh Egg. The Dust Bowl is there to handle the only type of permanent threat the Explosives can't handle: non-basic lands.

There are many sunburst creatures coming that would play well in this deck. Some are very large. Keep your eyes open!

There may be some of you who feel five charge counters is not enough to deal with the stuff you see at your table. If you must use Engineered Explosives but (to paraphrase Spinal Tap) “must go to eleven,” here's a list of ways I know to get there, and there may be more ways coming in Fifth Dawn.

There might be a deck there, but you're on your own!

Arm Yourself With Explosives?

As with last week, the question will arise: how hard should casual players try to get four of these?

For now, the best point of reference is probably Oblivion Stone, since the two cards do similar things and are in a similar tournament environment – and as we know, perceptions of tournament utility can make a card harder (and pricier!) to find. I don't think I need to do a long analysis here: Oblivion Stone enjoys status as a solid, but not exceptional, rare. It was a bit overhyped. I'd expect the same of Engineered Explosives – but any hype might be true, if “sunburst” decks become popular.

But if I were looking for rares that might help my decks right now, and if I took sunburst seriously for casual play, I'd look pretty long and hard at two rares not in Fifth Dawn: Sundering Titan to hurt opposing sunburst strategies; and Global Ruin to complement my own. I don't know that they'll see visible price changes for traders; but casual players may want to consider decks that use them, if they're handy.

Bottom line, you will see Engineered Explosives in a variety of environments. They'll be challenging to use correctly, and I'd recommend building decks that use even one or two copies of them, just to get a feel for how they force you to think strategically. Here's to good luck and a long enough fuse!

You may contact Anthony at seriousfun@wizards.com. Anthony cannot provide deck help, no matter how many charge counters you manage to get on your Engineered Explosives.