Bruce's games invariably involve several friends, crazy plays, and many laughs. Bruce believes that if anyone at your table isn't having fun, then you are doing it wrong.
Share Article
Share Tweet Share
Double, double toil and trouble;
Fire burn, and caldron bubble.
Fillet of a fenny snake,
In the caldron boil and bake;
Eye of Newt, and toe of frog,
Wool of bat, and tongue of dog.

estering Goblin has always been a card I love. When I got my copies of "Uncle Fester" during Onslaught, he regularly went in decks. He was a Goblin I loved to sacrifice. I liked the art and just the idea of referring to him as Uncle Fester. I seriously considered building an Addams Family theme deck just because of Uncle Fester.

Festering Newt, while not a Goblin (but hey, Salamanders need love too!), offers everything that Uncle Fester can give you. The obvious is blocking a 2/2 creature and trading with it, but there are plenty of games when you can sacrifice Festering Newt during an opponent's combat with another opponent, just to make sure that a creature that was almost dead, actually died. It was great watching Uncle Fester come back from the graveyard again and again to chump block and cause all kinds of trouble with combat math, and I'm looking forward to doing that again with Festering Newt.

...unless a Bogbrew Witch is in play. The Witch makes Festering Newt into a real issue. It was one thing to have Uncle Fester trade with a 2/2 early in the game, but his value disappears as the creatures get so much bigger. Festering Newt, with a Bogbrew Witch on the battlefield, makes everyone nervous. When your opponents can't attack or block unless their creatures have at least 6 toughness, it really limits what can be done. I can picture the Newt as a major defender while your opponents attack each other.

Besides, everyone knows that a Newt by itself isn't all that impressive. 1 But a Witch can take a Newt and really make it something to be feared!

The real problem with cards that refer to other cards is getting them both in play at the same time. To make that happen with some consistency, you are going to want a card that tutors for creatures. Thankfully, black has several good tutors you can use. The problem with those cards is that they use up another space in your decklist. Now you have several copies of a tutor, Festering Newt, and Bogbrew Witch.

I have heard, however, that .

For two mana, Bogbrew Witch will find a Festering Newt for you! She probably only wants the eye, so you can use the rest. Using the Witch gives you a creature that will stop many attacks against you. Most players simply won't throw their armies of creatures at you if they know you can stop a 5/5 in its tracks with just a Newt. The downside with the Witch is that it brings the Newt into play tapped, so you can't simply activate it when you need a blocker. You need the Newt sitting on the board untapped and ready to go if you are hoping to block.

There are times when you will want to sacrifice Festering Newt and no one is attacking you or is willing to block your 1/1 Newt. Being able to give a creature -4/-4 is great, but you really want to be able to do that when you want to do it, not when an opponent let's you. This means that you are going to want to consider a "sac outlet." Cards that ask you to sacrifice a creature you control as part of a cost for something else are referred to as sac outlets. In black, there are plenty of sac outlets. You can probably find one that gives you a benefit you were looking for. Damage and card drawing are two of the more favored options, with Blasting Station and Altar's Reap being examples of those options. Once again, you will be adding another card to your deck, but it is probably worth it. The downside is getting it into play. For all of this to work, you need all three cards and will probably want a tutor to get the sac outlet onto the battlefield.

Yeah, I'm setting up another card just like I did the last time. Bet you can't guess what does?

Now sacrificing Newts is a whole different story! This is why this triumvirate of cards shine in multiplayer games! Gaining 4 life and taking 4 from a single opponent is nothing to complain about, but when you are in a four-player game, you'll gain 12 life and everyone else will lose 4 life. That is a serious point swing! I can easily picture a scenario where you sacrifice a Newt then on the next turn you search for the second Newt and get it on the battlefield for the next round! So, 24 life gained and each opponent loses 8 life. This is the sort of combination that will demand immediate attention from your opponents. If they plan to deal with you using their creatures, they should take care, since I haven't even mentioned the two instances of -4/-4 from the dying Newts!

It should be remembered that if you are using Bogbrew Witch to put the Bubbling Cauldron onto the battlefield, it comes out tapped. You will likely want to wait until the end step before your turn starts to activate the Witch and get her Cauldron.

So what is the net result?

Bogbrew Witch: You have a 1/3 blocker for four mana. You might want to consider activating her ability and giving the Witch a Cauldron in which to stir her brew.

Bubbling Cauldron: You can sacrifice a creature to gain 4 life. If you don't have a spare creature, then I expect your Cauldron will be safe from any artifact destruction since it doesn't threaten anyone.

Festering Newt: You have a 1/1 with a minor ability that your opponents will be happy to see you use before a Bogbrew Witch shows up to make him truly nasty.

Bogbrew Witch and Bubbling Cauldron: You can block some creatures and sacrifice a creature to get 4 life. Perhaps a Festering Newt would improve your lot?

Bogbrew Witch and Festering Newt: Ahh, you have a pretty solid defense and you are likely threatening to do a lot more. Perhaps one of your opponents will decide that killing your Newt now is better than waiting for the Cauldron to appear and cost him or her life as well.

Bubbling Cauldron and Festering Newt: You are a minor threat to creatures, since the Newt will give one of them -1/-1, but really, everyone is waiting for you to throw your Newt into the Bubbling Cauldron as part of the bigger life gain and loss.

Bogbrew Witch, Festering Newt, and Bubbling Cauldron: The trifecta! If you give a Witch a Newt to throw in her Cauldron, your opponents lose 4 life each, you gain all that life, and one of their creatures is taking a serious hit!

Now how should we get the Festering Newt back onto the battlefield so we can do it again? No no, that's all the cards I have. You'll have to figure that one out on your own! 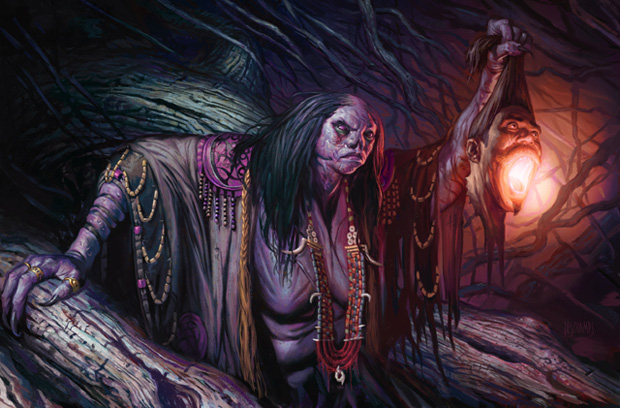 While these cards do have some interesting play in multiplayer games, for me, they have kicked my Vorthos into high gear. It is time for a Shakespeare-themed deck: 2

Deadbridge Chant and Gravedigger aren't perfectly on theme, but the poem itself could be considered a chant, and the Gravedigger from Tempest reminds me of the "alas, poor Yorick" scene from Hamlet . I can't promise it will be an all-star in your next game, but the rest of the cards stay on theme:

Double, double toil and trouble
Fire burn, and caldron bubble.
Fillet of a fenny snake,
In the caldron boil and bake;
Eye of Newt, and toe of frog,
Wood of bat, and tongue of dog,
Adder's fork, and blind-worm's sting...

1: I was going to make a bad political pun here, but I figure Gingrich is probably some low-hanging fruit that I should just let pass without comment.( return )

2: My thanks to John Dale Beety, who pointed me to a variety of Shakespeare-related Magic cards. I went a different route, but there are many different options when it comes to Shakespeare and theme decks. ( return )