ou're staring down a gaggle of beasties, each one baring teeth, claws, and other unpleasant implements of flesh rending. You look left: more terrors and creepers. You look right: even more things that go bump in the night. Behind you lies only the cold, damp stone of a dew-filled night. At your sides: a broken arm and snapped, dulled sword. Above you: a cloudy night lit up by a full moon. Below you lies only where your blood will soon pool. 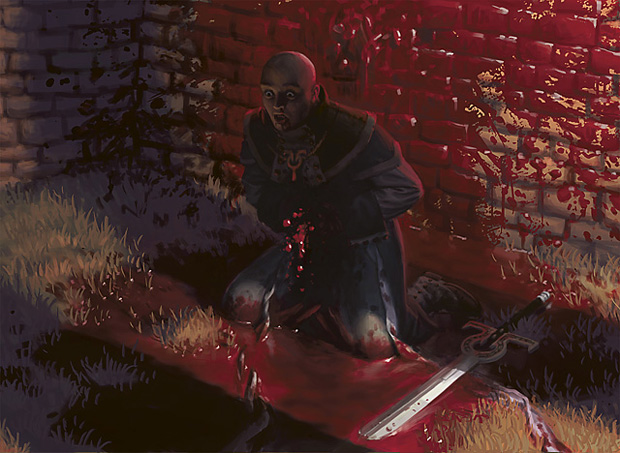 Stop. Right. There. This is a game, not a fancifully dark tale of intrigue and comeuppance. The puppeteers of horror on Innistrad are nothing more than figments of a collective, and clever, imagination.

Between flitting spirits, stark raving mad predators, and royalty that bites, it's easy to forget about the shambling of undying bodies that show up late to the party.

You want to be a good host for them during Undead Week, right? I mean, even if you lock the door and turn out the lights they're too dull to take the hint. 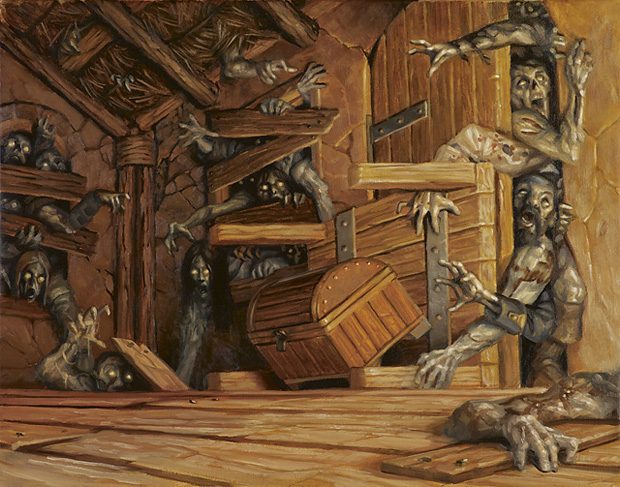 Even worse, these are particularly demanding guests. Fresh flesh! More brains! You can clearly understand the frustration in their moaning gargles when such simple requests (that can obviously be handled by the abundance of tissue around us!) go unfulfilled.

So buckle down and get dirty with our nibbling numbs; it's time to play a little Magic tailored to the rotting zombie-folk.

Let's start with something new. Peter Knudson, a former Magic R&D intern and a face we'll come back to later, recently shared one of the most interesting and exciting ways to play cooperatively. While variants like Star and Archenemy provide some cooperative elements, every way to play is predicated on at least one player being "the enemy" and the goal of the game is to defeat them. A format with everyone actively playing the game is on the same team, with the same goals for victory, hasn't hit before.

Think you and your friends could survive something like a zombie apocalypse? Welcome to Horde Magic!

You can read a lot more about the creator's thoughts in his article, but the main point is that it should feel like a mindless horde out to savage you. Speaking of the horde, grab your cricket bats as this is what was proposed as a Zombie-based horde deck:


As Peter put it:

This is the current iteration of the Horde deck. Just like a cube, this is a living, breathing object, so it should be altered to fit power-level of the Survivors or if new cards come out. For example, we can add Army of the Damned and Endless Ranks of the Dead because of Innistrad. I'm trying them out for now, but it's probable that 13 Zombies is just a little too good.

Of course, if you and your friends find things too easy to handle, sprinkling some Gravediggers, Ghoulraisers, and Ghoulcaller's Chants will up the ante considerably. And if building a Commander deck specifically to fight a Zombie horde is up your alley, check out what popular Commander writer Robby Rothe wrote recently as well! I'm very interested to hear your thoughts on Horde Magic, and I know Peter is as well, so please comment and share in the forums!

If sudden death with one life seems a little pale, then I have a spicy classic Serious Fun recommendation for you!

Kelly Digges' fantastic article details the now epic exploits of just such a game. I really recommend reading that as it hit on so many of the little things that make Respawn Magic great. A bit a trivia: one of the participants in that game was Horde Magic creator Peter Knudson, as it occurred during one of his internships at Wizards. Once fun is in your blood it's impossible to boil out! 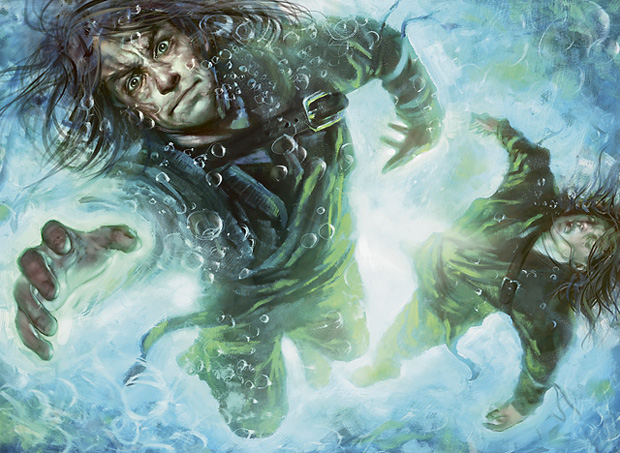 Back from the Brink | Art by Anthony Palumbo

What makes Respawn Magic more special than other, more rule-intensive variants is that it's highly adaptable through a variety of customization options that can help any group jump onboard the speeding locomotive of multiplayer:

Both new kid on the block Horde Magic and proven veteran Respawn Magic promise undying fun, but there's one more format you can try. This one is specifically about being undead.

About three years ago, our local game store's casual crew organized weekly Zombie Magic games for two months. While I was fairly new to the group at the time I found it to be a hilariously clever format, as the politics of a table where a hard-earned ally is suddenly, unwillingly, turned into an enemy are something completely new to most games. 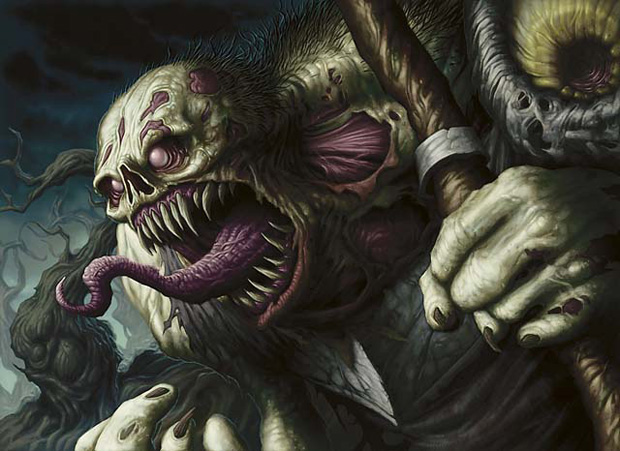 By the end of the third week or so, specifically crafted Zombie Magic decks appeared, packed with ways to both stay alive longer (through life gain and damage prevention effects, like Fog) and help out any Zombie minions picked up (with Spectral Searchlight and Trade Secrets being the most prolific).

It's a ghoulishly good time!

For Whom the Poll Tolls

I tried to pack as much Magic potential into this week, and I hope at least one of these formats finds a way to keep your love for Magic undying! Of course, if you've already tried some of these ways to play, have even more awesome ideas for undead Magic, or have an idea to share just jump in the forums! We'll be lurking there for you! 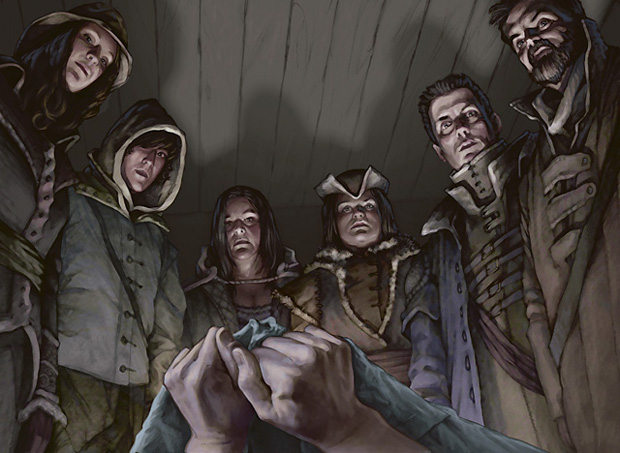 Your feedback through the forums are more important than ever before, because there's an ongoing issue many of you have noticed: the weekly poll is "broken" and doesn't register a vote from some browsers. While an immediate fix (or improvement) would be amazing, it just isn't possible in this case. Therefore, until the issue is resolved, I'm putting the weekly poll on hiatus.

I firmly believe the poll shares useful information, even if it's missing an unknown number of responses (including my own from when I tried to vote). For example, last week's poll asked for your feelings on Winchester Draft:

I expected a pretty even split—Limited isn't everyone's cup of tea—and that's certainly what we got. I was also pleased to see that those of you who enjoy digging in the details liked that they were there, but they didn't bog down an otherwise refreshing article on fun.

However it's also obvious that the count of responses is abnormally low. I usually hear from several readers each week that "the poll didn't register my vote, so here's how I feel." I'd like to take that to the forefront.

Not running a poll doesn't mean I don't want, or am not interested in, weekly feedback. On the contrary, I'll take all that you're willing to share! So, please, in lieu of hitting a button and moving on, take a few more seconds to share in the forums, send off an email (I get them, read them, and occasionally respond to them directly!), or mention me on Twitter (I'm @the_stybs).

There are a lot of fire starter questions I could challenge you with, so you take your pick:

Whatever is on your mind, just send it off! Let your voice be heard! Join us next week when I blatantly steal from Mark Rosewater, again. See you then!