light of recent columns on sanctioning team formats and various limited variants multiplayer enthusiasts can try, I'd like to spend a column hammering home a format our play group has found extremely rewarding: Emperor Draft. We'll go through the who, what, where, and how.

How Many Can Play?

There will be two phases to the game: drafting and playing. After selecting teams and deciding who will be emperor on each team, the group drafts cards as you would in a “normal” booster draft. (Yes, you can do this as a Rochester draft too; but that's too complex. For more information on booster and Rochester drafts, read DCI floor rules and/or half of the Magic columns on the Internet.)

After drafting, teams sit down together and build their decks. No sharing of cards between team members – but you're welcome to strategize together on how you'll build.

Then, you add lands and play a regular Emperor game, using the limited decks you have.

Where Do I Sit?

Naturally, this depends on how many players you have. Our group always gets confused (especially with nine players). Use these charts to help, and bear in mind these seat orders are for drafting, not playing. (When you play, each team sits on their own side of the table, as usual.)

Six players, teams A and B:

Eight players, teams A and B, using a “general” who'll play inside the lieutenants, next to his or her own emperor:

Nine players, teams A, B, and C…FIRST OPTION flanks each emperor with a specific team, which creates long stretches between an Emperor and one lieutenant:

Nine players, teams A, B, and C…SECOND OPTION spreads each team out more evenly, but creates a slightly less regular pattern:

Ten players, teams A and B, each team has two generals who'll play between a lieutenant and the emperor:

OR, this option has a different symmetry:

If you're a lucky enough dog to have twelve players regularly showing up in your group, then you have 11 friends to help you figure out where everyone should sit.

Once again: the graphics above explain drafting seating. Once you're done drafting, you all get up, meet with your team, build your individual decks (without sharing cards), and come back to the table to sit in normal emperor fashion.

The most beautiful thing about Emperor Draft is the way it forces people into “silly” picks – and entirely new deck types.

Consider the following pack, taken from an actual draft analysis from a Real Tournament Magic Writer: 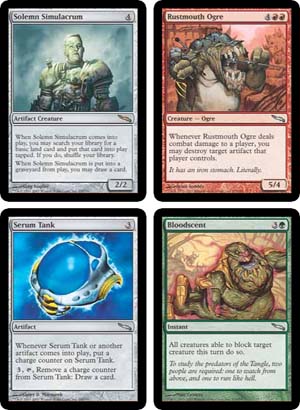 There are all kinds of people out there who'll tell you what the best pick is for a duel – honestly, I don't currently care which card that is. What matters here and now is that for a pack like this, the way you'd make your decision in Emperor is very different from the way you'd decide for a duel.

For a duel, you'd narrow down your choices fairly fast to the removal, and quality creatures. A “smaller pack” you'd figure out your #1 pick from would include:

(Don't overanalyze this. The point is, there's a mix of creatures and other spells in there that get your attention more readily than the rest of the stuff.)

But if you're in an Emperor draft, you don't use that particular “smaller pack”. For a six-player Emperor, you are thinking in one of two different ways. The lieutenant's “smaller pack” is pure rush and removal. (For those of you that remember my emperor series from December (starting with “Emperor Imperatives”), I don't think it's easy to build a very good defensive lieutenant deck from Mirrodin block – you take away spells your emperor probably needs, and you aren't guaranteed a very effective set of cards. That said, anyone can play Crystal Shard!) Here's what it might look like, using the sample pack above:

(Solemn Simulacrum, you try to pass if you open as a lieutenant. More on that in a moment.)

Meanwhile, here's what the emperor sees as his “smaller pack”:

Let's look at another pack to see an even sharper difference. Imagine you open this as an emperor: 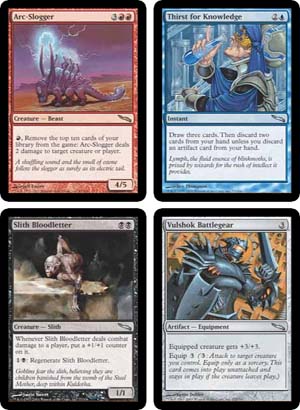 Where's your first pick? The Slogger looks nice until you realize you're more likely to deck yourself than help deal enough damage to an enemy lieutenant and emperor. The Vulshok Battlegear (or any equipment) is often dead, unless you think the lieutenant to your right will pass you a Spikeshot Goblin (don't count on it). The other quality creatures – Tel-Jilad Exile, Slith Bloodletter, Hematite Golem, and even Yotian Soldier are all mediocre options for you.

Your “smaller” pack for a first pick is Irradiate and Regress. That's about it. There are worse cards than Irradiate, right? So take it.

The real fun begins when you figure out how to ship cards to your teammates. As an emperor, you know your nearest lieutenant will get either the Vulshok Battlegear or the Arc Slogger. You can even guess that the Regress will make it to the opposite emperor, who will likely choose either that, Thirst for Knowledge, or Gold Myr. That means your other lieutenant will be getting a fairly hot choice of aggressive cards.

It doesn't matter so much what the exact picks are. The point (as with a normal, tournament duel draft) is to pay attention. Echoes come back fast and furious with this draft. If the Regress and Thirst for Knowledge make it back to you for pick #7, you can be fairly certain the opposite emperor is not that interested in blue – maybe that's a good second color for you. If Tel-Jilad Exile is actually still in the pack, that means the two lieutenants to your right found better, non-green picks. (Hematite Golem and Slith Bloodletter, perhaps.)

And thus we come to a decision. If you've already passed amazing green to your left, you may assume the color is heavily underdrafted and start taking it for yourself. If you haven't seen much other good green, maybe one of the blue cards is a better idea.

That pack wasn't much fun for the emperor. Here's one that would be more fun to open: 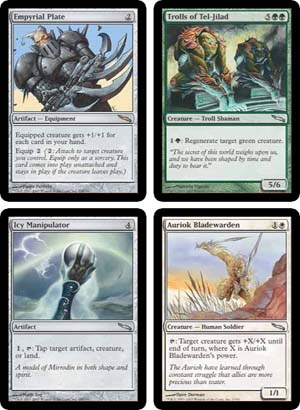 Icy Manipulator is probably your first pick; but notice the incredibly cool tricks green is offering! Wurmskin Forger (even without a Crystal Shard) is terrific; and the seven-mana cost is barely noticeable to an emperor. Trolls of Tel-Jilad is a bit riskier, but you could challenge the odds and assume that one of your teammates will also be in green. If either of these cards comes back to you, you snap it up and dig into green as hard as you can.

More likely, at least the Trolls will be gone. It's highly likely that your enemy lieutenant took Empyrial Plate – excellent for a lieutenant, not good enough for an emperor – and Trolls feels like the best card left for a rushing mage. What great information for you to have! If the next pack or two has a solid non-green, non-artifact card, consider shipping it to your left, so you can comfortably seat your enemy in a color that won't hurt you or your teammate to his left. As long as there isn't an amazing green card for the first few picks (and you could snap up anything like Deconstruct or Creeping Mold for yourself), future green should make it through okay. 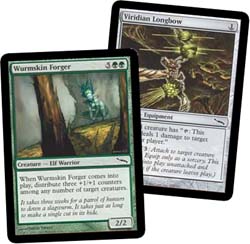 It's perfectly possible, though not probable, that Terror will make it back to you (remember there are only six drafters here – and I could easily see picks of Icy Manipulator, Empyrial Plate, Trolls of Tel-Jilad, Wizard Replica or Wurmskin Forger, Vulshok Guantlets, and Skyhunter Cub going first). That's a huge signal. But you're certainly happy with a seventh pick Wurmskin Forger or Viridian Longbow, anyway.

By the way, if you're a lieutenant, you have to keep in mind that good spells that aren't creatures are at a premium. Even though I just said Terror may make the rounds, it's more likely it won't – so when you see it or something like it, you may want to grab it. Good emperors in this format won't run many more than 5-10 creatures – so you'll get your share! Let a Somber Hoverguard or Tangle Golem go, if you see a Deconstruct or an Unforge that your deck can play. (I think you take the Deconstruct anyway, am I right folks? But you get the idea: in any close call, take the quality non-creature spell while you can.)

Here's a list of Mirrodin and Darksteel cards you wouldn't expect to be that good in limited, which get a good deal better if you're an emperor.

Email Rash Prevention Program (ERPP): I didn't bother including cards that most players accept as solid, e.g. Spikeshot Goblin or Test of Faith. I'm not saying any of these are as good as a Spikeshot Goblin (though Voltaic Construct comes close). I'm also not saying all the cards here are horrible – I'm sure your win in last Saturday's tournament was completely due to the fact that Scrounge really is amazing, and underrated by far too many people.

I'm just sayin' – if you play this format, don't pass them without thinking, as duel players often do.

Much better (consider as first pick):

As for how you play your deck, after you draft it? Well, go read that emperor series I just did in December. If you have additional strategic questions, use the message boards or the email address below to ask.

I'll return to this topic if I see enthusiasm out there for it. In the meantime, one tip for the drafting lieutenant: Relic Bane played on an emperor's artifact land is very, very good!

You may email Anthony at seriousfun@wizards.com. Neither he nor his lieutenants can provide help building your decks, so please don't ask.