nnistrad is almost here. Unlike the dark, looming specter of a corrupting invasion (see Scars of Mirrodin for details), the pervasive sinking feeling of Innistrad is actually comforting. The bits and pieces of "scary things" from all over the gothic horror genre have drawn me in, and set the bar for excitement very high.

The first week of Innistrad previews had me excited—I was handed a Demon that functions as a fount of bloodshed, continually killing as things are killed. The second week allowed me to share something wild that served as a replicator, converting every new addition to our side of the party into an Avatar. This week is the third, and final, week of previews. I had headed into this week apprehensive that the flow of awesome would taper off, becoming a less exciting trickle of the last scraps.

Sometimes, I relish being completely wrong. This time, I was so wrong I felt transformed.

You see, Reaper from the Abyss and Essence of the Wild are fantastic creatures to mess around with. There are many very clever things to do with both of these new cards (as well as many of the other cards you can find in the Card Image Gallery). I love that I can share a few suggestive ideas and count on some of you to put on your kitchen apron and start cooking. New stuff is neat!

But this week is something a little more direct. It's spot on for flavor, and perfectly clear about what's going to happen. You should probably bring friends, because it's bringing some of its own. Meet Bloodline Keeper: 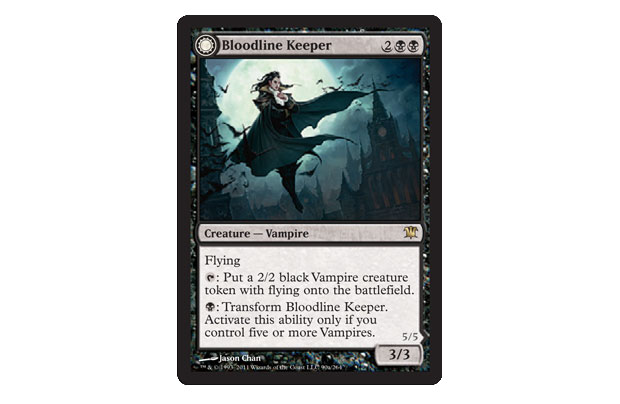 There's a common phrase the floats about my local game store, and it's a vernacular most appropriate here: anytime someone makes a token (or tokens), we say we're "making a baby [or babies]." This guy actually makes babies.

Well, not the screaming, crying, diaper-wearing kind of babies, but I would assume these get hungry all the same. This keeper of a bloodline has one mission: a hostile takeover of the battlefield, one Vampire at a time. It's an obvious thing, really. The question then becomes, "What does it do when he's built up a coterie of followers?" 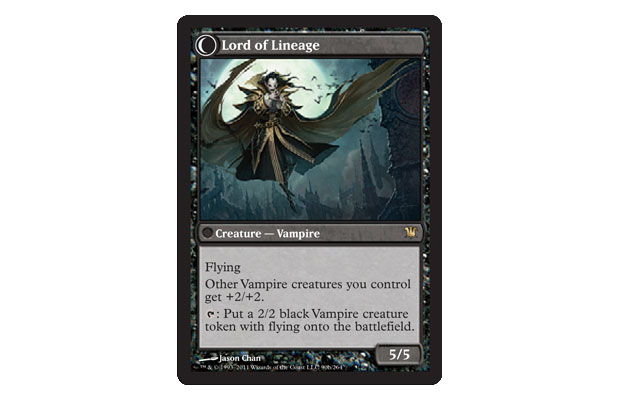 On a plane with vampire royal houses and nobility, one must always be aware of the lineage. And, if you lineage is strong enough, you can transform yourself into true power.

Army in a Slow Release Capsule

So let's try showing this off again:

Yes, this card is one of those newfangled transforming cards. All transform means is that when you satisfy the transform requirement (in our case, spending

when you have at least five Vampires), you turn the card over to reveal its other face. There's a little more to it, but once you've gotten the hang of things it will feel natural. 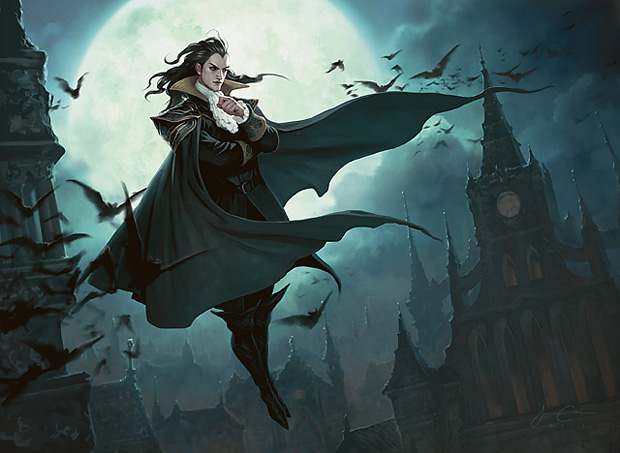 Our package is a pretty persistent Vampire: both sides can reward up with an ever-growing collection of bloodsuckers, and transforming from one side to the other injects your army with a burst of blood-based nitrous. The best part of the transformation is that, while you can't change it back, you really don't ever want to.

And, by the way, your reasonably sized Vampire with flying gets even bigger too. That seems pretty useful.

Attack of the Vampires


"Clever" is not the word I would use to describe this deck, but it would bring a smile to my face all the same. Modeled from the various attack decks that have appeared over time, Vampires have been bringing options to the table for some time.

There are little things that can attack well or add value (such as Pulse Tracker and Viscera Seer), modest things that feel powerful (such as Gatekeeper of Malakir and Kalastria Highborn), and every level of Vampire mayhem is bumped a notch by Bloodline Keeper transforming. While Day of Judgment will wreck our plans (or at least set them back quite a bit), most decks that plan to attack every turn are susceptible to that anyway. It's just how things are.

Furiously flicking an army of darkness onto the table is a great foil to fellows who bring similar decks in red or white, but there are ways to have even more fun.


Fellow Innistrad native Olivia Voldaren is a Vampire on a mission of conscription. Conspicuously absent in this deck are ways to simply kill an opponent's creature. Intentionally avoiding outright destruction (where possible), we're in the business of taking what should already be ours: the fealty of every other creature. 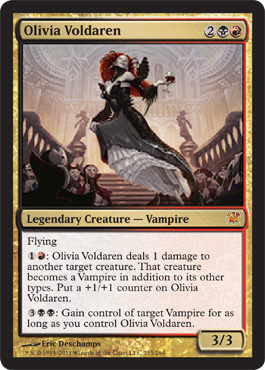 Vampire Nighthawk, Skeletal Changeling, and Child of Night subtly encourage opponents to attack elsewhere, while Arrogant Bloodlord helps keep everything but the weeniest of weenies in check. Once we slip a critical mass of Vampires into play, something Bloodline Keeper helps us achieve, we can begin to steal everything else. Captivating Vampire lets us tap five to take, and that magic five is where we upgrade from Bloodline Keeper to Lord of Lineage. Olivia steps up to bat as well, giving us a way to "borrow" from opponents without tapping any of our creatures.

Being a mana-hungry deck that relies on said creatures, ensuring we keep a stockpile of both is a good idea. Rakdos Signet and Armillary Sphere should let us hit big mana much sooner, and a fully empowered Death Denied is like drawing all the creatures you wanted anyway. Since it's an instant you can even surprise reload at the end of someone's turn!

But there is one spell that can really push things into overdrive: Conspiracy. We're dealing with tokens here too, after all. Transforming a very innocuous-looking deck into an overrunning Vampire horde is a snap.

1 Go for the Throat 1 Dismember


Variety is the spice of life and we're dishing it out in droves here. With Bloodline Keeper and Conspiracy the two most likely to pop up, we can spend our efforts sculpting a board filled with token treasures. Squirrel, Beast, Eldrazi Spawn, and Saproling (and more!) tokens become interesting things to make. 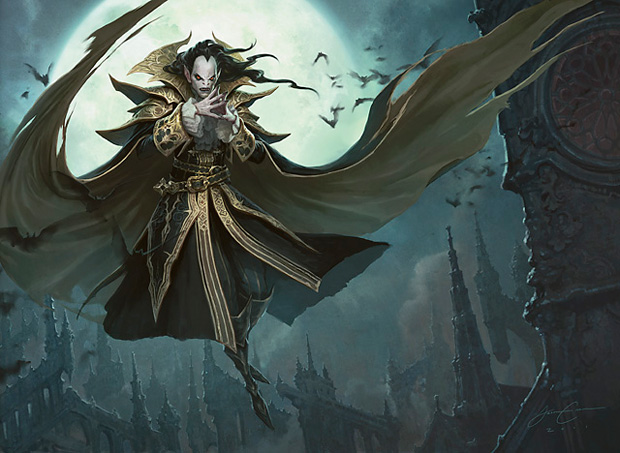 Once we've revved the board up with relatively unfrightening things we can activate our combo. First, we drop Conspiracy set to Vampire, then follow with Bloodline Keeper. A quick dab of

after that and our army will go from fluffy to ferocious.

Once online, Lord of Lineage lets us upgrade some of our troops further:

Ensuring that all this happens is an assortment of mana ramping. If you'd like to you can shortcut the combo and use Eldrazi Spawn to get everything out in one shot. Even wary opponents may not be expecting that!

The time of Innistrad teasers is coming to a close, but there's still one open weekend before our first chance to transform. Last week's poll asked about something close to my heart: Prereleases.

Far and away, going to Prereleases is the highlight of experiencing a new set. Mixing players of all levels of familiarity to share in exploring the new, I've found more fun seeing what others see than if I simply opened packs on my own.

Some of you expressed a few concerns about player familiarity (how comfortable they are with the rules) and Prereleases. Let's make one thing clear: Prereleases are exactly the type of event a new player should attend! While dealing with new cards can be a little intimidating, the cards at Prereleases are new to everyone else too.

Judges and event organizers are aware that new sets come with a little learning curve. That's why the rules enforced at these events, like at Friday Night Magic, are meant to encourage and teach rather than punish. This doesn't mean rules aren't enforced, but when you have two very similar cards (say Soul's Might and Soul's Majesty) in the same deck, then you excitedly cast one (Might) as if it were the other (Majesty) and draw those cards, the game isn't over. (Because it was an honest accident, the end result when I did exactly this was that I had to randomize my hand, put it back on top of my library, draw the number of cards that were in my hand before drawing any extra, and then resolve Soul's Might as normal.)

The best way to feel better about playing Magic is, happily, playing more Magic. This was part of the force behind the introduction of Planeswalker Points. Nobody always has the best day playing Magic, but avoiding playing at all because you're afraid to lose or ask questions is silly. Prerelease Events are just the type of event for you!

Another point raised was that there isn't always a local Prerelease to attend. If stepping up and working with a local store to have more events in your area is something you'd commit to, the Wizard's Play Network is exactly what you were looking for. Local good guy Don, for example, detailed his adventures in getting not one but two WPN locations up and running.

If a busy home-schooling-shopkeeper-professor-by-night type can do it, the odds are pretty good that you can too!

This week's poll is another direct question:

I'll be having a blast at my local Prerelease, and I suspect that I'll have ample chance at all three options. If there's something you're curious to see from the start now you're chance to tell me!

And, as a reminder, I'm still taking stories from you about your local play group. What formats do you play, and why? How to you teach new members? Do you meet in one location, or several? I'm interested in hearing anything you want to share about what makes your local play group work. Magic means many things, and it means even more to a group of players who meet to game. Share with me and the odds are fair that you may end up sharing with the world!

Join us next week when all will be revealed! See you then!