agic is a collectible game. Whether you're trying to get every copy of a specific card you can find, filling out storage with complete sets, or heading to a Grand Prix to have an artist sign cards, building out the stash of cards you own is a challenge. It takes time, effort, patience, luck, and investment.

It's easy to forget that after spending years gathering the cards I like into a handy box for deck building that there was ever a time I'd have to scrape, scour, and dredge enough for a deck. The human brain loves to take shortcuts, and mine often bypasses looking at lots of cards for "What's in the box?"

This is Golgari Week, meaning I have a good reason for going deep. Last week's walkthrough of my process for building decks took the aforementioned cheat, using my Commander Box to let me focus on the mechanics of construction. Not all of you can take the shortcut. As GeekyDad asked in the forums:

How do you build a deck if you don't have a bookcase full of cards, but only, say, a backpack full, with mainly commons and uncommons? Especially if Commander's supposed to be a casual format to get new (or returning) players into the game?

These are tough questions. Answering them requires getting hands dirty, suspending squeamishness, and being honest with ourselves. I'm on board for all three. 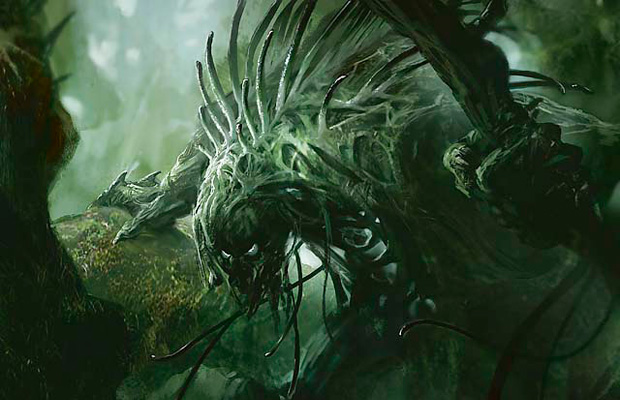 What are we Answering?

Before we get too far ahead of ourselves, let's look at what I'm trying to solve for building a Commander deck:

These, put another way, are restrictions. They will limit what players can do, and how they can do it. Translating these into specifics:

These limits are not small challenges. Commander decks usually carry 60–70 unique cards if you're using basic lands as the majority of your mana base. Currently, Standard has 1,139 nonbasic cards to choose from, so 65 cards is almost 6% of everything eligible. And it gets worse.

Commander restricts the color identify of cards to what your commander has. This means your choice of commander affects your options outright. If you want to check out Standard to build a deck around Mikaeus, the Lunarch, your options drop to fewer than 300—or more than of 22% of Standard-legal cards with a white or colorless color identity.

Since I believe choosing your commander is so important, and something that's desirable to pick from outside of Standard, I decided on a three-color commander from last year's Magic: The Gathering Commander release: Ghave, Guru of Spores. Why Ghave?

Ghave, Guru of Spores is just for an example. The commander you choose can be built around in the same way.

How are We Answering?

The process for building can be as simple as what I like to do: grab the piles of cards you already have and start pulling out what you want to use. For today, I followed a more complex route: I pulled up every card in every set in Standard, looked over what it did, and wrote down every card I liked and why. If you want to see the raw work, it's there, but we'll make sense of it below.

The only way to pull together a deck from scraps is to understand what all of the cards you have can do for you. Thanks to Limited lunches, I had a handle on some of the lesser-seen cards in Standard inasmuch as I'd tried using them before. By gathering up different groups of cards classified in similar ways, we can assemble a deck through modules of effects, all while minimizing the rares we'd want to include.

The first thing I wanted to get out of the way was which rares would be the easiest to ensure we had for the deck. 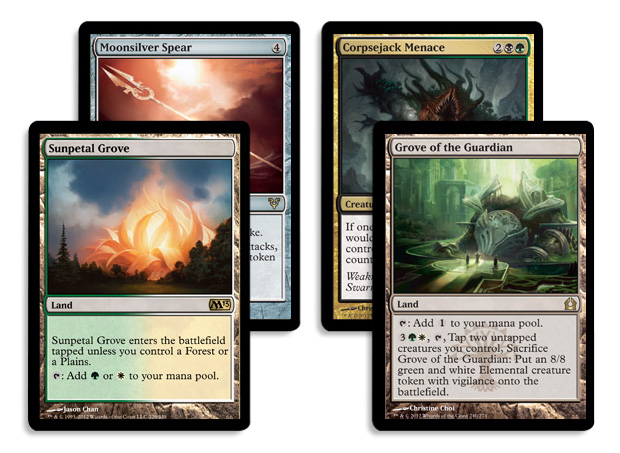 I can't think of an easier set of rares to find. The question is whether the rest of the deck could be built without more. Ghave is forgiving and gave us multiple themes to work with:

Making the most of our tokens, and getting a few along the way, helps us create a presence on the battlefield. Swarming, or sniping in with Chorus of Might, will be one path to victory. However, there isn't an abundance of +1/+1 counter effects: Blessings of Nature, Common Bond, and Travel Preparations are available. Similarly, for sacrificing creatures, Altar's Reap, Slum Reaper, and the already-accounted-for Korozda Guildmage are there. Fiend Hunter, Barter in Blood, and Tragic Slip all play into sacrifice shenanigans as well.

Does this mean we're out of picks? No. Not even close. Let's cover some usual Commander fare.

Making mana happen is a solid choice of action in Commander. Having extra mana around is nice for Ghave, Guru of Spores, so we can both use his abilities as much as possible and recast him when he gets killed. Ghost Quarter lets us ward off some of the splashy lands other players may have.

Removal is a nice feature to have on hand. Golgari Charm is one of my favorite ways to surprise opponents, and it's a feature-laden card of choice in Commander. Eaten by Spiders should help fight Equipment too.

Whether it's recursion, destruction, or just good stuff, these are all features I find useful in Commander decks. 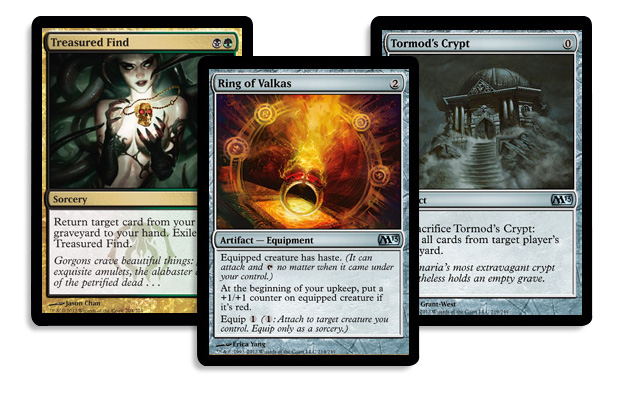 If you wanted to push an enchantment/hexproof theme further the choices are few, but all of these cards can do a lot of work for us. It's okay to have a few extra things in the deck if they happen to work well for other purposes; hexproof creatures fit the bill completely.

What is the Answer?

Through all these modules we've found 62 nonland cards that can work with our commander, and the list looks like this:

This isn't your typical Commander deck. In fact, I'm not very happy with where we ended up. I like a lot more creatures than what we found, but with enough mana we can rely on Ghave, Guru of Spores to help us through. There's plenty of removal, which should help keep the game moving slower. Our plan of attack is going to be tough since we want our commander in play all the time, but fighting the bigger guys while getting our mana going will let us explode over a turn or two.

What the deck can do isn't up for debate, but how well it works is another tale. The problem with restrictions is that they limit with absolutes what is possible. We don't have fancy Dragons and dominating Demons. We don't have battlefield-clearing spells to reset the playing field. We don't have the cards that are even better in the themes and goals we've set out.

What we do have is a coherent deck with ways to interact with opponents. We can disrupt their plans. We can break up the cards holding us back. We can wait to surge our resources when the time is right. What we didn't set out to do was maintain parity with decks without these restrictions. It's not reasonable to ask the same power and might from cards that aren't the rarer, splashier varieties.

The comparison I imagine is the difference between a machine built for mass production (the usual Commander decks one sees) and a Rube Goldberg machine (what we've created here). Given time and stability, we can engineer something marvelous. In many other games, our pieces just won't fall into place.

Can rares spice things up and help our deck perform better? Yes and no. Going back further in time will yield more commons and uncommons that help. From Magic 2012 , the previous core set: 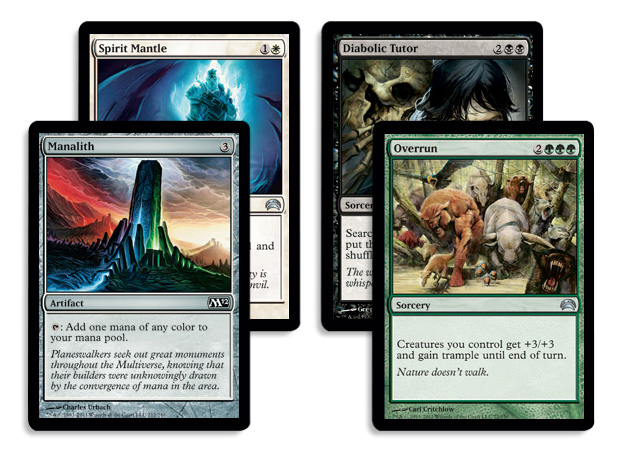 Ultimately, it's up to you and your play group to determine if decks built like today's are enough to get by, or if joining forces to find more cards and level out everyone's decks together makes more sense. We can't find the true unknown of the entire world of Commander decks, but we can build a machine to help us get there.

Join us next week when we finish what we started. See you then!