or Enchantment Week, it makes perfect sense to give you a list of the Top 10 Casual Play Enchantments. Unfortunately, my Top 20 Serious Fun cards of all time is already littered with many enchantments. Where is the suspense in doing a list that I just did only recently? Instead, I bring you something a little different. This list looks at the cards that love enchantments. These are the cards that aren't enchantments, but use enchantments to make themselves stars in kitchen-table Magic games around the world.

Enchantment/artifact destruction: Admittedly, these cards don't get better with enchantments, but they are so closely tied to the card type, it seems wrong not to at least mention them. I've included three separate cards because they all fit here, but they do different things for different decks. 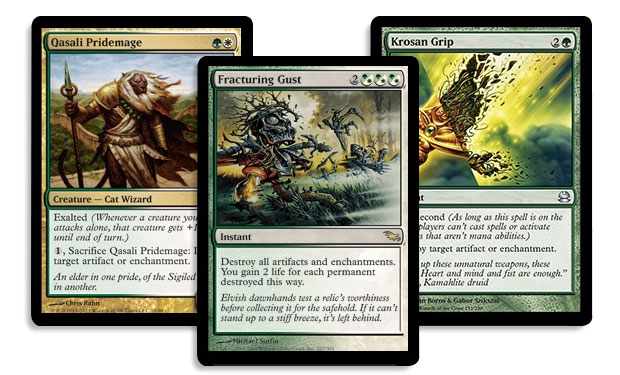 Qasali Pridemage is a solid 2/2 for two mana with exalted. The joy of the Pridemage is that it is such a utility card. Ideally, I use it to pump a single creature on an attack, while it sits there and lessens the early game attacks against me. All the while, everyone knows that when an enchantment or artifact becomes problematic for me, I have the answer ready to go. Having it out there often means other players won't even bother playing out their enchantments since they know they will just disappear.

Fracturing Gust offers the global reset. While you are only really going to want it in your deck when your metagame has plenty of targets and your deck does not, it is a handy card. I prefer to treat the lifegain as a bonus since there is an allure to holding the card and hoping for another enchantment or artifact to hit the board. I find ignoring the lifegain means that you are more likely to make the correct decision as to when to play Fracturing Gust.

Krosan Grip is an all-star. If you don't have at least four of these in your collection, I encourage you to fix that error. Many enchantments can simply use their activated abilities when you target them with removal. All you are doing is controlling when the enchantment will be used, and not if it will be used at all. Krosan Grip solves that problem. Pernicious Deed isn't nearly as scary when you have a Krosan Grip in hand.

Auratog: This is one of my favorite cards in the game. Back in "the day" I would run him with Rancor, casting Rancor and sacrificing it for the bonus, looping it as many times as I could afford to, then attack someone and put that player out of the game. The deck required careful planning, since it was vulnerable to pretty much everything and really wasn't capable of taking out more than one player in a game. I would play my lousy cards and manage to get into the final two players. One of them would attack the other and I would return the favor and steal wins I had no business getting.

This is no knock against Auratog. With a card like Rancor, Auratog was regularly a 13/14 trampler that would often come out of nowhere. When I left that group to go to law school, they gave me a t-shirt with an image of the Auratog on it and the words "Beware the Quiet Guy" stenciled underneath. He certainly doesn't belong in the Top 10, but he is a sentimental favorite. 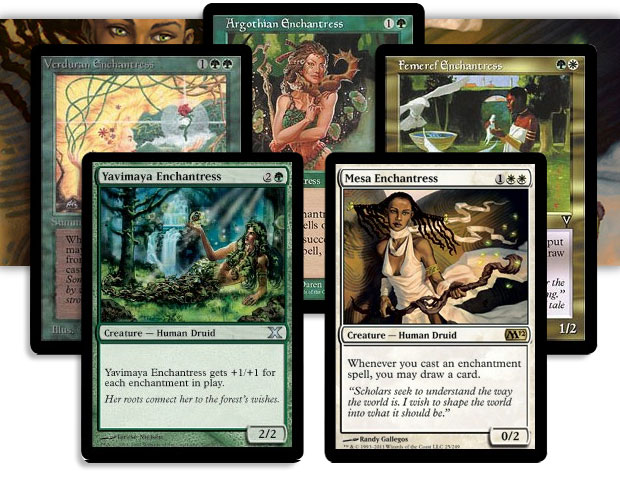 Whether they are drawing you cards or getting a power and toughness boost, the Enchantresses do all they can to encourage you to overcommit to the board. The key to these cards is understanding when to stop. You want to get into a position where control of the game is steadily going your way, all with you having enough cards in hand to quickly return to the control position if your opponents manage to wreck your board state.

This old Tempest rare has seen new life in Duel Decks: Heroes vs. Monsters. More than one person in my group has tried to make this card into a one-sided Wrath of God, wiping away all of the opponents' creatures. When the card first came out, it seemed that its primary purpose was as a skill tester. When Tempest came out, there were very few decent Auras in Magic. For the most part, if you played an Aura on a creature, you were betting that your opponent had no way to kill your creature. Most of the time, he or she did and you discovered that Auras were just a trap where your opponent would get rid of two of your cards with only one of his or hers. Running Winds of Rath tried to encourage you to put Auras on your creatures, but it was a sucker's bet.

Then Auras started getting better. Whether they saved your creatures, or came back to your hand, or they just became so good that hitting even once made the Aura worth it, playing the right Auras makes sense. Now, Winds of Rath, in the right deck, can be a game crusher.

There are still people out there who don't know the power of Zur the Enchanter. If you see Zur in any game, Commander or otherwise, simply kill him. Your opponent will beg with you to leave him alone. It isn't a broken Zur deck; it does something fun! Just take him out. Your opponent is lying.

Zur can provide you with an answer to pretty much every problem your opponents can set in front of you. There are twenty-eight cards from Theros alone that Zur can search out for you (seventeen in just Zur's colors if you are considering Commander deck-building restrictions). The particularly juicy ones include:

That's right, even Gods come when summoned by Zur! 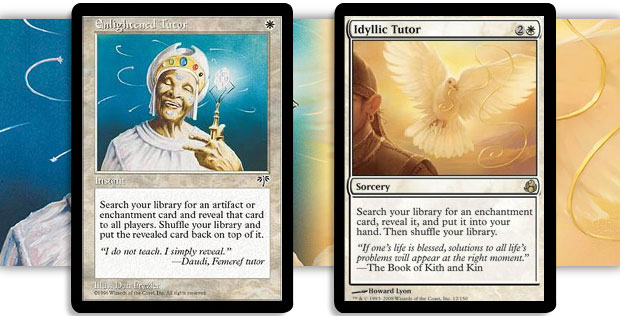 While Academy Rector puts the enchantments into play, you have to successfully cast the four-mana creature and it must die. The Tutors simply require you to cast them to get the enchantment you are looking for. Not a lot to discuss here. When you are looking for your Aura Shards, Fires of Yavimaya, or a particular Theros God, a Tutor will get you the card in the most straightforward manner available.

Not surprisingly, the Rector doesn't tend to get played unless the controller has a sacrifice outlet on the board that can be used to respond to any attempts to exile the Rector. A Tutor with a body attached is generally a positive thing.

This can be a difficult card to find, and more people than ever are looking for it now that Theros and its enchantment theme is known. The key with the Sanctum is the understanding that most of the enchantments you'll be casting are relatively cheap, so you can expect to see several of them in play early on. Any time you have the opportunity to get more than one mana from a single land in a single turn, it is bound to be a good thing for you.

When totem armor became a part of what Auras could do, they started showing up in casual decks all the time. Rather than lose both the creature and the Aura to a removal spell, with totem armor, you only lost the Aura. Creatures became more durable to both targeted and mass-removal spells. Players understood they would have to deal with either the Aura before trying to kill the creature, or they would have to use up two cards to kill off a creature.

Umbra Mystic made sure you weren't limited to just the handful of Auras with totem armor already. Instead, you could choose the best Auras available and they would do the job. Every Aura gains value when Umbra Mystic is on the battlefield, and that is very important when you are risking two cards on a single creature.

When this card first came out, it was immediately paired with Eldrazi Conscription as a way to get the expensive Aura on a creature for a reduced cost. While that is great, it can also give you everything your attacking creature might need. If your creature needs double strike, protection from creatures, trample, etc., there is likely an Aura in the deck that can give that to it.

Many of you are aware of my efforts (Part 1 and Part 2) to build adeck that revolves around Krond the Dawn-Clad. More than one person has suggested that if I really want to build a deck that features enchantments and a big, beefy, legendary creature, then I should be running Bruna. If I wasn't so determined to make the Flyin' Lion work, I would agree with them.

Bruna is far easier to cast than Krond and her ability to "go Voltron" is just so easy that it is unlikely that you'll attack with her and not be a threat to kill the opponent she is attacking. Bruna is already in the colors that have some of the best Auras in the game, particularly when it comes to protecting your creature from targeted removal. Bruna and the Simic Guildmage also give you a way to resurrect Auras from your graveyard. With Bruna bringing Auras back, the Guildmage can spread them around to your other creatures as a way to share the love.

Something to remember with the bestow cards in Theros: when a bestow card is in your hand or the graveyard, it is considered an enchantment creature, not an Aura. When Bruna attacks, you will not be able to put it into play, attached to Bruna.

Much like Bruna, Uril is a Voltron-style Commander. The difference is that Uril starts with hexproof and, as a three-color commander, offers more Aura options for Commander players when deciding what Auras to include. I have been lucky in that Uril has not been a big part of my group's metagame. However, the allure of building a huge monster will draw someone to play him in the not-too-distant future, I'm sure.1

Before I go, I thought I would give you a rough decklist that includes many of the cards in this Top 10, as well as a few other ideas. I hope you'll take these ideas and make them your own.

The Misery of Alabaster Light

Great Auras and great creatures with a splash of recursion. Enjoy!

1: And by "someone" I mean me. I'm a complete sucker for a build-your-own-fatty commander. (return) 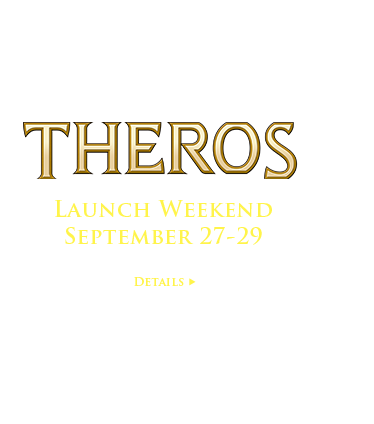