he glinting light that scattered across the razor grass was a welcome sign to Arniss. The heavy footfalls trailing behind were a solemn reminder of how vulnerable they still were—though the danger, finally, seemed far behind. It was a bit shy of ten days ago that they had set out for Bladehold—barely visible on the horizon—with all the haste their wounded could afford.

A cold cry drew attention to the rear.

Garrant, a tall and proud citizen, had splayed the words awkwardly. He, like many others, was deeply unnerved by all that was going on. Arniss raised his fist, silently commanding the troupe to hold.

Turning back, he walked to the man in Garrant's arms. "How long has he been like this?" 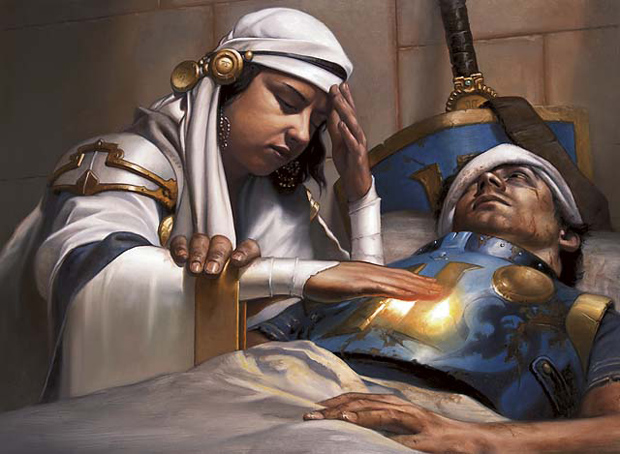 "You know him?" Arniss asked. The somber nod and welling of tears said all Arniss needed to know. "If not for our own sake but for his, you know what must be done."

Garrant, fighting for stoicism, nodded again and waved for another to carry. Brother or son, mother or wife, it mattered not who—all touched by the black ichor became changed. Flesh becomes twisted, darkened, deadened into the same blackness that tears into the land itself.

There was only one way to help those touched escape that fate.

The reliever carried the sickly lump away from the group. Once the distance was enough to shield the eyes of the squeamish, Arniss drew his sword. In two fast motions, misery and agony had been relieved. That glint of black-and-blood-spattered metal took Arniss back to the day before.

"Fall back!" was Arniss's first command. Whether the two dozen or so locals that had rallied to him would understand and react was a serious concern for the paladin. "Get to the wall!" was all Arniss could shout as he, too, fell back. The chaotic movements, unfiltered from the initial shock and fear, slowed the disorganized men down. 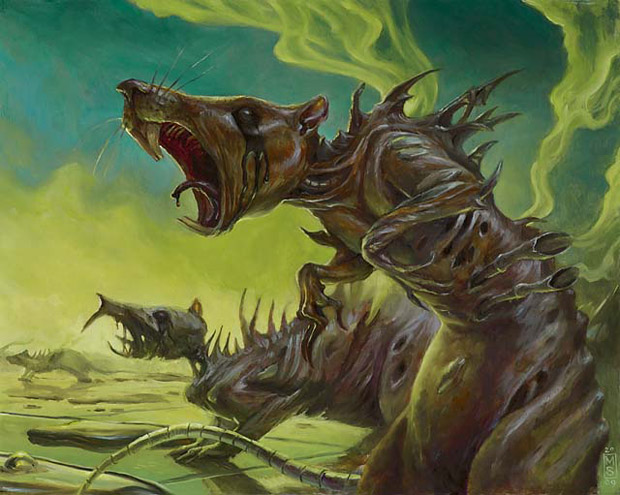 A few of those caught, exposed by their forerunner's hesitations, paid the price in blood, and a spray of oily darkness into their wounds, across their backs. Fortunately flashes of polished edges struck back, driving the attackers away. In the first truly coordinated effort of the day the volunteers, now properly defensibly positioned, slashed out and kept the buzzing things at bay.

Arniss, his sword already dripping with black residue, feverishly worked his way down the wall. Jostling, encouraging, and demonstrating his prowess: all his efforts were to bolster the emerging bravery around him. Within a few moments, a steady rhythm had fallen over the group.

The twisted, blackened things did not understand the change occurring as they streamed in.

With a pitch and clarity belying his age, the voice of Arniss reached out along the fortification. The air seemed to hum, curling about the defenders. Though a distant memory or forgotten tune for many of the men, they too began to add their voices to the song; a resonance of words and blades became a dual note.

As the tempo changed so did the speed of the swords: one-two, one-two! Each blow was worked a second time. Each hit scored only served to invigorate. The attackers, hideous echoes of what they once were, were being struck down with impunity. Surprise and fear were no longer lingering in their favor. Those behind the wall who had ran away moments ago, now rushed out, still in an odd concert, striking down the grotesque bodies with ease.

A call from the line drew Arniss out from his memories. He had been to the Mephidross. He had fought the bloodlust and cruelty of vampires. He had held ground against the savage, desperate Moriok. But this was something different. 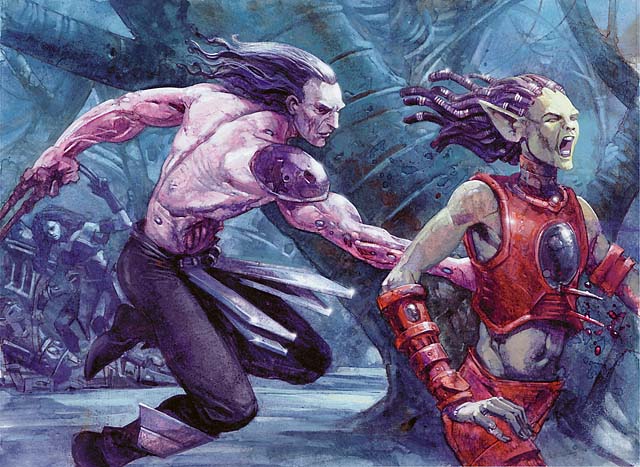 Insidious. Dangerous. Anathema to the natural that he knew.

Arniss quickly took point again and set forward. Bladehold would have answers or, at the very least, would hear his questions. He took assurance in his teachings; though body may fail (He had seen for himself!) the conviction of his people would hold.

It simply had to: there was no other choice.

If you missed last week's previews from PAX, Pro Tour–Amsterdam, and a whole boatload of columns, blogs, and sites never fear: the visual spoiler will catch you up to speed. In fact, you might want to take a quick look before I move forward: I have a penchant for plugging in the latest and greatest as soon as I can.

But before I get ahead of myself let me share what your itchy click finger is hovering for: today's preview. 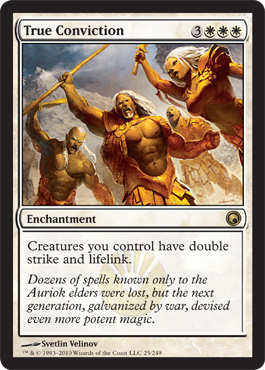 True Conviction isn't as potentially convoluted as last week's critter, but is just as inspiring—at least for me. It does exactly what it means to do: take names and stomp doors.

It doesn't do this outright, per se, but it's the kind of enchantment that makes something as small and unassuming as a Stormfront Pegasus and turns it into a life-gaining, damage-dealing machine. And it gets worse better from there.

Never the Solution but Always an Answer

I like decks packed to the brim with small, white creatures. "White Weenie" is a classic deck type that I've mentioned once (Knights, Version 1 and Version 2 decks), or twice (Higher and Higher deck), or thrice (Glory in Battle deck), or probably another time or two (Allied Crusade deck). What can I say? I like running out the little weenies. 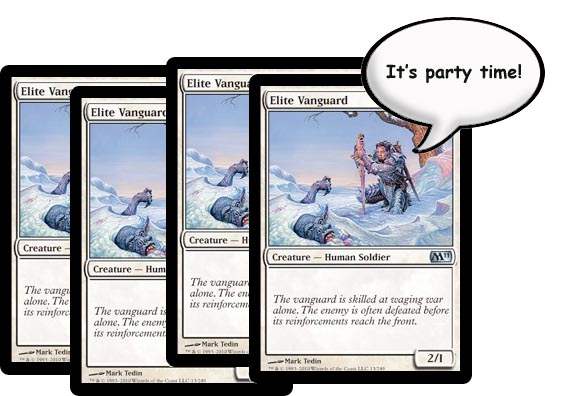 And I'm not alone: white weenie even recently won an event that's kind of a big deal (Pro Tour–Amsterdam) and newer little ones, and the things that help them, are always something to look forward to when new sets come out. Sometimes it's an Elspeth (both the Shards of Alara Knight-Errant or the PAX previewed Scars of Mirrodin Tirel versions). Other times it's like Honor of the Pure from Magic 2010.

True Conviction is like equipping your creatures with an atomic bomb of awesomeness.

4 Honor of the Pure 4 True Conviction

It slices! It dices! It chops, hacks, and cuts! While there are certainly a lot more white creatures that qualify as "weenie" class, I picked the Knight tribe, which recently gained a lord in Knight Exemplar, to work with. Between Knight of the White Orchid and Armillary Sphere there should be no problem hitting six lands—which also works well with Emeria, the Sky Ruin.

Honor of the Pure and Kabira Vindicator serve as boosts to make our Knights hit a bit harder and nothing much needs to be said about Knight Exemplar. However it's True Conviction that should give your opponent a jump. As with Kinsbaile Cavalier before it, giving double strike to your creatures is a two-part recipe:

It's a simple system. 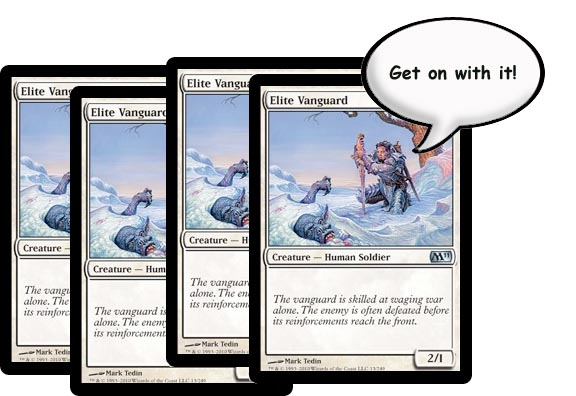 But what makes True Conviction stand out is the other keyword that is attached: lifelink. If you happen to find yourself "racing" your opponent—trying to deal more damage and kill them before they take the last of your life points—this provides an almost assuredly stable platform to run with. Double strike means that lifelink is more like double-lifelink as you'll gain life during both first strike and regular combat damage steps.

If you weren't counting at home, that's a lot of life.

This Is My Boomstick

While I have an inexplicable attraction to Knights as a whole there is another fascination that occupies my time that many of you share an appreciation for as well: EDH. I've talked about my Rhys the Redeemed deck before and many of you asked for a deck list. Here's a hypothetical version, once I get my hands on some Scars of Mirrodin. 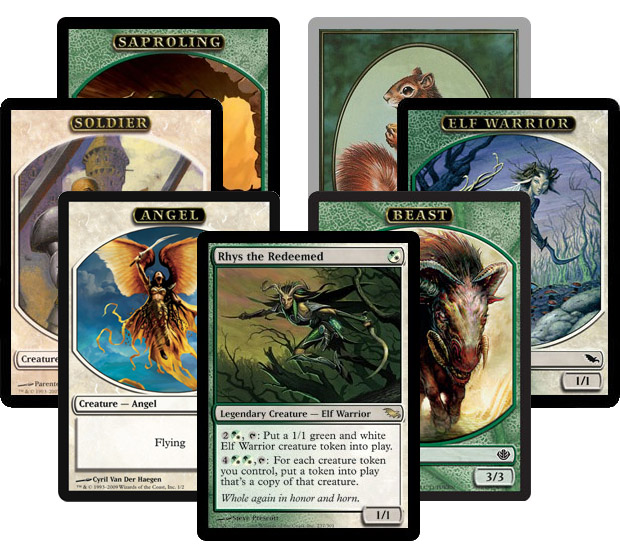 While this deck definitely tilts towards the "doing some seriously powerful stuff" vein of playing, True Conviction is one enchantment I'm really looking forward to shoehorning in. Any deck that can create a mass of creatures stands to benefit from a powerful buff to their massed army: Eldrazi Monument, Akroma's Memorial, and Ajani Goldmane all make a smattering of tokens become much more fearsome. True Conviction is downright flabbergasting.

While applying True Conviction to decks that want an aggressive combat boost is certainly fine and dandy, there do happen to be a few other cards that like the other keyword: lifelink.

Felidar Sovereign and Test of Endurance are both "have X life, you win the game" cards. Felidar is a steady attacker and win condition rolled into one, with True Conviction making the Cat Beast get you there twice as fast. Test of Endurance is a mainstay of decks built to gain life: using creatures to build the total higher makes sense.

Rune-Tail, Kitsune Ascendant is another "have X life, get something awesome" card. While "win the game" is always an eye-catching phrase, the not so subtle "Prevent all damage that would be dealt to creatures you control." is certainly appealing in its own way. With True Conviction and the creatures you used to flip Rune-Tail, Kitsune Ascendant, combat should be your favorite phase for the rest of the game.

Necropotence (and its cousin Yawgmoth's Bargain) is a strange one to bring up here. While casting both (Necropotence and True Conviction) cards requires access to both triple-white and triple-black mana, the modern times in Magic have presented us with just such cards that make it possible. With just a few creatures swinging and bringing the life, Necropotence will gladly refill your hand. Spooky stuff.

Searing Meditation is an enchantment I used to fear. A friend used to play with a nifty little life-gain deck, playing such noble creatures as Venerable Monk and Temple Acolyte, and paid for the trigger. Every time. Gaining life was a solid way to resist dying to the damage I could deal and, over a long enough game, Searing Meditation would whittle my offensive force away. Getting twice the triggers every combat step looks exciting for any deck running this.

I'm sure there are many more interesting things to be done with our new, friendly neighborhood enchantment. Let me know how you plan to show your True Conviction on the forums. Join me next week when I get to dump a ton of stuff on you!