hen Mirrodin first arrived I was pretty awestruck. A bountiful abundance of artifacts, many with unique and interesting effects, occupied my mind like no other set had yet. While some of these ideas turned out to be a bit more than bargained for, in the shadow of affinity was imprint doing its own thing and not bothering anyone. 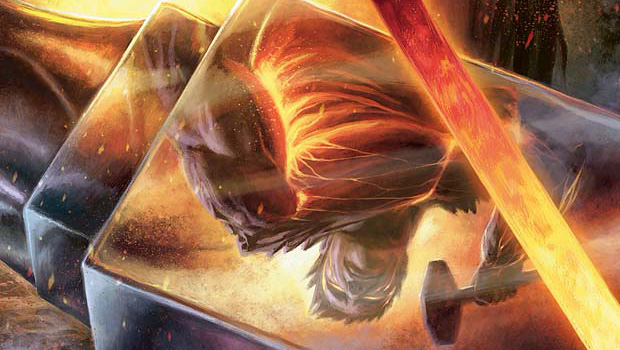 Jumping forward to the present we have returned to Mirrodin in Scars of Mirrodin, bringing with it both new (metalcraft and infect) and old, like imprint. Between all of the original Mirrodin block and Scars of Mirrodin there are just eighteen cards with imprint, but that's more than enough for Imprint Week this week.

It's Me Again, Margaret

I touched a bit on imprint right around the Scars of Mirrodin release and shared some silliness built around Prototype Portal, a new take on another favorite of mine: Soul Foundry. However, there's a lot more to imprint than just my personal favorites. Let's take a trip down a few more choice hits and see what else is lurking with the artifacts that exile for fun. 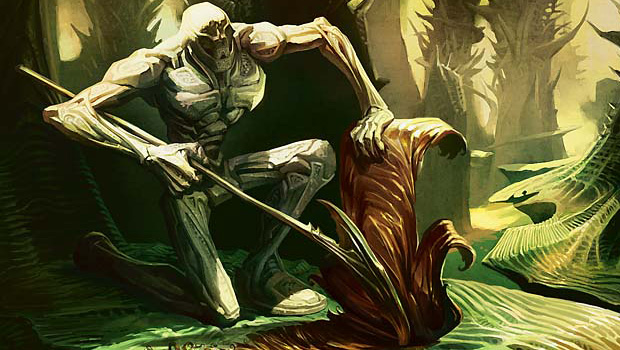 The first in imprint highlight is an epic piece of equipment: Strata Scythe. If you happened to have been lucky enough to find this (or unlucky enough to face it) in a Sealed pool then you're already familiar with just how quick this thing can make a creature Hulk out.

The most obvious way to leverage the Scythe is to just dump it into any deck based around just one color, preferably a color that wants to make creatures bigger. And we all know what big creatures are good for: attacking. Since we're being a little sentimental let's try another throwback theme that works with creatures who want to attack: shadow.


Sometimes I'm not in the mood to mess around with the biggest creatures out there. Sometimes a quick game is all it takes. This is the kind of deck that delivers on both.

Creatures with shadow simply ignore whatever defensive opposition happens to be laid out (except, of course, if the defense is also shadow) and slam through on attack. And if you follow that then you'll see that works both ways when all your creatures have shadow. Attrition teams up with Nether Traitor (and, well, any other creatures you happen to have handy to throw away) to knock out the baddies coming your way.

And Strata Scythe will ensure that the damage is massive.

Wait, wait. Shadow creatures and Strata Scythe certainly get the damage through, but a deck of aggressive creatures can benefit from other (slightly cheaper) equipment. Where Strata Scythereally belongs is in a deck with lots of lands—lots and lots of the same land. And there's only one land that's up for that job. 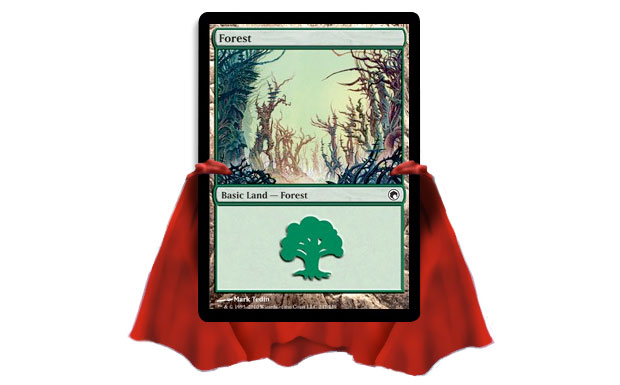 Forest to the rescue!


Now this is where the action is at. Perhaps it isn't as aggressive as the shadow deck above, at least initially, but a whole lot of land-get will get there. Elvish Pioneer will start things off quick but Veteran Explorer is an innocuous little guy you might be able to get someone to knock off for you. Yavimaya Elder and the duo of Kodama's Reach and Cultivate will ensure the lands never cease to flow.

The mass of Forests will certainly allow you to supercharge the scythe but the real trick is that you can switch to regular old big guy mode by plying Primeval Titan—another land grabber—and the massing swarm of Beast tokens thanks to fellow mythic rare Rampaging Baloths. And if you are looking at an empty battlefield Genesis Wave is a one-shot reload to keep the party going, which should be a pretty big party all things mana considered.

This Is the Beginning of the Song

Strata Scythe is pretty close to being my favorite new card from Scars of Mirrodin. Another close competitor is Prototype Portal. But I already worked out some interesting things to do with that. Instead let's take a look at Clone Shell. 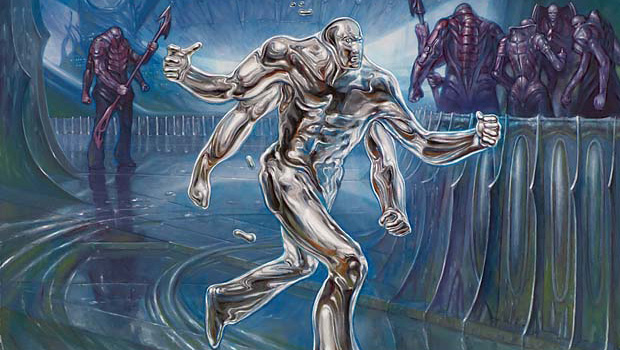 What if I said we already solved this issue? Remember the Quest for Ula's Temple deck we put together before U.S. Nationals?


This little deck is a surprising source of consistency in multiplayer games. But my fellow players are onto the trick of zapping the quest as soon as possible—they've already learned that I don't have any way to get it back from the graveyard. 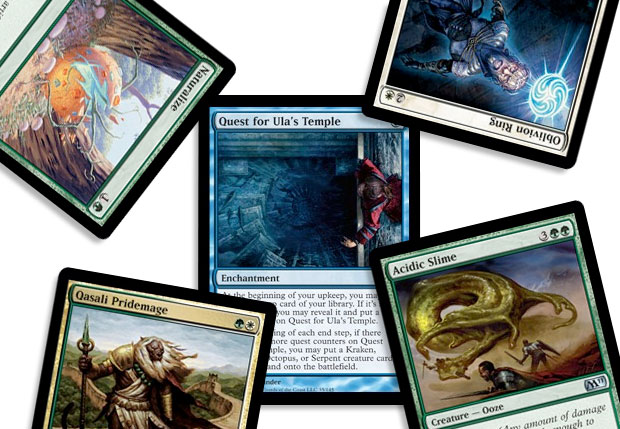 But since I'm already stacking the top few cards of my deck, thanks to Brainstorm and Crystal Ball, Clone Shell is another way to take advantage of it. And if I'm changing the deck, I think there's room for a few other surprises along the way too.


Messing with a deck that's working well is always tricky business—if it works why "fix" it? For starters: cramming more cool stuff in there. Many of the same pieces in the second version are still there in the third, like big Leviathans and some scrying, but additional tweaks help it do quite a bit more.

The biggest addition is the team of Clone Shell and Culling Dais: drop the Shell and imprint a creature of the sea, then sacrifice the Shell to the Dais. Get a Leviathan and draw a card later, smile immediately. Since I usually drop this down for multiplayer madness, two other cards get a chance to shine: Propaganda helps buy some time to get a Quest active or set up a Shell, and Mimic Vat is one of those beautiful cards for when creatures are coming and going all the time—like 8/8 islandwalking Leviathans that no one else seems to like. 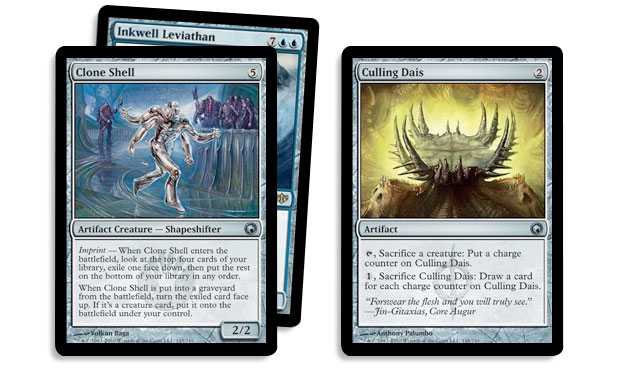 And if I suspect right, resident combo constructor Jacob Van Lunen will have some more treats with Mimic Vat Thursday. Suffice to say, Mimic Vat's potential shenanigan level increases exponentially for each player in a game.

While we're looking at things that have already been done I'd like to break my promise and go back to Soul Foundry because I'd also like to combine it with the recent Zendikar and Worldwake creature type Ally. What can this imprint-carrying artifact do?


There's a lot of room to tweak and change things up here, but showing off a bit of concentrated action works best when piled high. The combination of blue and green Ally creatures gives us card draw, mana, Wolf tokens, and flying among other things.

The real jazz is when Soul Foundry (and Mimic Vat—have I mentioned that card is amazing fun?) gets fired up into high gear. Want a Turntimber Ranger every turn? How about a Jwari Shapeshifter with a selection of choices in play? Snagging a Sea Gate Loremaster lets us draw a bunch of cards quick, and just bumping it into play nets us all the Ally triggers we can handle.

There are a few more interesting pieces of imprint that are worth a second look, or your first if they're new to you:

Recently struck with the foil treatment in From the Vault: Relics, Isochron Scepter gives instants a little more pizzazz. While Counterspell and Orim's Chant have been features in some of the decks I've seen, there are other cards that can be slotted in to create some entertainment:

I'm sure you can find dozens more to choose from!

Mana is always a handy thing to have. When you can make more of the mana you need most you're going to be happy. Extraplanar Lens does exactly that: taking one of your lands to increase all the mana those lands can make.

While basic lands are the most handy for having a lot of land with the same name, just as with Strata Scythe, Vesuva can also be used to copy a land that has the same name as the imprinted land: Copying awesome lands like Reflecting Pool or Cloudpost can certainly join in the action.

I've sung praises on Mimic Vat already and the original from Mirrodin is still one of my favorites. While Duplicant doesn't get us an exact copy of a creature we also don't have to wait around for the one we want to fall over and die. Whether we're using our own or seeing others big guys, Duplicant gets to be one too.

Despite appearing on relatively few cards there is so much to imprint that I can't possibly begin to cover all of the fascinating options for all the cards. That's where you come in. There just happens to be this little content for decks running through the end of the year. Here are the rules if you need a refresher:

There are many more imprint cards that can be used in creative ways: Semblance Anvil, Spellbinder, Panoptic Mirror, and Summoner's Egg all feature very unique ways to do some things. I hope this trip through imprint has some deck ideas budding—and the contest will give you a place to put them. 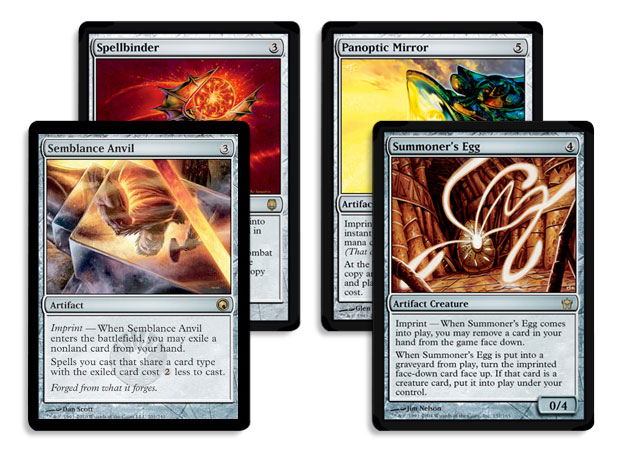 Join me next week when I unseal a multiplayer deck!