he principle of equitable justice applied to everyone is a common motivating factor for the color white. It's often the shining example to stand in contrast to its opposing colors red and black. Red's impulsive, abide-by-no-rule-but-my-own nature chafes with white's orderly cultural structure. Black's self-serving and individualistic nature rides against white's egalitarian goals.

But none of that is particularly new or interesting—it's all part of the hallmarks of our experiences with white. What is interesting is when white takes form like a villain. I'm not talking about grabbing a white-based deck for some Archenemy fun but actual adversarial "evil" white, such as the era of "holy" zealots who terrorized the true mages of Dominaria during the time after the Golgothian Sylex was detonated. I find the desire to see true white villains grow with every Elspeth and Gideon and Ajani that is revealed.

You see, white means more than powerful planeswalkers and many of the heroes of Magic novels to me: it's a trip down memory lane into the era where Balance and Land Tax lived, the most efficient creature was a 2/1 Summon Lion for just

, and the game destroying power of Wrath of God and Armageddon working in concert was a common occurrence (especially with Land Tax to join in the fun). White has effects that clearly are meant to hit equally, but the actual impact of such effects are certainly not always equal.

And in some ways it makes more sense being "balanced" off-balance. Law strives for equity but treats crimes and criminals differently—one punishment doesn't fit all. Governments don't function as if they are a person, but an overruling entity. Those setting the rules don't normally set rules that really get in the way of what they like—and make a concerted effort to have the laws that do apply treat them a little differently.

You might argue that it's a hint of self-serving black that's actually making things feel this way. But you don't need any black, or red, or any other color, for white to be .

Angelic Arbiter is, at a quick glance, reminiscent of Silent Arbiter—stymieing the move and flow of combat. But our angelic friend here does so much more for us. Let's run down exactly what we have cooking in this high-flying pot.

Sitting firmly in the driver's seat, our arbiter from above feels more like a scheme card than benevolent angel. She's actually really sharp: her ability to shut down either attacking or spell casting is always on during opponent's turns (and doesn't do anything during yours). If you manage to drop her onto the battlefield outside of your turn she'll know what the opponent has done up to that point—a handy feature with tricks like Scout's Warning and Vedalken Orrery. As long as the opponent swings with at least one dude they'll be locked out of spells (and vice versa with casting and combat). 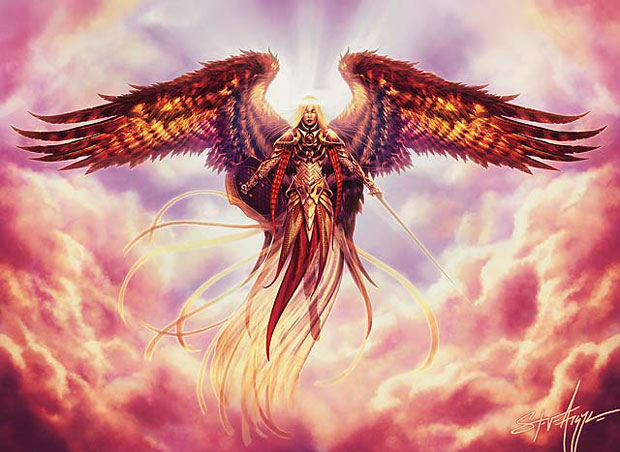 It also needs to be said that if she were to somehow go away during an opponent's turn her fair and balanced abilities stop working, and the handcuffs drop away. "Fair and balanced?" you ask? "Surely you can't say that effects that affect only your opponents are fair and balanced!"

Oh, but I am. I think it's decidedly fair and balanced. When you're representing the side of law and order in the chaotic and random world of Magic players you have the right to take a side: yours. Especially when you pile up the paddy wagon with a few of your law-enforcing friends:

Some EDH decks have generals picked for color or function—here the function is simply an extension of the flavor of setting the laws. And with nearly every highlight from across the whole Magic angelic host, your law and order decrees will not go unnoticed.

Others have too many lands? Weed out the game-breaking offenders with Ghost Quarter and friends, or play catch-up with Land Tax and Expedition Map. Too many creatures running amok? The swift and sweeping justice of Wrath of God and Day of Judgment level the field. Artifacts or enchantments got things bogged down? Austere Command and Planar Cleansing scour the battlefield clean. Somebody playing the "cast way too many spells every turn" gig? Rule of Law puts everyone down to the respectable peg of only once each turn.

Thanks to the recent updates to the EDH banned list, Painter's Servant is no longer kosher, meaning the game deflating insta-lock combination with Iona is no longer a gorilla in the room. She's still a tough girl to be sure—locking a color down is always a hefty judgment to levy—but without the silly color saturating trick she's lost some of the instantaneous "must kill Iona's controller" reactions that abound.

If you want to get more "forward thinking" try spicing things up with Magic 2011—a newcomer like Sun Titan, and a few other adjustments to include a few more converted mana cost of three or less potential targets, feels just right in the deep pool of EDH. However, with a little more work you could completely shift the focus from pulling together a singleton monstrosity and instead build with the most recent tools available: anything Standard legal.

3 Honor of the Pure 2 Oblivion Ring

4 Ranger of Eos 2 Day of Judgment

2 Emeria, the Sky Ruin 3 Angelic Arbiter 4 Ranger of Eos 4 Student of Warfare 3 Honor of the Pure

While there are certainly many different ways to go about making a white weenie type deck with the new Standard after Magic 2011 comes out, this is the way I would go considering I play quite a bit of multiplayer. With the not-so-subtle life gain of Kabira Crossroads and Lone Missionary (and the new Ajani's Pridemate not minding the up ticks one bit) you'll find plenty of time to get things going. Ranger of Eos plays the part of snatching up reinforcements while Honor of the Pure ensures everything will hit harder. 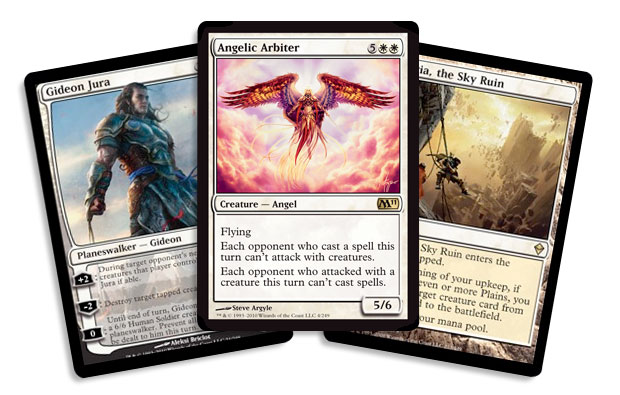 Between the "make everyone swing at me" masochistic tendencies of Gideon Jura and the "choose wisely" decision required by Angelic Arbiter you'll be running the ebb and flow of the table in no time. Emeria, the Sky Ruin gives some long-game reach (a nice perk for any deck planning on multiplayer antics), and Day of Judgment is an always comforting reset button for emergencies.

Last week the Magic 2011 visual spoiler was fired up with an all-time high of initial cards. If you're like me (which you may consider a good thing or a bad thing, I'm not really sure) you jumped at the chance to see what's coming down the pike.

As an avid lover of the cube I was really tickled to see some awesome things that will almost certainly find their spot among my collections of hand-picked commons: 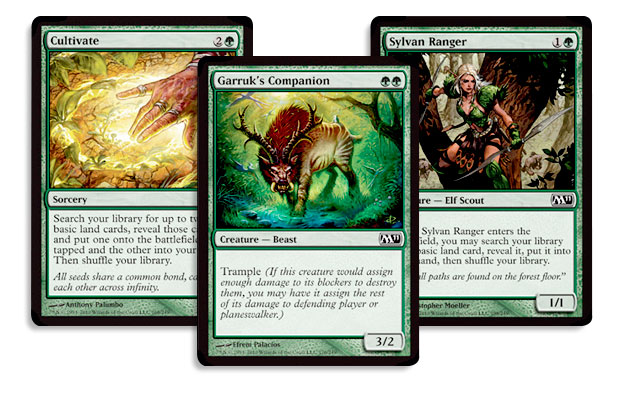 If there's ever a time to love green, getting some seriously solid mana ramping (with almost exact replicas of Kodama's Reach and Sakura-Tribe Elder) with a touch of cheap meat (take THAT Elvish Warrior!) is the time. 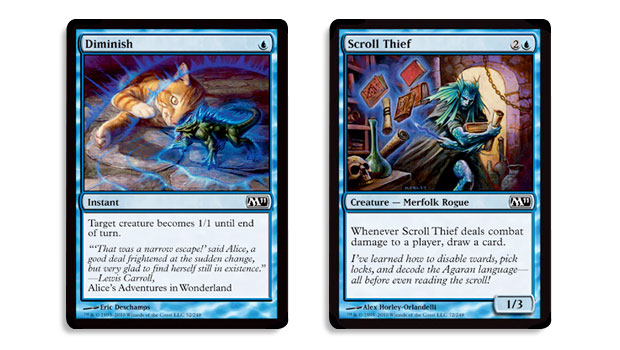 While the return of Mana Leak is stealing all the headlines, it's the "wonderful in creature-heavy Limited" cards that have caught my eye (and, well, Mana Leak is already an illustrious member of the "counter club" in my cube). One of my favorite cards of all time is Fowl Play (which probably explains why I also enjoy such hits as Humble and Humility) and Diminish delivers a very similar effect. Also, while it's not Thieving Magpie the decidedly devious Scroll Thief brings a smile to everyone to who loves to draw cards.

Of course there's a lot more going on then just awesome commons: if you play Type 4 or Stack then there's a bevy of goodness heading your way: 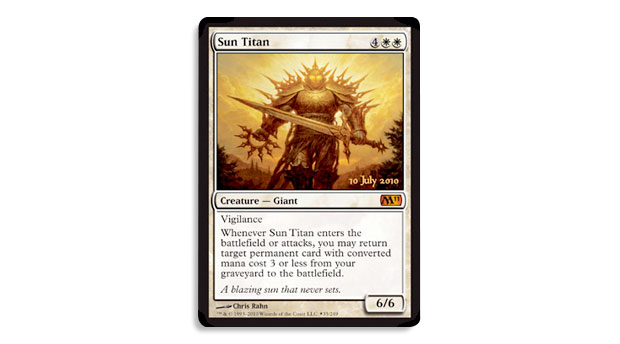 Receive this promotional Sun Titan at a prerelease near you. (While supplies last)

Big. Bold. Gets back a dude for free. Epic—enough already said. But it looks like he has some brothers in ... 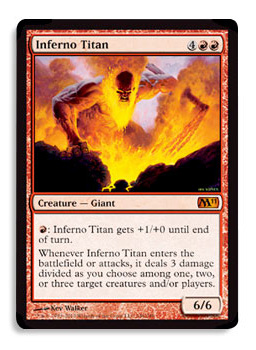 Just when you thought it was safe to have some fragile dudes around—whammy! It's like a Keldon Champion meets Arc Lightning meets Mr. Grumpy. I can't wait to rip him off the top and unleash a world of hurting—or, more likely, have him less pleasantly hit the table under my opponent's control. 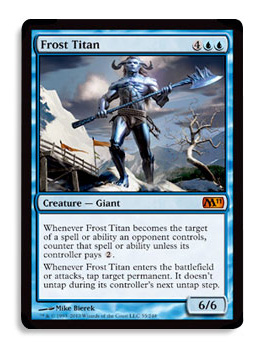 The freezing counterpart to my beloved burning giant is no slouch either. Shrugging off some targeted effects and temporarily hindering an opponent's creature for a turn are handy tricks as well! 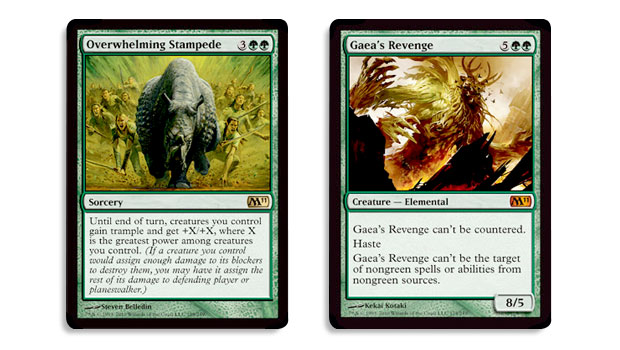 And in terms of truly overwhelming power, yesterday's cute little Gaea's Revenge would make a wonderful date for Overwhelming Stampede. In the words of a certain stompy character from far outside of Magic: "It's clobbering time!"

I'm always looking for what you guys think—sound off in the forums, via email, or catch me on Twitter (via @the_stybs) and tell me what has you fired up for the Magic 2011 Prerelease Events July 10 and 11! I can promise that there are many more surprises in store for you ahead. Join me next week when the tides have turned completely with a storm brewing on the horizon. See you then!