f you didn't catch yesterday's introduction, this week is Metalcraft Week! Hammering and tempering the variety of ways to lace artifacts—at least three under your control at the same time—into all sorts of awesome things is what this week is mostly about.

While there are certainly artifact cards ahead, there is much more to metalcraft than just the twenty-two cards with the ability keyword: metalcraft is a deck-building challenge.

Metalcraft is to Scars of Mirrodin as affinity is to Mirrodin: it gives you a reason to play lots of artifacts. In fact it isn't a reason but a demand; whether it's the original champion of affinity—Broodstar—or modern Limited players like Rusted Relic, these two abilities truly require artifacts to be exciting. 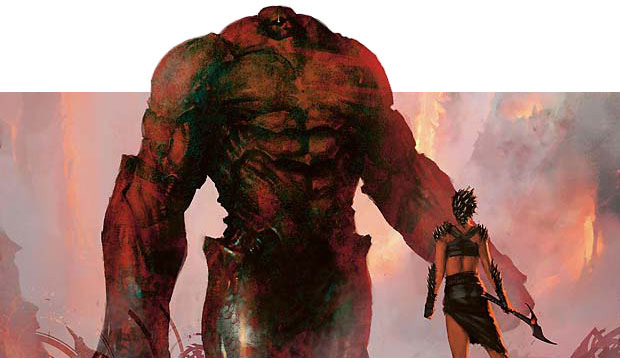 Of course, I'm excited just fine by individual artifacts alone but I'll come back to this later.

If you had a chance to dive into things with a draft or sealed deck run at one of the Prerelease Events or Launch parties then you've most likely already tasted the tangy deliciousness of metalcraft yourself. There's little reason to ignore metalcraft when you happen to be opening a ton of artifacts anyway. 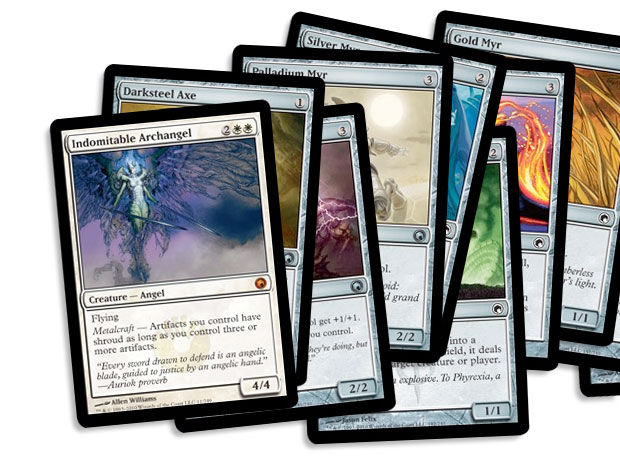 But what if we were to go farther? What if instead of just looking at metalcraft and the three artifacts it wants, let's ask ourselves: How far can we go? What if we went all the way?

I'm talking about a totally "crafted of metal" deck. Machines of war. Trinkets and baubles of power. The greatest weapons ever forged. And adorable little Myr roaming about. I want all of it.

When I saw Jacob Van Lunen's 'Myr Concept' deck from his article "Get Myrked!" a few weeks ago, something in my brain lit up. Myr. Lots of Myr. Lots of Myr all the time. It sounded like a plan to me. While I'm sure there are a lot of different takes on Myr decks I went with my gut and plowed ahead, after borrowing Jacob's mana-base of course.

Perilous Myr and Darksteel Myr present interesting challenges to most opponents, challenges that get more complicated when Myr Galvanizer shows up. Myr Reservoir and Palladium Myr provide some turbo-charged mana (and potential combo shenanigans), which will help Myr Battlesphere fire off easily.

Myr Propagator helps feed the Battlesphere and provides a way to build up for a Tempered Steel alpha strike. As I usually find a way for all my decks, I throw in the three "Sword of" swords to ensure that if color protection is required I can always grab the one I want thanks to Enlightened Tutor.

For further fun resulting from throwing together purely artifact-based decks, I decided to descend into the world of Singleton Magic: everything other than basic lands is restricted to just one copy. Surely there had to be enough artifacts to put together a neat deck, right?

The answer is yes. In fact there are so many options available I finally decided to follow through and make one of the most popular type of singleton decks: EDH. My general, of course, would be Karn, Silver Golem. 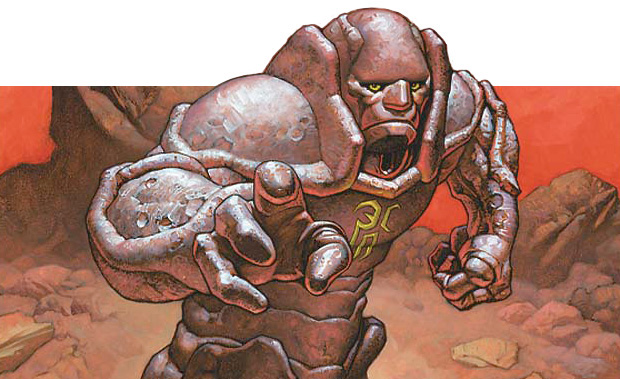 Building a big, colorless, singleton deck is something I've been toying with for quite awhile so, luckily, I had a bunch of things already laying around. This is what I ended up with:

Ninety-nine unique cards and Karn: it's a truly epic conglomeration. While new faces like Steel Overseer and Etched Champion are featured well, and Mirrodin favorites like Blinkmoth Urn and Duplicant make a showing, it's the more eccentric of my picks that has me excited: 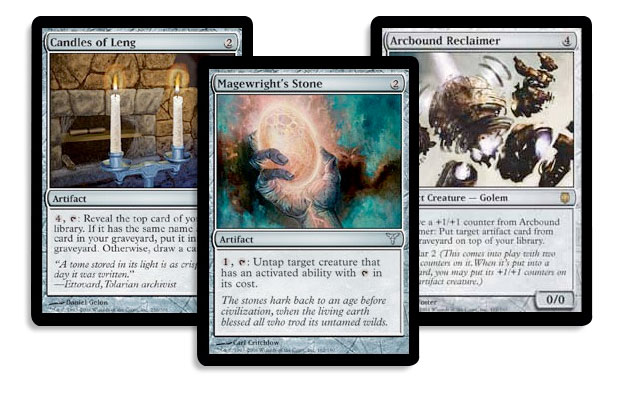 While I could spend a lot of time digging through every card to figure out if I could change anything else up front, I instead like to give things a try and see how it works first: a trial by fire with a few friends. There's nothing quite like the reaction friends give when you sit down and say "Hey guys! I just built a new deck!"

Yes, you're reading that right. Brendan just happened to already have a colorless EDH deck so he set about fishing it up for our game. Double the colorless, double the fun—or something like that. 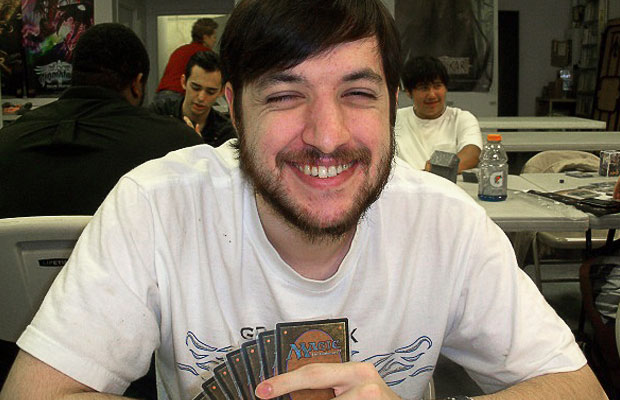 James was someone I had seen around but never really played any games with. I wasn't sure what was in his Lyzolda deck since I hadn't seen it before. It was the second deck that I wasn't going to have much knowledge about. 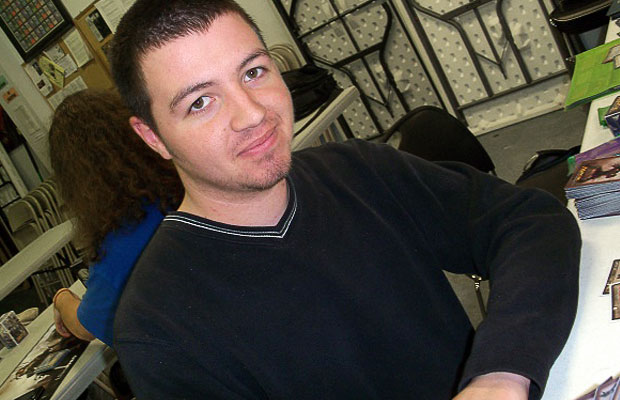 Troy was one of the first people to show me EDH and his Treva deck is full of interesting and strong cards, as well as wacky and "Oh, cool!" type effects. It's one of the most balanced decks I've seen and I always love playing against it. 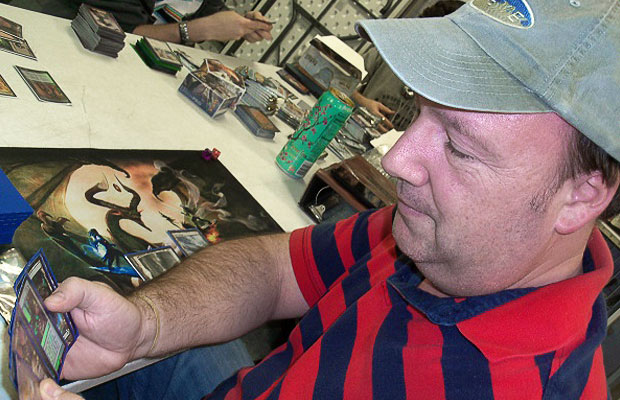 Deep thoughts with Troy and Treva.

While most first turns are a little slow and empty in EDH I had some incredible action in my opening hand: Ancient Tomb, Mind Stone, and Expedition Map. All three dropped onto the battlefield for me. And while everyone continued to drop a random thing here or there I had managed to mass quite the board by turn three! 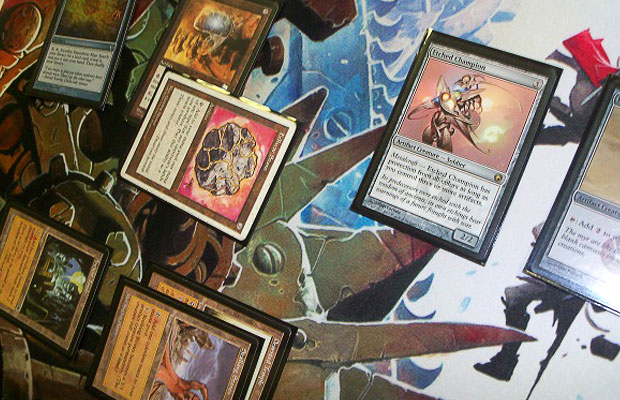 Yeah. It was pretty nice.

What made much of the following turns so solid what that Troy played Horn of Greed on his third turn, giving everyone with land an extra card draw every turn. He followed it on this fourth turn with Privileged Position.

My turn was no less provocative: I played my land for the turn and drew Mana Vault which I used to power out and equip Loxodon Warhammer on my Etched Champion and promptly took a bite out of Brendan. He didn't mind much as his Sun Droplet promised he'd get the life back. Despite that, I refilled my hearts after taking a pounding from using Ancient Tomb. 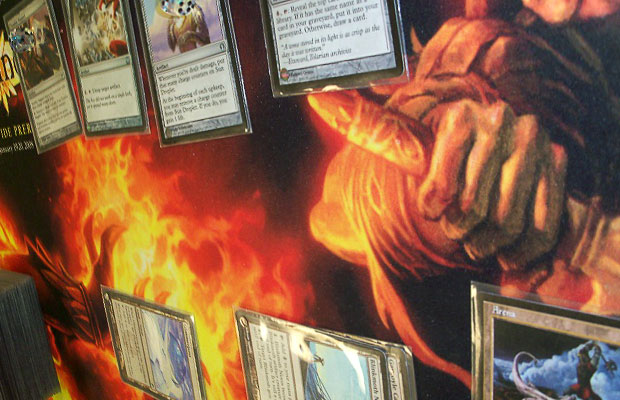 Different but still the same.

We continued to wheel out the good stuff, Troy leading the way with his flying Dragon general Treva, the Renewer. My sixth turn found me with a full board that looked like this: 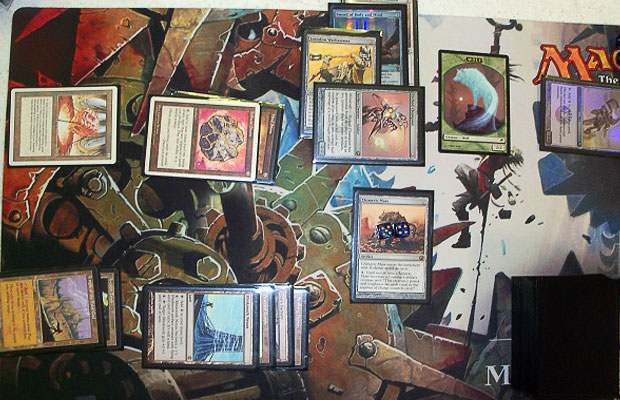 The board of all things crazy.

Since it's hard to tell just from looking, there were nine charge counters on Chimeric Mass. And I had equipped Sword of Light and Shadow to Etched Champion that turn as well. Troy, however, used a Pollen Lullaby to keep me off the extra life and creature recursion.

Brendan plopped down a Wurmcoil Engine to match his Nemesis Mask before Troy cast a Beacon of Creation to rocket up to 72 life. It started to look like it was going to be a long game, except that Troy put an Armadillo Cloak onto Treva and smacked me for even more life but put me at the very dangerous total of 14 General damage. He promised to not kill me if I stopped attacking him. Without a real alternative I agreed (and crossed my fingers that I'd find my Steel Hellkite soon).

With Troy off limits and Brendan being untouchable with Wurmcoil chilling in the way, I turned my attention to James. After dropping a Gemini Engine I sent in my triple-equipped Etched Champion. Without missing a beat James played Grab the Reins on Gemini Engine, sacrificed his Homura, Human Ascendent to Viscera Seer, and pumped the Engine by one to force the trade with my Champion. 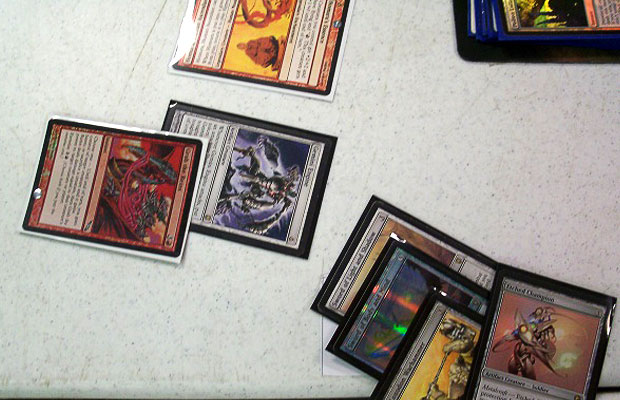 I get my Champion back thanks to Sword of Light and Shadow and replay it before letting Brendan have his turn. Without the faintest sense of falsehood he asked me "Do you want to be friends?" as he pointed to his now ready-to-attack Wurmcoil Engine and Nemesis Mask.

James continued to puzzle us a bit by playing odd creatures such as Reassembling Skeleton and Goblin Sharpshooter. At this point Troy had turned his attention to Brendan and left me open to pound into James again, dropping him to 28. At this point he had a huge graveyard thanks to Sword of Mind and Body dumping his library into his graveyard.

Make a note of that for later. 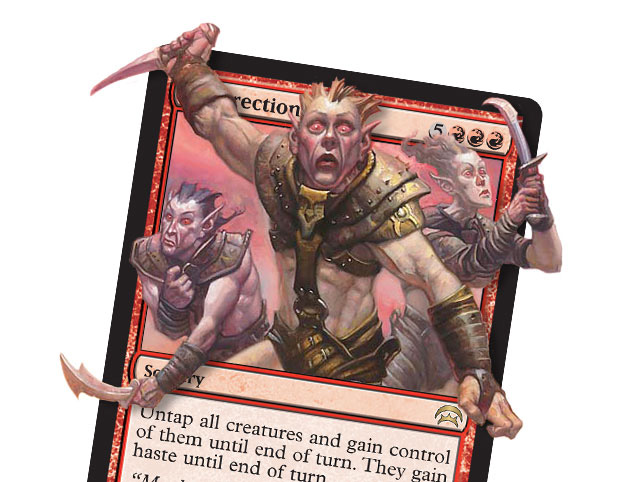 Then, it happened. With everyone sitting on a board full of creatures James pulled the trigger on Insurrection. Troy was fresh out of countermagic and Brendan used his Tumble Magnet to tap down my super-powered Etched Champion after James took it. We all took damage equal to our own creatures swinging back at us before he popped them all to Viscera Seer.

Troy didn't have much to follow up other than to play Mystic Snake against me when I try for my own Wurmcoil Engine. Nice.

I equip my activated Chimeric Mass with both my Swords and clip Troy again since Treva was nowhere to be found for the moment. Then Brendan finally got to cast Ulamog, the Infinite Gyre and promptly picked off Homura's Essence.

But all this changing was for naught as James untapped for his turn and laid out Living Death. How many creatures are in this picture? 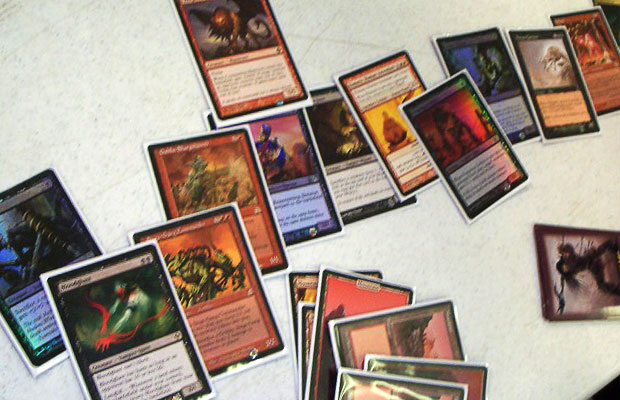 Conquering Masticore took a Wurmcoil Engine. A sacrifice of Anger, Wurmcoil Engine, and Homura, Human Ascendant later and James wiped us out of the game. 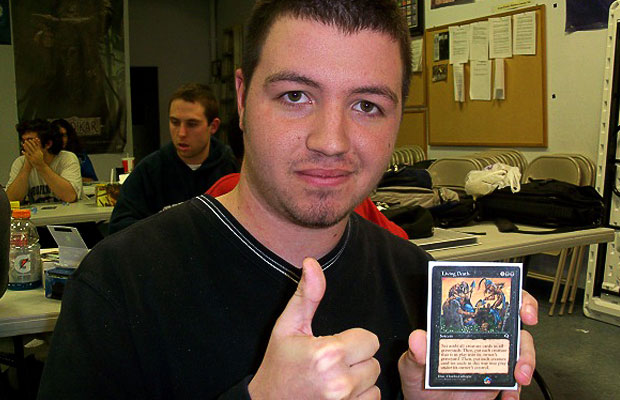 I guess I shouldn't have milled so many cards against James. My bad.

Whether it's using creatures with metalcraft or just piling on the artifacts, getting into a deck of all artifacts (and the occasionally colorless spell as well) is something that's easier to do than ever before.

Have you built an all or almost all artifact deck? Have you seen someone else's? How would you go about putting together a deck lacking color but full of metallic flavor? Think you have a great deck? Share through email or on the forums and tell us why your take is awesome.

Just remember to wear your blacksmithing apron if you're going to fire up the forge.