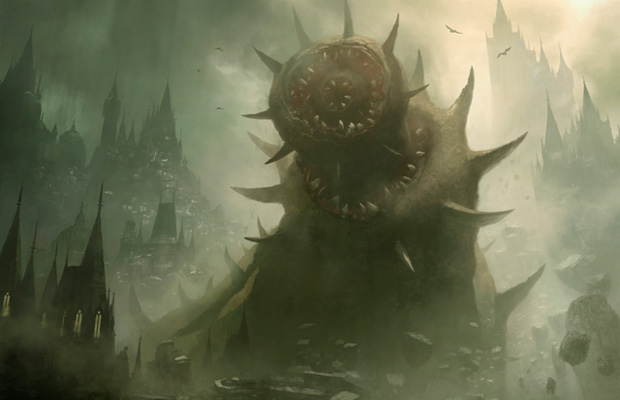 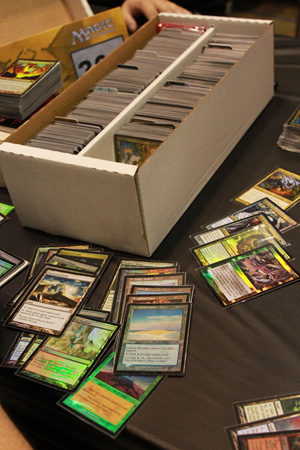 More than a year ago I decided to pile a copy of every card I'd ever want for Commander into my Commander Box. The box doubled in size since it was first pictured; it's only natural, since I've been working out with it through a year of new sets.

What's important about the box isn't that it's most of my awesome cards, but that they're sorted in a meaningful way. It means I can rapidly build, change, and disassemble any Commander deck at will. It's possible to do any of those things anywhere, so I did this at Gen Con Indy a few weeks ago. 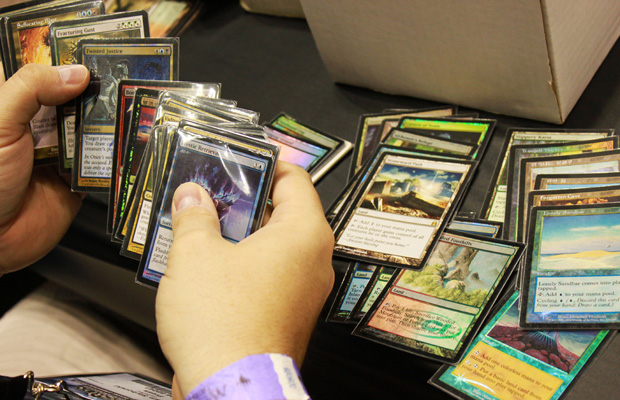 Why build a new deck at Gen Con? The only Commander options I had were stale, well-played, and tuned. I found each of my decks miserable. 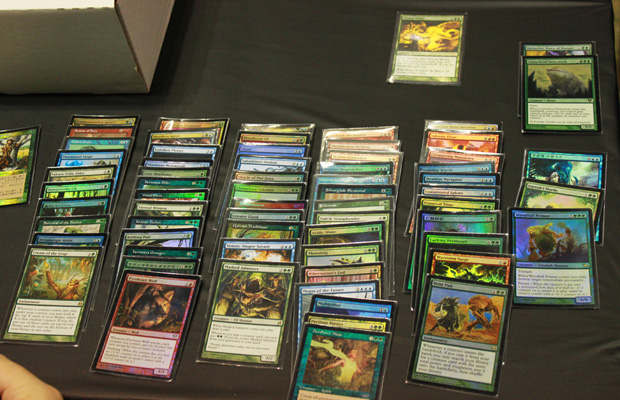 Some of you adore making your deck dominate multiplayer games. Some of you work very hard to maximize the potential of every card and action you take in Commander. I often choose to do something different: simply do the things I enjoy. With Ghave, Guru of Spores, we made tokens and sacrificed them for other things. With Grand Arbiter Augustin IV we bounced things on and off the battlefield repeatedly. I happen to love those types of things, but the decks were also incidentally powerful. Doing things I enjoy isn't incongruent with mighty plays.

I believe that's why I got bored of them so quickly. Doing fun stuff is great, but repeatedly crushing games under an oppressive heel of consistent strength isn't. To support "the best four days in gaming," I decided to build a deck that came with an obvious weakness. I wanted to use cards I normally don't use, in ways I normally can't.

There was one legendary force that shouted for something different.

Maelstrom Wanderer is a deceptively powerful Commander. "Cascade, cascade" in the text box translates to "get two more spells out of your library for free." Seven mana for three spells is a great deal, but that's not what I was most interested in.

Creature is my favorite type of permanent. It's a blast for me to make oodles of them as tokens, to turn them sideways in attack, or simply to get the effect one gives entering the battlefield. In an instant, I knew I was building a deck of creatures meant to maximize Maelstrom Wanderer.

But as I fanned through everything green, another idea interjected itself: Primal Surge.

Creatures are permanents. We established that already. "But what if I didn't use anything that wasn't a permanent..." drifted across my mind's eye. Away went Cackling Counterpart, Bonfire of the Damned, and Worldly Tutor. My piles thinned from taking away instant and sorceries, and I added in every creature that would find lands.

It looked amazing. So I added another limiter: no colorless cards. I don't mean "no artifacts" as, spoiler alert, a deck full of creatures makes Birthing Pod very appealing. Relying on just creatures to do all the work, and ensuring everything required a color commitment, seemed sufficiently fun and fair.

Here's where I ended up. You tell me what comes out for Worldspine Wurm:


How it works is simple:

How it performs is a story for a few weeks from now. I guarantee you should stay tuned for it. 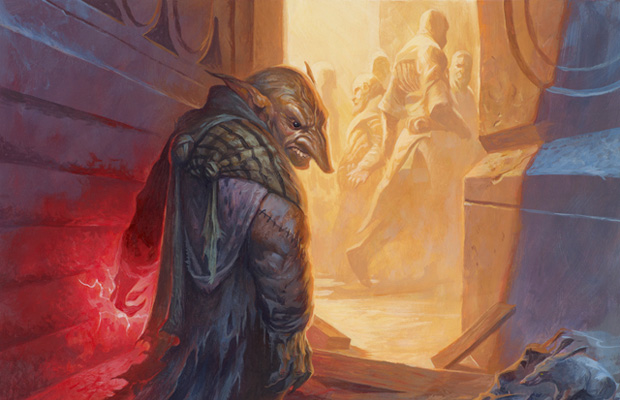 But Wait, Aren't We on Ravnica?

Yes! That's the story behind my Maelstrom Wanderer creature heavy, all-color, Primal Surge-equipped, Gen Con Commander deck. Worldspine Wurm is exactly the type of creature I want in it. To recap:

Each of these features is a benefit we can use.

So what does a Worldspine Wurm's swagger look like? Take your pick!


It isn't the most beautiful of decks, but Beasts, Wurms, and Saprolings aren't renowned for their beauty. The plan is as simple as we set out:

There are plenty of little tools built into the deck, too. Regal Force draws a chunk of the deck. Parallel Lives and Rhys the Redeemed make swarming a real threat. Worldly Tutor, Chord of Calling, and Mwonvuli Beast Tracker let our deck deliver on command. Thragtusk even gives us life while leaving a baby behind.

If you choose this plan, more cards that draw cards might be wise: Elvish Visionary and Greater Good can do a lot of work. But not every Worldspine Wurm deck needs to be slow.


Borrowing heavily from one of Gavin Verhey's Avacyn Restored previews, Druid's Repository, this is a mostly-Standard-but-not-really deck meant to make the most of dudes and mana.

We get to be an aggressive Elf deck, bumping out and potentially trampling over with a bevy of the pointy-eared. Ezuri, Renegade Leader provides a well-placed mana sink that empowers almost every creature we can cast. And then... surprises. If you don't need to spend the mana, banking it up for Worldspine Wurm lets us go over the top and into an opponent's face.

A 15/15 trampler that leaves behind friends is an end-game that works when a fast rush of Elf creatures fails, and that same fast rush fuels playing it or the Genesis Wave that will. But tricky tricks and cheaty cheats to put Worldspine Wurm into play pale compared to going the old-fashioned way. 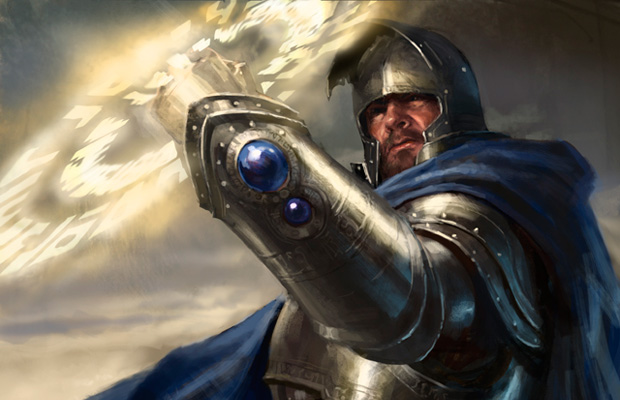 Kiora Atua, with a Worldspine Vengeance


While Duels 2013 is all the rage these days, it was in Duels 2012 that I first played through completely. One of the decks that stonewalled me for a time was Kiora Atua's deck filled with lands, putting lands into play, and fatties.

Making lands and casting fatties is as primal as Magic gets. Here, I've updated a few lands and tweaked some of the big monsters included. There isn't anything significantly different here, as there wasn't anything broken to begin with. Laying lands, then laying the beats, is a tried-and-true recipe.

However, why a classic ramp deck came to mind was that it also made perfect sense for next week's preview, [CENSORED]. What makes it a good fit here will have to wait until next time: Sometimes making the ordinary extraordinary changes everything. 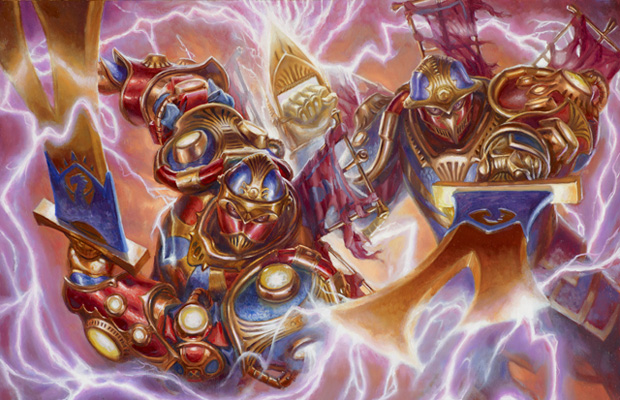 Return to Ravnica is something that has me completely discombobulated. Whether it's the work of an Izzet experiment gone awry or a magical lobotomy by a Dimir agent, my thoughts keep jumping from guild to guild.

Last week's poll showed that this isn't the case for you:

Is it Izzet? Of course! Everyone's favorite tinkerers of all things magical are adorable, desirable mad scientists. I know we're all looking forward to what they're going to cook up next. This week's poll is a little more specific.

First, visit the handy Guild Poll to find out which guild is yours. Tell me here:

My personal feelings toward fairness, with a little excited zeal mixed in, made me a natural for the Boros. I'm curious to see where all of you fall too.

Join me next week when I overload on the awesome. See you then!