ith Conspiracy having just been released, I want to talk about what is, at least to me, the most interesting new mechanic from the set: dethrone. I want to look at some of the more intriguing dethrone creatures, the strategy behind dethrone, why R&D is using it, and how you can best use dethrone in your games, all while making several bad "de-" puns in the process. Let's get started!

Before getting too far into it, we should take a little refresher course for those who don't remember exactly how dethrone works. Kelly Digges laid it out pretty clearly in his article, and it is a relatively straightforward mechanic. If your creature has dethrone, when that creature attacks the player who has or is tied for the most life, the creature gets a +1/+1 counter. 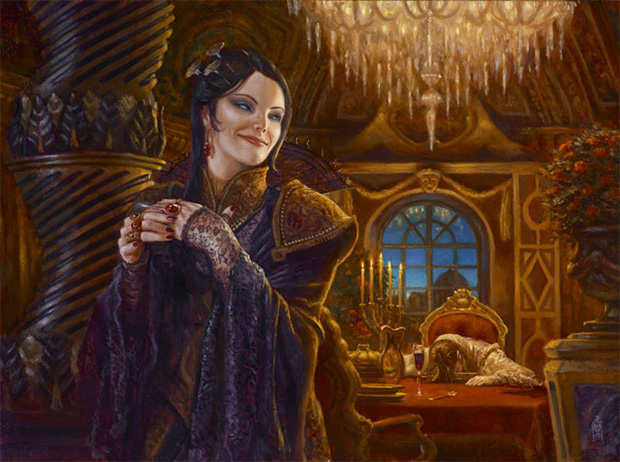 There are a couple of points to keep in mind. The first is to remember that the creature gets the counter before blockers are declared. This means that Marchesa's Smuggler will be a 2/2 when dealing combat damage. It is easy to forget that when determining which creatures should attack. You don't want to be holding back a creature that probably should have joined the attack. That sort of thing can be de-sastrous!

The second thing to remember is that dethrone stacks. If Marchesa, the Black Rose is also on your side of the battlefield, her Smuggler has dethrone, dethrone. Getting two +1/+1 counters for attacking the person with the highest life total can be a pretty alluring incentive.

If you are talking dethrone, Marchesa, the Black Rose must be part of the conversation. She has dethrone herself and she gives it to all your creatures. To further incentivize you to attack the "life leader," Marchesa brings the creatures that have +1/+1 counters back to the battlefield when they die. Now your creatures are not only bigger, you can even save them from mass or targeted removal. Or you can create nutty loops with Mikaeus, the Unhallowed. Undying and dethrone are strange bedfellows.

I am a fan of hexproof creatures, but on a creature with dethrone, I want evasion on my creature. Knowing that someone can't use targeted removal on my Marchesa's Emissary with several +1/+1 counters is nice. Dethrone doesn't really like abilities that bounce or flicker the cards out of play, since they lose all their counters. The problem is, hexproof really doesn't help get the counters on there in the first place.

While Marchesa's Emissary doesn't provide any evasion to help get the counters, Marchesa's Smuggler solves that problem. I'm not suggesting you'll often be able to cast a creature, then be able to afford three more mana to give it haste and make it unblockable until the end of the turn. However, even if you are paying three mana so a creature you already had in play for a while can't be blocked, that may be what the doctor ordered.

I like Treasonous Ogre mostly because it has a way to ensure that you are never the player with the most life, so dethrone benefits are always available. In Commander games, spending 3 life to get one red mana can mean some pretty crazy things, considering how much life can be spent. Even in regular, 20 life games, spending 9 life isn't unreasonable, particularly if you are getting the boost to drop Scourge of the Throne onto the battlefield three turns early!

Uprising in the Kingdom

3 Treasonous Ogre 3 Scourge of the Throne

3 Scourge of the Throne 3 Draining Whelk 3 Mikaeus, the Unhallowed
39 Cards

3 Scourge of the Throne 3 Marchesa, the Black Rose 3 Mikaeus, the Unhallowed 4 Damnation
60 Cards

The real problem with Treasonous Ogre? Without hexproof, shroud, or protection from any color, pretty much everyone you're playing against will be packing some kind of de-ogre-ant.

Scourge of the Throne looks at you and says, "So, getting a +1/+1 counter just isn't enough incentive to attack the person with the highest life total? What if you do that and I let you untap all your creatures and have another attack step? You can even attack anyone you want this time? How about it?"

The great part is that just Scourge of the Throne, not all of your creatures, has to attack the player with the highest life total to get the second combat phase! This means that you can get multiple attacks on any player in the game, just so long as Scourge of the Throne goes after the life leader in the first attack!

Realistically, Scourge of the Throne is a 6/6 (at least!) Dragon for six mana that offers a serious benefit. You don't even have to use the additional combat phase! You can attack the life leader, untap and just say, "I'm good," while sitting there with all those untapped creatures. Quasi-vigilance is a good second option! Scourge of the Throne will be a delightful addition to my casual Dragonstorm deck. I love the idea of a handful of Dragons appearing and attacking multiple opponents, then untapping and finishing off whoever is left.

When looking at creatures with dethrone, keep in mind they will not always get bigger. In some games, you are the player with the highest life total. In other games, attacking the life leader is simply sacrificing your creatures to no benefit. In other games, you can see that your focus needs to be on a different player. Attacking a player with 21 life over the player with 20 life and three creatures that are just waiting to attack you is, sometimes, simply foolish. On top of that, if the life leader is in a powerful position, you risk incurring that person's wrath. I'm all for attacking the powerful players to bring them down, but do it when you can cripple their ability to hit back.

R&D created dethrone as a way to keep the game moving. The idea was to attack the leader of the game. Dethrone was a great way to encourage that. If you want a bigger creature, you should attack the player in the strongest position. This lets the control of the game shift from one player to another as the other players work to topple whoever the current leader is. When a new leader emerges, the attacks shift and begin again.

The problem with dethrone is that life totals are a poor way to determine who the leader is. If you have a single creature with lifelink on the board, you may be over 20 life, while everyone else is under. If someone else has Sorin Markov on the battlefield, are you really the strongest player on the battlefield? Possibly, but knowing that the player with Sorin can move your life total to 10 suggests that you aren't really the leader, based on your life total.

So how do you determine who the real leader is? Unfortunately, the answer is not easy. You are left taking all the variables in Magic, throwing them in a big pile and making a decision based on that. Little wonder there are so many games where the players in the game can't determine who the primary threat is, or even if there is a primary threat!

Graveyards are another area that needs to be examined. My friend Josh enjoys the recursion aspects of many cards, so tracking his graveyard is often a good way to know what will be happening in the game. While I have some decks that abuse the graveyard, it is a good bet that if I have great cards in my graveyard, and Josh's cards are just average, his graveyard represents a bigger threat.

Many newer players ignore the cards in hand when determining who the leader of the game is. A player with seven cards is far more likely to stop your breakout play than someone with only one card. Now we can talk about the variables you can't see. Card quality is relevant as well. If two players each have six cards in hand, but one of them has been scrying every turn for the last five turns, that player's hand is far more threatening.

Then there are the decks themselves. If I'm playing my Thallid deck, I'm far less a threat than any deck Tyler has brought to the table, regardless of the conditions of the battlefield or the number of cards in hand. My deck would have to curve out perfectly and Tyler's entire game would have had to collapse for anyone to consider me the leader of that game.

Finally, the players themselves are factors to consider when determining who the leader of the game could be. In my group I am, at best, in the top half, as far as skill levels go. When our games start, before anyone has played a single card, I am rarely the favorite to win.

Given all these variables, dethrone doesn't target the leader of the game, just the player who happens to have the highest life total. Given how complicated any other metric would be when trying to determine who the leader of a game is, it is understandable that R&D would use life totals.

Dethrone is a fun multiplayer mechanic. It adds a layer to games as players will be forced to reconsider how highly they value their life total. In spite of the implications of a mechanic named "dethrone," don't look at life totals as the sole determiner of who is the primary threat, but as another level of strategy. After all, the set is named Conspiracy!