uite some time ago I told you about a Sealed Deck League I had been organizing. It was a multi-week, over-the-holidays adventure of pack cracking and deck building that would lead up to the ultimate showdown of ultimate 40-card deck building in teams: Emperor Magic using Sealed pools. Here's the breakdown of what, exactly, Emperor Magic is:

We had adjusted the point structure since I posted the league article, but that's just unnecessary details. At end of nine weeks, the "Top 6" from the league included a solid mix of different types of weekly casual players:

While it would have been a ton of fun to join in the Emperor melee, I decided to step down and just document everything, which is why Tim was able to get in on the action. Tim was just outside the cut point and had made an incredible effort over the weeks. It was a good run, and he deserved a chance to play one last game.

I divided everyone up sort of haphazardly, and I thought I was going to have to play after all until the true sixth player, Greg, came in late. 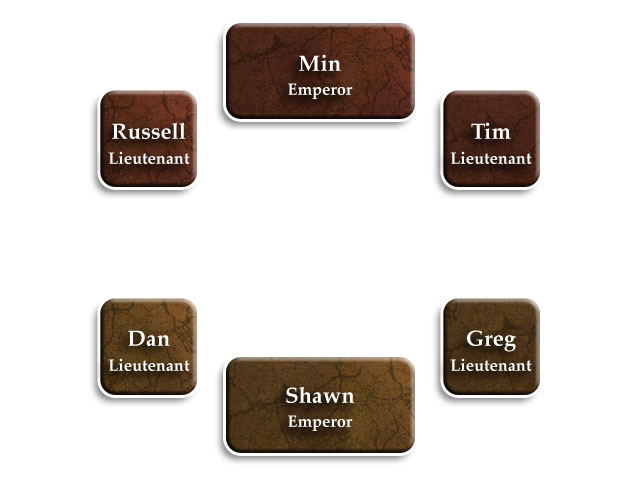 The traditional team approach to Emperor games is the "Sword and Shield" method of having the right Lieutenant play a defensive deck designed to stymie the opposing left Lieutenant, who usually plays an aggressive deck—hence, Sword and Shield.

With the teams divided, there was a little confusion at the onset. I had originally planned for teams to share pools and create three decks from the combined 27 packs of cards but, as Min pointed out, this could cause some severely overbearing decks: more than four copies of Doom Blade on a team and one player can run them all. I agreed that this didn't jive well with the laissez-faire, "make a deck you want to play" approach we encouraged. That said, Team One accidentally followed through with my original plan, while Team Two did not. It was an inadvertent advantage that wasn't discovered until after the game had started.

Additionally, I had missed the link to the updated Emperor variant rules (despite having linked it in my original Sealed article) and was looking at some rules from when Urza's Saga had been released. Needless to say it wasn't too long until we realized that the old rules didn't make much sense. As a general principle in Magic, if a rule description involving creatures actively refers to "summoning sickness" as rules terminology, you've hit the WABAC machine. Some Internet searching later, and everybody was on-board with the correct (and modern!) rules.

Here were the decks piloted by Team One:

1 Quest for the Gravelord

1 Disfigure 1 Quest for the Gravelord

As you can see, the decks utilize the best of both worlds in terms of availability from Magic 2010 and Zendikar. A mono-black, removal-laden deck seems to be the type to punch through nearly anything—two Black Knights is a fine insulating offense that will punish any white-based defense, with first strike always being relevant in Limited. The shield deck seems equally disruptive, especially with the multiples of Sky Ruin Drake and Shepherd of the Lost. Kor Hookmasters can really put a damper on a quick offense. And, of course, Min's go-to plan of dropping Soul Warden followed closely by Ant Queen was a proven back-breaking strategy throughout the weeks. There was never enough burn and removal to stymie the flow of life-gain-triggering Insects. 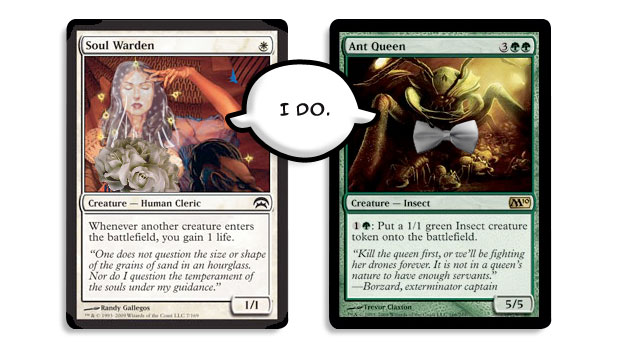 Team Two had some similarities in their approach, but with a dramatically different Emperor deck.

While Team Two inadvertently locked into a disadvantage with unshared pools, it wasn't as through their decks were slouches. Greg has a solidly white-blue control build as a Shield deck. Emeria Angel and Felidar Sovereign promised long-term strength backed up by cheap, defensive fliers in three Kor Skyfisher. Four Kor Sancifier, with their solid 3 toughness, looked promising to block with as well as break any awkward artifacts or enchantments—a nice dual focus. Of course, Dan took to the path of the Sword with his incredibly focused red-black deck and seemed primed to cut through quickly. Shawn's Emperor deck went a very peculiar route: nearly creatureless with all-in support for the men-at-arms. Burn, with two Fireball available, backed up by deep card draw (four Sign in Blood can just be unfair) seems a natural pair to the hyper-aggressive Sword. The real tech was the two Act of Treason—steal an opponent's creature, then overwrite the "return at end of turn" effect by sending it to the left! 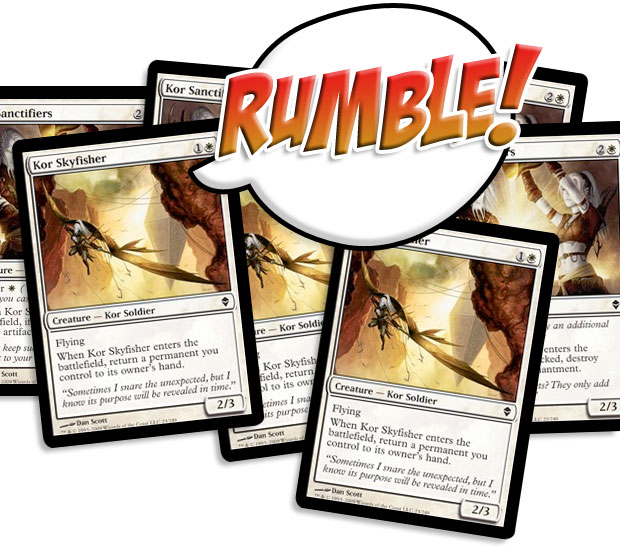 Of course, all the best planning and plotting doesn't guarantee anything, and awesome pools of cards follow the same rules for randomness every deck in Magic does.

It was a dusky, cold evening when the teams assembled. The cold wrapped around outside, setting the stage for a chilled reception between normally amicable amis. The two teams set up shop and readied their decks-at-arms.

Russell won the die roll to start, and only Shawn took a mulligan to six. With everyone on board things started off fairly quietly, with lands all around and some one-drops mixed in: Russell with Quest for the Gravelord, Greg with Steppe Lynx, Dan with Guul Draz Vampire, and Tim with Kraken Hatchling.

The second round of turns was more exciting. Russell dropped a Black Knight as Greg played his own Kraken Hatchling and passed the Steppe Lynx left. Shawn passed the Lynx to Dan, and Dan opened his turn by getting a landfall trigger. Tim opted to block the Lynx with Kraken Hatchling, taking a scrape of 1 life, but Dan showed the Hatchling a Burst Lightning before dropping a Trusty Machete. Tim laid his land and passed to Min, who had a Llanowar Elves.

Russell started off with some aggression of his own and took his Knight to the red zone, but didn't have a trick after Greg blocked with the Hatchling. Russell followed up with his second Black Knight. Greg had a Makindi Shieldmate and Shawn had a Wall of Bone. Dan dropped another land for a landfall trigger and swung in at Tim for 3 more before he dropped an "Ooooh!" on drawing Vampire Nighthawk. Tim shrugged as he casually cast a Kor Hookmaster to tap down the Nighthawk. Min missed his third land but had another Llanowar Elves.

On his fourth turn, Russell had land four and a Crypt Ripper, which got him in there for 2. Greg spent his turn sending the Ripper on a Journey to Nowhere. Shawn passed the Wall of Bone to Greg and had a Howling Banshee to drop everyone but Min by three. Dan added both a Plated Geopede and Vampire Lacerator to his team. Tim had a Paralyzing Grasp to permanently solve the Nighthawk issue, and Min followed up by putting Pacifism on the Geopede.

Russell sent his Knights in again on turn five and netted another 2 damage before dropping a Bog Tatters. Shawn and Dan conferred for a moment before Shawn leveled a Fireball for 4 at Tim, who fell to a precarious 9 life. After getting the Howling Banshee from Shawn, Dan equipped it with a Machete and dropped another Swamp for landfall before swinging with the entire team. Tim blocked the Lacerator with his Hookmaster and took a lethal 10 damage. With Tim knocked out, Dan played cast Seismic Shudder which wiped away his Guul Draz Vampire as well as both of Min's Llanowar Elves. Min responded with another Pacifism, this time on the Banshee.

The quick fall of Tim sent Min's team into a full backpedal. Russell tried to send both the Black Knights over at Min, but got stuck in Greg's Whiplash Trap; Russell had to settle to send only the Bog Tatters to Min and replay both the Knights. He also noticed his missed Quest for the Gravelord triggers from Min's Llanowar Elves. Greg dropped an Emeria Angel followed up by a land to net a 1/1 white Bird token. Shawn has another land and just cast a Diabolic Tutor and Min, knowing there's another Fireball in there somewhere, was not happy about it.

With Dan's Nighthawk back online thanks to Paralyzing Grasp leaving the game with Tim, Dan dropped yet another land for landfall, equipped the Nighthawk with the Machete, and swung in at Min with the team for 6. Min found his third land, a Plains, and dropped a Veteran Swordsmith

Russell started his turn off with a freshly drawn Doom Blade on Greg's Emeria Angel, and remembered to put a counter on his quest this time. He cast a Blood Seeker and passed both of his Black Knight to Min. Despite the initial blow of losing Tim, things were starting to look up for the beleaguered team.

Greg passed his Bird token to Shawn, and Shawn untapped it, drew for his turn, and looked over at Min. He cast Act of Treason on one Black Knight, then followed it up with his other Act of Treason on the second Black Knight before sending both of them, along with the Bird, to Dan. It was a complete blowout against Min, with both of his reinforcements being permanently stolen.

Dan started his turn off with yet another land for landfall and sent his now burgeoning team at Min. Min took the best blocks available (Veteran Swordsmith trading with Steppe Lynx and Bog Tatters falling on the sword of a Black Knight) and fell to a precarious 7 life. Victory seemed in clear sight for Shawn's sharp Lieutenant. 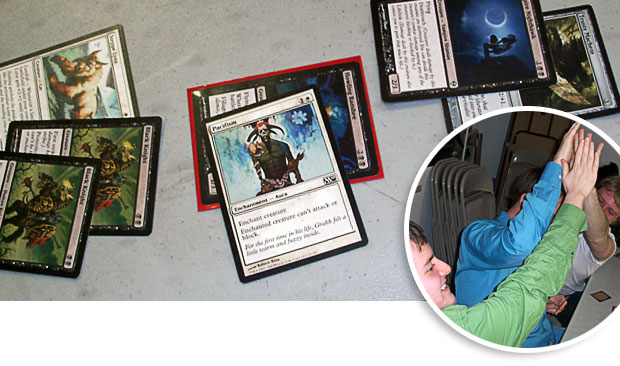 Russell remembered the Gravelord triggers again, but getting the 5/5 was too little too late. Min had a Palace Guard on his turn but after looking over the options with Russell it was clear there was no real out possible. Min's team took the concession in stride.

The Emperor Dark Side

As it was clear to see here not every game of Emperor is a protracted back-and-forth duel. Sometimes it's a speedy beatdown after a team takes a stumble, as in this case, or other times it's an unexpected combination of cards that creates a must-answer threat. Well-formed plans and solid strategies can always meet unexpected bumps in the road or a blazingly quick opposition, and that's the risk—and the fun—of any team-based game of Magic.

So have you ever tried Emperor? What do you see? How did your game turn out?

Do you think you're ready to be a king?