Get Tied Up With Our Core Set

es, you read the little window decal on the front page image correctly: it's Core Set Week. Is it shocking that an exclamation point was missing at the end of the previous sentence? Since I get a little excited about most things Magic related, am I unexcited about Core Set Week?

Quite the contrary, actually.

Talking about the "most basic" sets in Magic is a different kind of excitement for me. It's quiet, soft, and caring. It has a loud voice from time to time, but it's more about kind words shared around a small table. The Core Set is where Magic comes home, and it's where I go to introduce friends to the game. 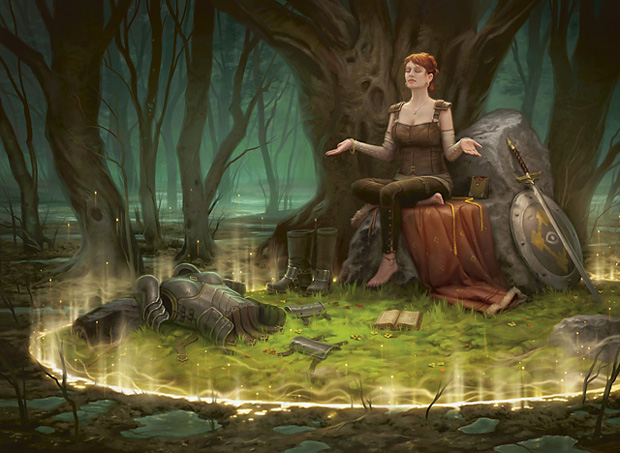 A Legacy of Infamy

Core sets used to be rather boring. Other than a few key reprints that haven't been seen in some time, it was a little harder to be excited about a set composed only of old cards with a fresh printing. So they, you know, fixed that.

Core sets are now full of the juicy things that make Magic memorable, and they're one of the best ways to share the game. Whether it's checking out awesome mythic rares, learning the process of Sealed or Draft, or putting together the start of a new deck, sharing the things that are amazing about our game should be a core part of our efforts.

How many friends and acquaintances do you know who don't play Magic? 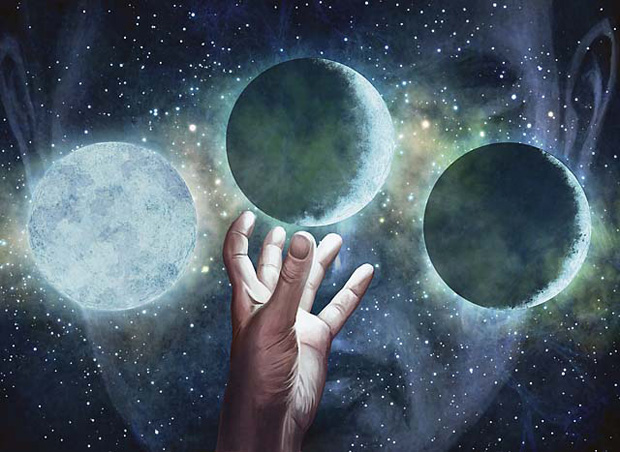 The "simple stuff" of Magic is surprisingly complex, but core sets are built to handle that complexity in a package that matches Magic as a whole. There are three huge reasons to use a core set to show off Magic:

I'm not going to explain all the "simple" stuff, because that's what you should be doing for friends when sharing Magic. My goal is to make that process a lot easier.

When you're already familiar with something complex, it's really easy to brush over the details. For example, do you know how to cast a spell? I mean, really know? Most of us have the right idea but are missing the actual details.

Our familiarity with the game can be deadly to new players. We need to hold ourselves above petty things that can sour the experience. 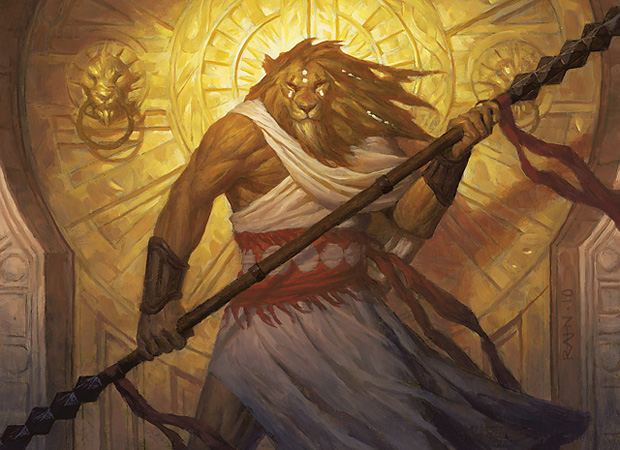 It isn't the patience to play Magic for hours that I'm talking about. (I'm sure most of us can already do just that.) You have to be patient as your friend explores Magic in his or her own way. That's why I try to keep simpler decks and core set booster packs handy: I need to convey the essence of what they're looking for without overloading everything. In that context, Shock can be the better card than Burst Lightning or Galvanic Blast.

You should know your friends better than I do, and each player wants to learn in different ways. That's where the forethought to bring what they want comes into play. Each color, each card, has different flavor and game play. Matching interests and decks up to your friends desires is something you want to do. Just like movies and other games, what your friend likes could be dramatically different from what you do. 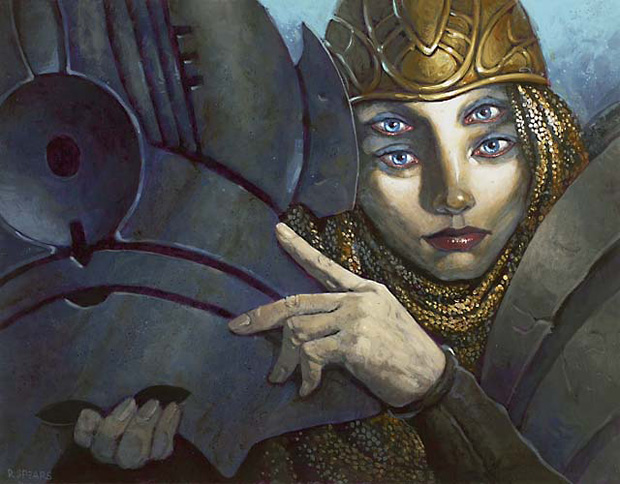 It doesn't make much sense to only show the things you like. I'm a fan of attacking with creatures and making tokens, but some of my friends really enjoy fidgeting with artifacts and enchantments while casting Cancel and Fog. Magic is made up of more than aggressive dudes, and it's up to you to plan ahead for the contingencies where your friends don't enjoy exactly the same thing as you.

Part of what makes core sets great is that they include facets of every color. Red has creatures and burn spells, but also land destruction and spell copying. Blue has countermagic and "draw a card" effects, but also flying creatures and creature copying. Magic 2012 in particular has dualism in blue: you have the aggressive phantasmal creatures, with their Lord of the Unreal, on one side and the usual Cancel and Azure Mage-like cards on the other. Colors shine brightest when it's up to each card to show itself off.

Of course, just because a color can do something doesn't mean it will do it well. That's where the final piece of the puzzle fits: humility. Magic is a game, and winning games is often pretty fun. It's isn't just "some" players who like to win; every player is genuinely working towards victory. 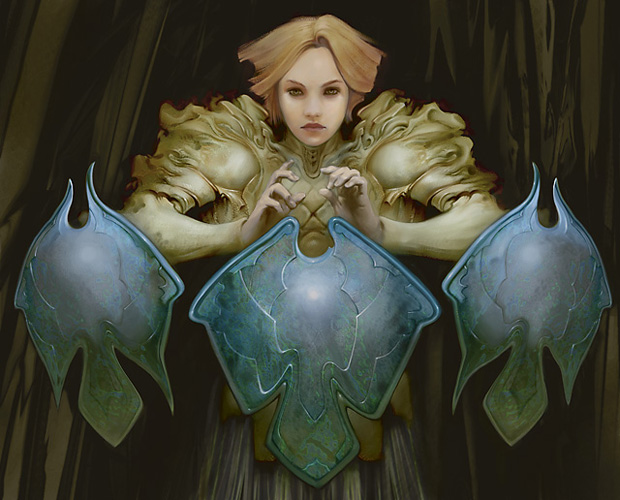 How each of make choices during our games is open to a lot of discussion. What's important when sharing Magic isn't to play it "right" but to play it "fun." It might make sense to take your Friday Night Magic battle-ready Standard deck and play against your friend's Intro Deck, but that doesn't mean it would be fun for either of you. You shouldn't necessarily throw games and intentionally lose, either, as that can cause more harm than help in the long run.

It takes a bigger player to choose decks that can allow either one to win. The Duel Decks series, two Intro Decks, two Sealed decks, or any other myriad of ways to level the playing field is in your, and your friend's, best interests. One of those myriad of ways is to build your own themed decks custom tailored to share among friends.


Almost two years ago, when I first shared it, that deck was a little dated. It's still serviceable, and certainly plays all the same, but freshening it up couldn't hurt.

Still in the Black


Every card here has appeared in a recent core set (with two critical exceptions). It's a bundle of mechanical values that describe black in broad strokes:

But it also features a few things that black has in smaller doses:

Here's a story that highlights what I'm talking about. At the recent Magic 2012 Prerelease I attended I had a pretty fun red and white deck: Serra Angel, Volcanic Dragon, Aegis Angel, and a Sun Titan topped out my bevy of bodies. I was battling hard against a newer player who happened to be wielding an Inferno Titan. When the inevitable, clichéd clash of Titans happened, I managed to come out on top thanks to my Aegis Angel. The game looked over: my opponent had no cards in hand, just lands in play, and 11 life—the exact amount of damage I had through creatures on the table.

With his final draw step came a squint, some reading, a cackling of glee, a tapping of seven lands, and a windmill slam of Sorin's Vengeance. Pow! Right in the kisser. I took 10 damage, putting me at -2. Game over.

It hurt more than it should when that happened. After fighting his Titan for three games (yes, that was also a clichéd "third game of the round" story) I had already believed I had won. But it's those tiniest of tiny chances that make it all the more interesting. With just his one draw step, he went from zero to hero in a game he left grinning.

That experience is what you need humility for. It happens in Magic, and the more you accept it the more your friends will enjoy playing it.

The spells on the order of Sorin's Vengeance let great things like that game happen. Just because you're switching decks doesn't mean the more experienced player won't still have an advantage. Including cards like that in the decks you share will help create those moments of surprise. Shenanigans are baked into these core sets to ensure they happen:

Effects like these can completely change a game. You and your friend need to make this things happen, and let them happen when they do. And it doesn't mean just whatever big spell you play should definitely happen: just as blasting me with Sorin's Vengeance made my opponent the happiest player there, it may be the quiet Cancel held for the whole game that makes your friend smile. It happens.

Bringing friends into Magic isn't easy. Today only scratches the surface of everything that you need to know, but I hope the two-part tip sheet makes it easier. Remember:

If you've been looking to introduce a friend to Magic, I'd love to hear about it. What did you try? How did it go? What would you have done differently? What are you planning to do next time? I'll be reading all of the stories you share in the forums or through email, looking for the best of them. 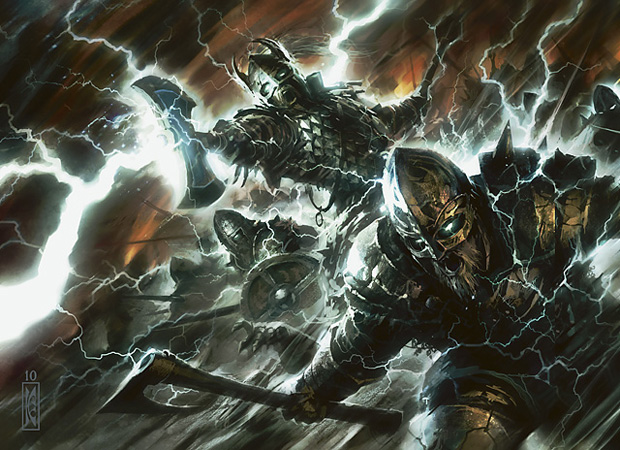 I also have a friend I'd like to show Magic to, and I want you to help! With your experiences, and a little voting, I know we'll all be ready together. Which brings me to this week's poll:

If it looks familiar, it's because it is. This is the same poll as last week, which didn't get recorded due to a technical issue. Since it's Core Set Week, and the latest set is the Magic 2012 Core Set, this poll still makes sense. So vote!

However, there is a second poll I'd like to run by you:

I'm planning on updating several decks, and if you'd like to see how I've put together some simpler ones, with an entirely modern twist, I'd be glad to share my thoughts and have you share yours. I find a great advantage to using a stock deck is that once a new player acquires a taste for the game, their first instinct is usually to build their own deck. Taking your deck back to start all over again with someone else is a process in which I've found success.

Join us next week when we sit down with a few more players. See you then!