f the deafening roar of the monstrous entities didn't clue you in already, it's Eldrazi Week this week, which means many of us (including myself) are going to be talking all about the Eldrazi. There's been a lot of things said about the Eldrazi already and, unlike some of my fellow wordsmiths, I don't have a cool inside scoop about everyone's favorite world-eating obscenities against mana. But I do have a secret weapon to wield, a subtle dagger of insight that stabbed into my head once I started to get down and dirty at the Rise of the Eldrazi Prerelease and Launch Party: Godzilla. 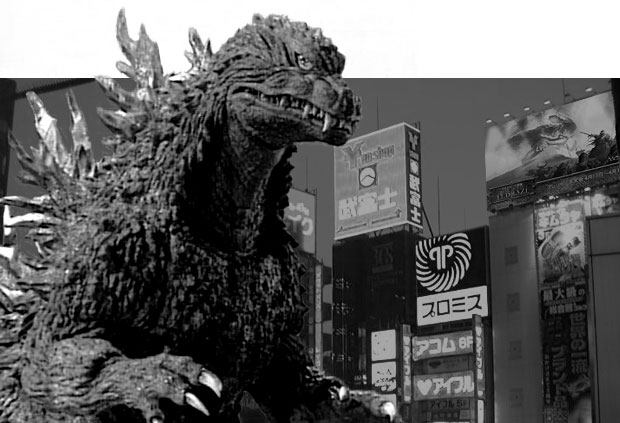 Astute readers (which for simplicity's sake I'll assume is all of you) will recognize that Doug Beyer's article from last week mentioned the famous Japanese monster. While I wasn't aware that Doug was going to make that connection, I'm pleased to see I'm not the only one who sees Kozilek, Butcher of Truth and thinks it would be a great match up against the King of All Monsters—which is what the Godzilla format is really all about. I love my fatties, those huge, stunning creatures of great proportions. Laying down Khalni Hydra, a fully leveled Transcendent Master, or a more "ordinary" offering of Ulamog's Crusher are all moments of quiet joy for me. More specifically, when playing Rise of the Eldrazi Limited, I was more than capable of playing at least one or two of the formerly jailed juggernauts in my decks. It was an awesome experience to be deploying these oversized critters.

While I could continue to ruminate on Rise of the Eldrazi Limited and how epic the Eldrazi are, there are other interesting things to do with the monstrous Eldrazi—like build decks with them. No, not the kinds of decks you've already seen, but decks with something a little different in mind. If you've ever heard the call of building a deck that's just chock-full of the fatties, then you're in for a real treat.

The Eldrazi are the kind of monsters Godzilla always ends up fighting: massive, alien destroyers that will cause the end of the world. Naturally they would fit right at home in a format filled to the brim with fellow lumbering elites. Any format where you have access to nearly every card in the game makes for some potentially high-powered slugfests, as I would soon personally experience, however the Godzilla deck I decided to put together was a "grab whatever I had lying around" special: a crazy deck of fun stuff mostly from the latest sets.

I'll admit, it's not the prettiest of decks (and I'd later regret not hunting for more copies of Avenger of Zendikar) but with the combination of mana ramping (Rampant Growth, Growth Spasm, Dreamstone Hedron), token-generating big dudes (Rampaging Baloths, Woldbriar Elemental), and some flexibility (Stirring Wildwood, Basilisk Collar, Terastodon) I felt confident that I'd always have something to do.

With Tim, Calvin, and Nick, I took a seat to really see what the Eldrazi bring to Godzilla. They weren't in my deck but in Tim's, who was packing multiple copies of Ulamog, the Infinite Gyre, Emrakul, the Aeons Torn, and perhaps some others. Calvin had a pretty interesting blue and green deck that capitalized on Dramatic Entrance and Summoning Trap (along with Boomerang), while Nick had a deeply mean black and green deck that could make great use of cards like Drana, Kalastria Bloodchief.

Like most Godzilla games, it started a little on the slower side with some early mana ramping with Calvin who had both Birds of Paradise and Noble Heirarch, Tim who had assembled the "Urzatron"—Urza's Mine, Urza's Power Plant, and Urza's Tower—and a Seedguide Ash waiting out front, Nick with double Cloudpost and a Kozilek's Predator, and myself, with two Stirring Wildwood and a World Queller. With everyone's mana firing on all cylinders, Tim started the slugfest off with Ulamog, the Infinite Gyre the turn after his Seedguide Ash popped in combat. When the turn wheeled around to mine, I noticed Tim had a distinct lack of creatures to go with Ulamog, the Infinite Gyre, so I traded the World Queller off for the Infinite Gyre, then dropped a Wolfbriar Elemental kicked four times. Nick joined the Seedguide Ash party and found a deceptively small Vampire Nighthawk, but pulled the last time counter off Calvin's Deep Sea Kraken which wasted to time in taking damage into Nick.

I had found a Rampaging Baloths and made a few Beast tokens so when a Basilisk Collar appeared, the Baloths picked it up and traded out with Nick's Nighthawk. Nick's Drana, Kalastria Bloodchief made her appearance then. As both Nick and Tim were working to stabilize their defenses, I turned my growing token army against Calvin. What do you think happened when I sent a Wolfbriar Elemental, a 4/4 Beast token, four 2/2 Wolf tokens against a Birds of Paradise and Empyrial Archangel? 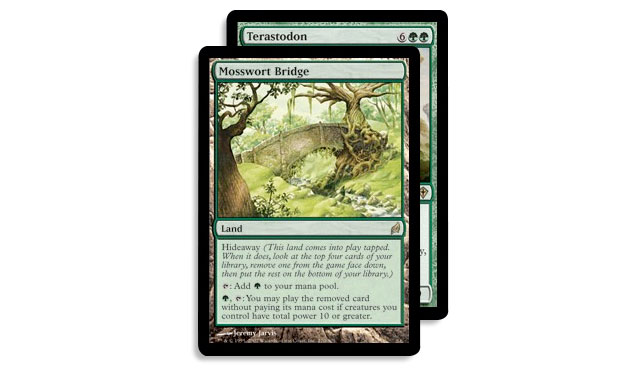 Calvin, as it turned out, calmly unlocked his Mosswort Bridge to drop a Terastodon onto the battlefield, which took out Tim's Urza's Mine (his only one, turning his big colorless mana off) and one each of Nick's Cloudpost and Swamp lands (which reduced his colorless mana as well as turned off using Drana). While I lost some troops, I did knock out the Archangel which, along with all of the Terastodon stomps, felt like a good combat. As the defenses continued to intensify—we were all playing around the copies of Seedguide Ash that kept popping up—Tim decided to take things to the highest levels by using Congregation at Dawn to stack Emrakul, the Aeons Torn and two other mean creatures that didn't really matter. Once that was set, but before the turn moved over, Calvin used a well-timed Summoning Trap to grab a Woodfall Primus to nail Tim's second Urza's Mine which, again, turned off Tim's big mana. 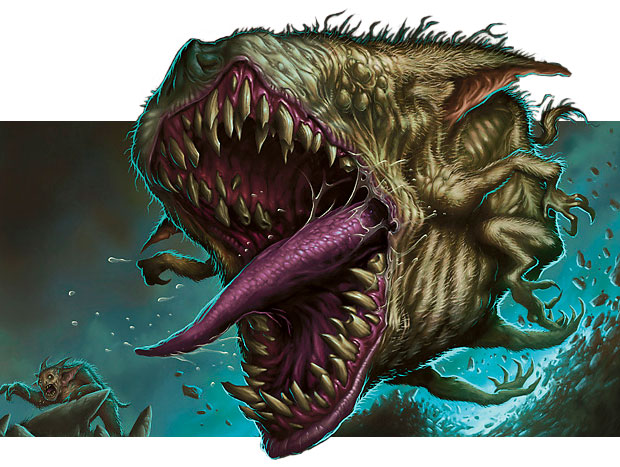 Nick, meanwhile, dropped a Doomgape, which allowed him to sacrifice his Seedguide Ash. However it was a little too late as my constant stream of Rampant Growth and Growth Spasm let me play a Wolfbriar Elemental kicked eleven times. Yes, eleven times. With a sturdy defense set, I made a move to kill both Nick (at 5 life) and Tim (at 7 life) in one fell swoop. After setting the blockers and looking things over, Nick engaged in a bit of vindictive altruism by using his Drana to kill my Eternal Witness attacking Tim. Nick was defeated, but Tim was left with 1 life. One life ... with an Emrakul, the Aeons Torn in his hand.

Tim tapped the top of his library for a land and was rewarded, flipping his fresh draw to tap out for an Emrakul, the Aeons Torn after swinging at me with his second Ulamog, the Infinite Gyre of the game. On his free follow up turn, Tim sent both of the Eldrazi masters at me. I managed to block Ulamog, the Infinite Gyre both times, but Emrakul, the Aeons Torn really hurt, and due to the annihilator triggers I had no lands—I really wish I had found Avenger of Zendikar during this game!—as all I needed was my next turn to swarm over the massive dudes sitting all around me. Tim played an Artisan of Kozilek to get back an Archon of Justice. Calvin drew for his turn, laughed a bit, and passed to me. With the bare minimum of blockers I needed to leave behind, I sent my troops into the fray for potentially lethal damage against both of them. After a brief pause Calvin, tapped to cast Dramatic Entrance (oh no!) and puts a Birds of Paradise—the only other card in his hand—into play. 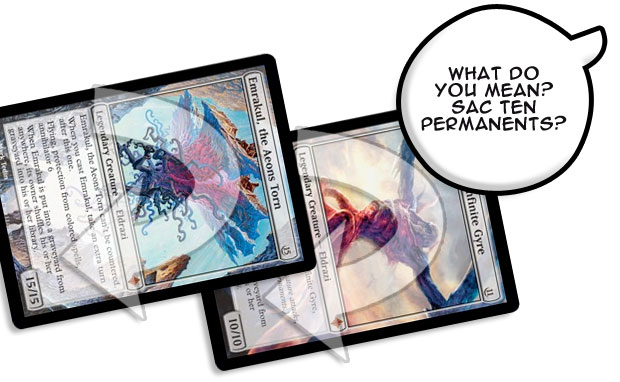 With a sigh of relief after surviving an Eldrazi onslaught, I won the game. As we started to shuffle our decks back together we took a quick vote to see who was getting a player's vote. Tim chose Nick for his black-green good stuff deck, but the rest of us picked Tim since dropping the Eldrazi was everything we wanted to do ourselves. The final breakdown, after counting in the points for our fatties, was Tim with 8, myself with 6, Nick with 5, and Calvin with 4. Tim, after all his unfortunate mishaps and well-placed Eldrazi attacks, ended up taking home the bacon. I guess a few copies of a 15/15 will help you do that.

Whether it's making everyday use of the Eldrazi menace or a way to play things with a focus on the larger side of creatures, Godzilla is everything you could want when you have fatties and friends. Join me next week when I talk about some perfectly ordinary everyday Magic. 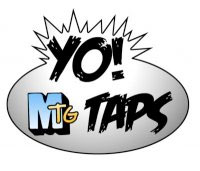 I'm a big fan of getting out there for the Prerelease and Launch Party events as it's an absolutely awesome way to get your feet wet with the latest sets. I've had more fun at these events than I can properly express in words—but that doesn't stop me from trying. For this Prerelease I made it to a place in Baltimore called The Amazing Spiral, the home store for the Yo! MTG Taps! weekly podcast. In addition to slinging some cardboard and having an awesome time I managed to sit down with Joey from Yo! MTG Taps! to talk about our first impressions of the set from the Prerelease, some epic stories from the day (including the fact that we both played the guy who had Gideon Jura in his deck!), and even some of the awesome side events happening at Grand Prix–Washington D.C. If you're interested in any of this, check out their Episode 19 (among the other episodes they have put together) at iwantmymtg.com!