Nort glanced around rapidly. All he could see was that his brethren were being killed. The honed, practiced, and disciplined ranks of the kor didn't scatter when the warren charged out from the cliffs. The archers didn't flinch as a mob broke off and stormed in from the other side of the camp, a tactical flanking maneuver that had been effective on smaller groups before. And while the torchslingers had surely burned several humans in the initial fray, fervent chanting now rang out from the clerics behind the thin lines of men-at-arms who no longer seemed to mind the errant flame licking their feet.

Normally, Nort would begin to feel the growing palpitations of his heart and the chill of cold sweat dripping from his face, but not today. The nomadic kor in front of him had come into the peaks on their own accord, without regard to his own tribes' needs and place. There was nowhere else to go—the neighboring tribes were far stronger, Nort knew—and the fear of giving up his status within the warren was far more than his of dying.

Those more cautious, or opportunistic, were holding back, still hiding in the nooks and crannies of the cliffs around him, and Nort knew what must be done. With a loud cry, Nort sprinted towards the nearest line of Kor. With a spear in one hand and a dagger in the other he raced towards his fate: either an emboldening display of ferocity, or death in fighting for what precious stable land there was to be had.

The soldier looked bemused at the sight of the goblin barreling in. The shieldmate next to him took stock as the suicidal menace came on. But, unlike the frenzied and mostly untrained mob that was being pushed back, the soldiers had no way to know that Nort was a goblin not to be underestimated.

As the soldier started to swing, Nort quick-stepped in a weave, putting his dagger square into the throat of the soldier—whose eyes went wide with utter surpriseand twisted to put his spear past the inside of the shield of the other. While the sting of the shieldmate's awkward, glancing slice hurt Nort, the piercing blow from the spear staggered the kor back a few steps before he fell to the ground, blood flowing from an obviously mortal wound.

Commotion erupted from behind Nort. The fearful, cautious, or unbelieving squealed in unison as the glinting line fell back, away from Nort's strike, to fill the suddenly gaping holes in the line. As the kor desperately moved to finish regrouping, the force of the warren surged out, instigated into renewing pressure on the assault. Nort grinned as he screamed a primal cry.

This day was not lost; the land was still his home.

f you missed good Mr. Rosewater's introduction yesterday, welcome to the second Goblin Week! While Vampires, Kor, and Allies have all jumped out as "cool new tribes" in Zendikar, Goblins have been there from day one, steadily growing into today's swarm of possibilities.

There have been a lot of different takes on Goblins, from the deceptive cunning of the Kyren on Mercadia, to the rough-and-ready dwellers of Otaria on Dominaria and the shamanistic swamp dwellers on Lorwyn, Goblins have quite the variety of flavors. When I was informed of the upcoming Goblin theme my first instinct was to create an Elder Dragon Highlander deck around a famous Goblin and play it out. Of course, the road to trouble is paved with good intentions, and I wasn't able to acquire all the cards I needed for my deck.

Rather than slap something else in and gloss over the details, I wanted to change gears and downshift into something slower that takes some time to digest and mull over. While it isn't always glamorous or as immediately exciting as playing a game, the process of building a deck is something that gets me fired up. Generally what happens is that I see two cards put together for the first time in front of my eyes, and my mind becomes immediately flooded with the epic awesomeness of something neat.

The Eyes of a Boggart

My deck building usually consists of two steps: seeing a deck of someone else's in action, followed up by building my take on it later. Imitation is the greatest form of flattery and, apparently, I really like to flatter the deck builders around me. But if you've tried to build an EDH deck you can see how imitation isn't always an option—"mimicking" a singleton deck is more akin to outright copying than artful reframing.

Pooling together a pile of fun is the core essence of EDH, and there are a lot of different takes on what's fun. Beyond big splashy spells and creatures, piecemeal combo-like synergies and stifling board control are two very different frameworks with very different goals—but also present in EDH. Fun is, really, always just what you make of it, which is why I compare EDH deck building to that of a Lorwyn boggart. 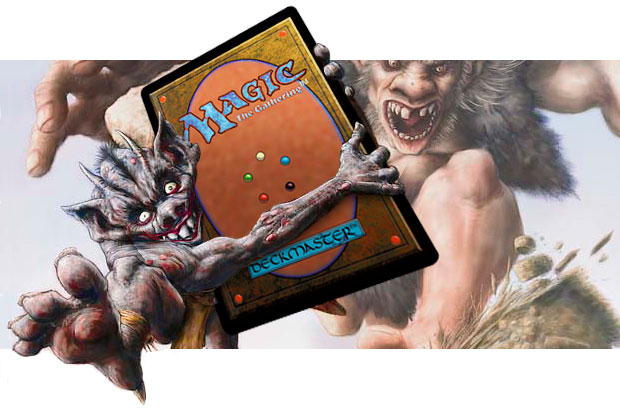 Boggarts pull a little bit of everything from everywhere and bring it back to share. They will just as happily take your dentures and toothpaste as your necklaces and rings. If it's something new to them, they will gleefully run with it, literally, and I think it's this approach that brings some of the most fun to deck building. While I could try to classify all of the different approaches to deck building using tribal analogies (a fascinating idea for another day), Goblins are on the order now. And the spear prodding me to continue might be helping too.

Perhaps interestingly disappointing is that while Goblins have been around for the entirety of Magic there are scant few Goblins of true renown, justifying their own card. I'll save you a trip to the Gatherer and give you the rundown of the Goblins that can be EDH Generals:

So how do these guys rate? I'm not sure which general is "the best," but I do know which ones look like a lot of fun.

I've seen a Kiki-Jiki, Mirror Breaker deck before, which is probably why I like him. It's fun to see all sorts of creatures on the table being copied—everything from Protean Hulk and Bogardan Hellkite to Clone and Duplicant. Of course, with an EDH deck you're restricted to red and artifact creatures (or ones you Threaten), which seems to put a damper on the possibilities.

Ib is a pretty likeable green meanie—he turns every Goblin into a quasi–Goblin Grenade against the defense, not to mention trading Mountains for more Goblins anytime they're needed. I've also seen an Ib deck, so I'm biased toward him too.

Squee, Goblin Nabob is, arguably, the most memorable and famous Goblin in all of Magic. He was a member of the heroic crew of the Weatherlight, and his story would fill an entire series of articles. His ability is famous too—coming back from the graveyard to your hand every turn makes for some fun discard effect repetition. It's a nice way to avoid having to pay the ever-increasing cost to recast him as a General, but it doesn't do much for me from that.

Slobad is another Goblin famous for his exploits, though his took place on Mirrodin as opposed to Squee, Goblin Nabob's on Dominaria, Rath, and Mercadia. Slobad seems to beg for a red deck loaded with artifacts—a big break from what red usually wants (see Shatter, Shattering Pulse, Shatterstorm, etc.). It's an interesting proposition (a mono-red, artifact-focused deck), but one for some other time.

Conspiring spells every turn? Check. Two-colored General for double the colored fun? Check. Already seen an EDH deck based around these two facts? Check. A fine General be here indeed.

The one I like most, however, is a little on the sly side: Wort, Boggart Auntie.

Returning a Goblin card to my hand every upkeep trips my long-game-recursion alarm. A healthy 3 power and toughness may not win any "biggest creature ever" awards, but she does dodge the likes of Pyroclasm and Prodigal Pyromancer—big enough.

The possibilities for a Goblin EDH deck are deep. There are far more Goblins available than you have room for in a soon-to-be warren-of-a-deck. I wanted a lot of different things so, like the boggart I am, I pulled from a variety of different sources.

As in any tribal theme, Riptide Replicator and Coat of Arms are fine fits. Cards like Dragon Fodder and Empty the Warrens help fill the board full of the little green men. 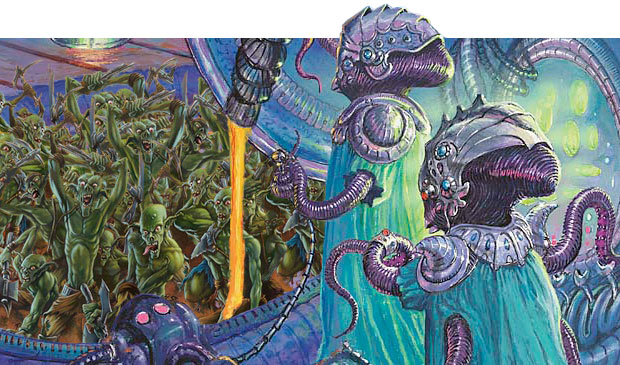 I could drone on and on about cards that support the Goblin tribe. Since we're dealing with EDH, however, I felt the need to look beyond for things a little more intriguing than "Add more Goblin; shuffle well." Our General is an Auntie, a family member, who in the holiday spirit is bringing us a gift on each of our upkeeps.

The card that drew me in was Conspiracy, which (in this deck) turns any creature you have anywhere into a Goblin, including those in your graveyard. Conspiracy with Wort opens an entire field of possibilities: cast evoke creatures like Shriekmaw, Ingot Chewer, or Spitebellows every turn, get back echo creatures with great "enters the battlefield" triggers (like Bone Shredder, Avalanche Riders, Keldon Champion, and Keldon Vandals) every other turn, and recycle creatures that can sacrifice themselves or like to see creatures sacrificed (like Abyssal Gatekeeper; Clickslither; Fleshbag Maurader; Kagemaro, First to Suffer; Lightning Serpent; and Marsh Flitter, to name a few). 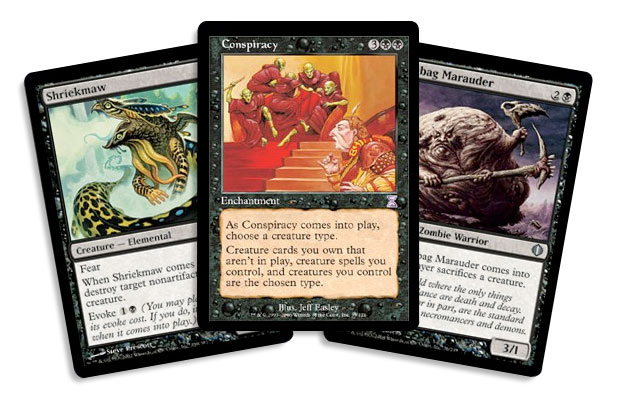 With black's abundant access to tutor cards (Vampiric Tutor, Diabolic Tutor, Beseech the Queen, and the venerable Demonic Tutor among others), finding Conspiracy shouldn't be too hard. Of course, there are more than enough Goblins that sacrifice themselves or others for effect, or have echo: Goblin Marshal, Mogg War Marshal, Arms Dealer, Goblin Lookout, and Kill-Suit Cultist all become better upon reuse—so that Conspiracy just turns on the non-Goblins for dear old Auntie to bring back to the party.

As always, you don't need anything I've suggested here. There's no need to go after anything other than what you fine the most fun. Seriously.

A Boggart's Life for Me

With virtually every Magic card ever printed (in red, black, and colorless) available to me, you might be wondering what I wanted to come up with. Unfortunately, my ideal Wort, Boggart Auntie EDH deck was lost to the sands of time (and confusing misplacement of various pieces of scrap paper I was using to assemble it).

With the seasonal break in new articles starting next week here's something to keep your fun gears churning: show me your most hilariously Goblin-themed (or other tribally themed if you prefer—whatever you find fun) EDH deck in the forum thread. I'll highlight the ones I find most entertaining sometime after the start of the new year.

If you've been itching to show what you've got when it comes to multiplayer mayhem and themed deck crafting, or want to highlight some seriously stellar approaches for the chaotic group play that is EDH, then find the boggart inside you and share it with the Serious Fun warren! We're waiting!