art of what makes Ravnica such an awesome and conflicted place are the ten guilds that dominate the plane. The series of ten color pairs, and the mechanics and themes that define them, puts a name to what many of us already enjoy most.

But what if you didn't know the game forwards and back, and the idea of adding ten more flavors of game play is the same as tripling the number of things to know? That's what it's like to be learning about Magic's essential five colors then suddenly planeswalk to the ten-guild pile up on the hub of the Multiverse. 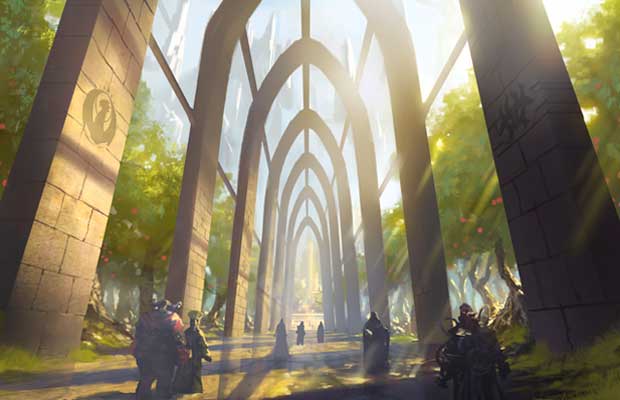 Return to Ravnica features just five of these guilds—Azorius, Golgari, Izzet, Rakdos, and Selesnya—but come January we'll be rolling right into the other half. If you're sharing Magic with some friends, this increases the difficulty for your task (getting the essentials across in a friendly and fun way) and theirs (learning all of this information quickly).

Today is how I'm going about bringing the guilds into the way I show others how to play Magic.

Before we get into guilding things up, I want to refresh ourselves with how one can teach Magic to friends. Last year, we walked through five decks, one for each color of Magic. Those decks were a follow up to our review of just what you want when sharing Magic. I've updated the essential elements

While the examples praised Magic 2012 as the place to start, Magic 2013 will work the same today. If you're trying to answer "What is Magic?" then the Core Set is the best launch point. I can't make this point clear enough: As awesome as Return to Ravnica is, its natural complexity will make your job in sharing Magic much more difficult than it needs to be.

Starting with something too complex might deter learning at all.

Consider this idea an additional pillar to add to those above:

The sharing decks I created last year included uncommons and rares. They were built to exemplify the features and flavor of their respective colors, inheriting the simplicity of using just one color and its basic lands. Since the cards were simpler, a greater variety could be used.

Sharing guilds is a little different.

For a player already familiar with Magic, moving from the color-intense simplicity of a Core Set to the colorful world of guilds can be daunting. When I looked at building decks for each guild I wanted to keep three goals in mind:

To accomplish these goals I used three major rules:

There are plenty of commons to work with, but to really achieve the third goal (ease of mana) I included the Keyrunes in each deck. These help make two specific commons shine while giving each deck two non-rare ways to help mana.

The mechanic rule shouldn't need explanation, but there is something that you should know: The moment of discovery when a player realizes that mixing guilds is awesome isn't something you should take away. Yes, Izzet decks can use cards like Inaction Injunction. Yes, the Golgari decks appreciate adding +1/+1 counters to creatures that have been unleashed.

Now that we know what these decks are meant to do, let's see just how they're going to do it.


Strengths: Stopping the game and taking over. They hold everything up on the ground, and take to the air to keep an eye on everything. "I am the law. I am the law!" 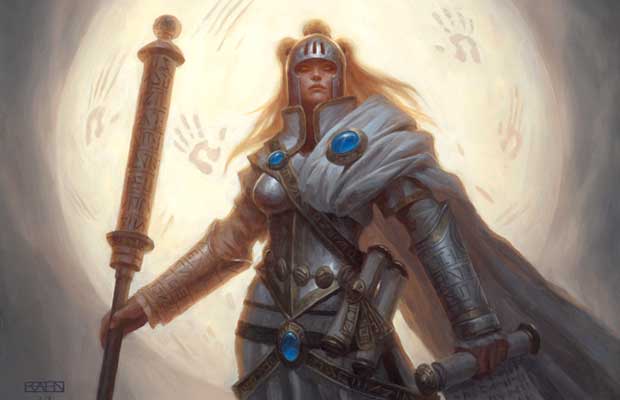 Your potential to commit a crime warrants further investigation.


Color Pair: White-blue hold the line with countermagic and defensive enchantments. High toughness can keep order on the ground. They share both quick and powerful flying creatures as the core for attacking.

Mana: Azorius Guildgate and Azorius Keyrune are the ways every guild shares in making mana, but blue gets to draw some cards. For the Azorius, stopping an opponent with Inaction Injunction also digs us one deeper.

The Azorius deck should appeal to those who like to gain control as the game goes on. Knightly Valor improves a flying creature while maintaining defenses below, and Paralyzing Grasp puts a stop to problematic attackers. It's a deck that asks the wielder to consider just how bad his or her opponent's actions are, then inject rules accordingly.

Adding to the deck can be done with great uncommons, such as the on-flavor Arrest and New Prahv Guildmage. The Prerelease promo rare Archon of the Triumvirate is a massive flier that locks away the worst offenders.


Strengths: Long-term planning for ultimate victory. They work tirelessly to get to where they want to be, and they'll blow a few fuses to get there faster. "Okay. Time circuit's on. Flux capacitor, fluxing. Engine running. All right." 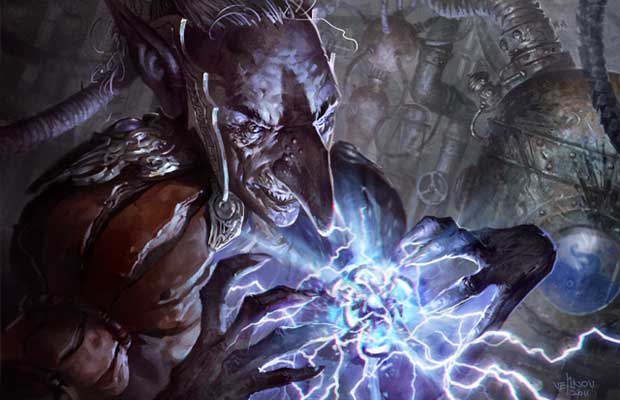 When asked how much power is required, Izzet mages always answer "more."


Color Pair: Blue-red have a knack for messing with power and toughness, as well as flying. High toughness can keep order on the ground, but with a little juice they'll incinerate you just as easily. They share some chaotic effects for opponents, as well as acceleration for their spells.

Mana: Izzet Guildgate and Izzet Keyrune are the ways every guild shares in making mana, but blue gets to draw some cards. For the Izzet, a dash of Inspiration is all it should take to get things moving.

The Izzet deck should appeal to those who like to mess around with how they win. Frostburn Weird is a great blocker early but turns into a monstrous player killer with Pursuit of Flight. Lobber Crew seems an innocuous blocker, but a few multicolor spells later and your opponent is reeling. You have choices for how to handle the game, and they are all a real blast.

Adding to the deck can be done with great uncommons, such as the namesake Izzet Charm and Nivix Guildmage. With enough planning, the grand goal of completing an Epic Experiment should excite anyone who adores the Izzet.


Strengths: Long-term strength to overpower everything. Every step is incremental, with those who fall early empowering the guild later. "I am confident that there truly is such a thing as living again, that the living spring from the dead, and that the souls of the dead are in existence." 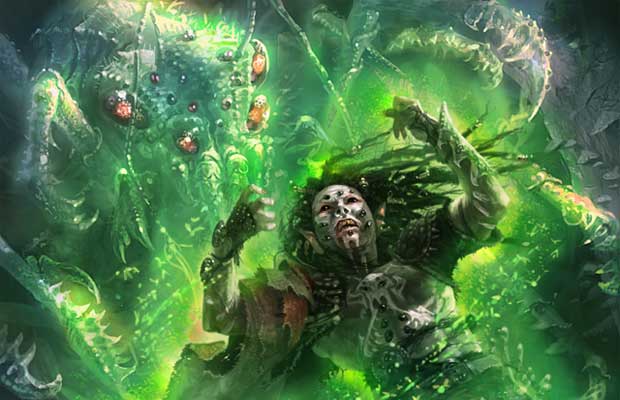 We traffic in flesh, not souls. Still, it's a shame to let anything go to waste.


Color Pair: Black-green are recursive monster makers. The size and graveyard utility of the colors are not to be underestimated, and they share a passion for being deadly at just a touch.

Mana: Golgari Guildgate and Golgari Keyrune are the ways every guild shares in making mana, but like another guild the Golgari can make great use of Gatecreeper Vine: first as a way to find land, then as fodder for a Launch Party.

The Golgari deck should appeal to those who like to hit harder and harder, with a steady stream of baddies. Trading and killing the opponent's creatures in combat empowers the Golgari to grow ever stronger ways to fight. The cycle of death and growth cannot be stopped.

Adding to the deck can be done with great uncommons, such as the killers Rites of Reaping and Korozda Guildmage. If you can get your hands on it, Lotleth Troll epitomizes what the Golgari can do.


Strengths: Short-term strength to overpower everything. They don't start slow and they won't take no for an answer. "Oh yeah? Rules? Well, rules were made to be broken. And your neck could be broken!" 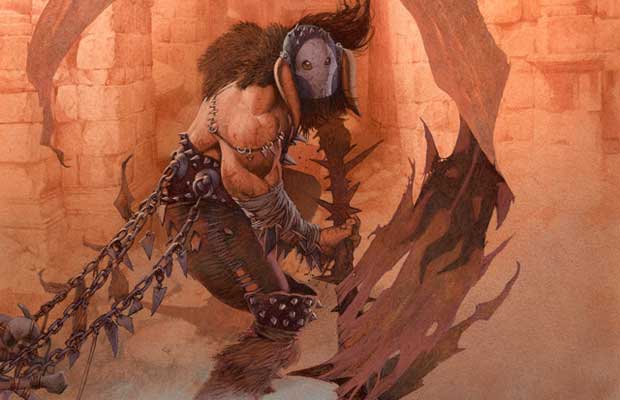 The mask isn't meant to hide his identity. It's meant to keep the viscera out of his eyes.


Color Pair: Red-black attack with bigger creatures that don't look back. High power ensures they'll deal maximum damage, and take as many blockers down with them as possible. They share some fast creatures, bigger power, and first strike fighting.

Mana: Rakdos Guildgate and Rakdos Keyrune are the ways every guild shares in making mana, but for the Rakdos they're not interested in planning that far ahead. Keeping a starting hand that can cast a few quick creatures is essential.

The Rakdos deck should appeal to those who like to get into punching contests and win. Dead Reveler and Splatter Thug are very hard for opponents to stop, and the suite of ways to reduce or outright kill potential blockers keep things moving fast. The risk of running out of power early is offset by the reward of smashing hard enough you can win before it matters.

Adding to the deck can be done with great uncommons, such as the namesake Rakdos Ragemutt and Rix Maadi Guildmage. For the ultimate spectacle of awe, unleashing the Return of Rakdos should be enough to make even the Azorius crumble.


Strengths: Tokens and token making. They make many creatures, and those creatures are awesome. "Look at my centaur. My centaur's amazing!" 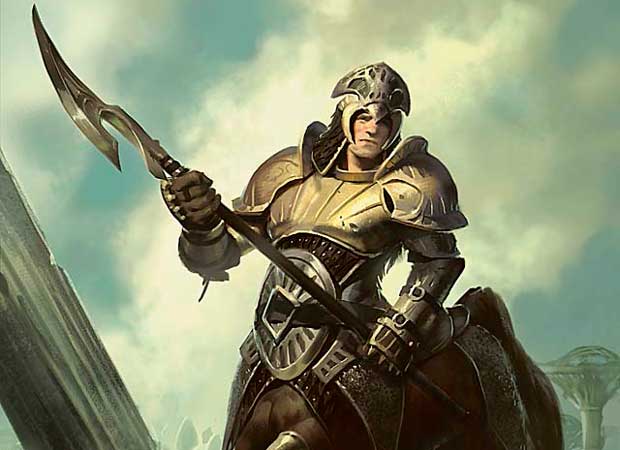 Centaurs are sent to evangelize in Gruul territories where words of war speak louder than prayers of peace.


Color Pair: Green-white pump creatures permanently, and make multiple tokens at once. They share artifact and enchantment destruction, as well as gaining life from making creatures.

Mana: Selesnya Guildgate and Selesnya Keyrune are the ways every guild shares in making mana, but green brings land searching as well with Gatecreeper Vine. (The Golgari join in here as it's a feature for every guild with green.)

The Selesnya deck should come packed with the relevant tokens: Centaurs, Birds, and even a few Rhino tokens. It's a powerful deck that plays out like it does in Limited: Slow, inevitable death by stampede for opponents.

Adding to the deck can be done with great uncommons, such as the token-riffic Call of the Conclave and Vitu-Ghazi Guildmage. The mythic rare Armada Wurm is the pinnacle of what it means to get down and dirty as an Selesnyan.

These decks are all primed for making it abundantly clear what the guilds can do. But before you get too far into building these bites of Ravnica, I have three things to caution you about.

You might only get one shot to show off these guilds and begin building your friends up to the madness of even more colors. And when they ask about "the other pairs of colors" you can point them squarely at the upcoming Gatecrash action next year.

For the year we're currently in, I asked you to choose one of the five Return to Ravnica guilds for me.

To see what I've done with this you'll have to stay tuned through the end of the year. It's a nice story I'm excited to share!

Join us next week when we lay down some new laws. See you then!