Govern More of the Guildless

deas are strange. Sometimes, they're just bad and we feel silly later for having tried them. (But we learn.) More often, the good ideas hide in plain sight waiting for their moment to be revealed. 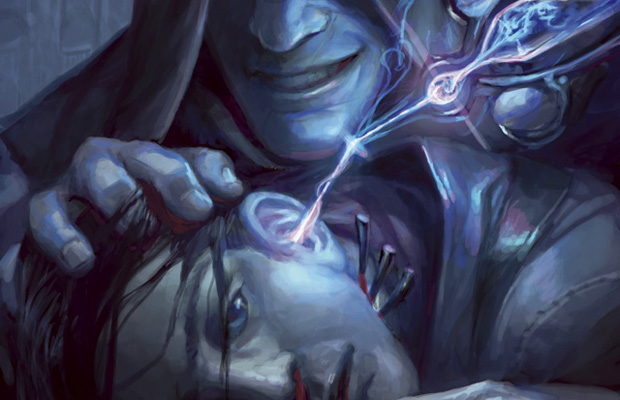 Then there are ideas that take on lives of their own. After Return to Ravnica came out I shared five guild-based decks meant for sharing Magic. The original run of sharing Magic decks were monocolored. It was fun to write and a popular article that led me to revisit with Return to Ravnica.

By all measures I have, most of you love two colors more than one.

As promised, this is the follow-up article using the five guilds featured in Gatecrash to build decks and share our game. With the guild-focused Prerelease behind us, and plenty of Draft and Sealed coming soon, this Friday's Gatecrash release is the perfect time to acquire the commons and uncommons we're going to need.

Before we jump into decks, let's review the essentials of sharing Magic. There are four virtues to keep in mind:

Sharing guilds, or two-color decks, has a few extra points to keep in mind as well:

To accomplish this for the guilds, I distilled down to three core goals to achieve:

These goals are achieved by three rules we apply to the decks we create:

The exception to using commons is the inclusion of Keyrunes. They are one of the best ways to ease mana, and while they were just fixtures of mana in the Return to Ravnica decks there is one guild in Gatecrash that can do a little more with its Keyrune.

The final idea is more subtle: The moment of discovery when a player realizes that mixing guilds is awesome isn't something you should take away. Yes, Simic decks can use cards like Hands of Binding. Yes, the Boros deck can appreciate using bloodrush creatures to punch through even harder.


Strengths: The Orzhov can alternate between two strategies, the first a more traditional deck that plays creatures quickly and attacks. The other is a deck that slows opponents down, dragging the game out as they drain life with every spell they cast. 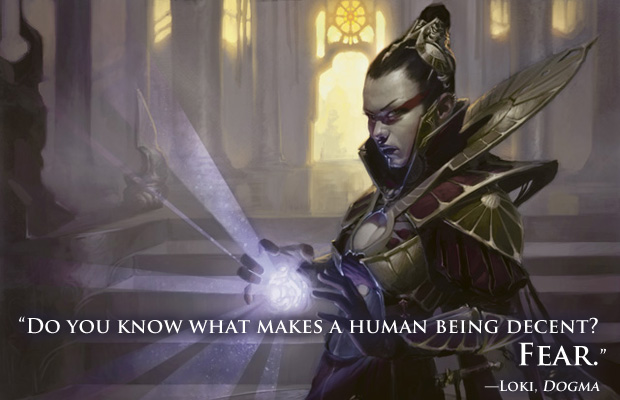 Color Pair: White-black works in obfuscated ways. While curving out by playing creatures every turn can allow early aggression, the ability to begin blocking to set up spells that trigger extort multiple times allows even simple creatures to do heavy lifting. Using removal effectively in both modes is key.

Mana: Since extort triggers can be paid with either

, managing the mana can be easier. Keeping an Orzhov Keyrune and Orzhov Guildgate at the ready leaves many options open against an opponent. Beckon Apparition can be a power play at the end of an opponent's turn, when you can net several extort triggers you can pay.

The Orzhov deck should appeal to anyone who wants to slowly take over the game. Attacking early before settling into a defensive, life-draining strategy allows the Orzhov alone to determine what happens next. Executioner's Swing and Grisly Spectacle can kill just about anything, but Basilica Guards and Dutiful Thrull can stymie opponents' attacks just as well.

Adding to the deck can be done with great uncommons such as Knight of Obligation, which gives you the best of both aggressive and defensive worlds, and Vizkopa Guildmage, which transforms average attackers into a deadly force. The Prerelease promo, Treasury Thrull, is an impressive fatty that can return smaller spells to your hand, where they matter most for extort.


Strengths: Sneaking past defenses and interrupting opponents' plans are where the Dimir excel. Carefully moving forward while keeping an opponent back is an appealing art to behold. 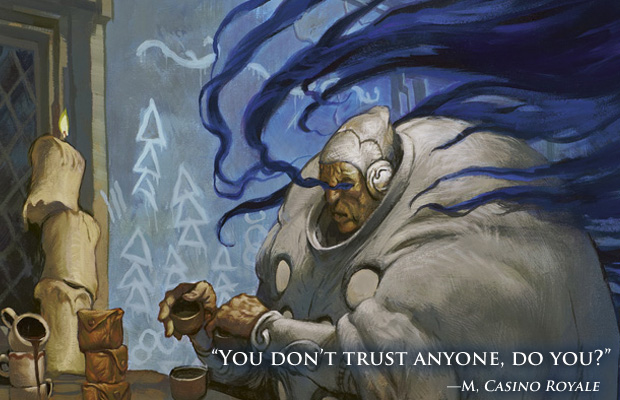 Color Pair: Blue-black relies on smaller but trickier creatures to get its work done. Attacking to victory is still the plan, but using delays well is crucial. Cipher is a powerful way to focus on the former but maintain the latter. Reusing spells repeatedly will keep the Dimir ahead.

Mana: The Dimir have an easy mana mix, balanced between early blue and black options, as well as more complex options late in the game. One of the most powerful interactions is with Dimir Keyrune: Turn it into a creature, cast a spell with cipher, encode the spell onto the Keyrune, and attack to cast the spell again. Dimir Keyrune stays encoded with the spell so you can copy it again every turn you can activate and attack.

The Dimir deck should appeal to players who have already had a taste of Magic and feel confident in their decisions. Timing cipher spells to both delay your opponent and follow up with a good attack the same turn takes patience and skill. Hands of Binding and Shadow Alley Denizen can keep a path clear, while Mortus Strider and Psychic Strike can put up resistance if an opponent tries to overload the battlefield with creatures.

Adding to the deck can be done with great uncommons such as Dinrova Horror, which can stop an opponent in two ways at once, and Dimir Charm, another guild-based toolkit-in-a-card. The Prerelease promo is Consuming Aberration, a card that pulls the direction of the deck away from delaying and attacking with encoded creatures. Cards like Duskmantle Guildmage and Paranoid Delusions, along with other cards that mill, can transform the deck completely.


Strengths: The Gruul are similar to the Boros in that they love to attack. The difference is that the Gruul not only want to attack now, but can do so very well. Dealing as much damage in as little time as possible ends games before they even begin. 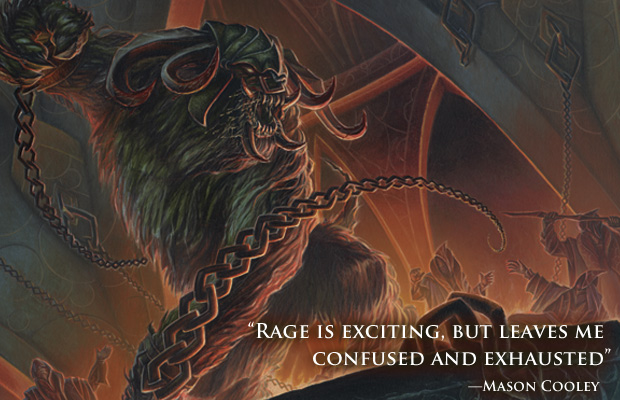 Color Pair: Red-green is a powerful mix of aggressive creatures and combat tricks. Even better, bloodrush turns many Gruul creatures into combat tricks as well. A well-placed Mugging or Pit Fight can open the door to dealing a ton of damage in one turn. Wildwood Rebirth does double duty, regrowing a creature for a creature's sake, but also returning anything with bloodrush to serve as a trick.

Mana: Red-green wants to play as many creatures as quickly as it can. Once an army is assembled and attacking, the lands unused allow the tricks to do their work. Gruul Keyrune creates a creature with trample, a useful feature if you have a Zhur-Taa Swine or Scorchwalker in hand. Getting Ruination Wurm into play should help end the game if it goes long.

The Gruul deck should appeal to anyone who loves to attack recklessly. Sending in creature after creature, using tricks to win combat each time, lets you outrace opponents' plans. Once creatures are hitting home directly, Scorchwalker can end the game even faster. Disciple of the Old Ways can trick opponents into not blocking, and turn bloodrush into a sure-kill spell when they do, thanks to optional first strike.

Adding to the deck can be done with great uncommons such as Ghor-Clan Rampager, an efficient creature with trample that provides a supercharged Colossal Might, and Viashino Shanktail, with more first strike to keep ahead in combat. The Prerelease promo is Rubblehulk, a creature with bloodrush that has obvious uses.


Strengths: The Boros, as a military force, have some of the best attackers. Marshaling forces and rallying solid attacks is their strategy. It's also a good one. 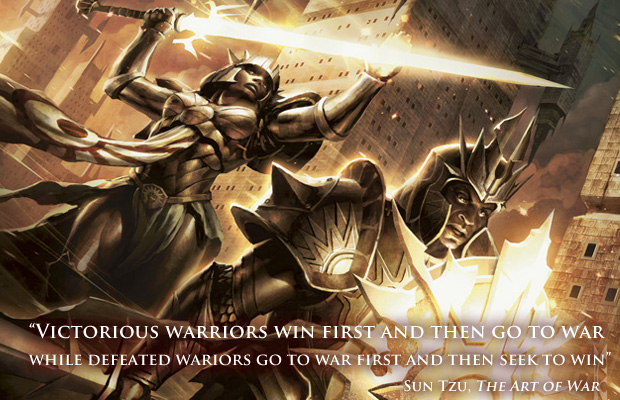 Color Pair: Red-white set up powerful attacks, backed up by removal and burn spells. While it's tempting to always just attack, a smarter leader sets up devastating attacks that force bad blocking by opponents or creates them with a combat trick.

Mana: The Boros are unusually mana intensive compared to other guilds. While you'll ideally want

available on the second turn, it gets easier as the game goes on. Boros Guildgate is a great way to keep battalion active and makes a devastating combo with Martial Glory or Aerial Maneuver.

The Boros deck should appeal to anyone who loves to attack successfully. Creatures like Ember Beast and Skyknight Legionnaire can be difficult for opponents to handle, while Mugging and Aerial Maneuver can change what opponents can block with. Daring Skyjek and Wojek Halberdiers are impressive when assembled in line together.

Adding to the deck can be done with great uncommons such as the curve-pushing Boros Elite and the toolkit that is Boros Charm. The Prerelease promo, Foundry Champion, is a fantastic way to cap out a grown army, and serves as a formidable creature in its own right.


Strengths: The Simic adapt and grow. While they start slower than other guilds, as the game progresses their strength becomes impossible to overcome. 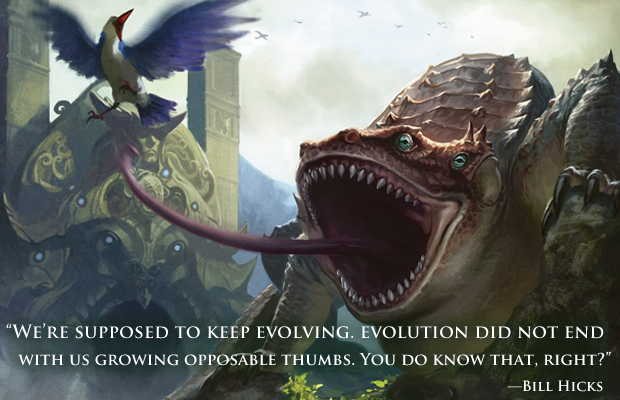 Color Pair: Blue-green combine the worlds of blue's intelligent change with green's primal power. Chaining evolve creatures in a good order creates a powerful army with hardly any work. While the goal is to play creatures, thinking about how and why each is played is important.

Mana: The Simic want to have their mana settled as quickly as possible. To play creatures like Shambleshark and Drakewing Krasis early,

is desirable on the second turn. Cloudfin Raptor and Crocanura can fit into the plan around these well if the early mana is solid.

The Simic deck should appeal to anyone who wants to feel smart with the best creatures to show for it. Evolve is, literally, what the army will do. Shambleshark can appear as both a combat trick against a fast opponent or an end-of-turn trick before Drakewing Krasis or Frilled Oculus. Ivy Lane Denizen and Burst of Strength keep the +1/+1 counters flowing even if evolve dries up.

Adding to the deck can be done with great uncommons such as Experiment One, which ensures plenty of early creatures ready to evolve, and Zameck Guildmage, letting a flurry of creatures thereafter enter one step into their evolution. The Prerelease promo, Fathom Mage, is the type of evolve creature you love to see stick around. Drawing extra cards for playing creatures is a powerful play in evolve decks.

These decks are wonderful ways to show anyone new to Magic just what the latest guilds can do. But the same caveats as before apply:

Between the ten guild decks we've created, finding the right feel for anyone is possible. Whatever somebody enjoys about Magic is exemplified on Ravnica, and Gatecrash has finally brought us the rest of the story.

Join us next week when we finally, finally, get to the guild I love most for the first time in more than seven years. See you then!