ome of the necromantic practitioners on Innistrad would put me to shame. They don't waste things. Bits of tissues, bundles of bones, and a bevy of pieces and parts become things monstrous and terrifying. 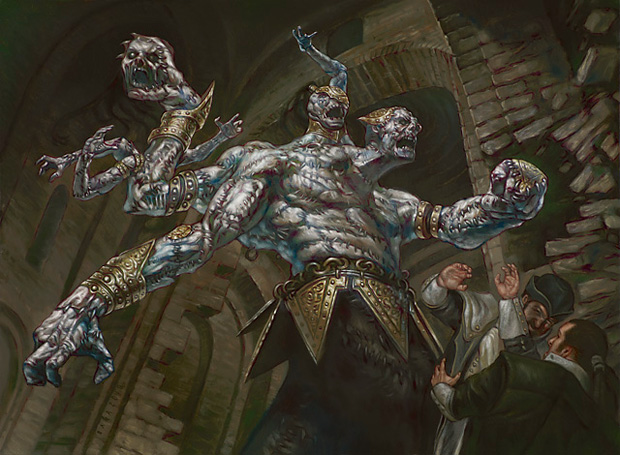 It's Graveyard Week, a time to recall fondly the things buried deep and shallow. It wasn't long ago that I shared some ways to game perpetually, or at least longer than usual. Our trip through Undead Week was focused on being the Zombie. This week we're going where those who rise again come from.

It's time to grab a shovel.

The first graveyard we'll visit is one that we all cultivate. It's usually a combination of deck boxes, sleeves, and every flat surface where we can set things. It's also the last place I always look for anything missing.

Tell me what you don't see in the following pile I discovered.


If you said any of the following you'd be right:

This is a deck that has been hanging around the fringes of my mind for almost a decade: mill. I used to really, really like my mill deck, and it's clear I pulled the blue-black lands out, leaving the "detritus" behind. It's like I poached it just for the ivory.

It's also obvious I'd given it a face lift around the era of Magic 2010, but the missing lands and boring monotony of the deck are clearly problematic. No problem; we can stich something better together. The way I've begun to build decks is a tip I picked up from mover and shaker Kelly Digges (who learned it from Tom LaPille, who in turn learned it from Aaron Forsythe) when he shared it with the world: build 60-card casual decks, using two different four-ofs and the balance in singletons.

For the boneyard collectors of deck scraps, new purpose has come to scraping the soil. 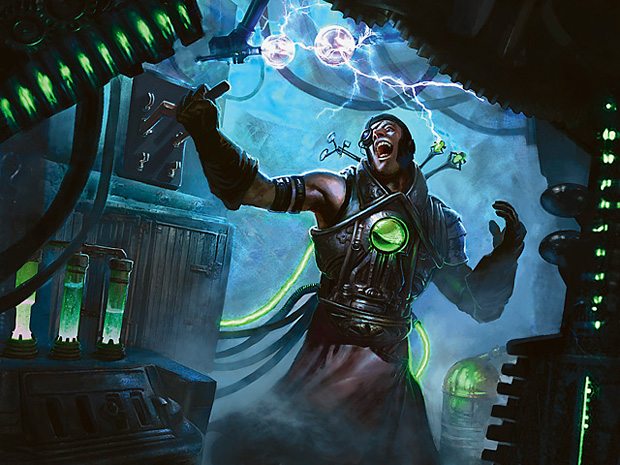 Innistrad brought us plenty of ways to work with the graveyard, many of them fortuitously in blue and black. The one card that I knew should come out to play here is Laboratory Maniac. While Noel de Cordova shared a surreal experience he encountered by looking library oblivion in the face, our purpose here is much more mundane.

Milling others can be quite unfun for them. Instead of pointing our weapons of library erosion at others, we're going to set our jaws and take the blow ourselves. It helps that we'll enjoy it.

And following the Forsythian formula, we need another four-copy reagent. Recalling from the buried days of yore, I know that the worst thing that can happen to a mill deck is running out of ways to mill cards. Innistrad handled that circumstance through Nephalia Drownyard. Now there would be no way to totally stop the process of losing your library.

So how do we fill our graveyard up? I did some scraping and came up with a bucket of ways:

Each of these is a classic or modern way to reduce our library total. Many of these have passed through my hands at one point, and I know they have some specialized uses.

I also knew that I'd want some creatures, and there are plenty that keep us on track:

Many of these come with a more mundane purpose of blocking other players' creatures (Armored Skaab, Soratami Mindsweeper, Belltower Sphinx, and Selhoff Occultist all suit well) and repeatably grinding a library down (Mindshrieker, Ambassador Laquatus, and Drowner Initiate are my personal favorites there).

Many other players' game goals will be to attack, and trying to mill yourself is an easy way to become a punching bag. Dropping some speed bumps can make a huge difference!

With plenty of ways to rip up our library and stay alive doing it, let's throw some flashback into the mix:

Let's be absolutely serious for a moment: we get to play with a card titled Bamboozle and keep a straight face. (Hooray!) A few defensive spells and other ways to get cards into hand make this set a fun little utility group. Snapcaster Mage may be a bit surprising, but after the first time you flash back Glimpse the Unthinkable or Mind Funeral you'll become a fan (if you weren't already).

So what's the final result?


For a goofy deck that's meant to apply self-inflicted memory wounds, I find that all piled together it looks a little suspect. That isn't a problem—I know some players locally that think this mish-mash is perfect for playing with—but if you have some thoughts I'd love to hear them! There's no reason to avoid making adjustments... as long as we're not talking about changing anything to be included more than once!

Between flashback, milling, and all sorts of common recursion (like the seen-everywhere-these-days Unburial Rites), it's easy to forget the graveyard can be a practical way to keep a library full. Another graveyard of decks is the mundane graveyard itself. Most decks consider the graveyard a final resting place, beyond the reach of the cards you play. Some decks look to reuse and extend the life of things. 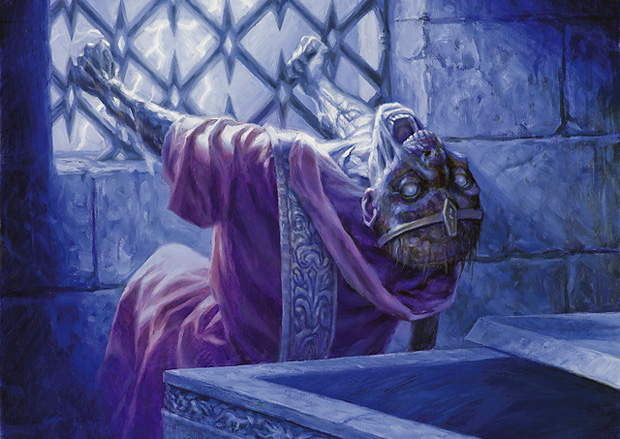 Then there are decks that wholly recirculate a graveyard for endless amusement.

Still following the diversity-forcing requirements outlined above, I wanted to build a deck that constantly shuffled the graveyard back into its library. Picking the right card to include as a four-of was something of a shot in the dark, but I settled on Reminisce. It's easy to cast, and it cycles the previously used copy back into the library.

The other side of the coin was filled by Krark-Clan Ironworks. This puts something (artifacts) into the graveyard, and gives us something for doing it: mana. This is an exchange I can appreciate, and find plenty of suitable ways to use it:

More cards keep things moving, and big things are the end result of our hard work. These aren't complicated or clever, which is refreshing compared to the way we have to get to use these.

Fast creatures, faster mana, and a penchant for the cheap all drive the nuts of the deck. Without a few creatures we wouldn't have any way to defend ourselves, and without cards like Gemstone Array or Mox Opal we may run into trouble making the color of mana we need.

A good interjection here is that I decided to stick to blue to avoid many issues with having cards in hand but lacking the mana to cast them. All blue is easy to do, but sprinkling in red (for something like Empty the Warrens or Grapeshot) or black (to perhaps include Ad Nauseam) isn't out of the question. Do what you want!

Speaking of colored mana, here are the ways I plan to make sure they get there:

We should have no issues with blue mana, or any color for that matter. Generating oodles of mana, forever reusing everything we throw away; this is exactly how an industrious Stitcher should work.


Casting a dozen spells in a turn is more than possible once the engine is revving, and eventually landing a well-oversized Orochi Hatchery is certainly a dream I've held for some time. Feel free to suggest and adapt as desired, just don't forget to share your thoughts with everyone too!

So what's this all about? Messing with graveyards? Ignoring them?

Thanks to my assiduous play of the Commander format, using (and abusing) graveyards is second nature to me. Thinking about "a reanimation deck" is like bringing up Wrexial, the Risen Deep as a commader-to-be. I've been there, and we've done that. Building other types of decks, with different goals and plans, than the usual Commander fare is important for me too. And I believe you agree with that. 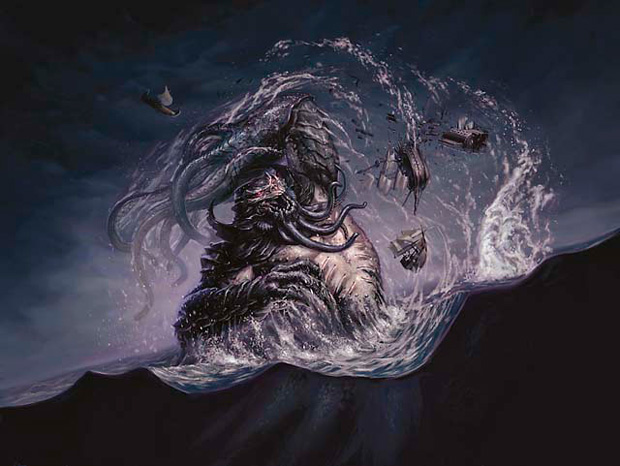 More importantly, these decks do very powerful things (destroy a player's library and generate obscene amounts of mana) but don't make the game unfair for opponents. It's a tricky line to stand on, one that moves and shifts with every player, but getting to engage in something you really enjoy without making it unpleasant for opponents is the sweet spot for most games of Magic.

It isn't that tuned, lethal engines of winning are bad, but that setting it up as a two-way highway is good. After playing with the Magic: The Gathering – Commander decks as well as those in Duels of the Planeswalkers, my appreciation for the art of not-necessarily-elegant-yet-entertaining deck construction has swelled.

The goal of building a deck using just two four-ofs and scrambling to fill the rest isn't to make every deck weak, awkward, or just plain bad; it's to provide just enough to a consistent theme while leaving plenty of room to explore and experiment. I wanted the scope of graveyards, and I found two very different ways of looking at it with just four build-around cards.

I don't have a clever name for this method, and I clearly cheated in the second deck—Blue Sun's Zenith, Stroke of Genius, Mind Spring, Braingeyser are all the same card really—but applying "the Forsythian Formula" has made creating a new deck a wonderful thing. The decks are messy, volatile, and ornery to handle, but the wonderful fun of having a plan but figuring out how to get there as you go is almost unbeatable.

Whether it's with a graveyard or some other part of Magic, you can find the most delightful of ways to get something different going! This leads me to this week's poll:

Last week's poll is certainly related to these ideas.

I was actually expecting this number to be smaller; the "design by box" method isn't something I've seen regularly, though I suppose that may have something to do with me not peeking in all of your windows as you build decks at home and just perusing the tables at stores and events.

I admit, carrying around a thousand cards set up in sleeved brick-boxes gets tiresome. I just also think it's totally worth it!

Join us next week when we witness the clash of the titans of Innistrad. See you then!