science experiment for us all:

In our best laboratory, with our finest material, what can we make with an Ancient Ooze? 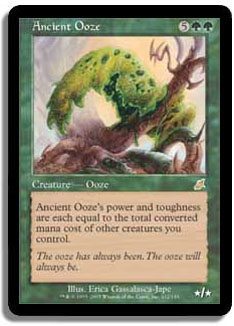 No, you're not going to win a tournament with this. That's not what I mean by this science experiment.

What I mean is, what are the universal limits of a deck that uses four of these? Are we doomed to the fate of Dr. Frankenstein wannabes, creating cute but deformed Marshmallow Peep decks? Or can we create something with a bit better stitching?

There's only one way to find out.

Fair warning: Unlike the past couple of weeks, I don't offer alternatives for the rares I suggest in these decks. Of course, there are always substitutions that work here and there, but with this card, you're either playing with eye-popping cards or trick cards—both of which tend to be rare, so no apologies.

THE RELENTLESS MARCH OF THE MARSHMALLOW PEEPS

I regret the second Marshmallow Peeps reference right there, but you have to realize I'm writing this a while after Easter, and the Marshmallow Peeps are still in my house. For more information on Marshmallow Peeps—I have no idea if these exist beyond America's borders, or if the rest of the world is unblemished—see peepresearch.org. There is a point where a Marshmallow Peep undergoes, and I quote, "a metamorphosis . . . the subject entered the stage which scientists call 'ball of charred goo'." Goo = ooze, and peeps are often ancient, so we're on topic here.

The first deck is a standard "wow, look at those creatures!" deck.

Play creatures at instant speed from your hand or your graveyard. At sorcery speed (and triggered ability speed, as someone kills your Elvish Piper with a Pattern of Rebirth), play them from your library. Naturally, you could add Living Wish and go get them from outside of the game; but that seemed a bit much to get us started. The point is, you can make the Ancient Ooze much bigger at a reasonably fast clip, and use 1x your favorite green rares. (Or Dragons. But we did Dragons two weeks ago, and I never see Carnassid in a deck.)

Props to Jamie Wakefield, Dojo writer of old, for the Natural Order - Sliver Queen trick. I still love this one. Terrific when your opponents are playing Slivers. (Sliver Queen is a green creature.)

For a more extreme version of the "instant" ploy, consider less expensive, but faster, creatures:

Caller of the Claw has mixed feelings about Ancient Ooze. The Bear tokens don't really help the Ooze—but at least the Caller does, and if nothing else, you'll get a couple of Bear tokens for those (I daresay frequent) times when someone will kill your "other" creature, thereby reducing your Ooze to 0/0.

While building this decklist, I also briefly considered a Rebel “recruiting” chain, since it would send clear signals to the board as to just how much you could shift the Ooze. But then I thought about Unnatural Selection and Conspiracy, so that Ooze could be a Rebel, and from there I latched onto the idea of "tribal" decks, and then I just got so excited that we almost have enough Oozes to make a tribal deck (you need 30 for the informal format, and I had to "cheat" just to get to 24), that I forgot about that Rebel thing:

Get it? Greater GOOd? Mun-dun-GOO?

Anyway, what potential for a mana train wreck! I believe the good people of Jamuraa said it best when they saw the Mwonvuli Ooze and said, "Ewww!" But hey, tribal is tribal.

SO ARE WE REALLY GOING TO MAKE THIS WORK, OR WHAT?!

Okay, okay, enough. Can Ancient Ooze actually fit into a deck that doesn't just make cute peeping sounds? Does it fit into a multiplayer deck with a chance of coming out on top?? Is it a viable contender???

4 Caller of the Claw

More on the Scornful Egotist at a later date—but for now, it's enough to know that the converted mana cost is large.

This actually shouldn't do so badly. Early defense is a problem, but down the road, you can have a good deal of fun with Bribery - Unstable Shapeshifter, Bifurcate - Ancient Ooze, Caller of the Claw - Clone, and Psychic Battle - everything. The Rhox is in there because I'm not sure you're going to win any other way . . . but feel free to surprise me!

Speaking of Bribery (and getting back to cute decks that peep, as if we ever really left), there is such a thing as a "creatureless" Ancient Ooze deck. To wit:

Please, in the name of all that is good and green on this earth, do not go out and buy a bunch of copies of Karn's Touch and Titania's Song because you believe this deck will make you a star.

In an earlier draft, I had a thing in there with Rakalite - Tawnos's Coffin - Karn's Touch - Risky Move, but that was too, er, powerful.

How about that Dominate - Ancient Ooze synergy, eh? You can't get good tech like this from just anywhere, you know.

You can only get it from the mouths of Marshmallow Peeps.

Anthony may be reached at seriousfun@wizards.com.