The Greatest Game Yet to be Played

hat makes one game of Magic "greater" than any other game? Like any subjective, opinion-rooted question, there will be a vast disparity in answers, all of which are correct. Some of you may value a grueling give-and-take, edging closer and closer to the ultimate victory—win or lose. Others may value incredulously implausible plays happening repeatedly, especially when it's something wacky but ultimately harmless for everyone involved—even if it makes the game last far longer than normal. 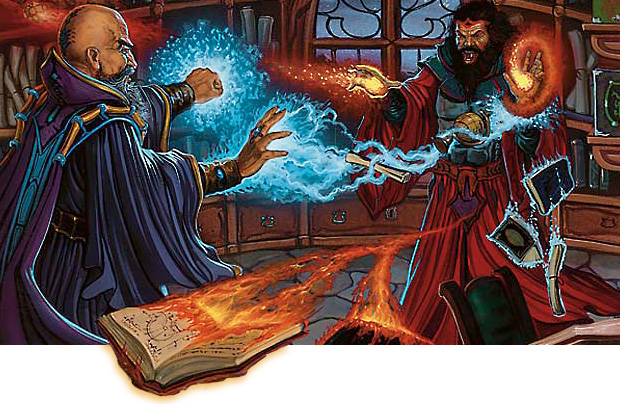 While the nebulous and varied nature of our values will change what we perceive as "the greatest game" of Magic, it's important to realize that pursuit of that game can be a wonderful way to gather gaming inertia. There is one way to pursue an ultimate game of Magic that may intrigue some of you. I've received quite a few messages about "Two-Headed Giant Emperor" and "EDH Planar Magic," and I must admit that I've tried some of this layering myself.

If you've been looking for something new, something interesting, something different, or even something comfortably familiar you may be missing out on the easiest way to get more bang for your Magic format and variant buck: layering.

Please Hold On to Your Firmly Secured Rules at All Times 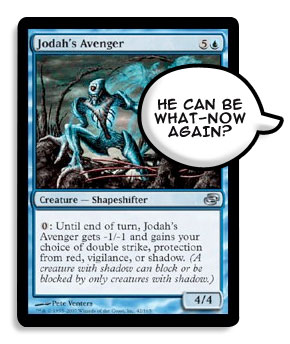 Layers, as referenced in section 613 of the Comprehensive Rules, are a necessary evil as a result of the various interactions possible in Magic (as your local judge about Humility for a brief primer). However, the layers I'm referring to are meta-game layering: the art of playing by the rules of multiple formats or variants of Magic simultaneously.

This isn't as uncommon as you may think at first: Two-Headed Giant Sealed Deck is a common Prerelease event. Rotisserie Block Draft takes the idea of drafting into building a Block-legal deck. Group Game Draft takes drafting into the realm of multiplayer interactions and politics. What's important to recognize is that virtually every way to play Magic can be pressed against another way to create something new and often surprisingly different.

Let's review some ways more or less most of us make decks for Magic:

While casual Magic revolves around multiplayer games at least as often as it does dueling, most formats are geared towards dueling. 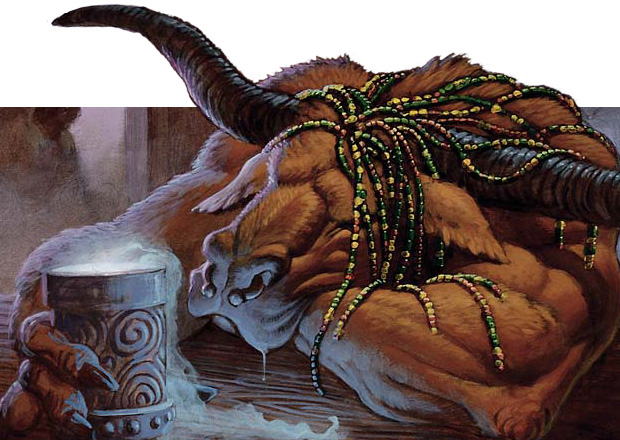 Since the earliest days of Magic players have developed unique and interesting ways to build decks for the game fighting the malaise of stagnant gaming:

Of course, exploring all of these ideas isn't scratching a new ground. There is over 15 years of trial, error, and resounding success in exploring the art of the possible. And so even more complicated forms were created:

I could go on but you get the point: as diverse and unique as cards are, the ways and means of playing them are just as varied. As I mentioned above some of you have a real penchant for the really crazy stuff—the stuff of nightmares for judges and learning curves. Here's a grid that visually charts how well some of these crazy things potentially overlap:

While I list EDH as a stand-alone type of variant, it's more of a format-variant hybrid monstrosity that I included because it's so popular. EDH is required to be a Singleton format, but it doesn't mix well with rarity restrictions outside of "Bling" (all rares / mythic rares; Peasant EDH is possible but very limited in choice in Generals) and doesn't play nice with Limited environments (try drafting a 100-card singleton deck from a few packs of cards), but creating a monocolored EDH deck can be an interesting exercise. 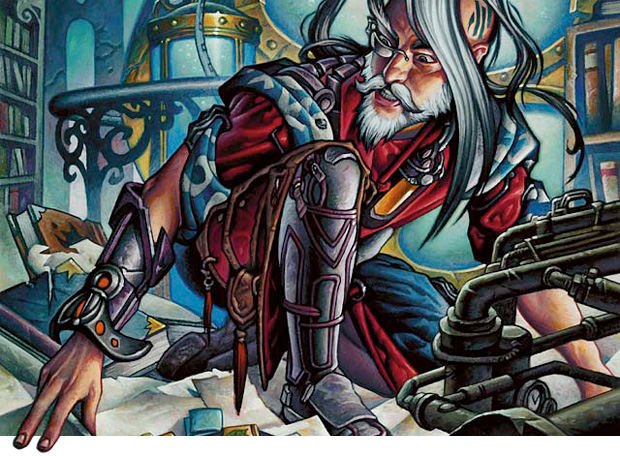 All of the other variants play well with format restrictions, though Emperor can be a little dry in Limited due to, well, limited variation in decks. Going further, many of these can be mashed together again, creating an Nth layer dip of Magic fun. For those seeking ridiculous thrills, try some of these exotic concoctions:

Of course, I'm barely scratching the surface of what's out there. Kelly Digges's Respawn Magic, the Stack and the Cube, Type 4, and dozens more of truly wild and untamed way to play roam, waiting to be tamed by you. 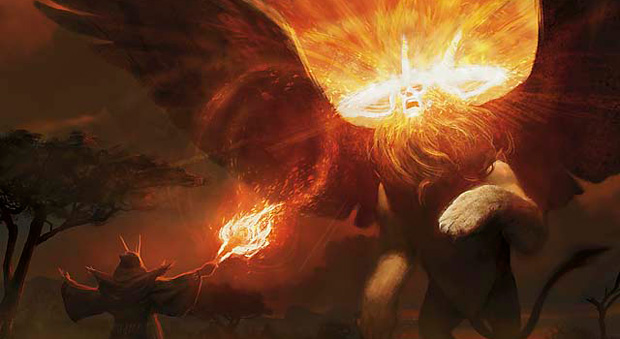 So here's my first challenge for everyone: what absolutely insane format would you like to see a game of?

I promise a bountiful bevy of beefy Magic goodness after the next few weeks are finished.

The Foil Lining Seals in the Flavor

Since it's Draft Week, I'll grab an ice-cold glass and—oh, I'm sorry. Draft Week is all about everything that makes packs of cards go "Boom!" in your hand. There's just something satisfying about opening a booster pack, even if I have to immediately attempt to decide which card I really want to keep out of it. 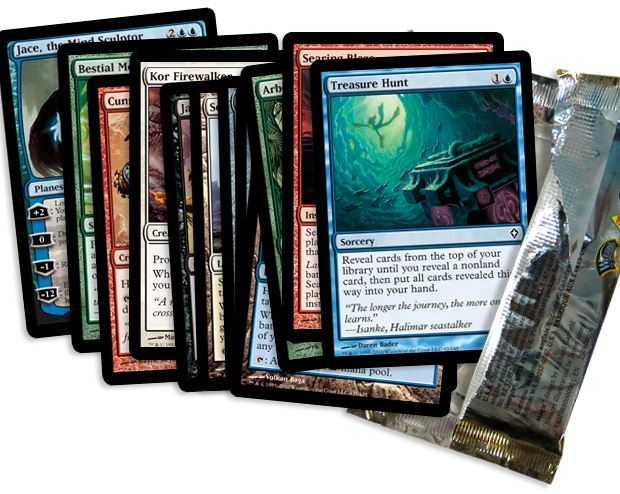 But there's more to draft than just an excuse to crack packs (a mighty fine reason if I do say so!) and make decks. I've touched on different forms of drafting but since we're already in the hunt for more and varied ways to play Magic here is a brief review of draft formats:

And all of these can be played in an incredibly fun way: Rotisserie Draft. Kelly did a great job covering all of the awesomeness that's involved in a Rotisserie Draft so I don't need to harp on it further. However this is another variation on drafting some of you may find fun: "Pick-Your-Packs" Draft. It works as you might expect: when sitting down for a draft you pick whatever packs you want instead of a more traditional series of packs. 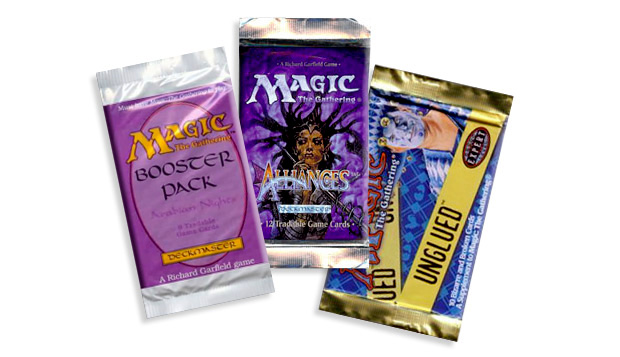 If your "Wait, doesn't that make it really, really random?" radar is going off, it's because it absolutely does. However, it's not actually as crazy as it sounds. There are rules that govern the essential content of every set: creatures, removal, buffs, and other standard fare are always present; it's just a little more eclectic of a selection to choose from.

As you may have surmised, I had the chance to engage a store full of drafters in this self-randomizing format and the following sets were represented by at least one pack:

And in all likelihood I missed a set or two represented by a pack or two in the other draft pod (I recall seeing boxes of Judgment and Nemesis sitting around too). Unfortunately, my deck didn't survive intact but I have a few highlights you may find interesting.

I played against a deck with both Baneslayer Angeland Kalonian Behemoth (yeah, I lost that one); a deck with four copies of Essence Scatter (so that's where they all went!), and a deck with two copies of Doom Blade and two copies of Hideous End (my black creatures were pretty safe there). There was also my buddy Shawn, edging me out for third place, who had Empyrial Plate for his turn-one Pulse Tracker—pretty sweet, I must say.

The same principles of surprising interaction apply for more conservative pack mixing. Consider the unlikely combination of two packs Future Sight and two packs Worldwake for a Group Game Draft. Here are some of the awesome interactions between these far-flung sets:

And this is my second challenge to you: What sets would make an awesome Pick-Your-Pack?

Sound off with what you think and tell me what hidden goodies you think may be lurking deep within the recesses of mixing, matching, and layering together every which way of Magic game play. Join me next week when the Eldrazi return to continue assaulting your screen.