Heart in a Cage

elcome, scattering Mirrans and glorified Phyrexians, to the first preview week for New Phyrexia! I can't really express how excited I've been, waiting with bated impatience, to dive off the deep end into glistening oil. From the innocuous months ago during Scars of Mirrodin to my current compleation, I've been fighting the dark fight for a new Phyrexia.

Which is exactly what we got. 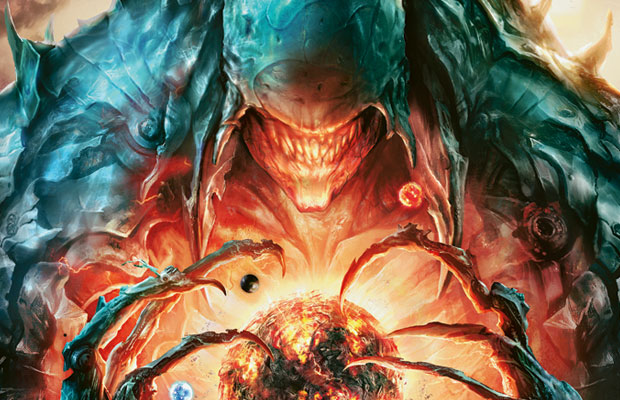 Phyrexians mustered and marshaled the power required to conquer a plane. Through the dark depths of the core of Mirrodin, the Phyrexians demonstrated power overwhelming. One slice of New Phyrexia's power is exactly what I'm going to touch on today.

Under Cover of Darkness

Power is an appealing concept. Having it means strength, stability, and the ability to exert influence on the world around you. What is, and isn't, power has changed over the years in Magic. Sometimes it was increwdible artifacts. Other times it was spells that could be played for free (Or profit!), or creatures that always ended the game.

One facet of power that has remained unchanged, however, has been the access to abundant mana. While there are several cards that provide explosive access to mana, there are two that really stand out among the many: Mirari's Wake and Gauntlet of Power.

Mirari's Wake is an impressive enchantment. Not only does it pump up all your creatures, it doubles the amount of mana just about every land produces, and it does this without sharing any of the power with your opponents. The only real downside is that this costs both white and green, making it tricky to include in decks that aren't running those colors already.

It's this card's strength that makes it a highly sought-after holy grail around my local game store. For example, it took me over a year and a half to find one for trade and actually make the deal happen!

Similar to Mirari's Wake, Gauntlet of Power provides a boost to creatures and mana. However, the function of being an artifact (and more universal to use) here means that the features are shared among all players: everyone gets to use what they can from the Gauntlet. As an added twist on top of this, the mana feature only works for basic lands; that's easy to build around but limits you flexing your full deck-building desires.

These restrictions, however, haven't held back the little mana-empowering arm protector. It's a regular feature for most of the Commander decks of one color I've seen. And in the hundreds of multiplayer decks I've seen over the years, Gauntlet of Power is a card that shows up with measurable regularity.

Phyrexians, if you haven't noticed yet, like to "improve" things. They call this "splicing," and it's their constructive process of adding features to an existing entity. For Phyrexians, being inadequate means only that more "innovation" is required. Adapting, altering, and hybridizing the feature from something similar or superior can create a unique, but highly synergized, thing.

So you can imagine the covetous gazes they must be giving this vestige of Mirrodin from the Card Image Gallery: 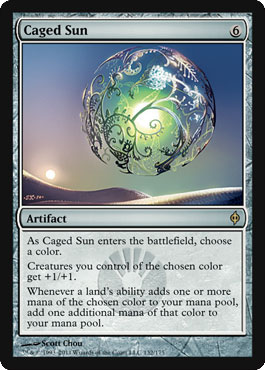 Don't let the Mirran watermark fool you. Caged Sun is exactly what every Phyrexian believes in: something that is, or was, refined to perfection, compleated. In this case it takes the best attributes from both entities: 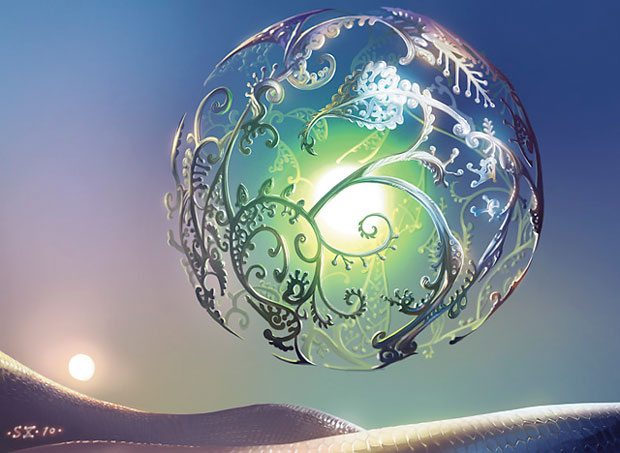 The obvious question now is "So where do we use this piece of hardware?" and I have an obvious answer for that:


While I've shared my favorite Commander list before, I regularly receive requests for an updated list. Apparently, new cards come out and "everything may have changed," so here's proof that it isn't always the case.

The main reasons why I'm going to be putting Caged Sun into my Rhys deck are the obviously apparent ones:

Anywhere that Mirari's Wake and Gauntlet of Power would already fit well, Caged Sun is going to do that job almost as well or even better. It's just that simple. (And you have your obligatory deck list update, with a few additional adjustments to make it legal for Commander on Magic Online... after New Phyrexia releases, of course.)

But to just dump Caged Sun as "another awesome Commander card" is to fail to realize its full potential. We are discussing Phyrexian perfection here, right?

4 Hand of the Praetors


Yes, it's "a poison deck," but there's a little more to it when Caged Sun is added. The initial plan is to drop infect critters and begin some swarming on the offense. Both Distortion Strike and Morbid Plunder help fuel a little resiliency along the way.

While it isn't unusual to see Contagion Clasp in decks, Contagion Engine is a little more esoteric. Propelling these two as really handy inclusions is Caged Sun; by playing it set to black, Caged Sun makes every one of our Phyrexians a little more infectious while providing the mana to proliferate multiple times, assuming multiple Clasps and/or the Engine, in a turn.

For a similar take, try swapping black for green and building a Phyrexian force that way (which is something similar to what I did back here).

The End Has No End

While Phyrexian machinations will continue to dominate deck construction over the next few months, this Mirran hold-out can and should be put to non-Phyrexian use. Consider Grand Architect and the implications of even more mana.


Mana ramping is open to any deck with Caged Sun, and a deck I've been thinking about for some time coalesced around it. Grand Architect is like a Rofellos, Llanowar Emissary of sorts. Trading tapping a few blue creatures for casting, or empowering, sweet artifact creatures is like something out of a mirror world; usually it's green that provides me with this type of ramping fix.

Hapless Researcher, Enclave Cryptologist, and Faerie Mechanist are all blue bodies to tap that can also help filter down to the cards you're looking for, with Fabricate serving as the ultimate ender of games. Whether it's beating down with the likes of Wurmcoil Engine and Steel Hellkite, or creating an exorbitant amount of mana with Pili-Pala to power through a Masticore (of either variety) or Blue Sun's Zenith, you can choose your own destiny on the wheel of awesome artifact creatures. 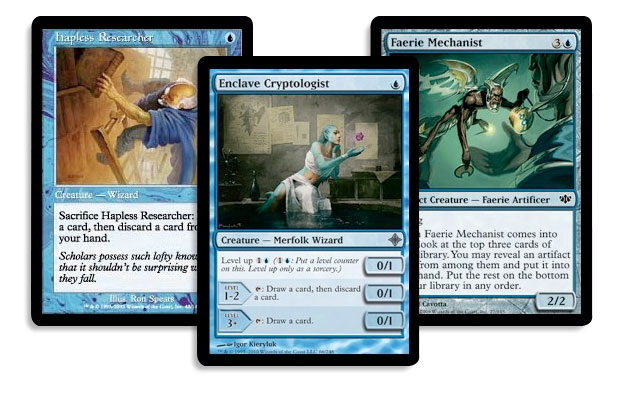 Caged Sun is exactly the kind of card that serves as mortar in an already solid construction. Not only is this an easy card to drop thanks to Grand Architect, once online it gets twice as easy to turn everything blue and hit even harder. And unlike Gauntlet of Power, there's no worry of splash damage in helping your opponents and their Islands.

Perhaps the sneakiest trick in this deck is with a card from our first trip to Mirrodin: Neurok Stealthsuit. Granting shroud is a fairly uncommon ability for Equipment. It's a handy defense against the usual kill spells that can run your plans ashore. This piece of hardware, however, comes with the ability to shuffle about your creatures at instant speed at the cost of

. Caged Sun makes every Island into a defensive sanctuary for your dominating robots!

Speaking of strong robots, for reinforced deck strength Phyrexian Metamorph can be either another blue creature or a copy of the epic artifact you just whirled out. (Pro Tip: You may be able to receive a super special version of it by checking out a New Phyrexia Launch Party!) 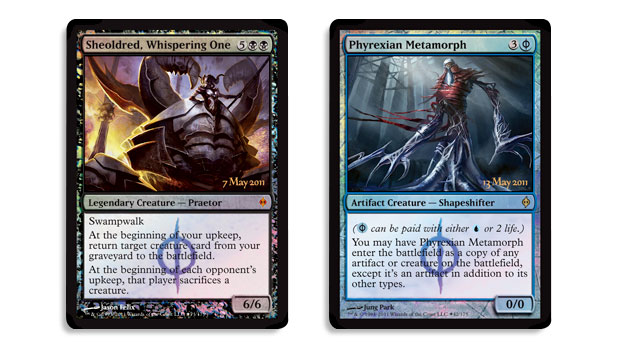 You Only Live Once

Despite the courageous work of Mirrans, like that from the Grand Architect above, the fact is the Mirrodin has drown in glistening oil. The Great Work is finally complete, and I for one am thrilled to have seen it through to the end.

While you're catching all the nifty angles featured in the Card Image Gallery, remember that the first opportunities to actually join in the excitement are at Prerelease Events May 7 and 8. Whether it's as a Mirran looking to continue the resistance or a Phyrexian basking in the glory of victory, there's nothing like jumping into the latest at your local game store.

Join us next week when hunger strikes hard. See you then!