any years ago, Mark Rosewater introduced the three psychographic profiles of Magic players to the public. You can find the article here and the follow-up to the article here.

If you already know about Timmy, Johnny, and Spike, just jump down to the next section. 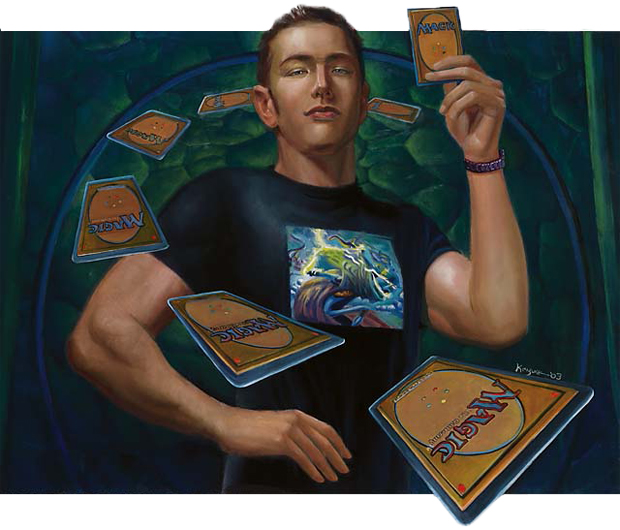 All Right, Now Let's Get Started!

Of the three psychographic profiles, Johnny has always been the most interesting to me. Spike is easily understood. I get why people are Spikes. The drive to succeed is commonplace. The goal of the game is to win. It makes sense that some people are going to bring that drive to a point where they want to win the game and several games to win tournaments. Timmy is also straightforward for me because I am primarily a Timmy. I love the big effects and crazy plays. There are plenty of times when I've looked at my cards in hand and knew the best play was to do nothing, but instead opted for the fun play that would rain craziness down on the game. There isn't a Timmy out there who doesn't love a kicked Rite of Replication!

Johnny is a little different. I'm jealous of Johnny. The Johnny in me is satisfied by building decks that have curious interactions, whether I think they'll win or not. My problem is I don't see the wild interactions a true Johnny sees. I wish I did. I love the wild, out-of-the-box ideas that develop into these crazy interactions and I wish I could do it. Perhaps if I spent more time perusing the cards I would be better seeing those interactions, but I don't and I'm not.

This struggle makes me particularly aware of Johnny and what they bring to your playgroup.

Johnny is going to bring something unusual and unknown to your games. Some groups are a little more cutthroat and understand that the unknown can be dangerous. This negative aspect of being a Johnny is very group-dependent. For these groups, if you don't know if you need to stop something from happening, the response is to stop Johnny from doing anything, since there is a chance that Johnny will disrupt your plan. If Johnnies are in this type of group, they rarely get a chance to see their ideas come to fruition since they need to be able to stop several people from killing them in every game. For Johnnies in these groups, the only option is to consistently run ideas that are interesting to them, but harmless to most of the group. This is a significant limitation on any Johnny.

Another negative that overlaps the last one is that Johnnies' new and different decks each week tend to draw attention from everyone in the group. When the Johnny in your group plays Strionic Resonator the first time, everyone sits up and pays attention because bizarre things are about to happen. Being a Johnny draws the attention of the group, which invariably means that he or she will likely be attacked more often, irrelevant of whether your group is more cutthroat or not. The Johnny might not be doing anything that disrupts your deck, but you are aware of him or her and more alert to what the Johnny is doing. When you are more aware of a particular player's actions, you are more likely to respond to his or her plays.

Remember what I said about how some playgroups attack Johnny because his or her unknown decks can jeopardize their paths to victory? Other playgroups are less cutthroat and want to see what Johnny is going to try to pull off. These groups make being a Johnny a little easier. My group lands somewhere in the middle, but we lean toward wanting to see what will happen. I mean, do you want to see fireworks or do you want to cut the fuse? 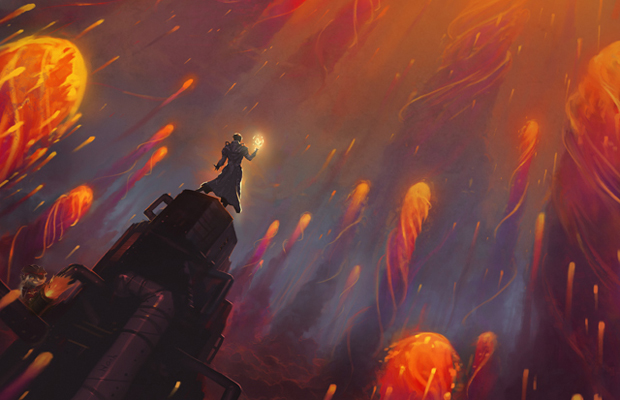 Look at the pretty fireworks!

Another benefit of being a Johnny lies with the ever-changing new decks. So many players build new decks so infrequently, their opponents build new decks with those older decks in mind. Soon enough, the players who rarely change their decks find that the metagame is stacked against them. Johnny never has that problem since Johnny is constantly changing his or her decks and building brand-new ones.

By constantly changing decks, it also makes it impossible for opponents to predict what Johnny is playing. Johnny sits at the front of your group's changing metagame, altering it with each new deck. Johnny doesn't change decks in response to the metagame in your group, Johnny changes decks and forces the group to change its decks in response to the new deck environment Johnny is creating.

Another benefit to being a Johnny is in relation to the downsides I mentioned earlier. Most Johnnies don't care. Johnny isn't worried about winning as much as others are, so drawing some extra attention is just fine. As a Johnny, you would prefer that the other players give you a chance to make your deck work, but the losses really don't matter. The goal is to demonstrate interesting interactions; to show how your bizarre mind finds connections that no one else sees. Winning is nice, but not absolutely necessary.

All of this begins to give you some idea of the importance of Johnnies to your play group. Johnnies prevent deck stagnation in your group. No Johnnies means that you are going to see the same decks again and again. By this I don't mean that you will only ever see the same exact decks again and again, I mean that you will not see innovation and significant change in your playgroup. A playgroup without Johnnies sees the same deck styles from the same players again and again. One variation of Jund for another variation of Jund is not a significant change. Shifting from White Weenie to a deck featuring Hellcarver Demon is a real change. Johnnies bring the change.

In my group, and for me in particular, this is a requirement. Too often, building a new deck is forced so low on the priority list that it just doesn't get done. Having a few Johnnies in my group forces me to come up with new decks and different ideas. Without them there, my new decks would be few and far between.

Johnnies also tend to enjoy being part of the playgroup. A regular game night means that a Johnny now has a regular opportunity to try out new decks and a chance to show them to an appreciative audience. Given the benefits of a regular play group, it isn't surprising that Johnnies enjoy being part of the group. This attitude is infectious for everyone in the group and only makes the playgroup better.

For me, the best part about having Johnnies in your group is seeing what's next. I love to see what great new ideas people come up with every week. This is a part of what makes Magic such a fun game for me. I love the moments in a game when something spectacular happens, and those moments happen far more often with Johnnies in your group. I would rather lose to a Johnny-made deck than some dull, unexciting list or some stock decklist off the Internet that had a couple of card changes.

One of the Johnnies in my playgroup is George. 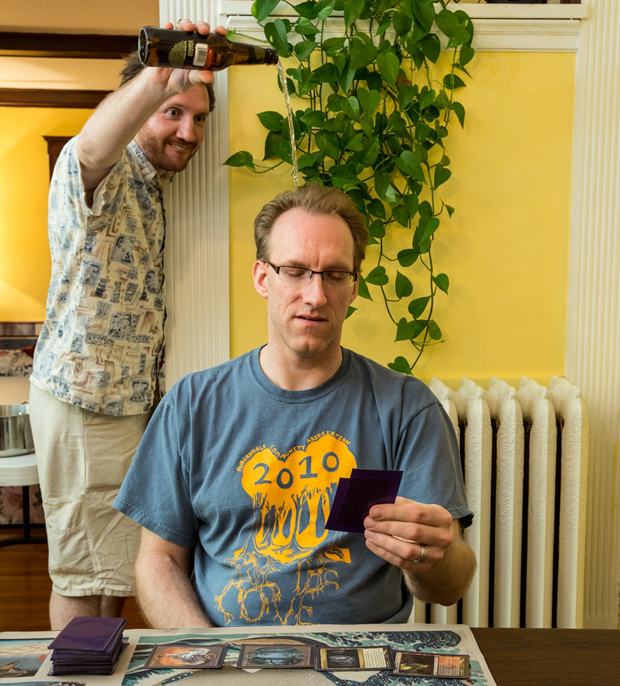 George is an interesting combination of Johnny and Spike, with a heavy splash of Timmy thrown in for good measure. When George started with our group he was excited for the chance to play cards that he doesn't get to play in most other formats (our group's decks are limited to Legacy-legal cards, so we include a wide range!). When George enters tournaments, he prefers the large formats, such as Legacy and Modern, that let him try different ideas.

Since joining, George has been a cornerstone of the group. His decks have caused our metagame to shift regularly. Ashnod's Altar, Reassembling Skeleton, Initiates of the Ebon Hand, and Blood Artist wreaked havoc for a while. Later, Hellcarver Demon and Doomsday, setting up Barren Glory, Planar Cleansing, Armageddon, and Final Fortune caused me great pain. George's current favorite deck is GU Blink Shenanigans.

The combo is slow by design. We prefer to avoid instant, easy combos so they don't ruin our fun. Besides, long and difficult combos are far more interesting when they go off. The benefit with this deck is that if the game runs into a stalemate, George's combo (Gilded Lotus, Deadeye Navigator, and Deceiver Exarch together generate mana and allow the other creatures to enter the battlefield repeatedly, doing all sorts of things) acts almost as an emergency exit from a game that has begun to drag.

George isn't just a Johnny, George is a friend. He can talk about most topics, comes through when you need him, has an interesting point of view on things, and enjoys a good laugh any time. He is easygoing and always fun to be around. These are great qualities for a Johnny, Timmy, or Spike.

Unfortunately, George has a new job in California. By the time you read this, George will be in a car driving across the country. While our group has other Johnnies and will continue to have wild games with bizarre interactions, we are losing a great Johnny and a better friend. Best wishes to George in his new job!