Hoof it the Easy Way

ngels! Demons! The torrent of hope and battle sweeps Innistrad! 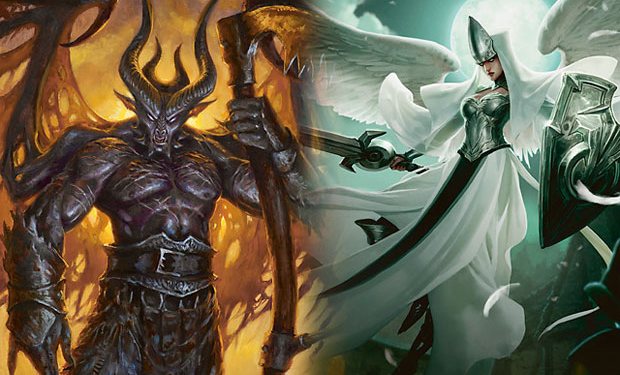 The forces of humanity have been reinforced, their potency revived by the return of Avacyn! 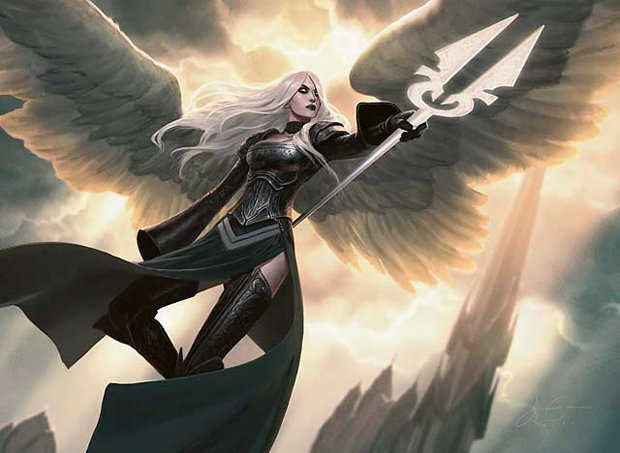 And now, finally, the great beasts of the land may roam free! 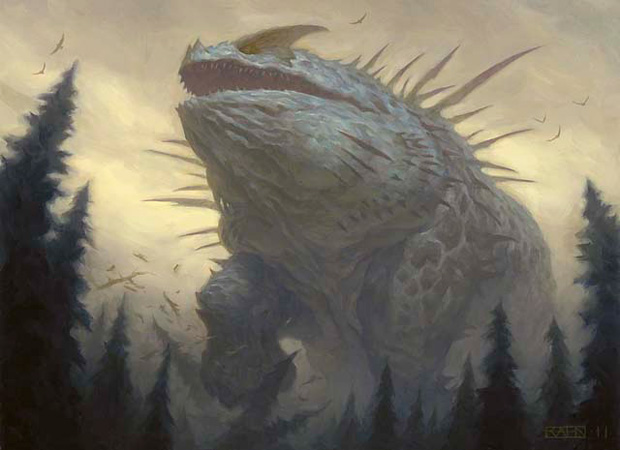 Yeah, I heard the skip of the record and awkward silence too. It's not exactly what I was expecting to see first in Avacyn Restored either. But can I tell you something? This is better.

You asked for it. Hold on.

So what is this Jurassic-esque monstrosity? Well, it's a member of the Bestia family.

As you can see, it's a green mythic rare creature. If you've already translated its name from the "official" species name above, bravo!

Craterhoof Behemoth is a beast of a Beast, carrying an eight mana cost for something big. Right?

Well okay. There's an ability too.

That gives us this magnificent piece of nature: 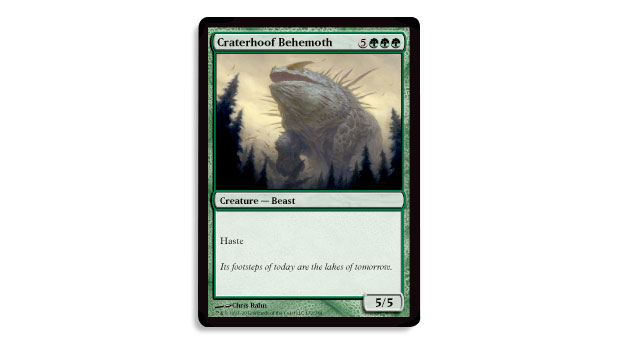 A 5/5 with haste for eight mana might not light your fire, but it's certainly crossed the threshold of "Commander Sized" creatures. The obvious question is then, "What else does it do?"

Want to play a game?

I'm going to give you three options—choices if you will—that you can make. If you guess correctly, the preview is yours to see in all its glory! 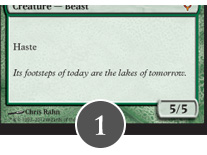 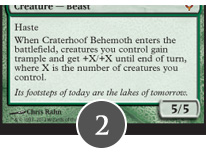 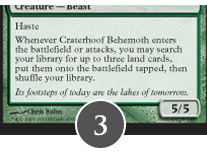 Your sense of imagination and discovery leaves much to be desired. Craterhoof Behemoth is much more interesting that that! 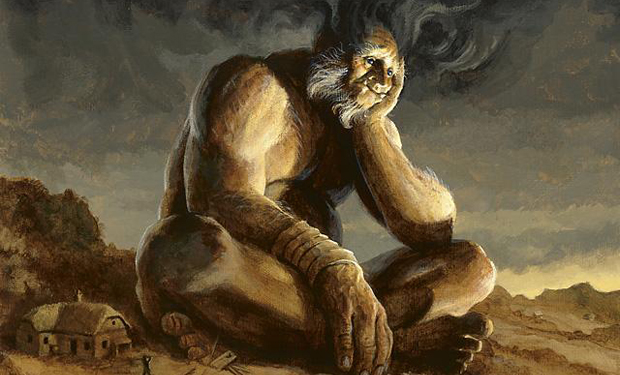 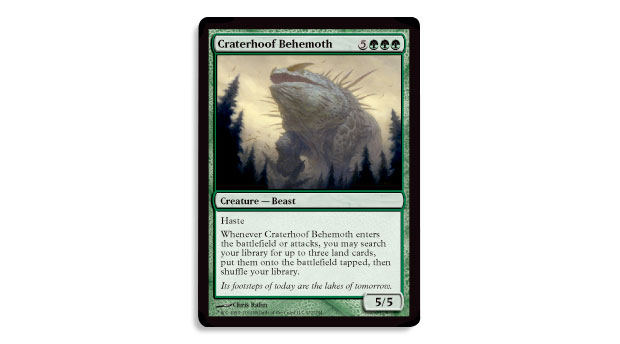 This card is awesome. In fact, I would guess that it's too awesome. Primeval Titan is already an incredible force in Commander and Standard, and upping the land searching to three would only amplify the issues it creates. We already fight over the original—through copying, recurring, searching, stealing, and otherwise trying to trigger it as often as possible—so having a "second" copy that does more is not particularly exciting for me (as incredible as that trigger would be!) 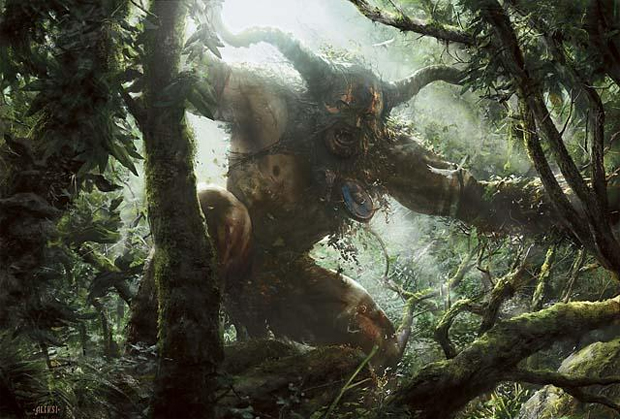 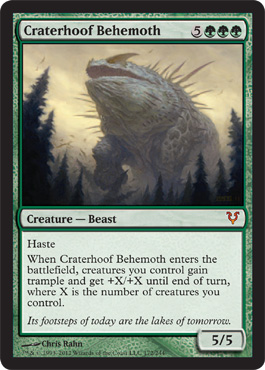 Boom! Your blockers are useless. Your life total is irrelevant. Craterhoof Behemoth is arriving, and this is your only warning!

A Tale of Two Saprolings

Let's look a little closer at the text:

By itself, entering as a 6/6 with haste (and ending as a 5/5 thereafter) isn't breaking any battlefields. Thornling laughs at this noble effort. No, what makes Craterhoof Behemoth incredible is what it means to creature decks everywhere.

The father of all Overruns has arrived.

Since our trigger relies on other creatures already in play, let's look at a handy chart to show you exactly how awesome this is.

The nearest comparison to Craterhoof Behemoth is Overwhelming Stampede, but I already like the Behemoth better: it gives you a creature to work with! (And Overwhelming Stampede is certainly an appealing follow up.) I'd venture a guess that it's far easier to make a swarm of small fries than it is to keep a swarm and a large-sized one too.

And thanks to our efforts toward token-focused decks, here's a snapshot of things that make tokens:

There are, of course, a few standout cards here and beyond that make the most of Craterhoof Behemoth.

Endrek Sahr, Master Breeder is already a favorite of mine. Two parts engine, one part easily recurred, Endrek has often been the surprising source of power in our Ghave, Guru of Spores deck. Craterhoof Behemoth happens to have a pretty nifty interaction with him:

I'm pretty sure I'm going to be getting my hands on one at an Avacyn Restored Prerelease event so I can slam it into our deck!

With some card-drawing power (and a little luck) it's possible to completely shatter a table in one shot with Hypergenesis. Some combination of "things that grant creatures haste" (Concordant Crossroads, Fervor, Fires of Yavimaya, Madrush Cyclops, Mass Hysteria, Urabrask the Hidden), "things that make tokens" (Cloudgoat Ranger, Deranged Hermit, Geist-Honored Monk, and half the list of stuff above), and Craterhoof Behemoth will simply end the game.

Granting haste to tokens lets us make them the same turn we want to cast Craterhoof Behemoth. This is handy to dodge some of the battlefield shenanigans other players might be packing.

If you have enough lands in play to cast Avenger of Zendikar, you'll make plenty of Plant tokens. If you make plenty of Plant tokens, you'll want to attack with them. If you want to attack with them, Craterhoof Behemoth gives you a way. Similarly, Ambush Commander turns lands into creatures straight up. If you've had them out for several turns, they won't need any haste added! 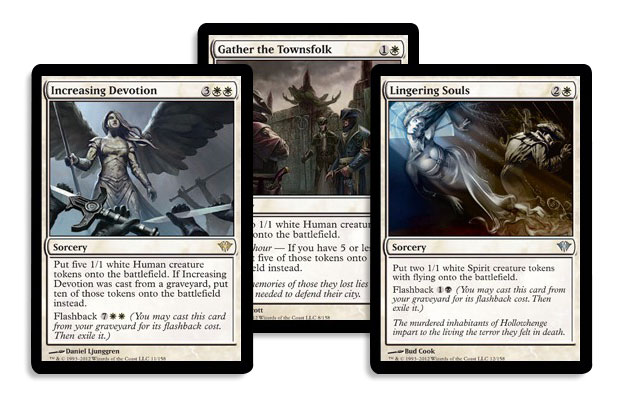 Of course, you don't need to look far for things that make a Craterhoof Behemoth shine. The battlefield-rallying cards of Dark Ascension—Gather the Townsfolk, Lingering Souls, and Increasing Devotion—will quickly provide the density of dudes desired, mana requirements notwithstanding.

It's easy to see that Craterhoof Behemoth slides into creature-heavy decks without skipping a beat. What struck me most about our Beast is that I began to consider ways to use it even better. I've shared my love for Vanguard before, and I realized that it's been some time since we looked at piling up ways to play. With the new release of Planechase (2012 Edition) around the corner, a refresher in awesome is in order.

Yeah, I'm talking about the headache-inducing Vanguard-Planechase-Archenemy-Commander option. Let's do this.

From Vanguard, it would make the most sense to help cover something we could really use with Craterhoof Behemoth. While Karn (our noncreature artifacts are creatures too), Ertai (our creatures have hexproof), Sisay (our lands tap for twice the mana), Sliver Queen, Brood Mother (we can make tokens anytime), and Mishra (our creatures deal double the damage) all provide something useful, I believe Tahngarth (our creatures have haste) will serve us best. This keeps us from having to include any haste-granting effects within our deck.

Now we're in the harder part.

From the original Planechase wave we can craft a Planar Deck that makes tokens and Behemoths at home.

All of these planes offer things Craterhoof Behemoth wants. From Velis Vel and Goldmeadow (making more, stronger tokens) to Isle of Vesuva and Turri Island (helping us cast our guy or giving us a second copy when we do), our pick of planes is pleasing. I'm looking forward to the new places we'll soon see! 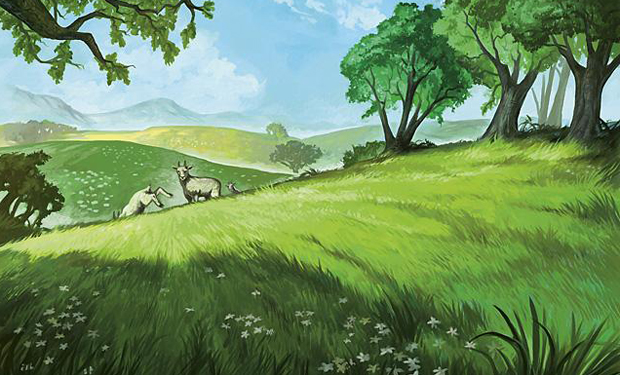 And since my local troupe of players is absolutely off their rockers, we layer Archenemy on top of everything else.

1 A Display of My Dark Power
1 All in Good Time
2 Choose Your Champion
1 Dance, Pathetic Marionette
2 Evil Comes to Fruition
2 Introductions Are in Order
1 My Crushing Masterstroke
2 Roots of All Evil
2 The Dead Shall Serve
1 The Very Soil Shall Shake
2 Your Fate is Thrice Sealed

What are we scheming? In this pile we have token making, creature stealing, and a few oddball effects to round out the mix. Being evil is decidedly excellent, and a running requirement when everyone else is dropping haymakers too.

If you've had these wonderful ways to play collecting dust, it's time to see how everything new keeps changing how we look at everything old!

While it's easy to dismiss Craterhoof Behemoth as "just another big, dumb creature," I think there's plenty of things to do with it that will leave opponents smarting. And while it's a little early to foresee how Avacyn Restored Limited will look (and certainly the domain of new-to-Wednesdays Steve Sadin), I hope I can unlock a "Stalemate Break" achievement by casting our Behemoth fatty.

Really, who wouldn't want to do that?

Since we've had some previews roll out last week and yesterday—check out the Avacyn Restored card image gallery for the latest updates—it's only fair to check on first impressions!

Being the biased source that I am, I can't believe some of the stuff I've seen so far (Kaalia of the Vast with Avacyn, Angel of Hope makes me shudder at the coming Commander battles!), so I'm hoping to hear what's got you fired up too!

Join us next week when something miraculous happens!