How to Win Friends and Influence Games

ultiplayer Magic is on a whole different plane from the usual duel variety. Facing just one other player excludes a lot of things present in gaming in general, the most important of which is genuine cooperation. How can you work with your opponents when, at all times, they are your opponents?

That's the beauty of multiplayer: just because you have to beat them to win doesn't mean they're your opponent the whole time along the way.

While there are certainly strategic implications in being a well-liked player in a game, today we're going to dive into how you get to that point initially (including what you shouldn't be doing, either). While I won't take credit for Dale Carnegie's work, some of the principles outlined by him create an excellent framework when applied to Magic.

Fundamental Techniques in Having Fun

Let's start with the most basic of elements: you have to be liked to be considered fun. Every player likes slightly different things but, at the core, each of us craves very similar experiences. 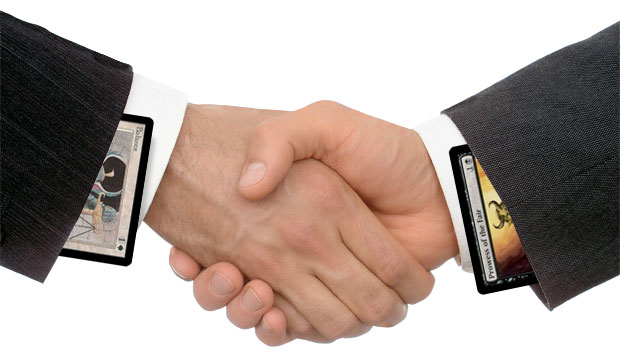 1) Critics and complainers can stay home.

No one really enjoys misery (despite how it may enjoy the company). Verbal clamps and jabs about whatever is going on don't earn points across the board. While some players may agree with your assessment, negativity doesn't frame pleasure very well.

Having a different opinion is fine, but there are ways to present it that aren't edged to knife into other players. The idea here is one that can be compared to optimism versus pessimism; rather than even mention things as detractors a more positive approach is desired.

And if you shouldn't drag a table down, what's the right way?

You might not like everything your opponents do. In fact, with as many cards and interactions as there exists in Magic the odds are pretty good your fellow player will dish out something with a taste you don't like. Instead of approaching the negative—criticizing or complaining about it—seek out the positive.

A big, huge dude drop onto the battlefield to say "Hello!" to your face? An enormous spell just fired a salvo that completely upended the game? Whatever it is that just made the other player's world an exciting place, find a facet (even just a tiny one) you like about it. Sharing what you liked, and why, is a clever way to both reinforce a social bond and avoid sticky, detrimental situations.

So if we're going to be talking about what we like, and avoiding what we don't, what's the end goal?

3) Get them hungry for more.

The secret to influencing other players is, once things are firmly on the positive side, to gently encourage and reward other players' desires.

Do they like big creatures? Give them a spare Forest through Yavimaya Dryad. Artifacts happen to be their bag? Leave Viridian Corrupter and Indrik Stomphowler on the sideline, or set them to other targets, for a few games. Other players won't take too much time noticing they like playing with you more; they get to have some of their fun every time they do! 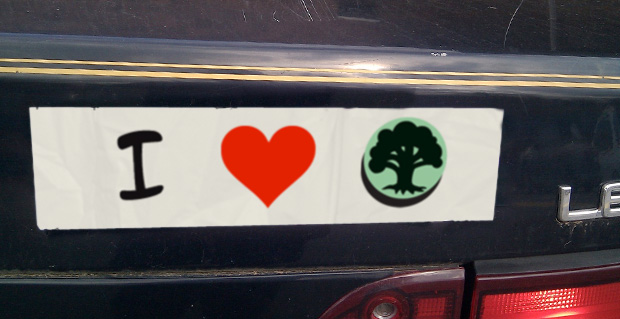 Getting them eager to play more creates an implicit trust. They may not realize it directly, but if they like you playing in games and you feed and lead them to playing more of what they already enjoy, they're going to want to keep you around and will be much more receptive to your thoughts.

Being "the good guy" is a hard-earned but valuable position.

Six Ways to Get On Their Good Side

Being the good guy is often underrated and overestimated. Thanks to the heroic shenanigans featured in movies and other media, we often think of the most beloved as only those who seem perfect: always cheery, never dull, and willing to go to bat for you purely for altruism itself.

The fact is that you don't need to be a saint to be well-liked in games, just apply the right stuff where it counts.

1) Have genuine interest in others.

Most of us, given at least a little time, can smell a rat a mile away. If you're going to say something, make it something meaningful. As we're not being negative—so long as we can possible avoid it—that means statements should be in the positive.

A scary creature that is about to eat a player or two isn't "Hey guys! We have to kill this thing!" but "Wow! That guy is solid!" Drawing attention to something can go like this every time; complimenting the player who is enjoying it should help tip off the table to checking it out a little more. 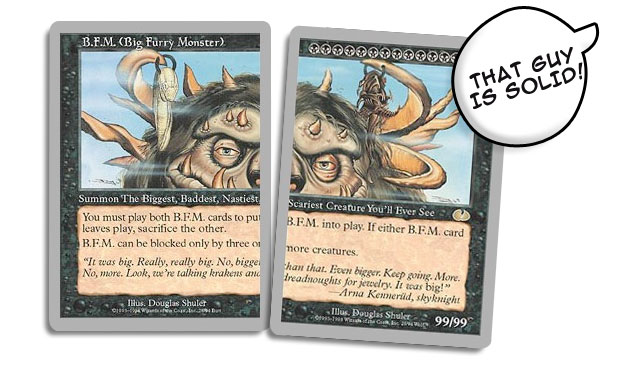 This also means that it's in your best interest to pay attention to everyone else. While there's something to be said about never missing a moment of games, seeing what everyone is doing and keeping that in mind during discussions sets up much more beneficial situations than not. I know I've missed what someone had played, only to see it later and react a bit loudly.

Guess who also didn't take very kindly to that?

2) Focus first on grins, not wins. 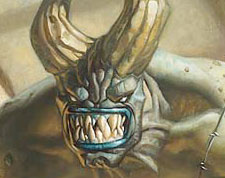 A simple smile can say a lot. Often, all it takes is a gentle smile to be put more into someone's good graces than distrust. Grimaces, scowling, and "poker faces" all put other players at unease. While there are numerous clichés around how much communication is nonverbal rather than verbal, the fact is that your facial reaction (and other body language and activities, like sighing heavily) will be read stronger than your statements.

That means you need good spirits, and at least a little humility, in the games you play. This is hard, and it's something I really struggle with myself. But the payoff—how other players enjoy you as a player—is worth the investment in yourself.

3) Know their names. Use them often. 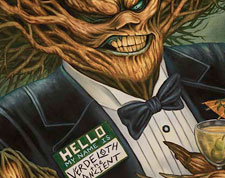 Another topic that I really struggle with is recalling names. Everyone has an official name, but more often than not we have preferences around how we individually like to be referred to. Following through with that creates harmony with another player.

For example, you all know my name is Adam Styborski. And while many players around the local shop (and through the Internet) call me Adam, it isn't actually my preference. My Twitter handle (@the_stybs) hints at my nickname: Stybs. My first roommate in college derived this for me, and it's stuck ever since.

Players who call me Stybs invoke some of the feelings and memories—all pretty awesome—from college. It's no surprise that I generally like these players better without even realizing it at the time. And a few clever fellows will ask me for favors using my nickname even if they've already been using my real name.

Just as when you know someone doesn't like being called a specific name makes them angry and creates dissonance, using the right one makes them happy and creates trust. While every sentence doesn't need to involve a name, regular use throughout the game keeps the feelings of familiarity strong.

4) Listen, and put the topic on them. 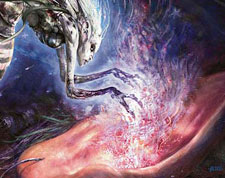 Most of us love to talk about ourselves (see the above paragraphs). It's no secret that given the right prompting, most of us would be very content to discuss all the things that interest us personally. Getting others to discuss what they want to discuss anyway helps put their mind at peace. It feels good to get into an enjoyable discussion; you can always create an enjoyable one just by following up on what they like.

Ask about the decks they're playing, their other decks, or the cards they like most. Ask about non-Magic topics that they bring up, like food or travel. Let them steer the conversation in as much as they continue to offer items to discussion. Not everyone is a great conversationalist, but all of us have something to open up about.

The only way to do this is by taking a genuine interest in them (see what I did there?) and listening to what they share. Sometimes you'll only hear a hint of what they love; you have to be caring about them to catch it when that happens.

5) Use their interests for discussions.

So what if the tables get turned a bit? If they ask what you think about something, how do you keep from rambling on or taking over? Simple: frame your discussion around them. If you asked about favorite cards and they answered then tossed it back, make your answer too but ask a follow up on a card you have in common, or that they like distinct from you.

Imagine the conversation is like a game of Hot Potato. Yes, you're going to have the potato in hand from time to time; by keying into the things others are interested in your find yourself without the potato often enough.

Just talking and keeping the topic in others' domain doesn't do the whole trick. While it keeps things positive and draws players in, doing it just for the sake of doing isn't going to cut it for long. Find the common traits and overlaps between you and others, then build from there.

No one likes to feel used or abused, and playing a game in conversations will result in hurt and distrust among your group. There's a reason you sat down with these other players. Keep that at the forefront of your mind.

Does building your character and becoming the kind of player described by the features above really generate good-will and friendship? I stopped in my local card shop and asked some of the regulars the following questions:

Many of the answers overlapped in some ways, and should sound familiar. A good player to play with:

Some of the people I asked flipped the questions around and shared things that they felt make a player bad. They said that they hadn't enjoyed playing with players who:

It's easy to get caught up in looking at things like "skill" and "competitive ability" as the building blocks of a good player. However, neither of those concepts address what all of us want: someone who makes a game of Magic feel good.

Other angles of describing "goodness" in players aren't mutually exclusive or contradictory to the qualities described today, but I believe strongly that it's these positive characteristics that are more valuable to us all in the long run.

If you want a real mental challenge, try changing your entire demeanor for the better. It's an incredible mountain to climb on, one that I'm sure I'll never quite finish.

Join us next week when we sort things to find some commonality. See you then!