There were dozens of words to describe the movement of the creatures in the Tangle. None of them applied the Phyrexians. Anything touched by the invaders became something different, something alien.

The Tangle had always been dangerous, never a place that was mastered or civilized. To be within the Tangle meant freedom: there were no shackles of government or bureaucracy, of prosperous or pauper. Those that lived lived. And the rest... didn't. 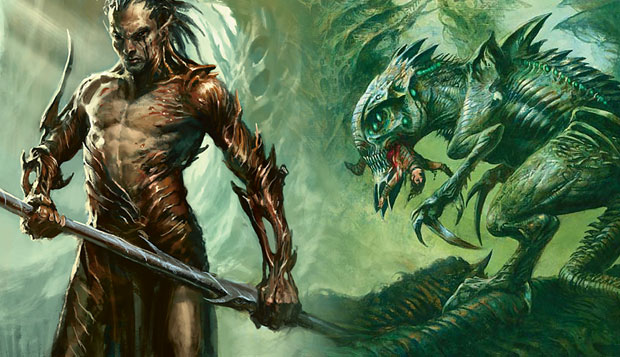 But as free from the ways of the confines of "civilization" as we were, so too were we prisoners of the nature of the Tangle: it was never truly safe. The fangren were predators second to none. Massive and magnificent wurms were hardened, devastating, and above all deadly. And the tyrranaxes roamed proudly for they, too, could devour most other creatures whole.

Survival meant living in your place in the order. Prey would always be caught but the best prey, us, were always evading. Sylvok or Viridian, ouphe or troll, it didn't matter; if you had intelligence you kept where you belonged: out of the way.

But that time has passed. These predators now are something beyond those that were here to start. No longer are they satiated when feeding. In a seemingly endless hunt, they move and move into every nook, for every morsel they can find, at every hour of day and night.

They possess an impossible hunger.

Why we returned, even as swiftly and briefly as we could, is something I didn't fully understand. But the maw of teeth rising below me was impossible to misinterpret.

Whatever corrupted the Tangle has left no room for the weak, and in my last moments I knew what weakness truly meant.

elcome to the second New Phyrexia Preview Week! We're quickly approaching our formal introduction to the new face of Mirrodin at this weekend's Prerelease Events, and the anticipation I have is approaching a fevered pitch. I'd be worried that it's actually a budding Phyrexian infection, but since I'm already a convert it can mean only one thing: game time.

Prerelease weekend is always an exciting time for me. At the Mirrodin Besieged Prerelease, I hit the luckiest Sealed pool I have ever opened. When Scars of Mirrodin rolled into town, I discovered the surprising potency of proliferate, something I had initially dismissed. Magic 2011 was the Prerelease where I finally felt I had nailed building a deck.

Every few months I have something to look forward to that feeds my need for fresh Magic while showing me something more I wasn't expecting. Personal discovery is a concept I really get behind, and there's always a staple of features to adventure out for:

I've also mentioned it, before but I feel it's always worth the reminder: new cards from the latest set are fair game for Commander as of that set's Prerelease. I, and many of you, adore Commander, and the biggest reason I head to multiple Prereleases is to find all the cards I'm hungry to have.

In New Phyrexia there's one card in particular that I'm the most hungry for: Vorinclex, Voice of Hunger. 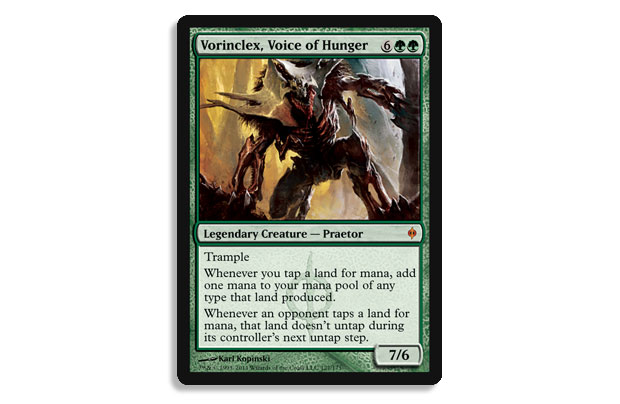 The Teeth of the Predators

Vorinclex is a Praetor, a member of the highest echelon of the Phyrexian hierarchy, but that's secondary to its outlook on the world: only the strongest may survive. Predation—true survival of the fittest—is the driving force behind the green-mana face of New Phyrexia, and I heartily accept this approach. 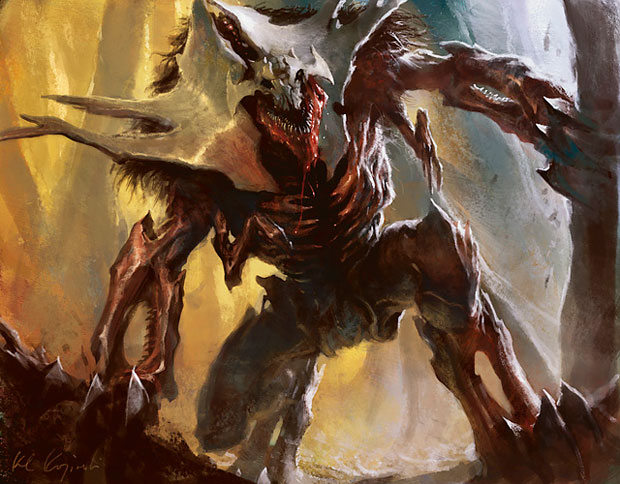 Historically, for myself, it's been Kamahl, Fist of Krosa that has been my mean green Commander of choice, but Vorinclex makes Kamahl seem meek. Praetors mean business, and business is good (evil).

I have an admission: I'm weak. My teeth are for chewing. My feet are too soft, my body too heavy and frail. As shared in Savor the Flavor last week, being green in New Phyrexia is more about predation than intelligence, power than finesse.

And if I'm planning on finding cards I'm after I might as well consider a deck I'd put together with them.


The natural order of things in preserved here. Wirewood Guardian, Growth Spasm, and Krosan Tusker all provide access to more lands and mana early in the game. Fierce Empath can find both the Tusker and Guardian early enough to continue hitting land drops, but Brutalizer Exarch also taps into a bevy of predators to deploy, like Woodfall Primus or Vorinclex himself.

Throwing creatures into the graveyard to play lands seems a little strange, but Deadwood Treefolk helps bridge the gap, and Primal Command provides a quick shuffle too. Beast Within pulls anything in your way onto the battlefield of combat, and Lurking Predators will surprise your opponent with a new predator fairly regularly.

It's a simple deck that feeds my boundless hunger for big dudes and attacking. But there's a darker side to New Phyrexia, and it feeds something I struggle to keep buried far away from the games and events I join.

Just as "Phyrexia Is for Lovers," one can safely surmise that New Phyrexia is for griefers.

Brian David-Marshall shared some thoughts around Jin-Gitaxias, Core Augur last week and those thoughts tended towards the powerful effect Jin applies to your opponents. Tom Lapille reiterated it as well, pointing out that New Phyrexia is packed with "all-upside griefing" to, ah, delight your opposing players.

I try to keep my not-always-conducive-to-building-an-open-play-environment tendencies hidden and suppressed. Certainly griefing opponents isn't on a list of objectives for building relationships with other players. I've even been prone to pointing out the feeling of unfairness that is sown by effects and interactions that block players from achieving their goals.

But sometimes the hunger to be overpowering is too much to restrain.

More Than You Can Chew


This is a pretty rough deck but that's all I was aiming for: a figurative way of expressing the truth of Phyrexia. I was going to dub the deck "Pure Hatred" and play off of the old-school card Hatred's flavor text:

I will flay the skin from your flesh and the flesh from your bones and scrape your bones dry. And still you will not have suffered enough."
—Greven il-Vec, to Gerrard

But this goes beyond what Greven's feeble-minded punishment entailed. Jin's here to do his thing in stripping hands away. Vorinclex is a roaring mana source to empower dominating Genesis Wave explosions while simultaneously punishing any who dare cast spells (Rhystic Study) or pay for the right to attack you (Propaganda). Urabrask the Hidden not only speeds up the Phyrexian attack, but slows down opposing resistance, something that Frozen Æther does as well.

Like other Genesis Wave into attacking-for-massive-damage decks, a package of creatures provide the mana fixing and filtering required to Wave hello to the future. And for good measure I grabbed a Feldon's Cane to recycle the graveyard if needed.

This deck is something I consider even more brutal than the Massacre Wurm deck cooked up previously. Your opponents will see it coming but be powerless to stop it. As Praetors come online, options dwindle. The dawn of New Phyrexia will be the twilight for a few more friendly games.

I will be sorely tempted to drink up those delicious, delicious tears.

One of the coolest features of Prereleases, and all Magic events in general really, is that you might pick up some fresh booster packs as prizes. After a weekend of slinging cardboard I usually find I'm left with a few prize booster packs. There are a few ways to play with just a single booster pack, Pack Wars being a pretty common route, but I recently experienced a slightly different Limited format. 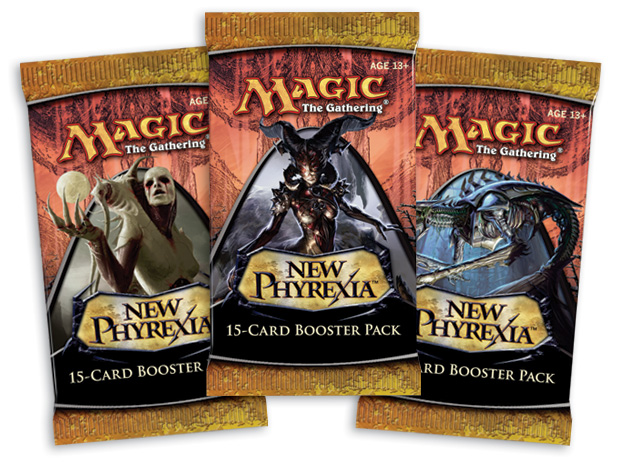 I'll be slinging spells and indulging in more than a little New Phyrexia goodness around Columbia and Baltimore, both cities in Maryland, all this weekend. Even if you're halfway across the world I encourage you all to trek out to your local Prerelease and see the Phyrexians in action.

If you do happen to end up with a few packs and decide to try Type 5, I'd be very interested to hear your experiences. I'll be angling to explore more all weekend long, and I sincerely hope you'll do the same.